Constructed between 1835 and 1837, this is the second oldest remaining Roman Catholic church in Manhattan and was recognized as an official city landmark in 1966 by the New York City Landmarks Preservation Commission. The church was dedicated by Bishop Dubois in 1836 and is constructed of fieldstone with a Greek revival brownstone façade. In recent years, the church has been preserved by members and also saved from a devastating fire in 2011. The congregation has also merged with both the Parish of St. Joseph St. James and the Church of the Transfiguration in recent years. 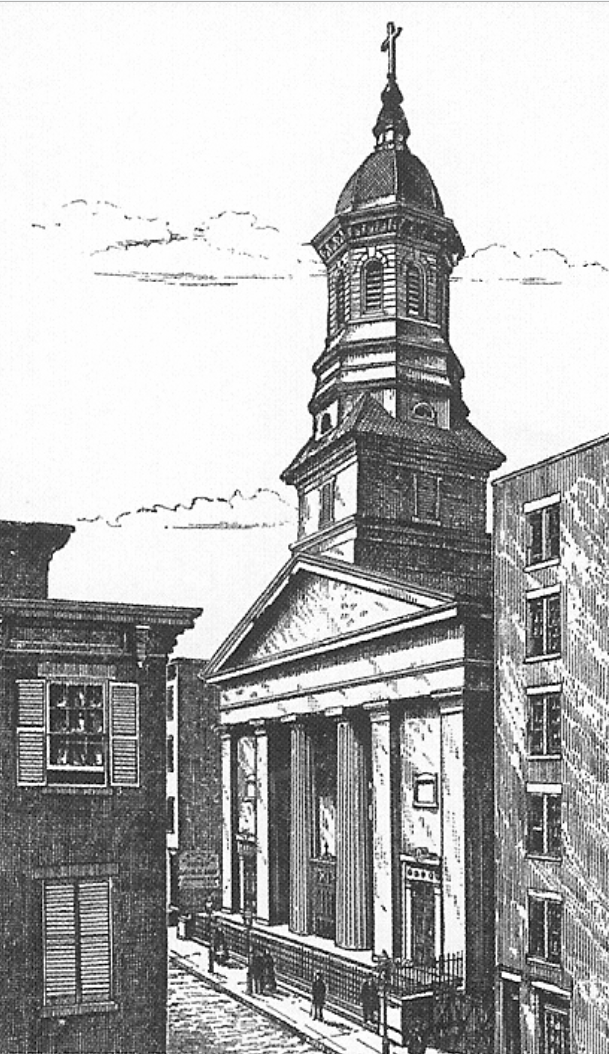 The building’s façade is similar in design to those of architect Minard Lafever; however, its actual designer remains unknown. The original structure is not entirely intact, as the earliest incarnation of the church included a domed cupola above the roof. St. James’ was built on the foundation of one of the neighborhood’s earliest breweries. The Church later championed the Catholic temperance movement in order to end alcohol abuse. The Church of St. James cared for the poor and indigent in the community, including many who contracted cholera (several priests contracted the disease and died shortly after their patients).

St. James’ served an area of lower Manhattan primarily made up of Irish immigrants and was home to several notable parishioners including Alfred E. Smith and the Ancient Order of Hibernians. Smith was an altar boy in the church and later served as Governor of New York, going on to become the first Roman Catholic candidate for president. The Ancient Order of Hibernians was a fraternal group originally established in Ireland that organized their first chapter in the United States out of St. James' Church in 1836. Following acts of violence against Irish clergy and the burning of St. Mary’s Church, the Hibernians felt the need to band together. The burning of St. Mary's Church was part of broader, overarching hostility towards Irish immigrants in New York at the time (the ongoing hostility between Catholics and Protestants in Europe was beginning to reveal itself in the States as well). The largest membership of Hibernians is no longer found in Ireland, but in the United States.

In 1983, the roof of St. James was dangerously close to collapsing and in need of financial repair. The Hibernians financed the restoration of the church roof after New York City officials ordered it closed. In 2009, two volunteers (John Perry and George Zapata) put in significant effort to help restore the church, refurbishing the walls, refinishing the oak doors, and plastering and painting the ceiling. On January 11, 2011 firefighters saved the historic church from ruin after a 90-minute battle with a blaze that started out in the attic. In 2014, St. James’ merged with the Church of the Transfiguration on Mott Street.

Not only is it important to be an engaged citizen in your home town but as we go off to college it is important to also be civically engaged in our new communities as well!