Melrose Plantation, also known as Yucca Plantation, is a National Historic Landmark in Natchitoches Parish in north central Louisiana. This is one of the largest plantations in the United States built by and for free Blacks. The land was granted to Louis Metoyer, who had the "Big House" built beginning about 1832. He was a son of Marie Therese Coincoin, a former slave who became a wealthy businesswoman in the area, and Claude Thomas Pierre Métoyer. The house was completed in 1833 after Louis' death by his son Jean Baptiste Louis Metoyer. The Metoyers were free people of color for four generations before the American Civil War. The Association for Preservation of Historic Natchitoches owns the plantation and provides guided tours. Some early twentieth-century traditions associated with the plantation, such as its first owner and origins of architectural style, have been disproved by historic research since the 1970s. An archaeological excavation begun in 2001 has revealed more evidence about the early history of the site, its owners and construction. In 2008, the state included Melrose Plantation among the first 26 sites on the Louisiana African American Heritage Trail. 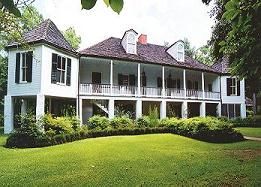