Shadows-on-the-Teche is a former sugarcane plantation that has been preserved and restored. Planter and original owner David Weeks became chronically ill while the plantation was still being built in 1834. His widow, Mary Weeks, remarried lawyer John Moore but kept her children's property separate from that of her second husband. This property included the 164 slaves bequeathed to their children under the terms of her first husband's will. The Shadows-on-the-Teche household was economically and physically dependent on Louisiana slavery. Mary Weeks and John Moore strongly supported slavery and supported the political changes which they thought were necessary to save it; in 1861, Moore was a delegate to the convention in which Louisiana seceded from the Union. This political status and viewpoint made the household vulnerable during the American Civil War. Federal troops requisitioned occupancy of the property, and officers of the occupying force quartered themselves in it. Mary Weeks died in December 1863 in Shadows-on-the-Teche while part of the house was being used by the Union troops as an officers' quarters. After David and Mary Weeks' son William F. Weeks had partly restored the family fortunes during Reconstruction, the Weeks family's status further declined during the third generation of family owners. The Weeks-Hall family was compelled to sell off much of the land surrounding Shadows-on-the-Teche to meet their living expenses. 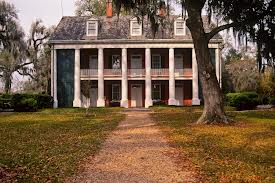