The San Marcos Hotel, across the street from the Suhwaro Hotel, was a huge success. The new town of Chandler found itself in need of additional hotel spaces almost immediately. Originally opened as an affordable option to the San Marcos Hotel, the Suhwaro was later used as a boarding house for San Marcos employees. The curving Mission Revival style façade imitates the design of the Alamo in San Antonio, Texas. 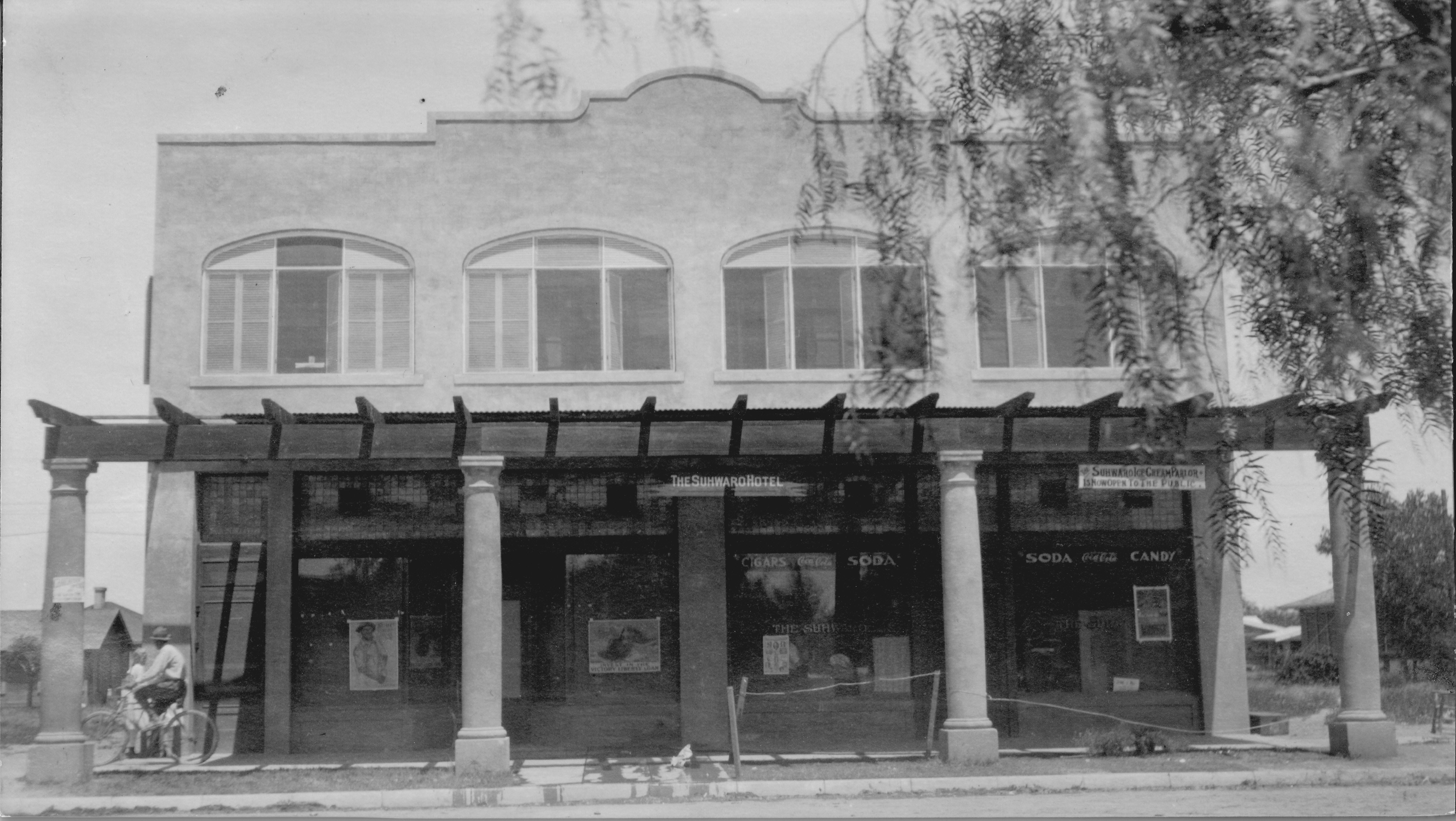 Have you ever been in Downtown Chandler and wondered what the Alamo-looking building on Buffalo Street is? It’s origins are tied closely to two other buildings in our city’s Downtown area.

The opening of the San Marcos in 1913 was a huge success. It was so successful, in fact, that within a few short years the town had a need for more hotel and recreational facilities. To meet the new demand, Harry J. Collis, the golf pro at the San Marcos who had designed the hotel’s links, and William H. Robinson, an author whose wife, Grace, was the first San Marcos general manager, planned the new building. They built the Suhwaro Hotel directly across Buffalo Street from the San Marcos Hotel lobby.

The Suhwaro was a two story building. The first floor was designed as a clubhouse with two bowling alleys, billiard room, ice cream parlor, and a refreshment room “where cooling but innocuous liquids will be served.” The second floor contained nine sleeping rooms and suites. Each room had a sleeping porch, and they all opened into a common “assembly parlor.”

The Suhwaro was designed by the Phoenix architectural firm of Creighton & McDonald. Creighton was a prominent architect in the Valley. He designed many private residences, most notably the Peterson House in Tempe, as well as Old Main on the campus of Arizona State University. Creighton and McDonald designed the Suhwaro in the Mission Revival Style of architecture, which is why it bears a resemblance to the Alamo. It is unknown why the hotel bore the phonetic spelling of “saguaro” as its name.

Ground was broken on the new hotel in April of 1916, with the hopes that it would be completed for the start of the tourist season that fall. W. P. Pleasant was the general contractor, with C. Harvey and Sons doing the brick work, D. H. Burtis the plumbing, Bertram Brothers doing the electrical work, and Burt Snyder doing the painting and decorating.

By the end of November the bowling alleys were being installed by Brunswick. The company boasted that there were few finer lanes on the West Coast than the ones installed in the Suhwaro. In preparation for the completion of the lanes, a bowling team was organized.

For several years, the hotel operated on a seasonal basis, with just a few rooms rented during the summer months, but full during the tourist season. To accommodate more guests, in 1919 the downstairs amusement center was disassembled and converted into more sleeping rooms. A portion remained for a “Native American basket room,” which claimed to have the best collection of baskets in the state.

Starting in 1924, Robinson leased the hotel to the San Marcos for housing for their wait staff. By 1937, the San Marcos purchased the Suhwaro outright. The Suhwaro hosted a number of businesses and enterprises, including barber shops, restaurants, a tire repair shop, and even housed the vintage car collection of John Quarty, a later owner of the San Marcos. After Quarty’s death, his widow, Angelle, became the sole owner of the Suhwaro. In 1993, it was acquired by former Chandler mayor Jerry Brooks, and he restored it to its original historic character.