In the store front on the left, brothers Albert and Luis Serrano sold clothing and shoes here until the late 1970s, when the independent department store was no longer sustainable. After closing Serrano's Popular Store, they opened a Mexican restaurant. Between 1920 and the 1960s, the building on the right served as a bakery and the popular Chandler Café. 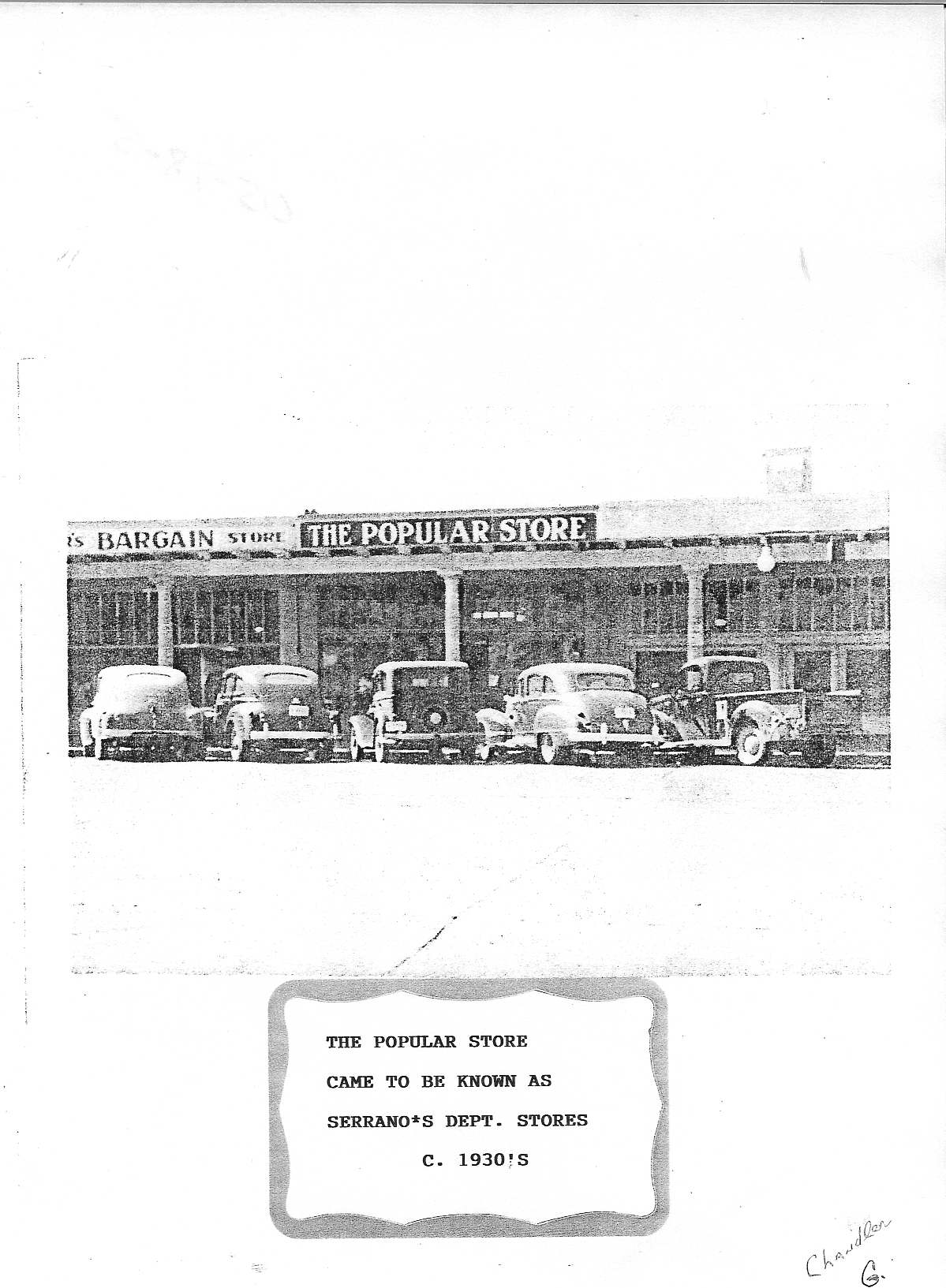 Serrano Family at a Restaurant Groundbreaking, 2005 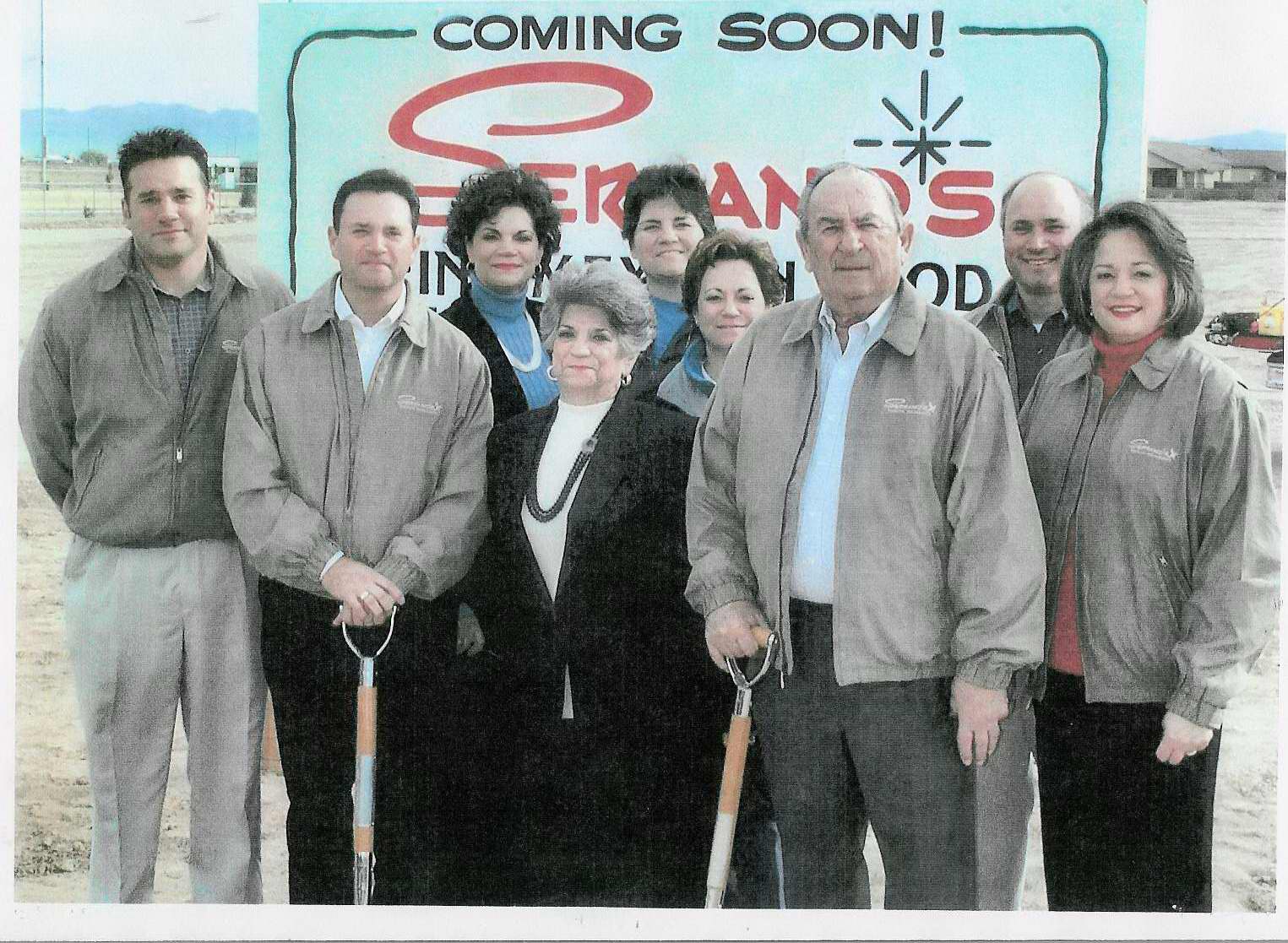 Family owned businesses like Bashas’ and Saba’s Western Wear have been at the core of Chandler’s economy. While some are still around today doing the same business that they always have, some have disappeared and others significantly changed. One of these family business that has changed with the times, but continues to thrive today and is the oldest family owned business in Chandler, Serrano’s.

The Serrano family traces its history back to Altar, Sonora, Mexico, where its modern founder, Luis Serrano, was an astute, successful businessman. Luis owned a bank, a general store, a stake in a gold mine, and ranch properties. When the Mexican Revolution broke out in 1910, he decided to send his family to Tucson for their safety, while he stayed in Sonora to look after his business interests. This arrangement lasted a year before he sold all his interests and joined his family in Tucson.

In 1919, two of Luis’ sons, Albert and Luis, left Tucson and headed for Chandler, where they intended to open a clothing store. They had heard Chandler was experiencing a development boom fueled by high cotton prices, and they wanted to be a part of it. Albert and Luis opened their clothing store, which they named The Popular Store, on Arizona Avenue just south of Boston Street with about $10,000 worth of stock. One year later, they moved into a building on Boston Street which would be home to The Popular Store for decades.

The Serranos prospered in the clothing business. In 1923 they expanded into Gilbert, followed a few years later by expansions into Casa Grande, Coolidge, and Mesa. The Serranos wove their business into the fabric of these farming communities by extending credit to local farmers when they experienced a dry season and the farmers weren’t able to pay their bills until the following year. These lines of credit were a welcomed assistance and helped many families get through some very tough years.

Albert sold the business to two of his sons, Ernie and Rudy, in 1959. Always looking for new opportunities, the brothers decided to expand the family’s business ventures by opening a department store. Located in Phoenix at 32nd Street and Indian School, this store quickly became a success as well. By 1969, after closing some of the smaller clothing stores, they opened an additional department style store in an old JC Penney building in downtown Mesa. The department store business seemed to be a good one for the family.

Unfortunately, the opening of Mesa’s TriCity Mall had a negative impact on the Serrano department store business. TriCity was the first enclosed shopping center in the East Valley. It boasted several large retailers as anchors, including two large national department stores. The Serranos couldn’t compete on that scale. According to a 2005 oral history from Ernie Serrano, Jr., “the Mesa store lost a lot of business to TriCity…..and it really put a strain on the business.” The Mesa store closed in 1974. Three years later the Phoenix store closed as well. All that remained was the family’s original venture, The Popular Store on Boston Street.

Fate took a turn for the better for the Serranos in 1979. Ernie Serrano, Jr., described what happened this way: “In 1979, my uncle Albert Serrano owned a restaurant where the Yorktown [Restaurant] was and he was complaining to my dad in the alley one day about really having a tough time. The restaurant had been vacant for a couple of years and he was paying the mortgage on it. He had had quite a few people try to make [the restaurant work] and just couldn’t. My dad said, ‘Why don’t you open a Mexican restaurant?’ And [uncle Albert] said, ‘No way. If you would like to do it, you’re welcome to it. You just make the mortgage payments.’ And that’s how my parents got started in the restaurant business.”

The restaurant business slowly picked up, and by 1985 they were able to expand into Tempe. Soon, people from miles around were traveling to Serrano’s for their famous bean dip. The nineties and two thousands saw the by-now very popular Mexican restaurant expand to the sizable enterprise it is today.

Despite hardships and the near death of the local department store industry, the Serrano family endured. Today, after 96 years, their business is the longest continuously operated family owned business in Chandler.