This historical marker recognizes the 130 acres of reclaimed wetlands, tidal marsh, and lagoon that were restored along this shorefront location. These wetlands were once perceived as "wastelands" and subject to the encroach of industrial development. As a result, during the early 20th century, many of San Francisco's wetlands, including the marsh located at the site of this marker, were drained and "filled in." Beginning in the 1960s and continuing to the present day, many people worked to restore and protect the wetlands through legislation and major reclamation projects. Throughout the Bay Area, thousands of acres of wetlands have since been restored including the wetlands at this site, known as Crissy Field Marsh. 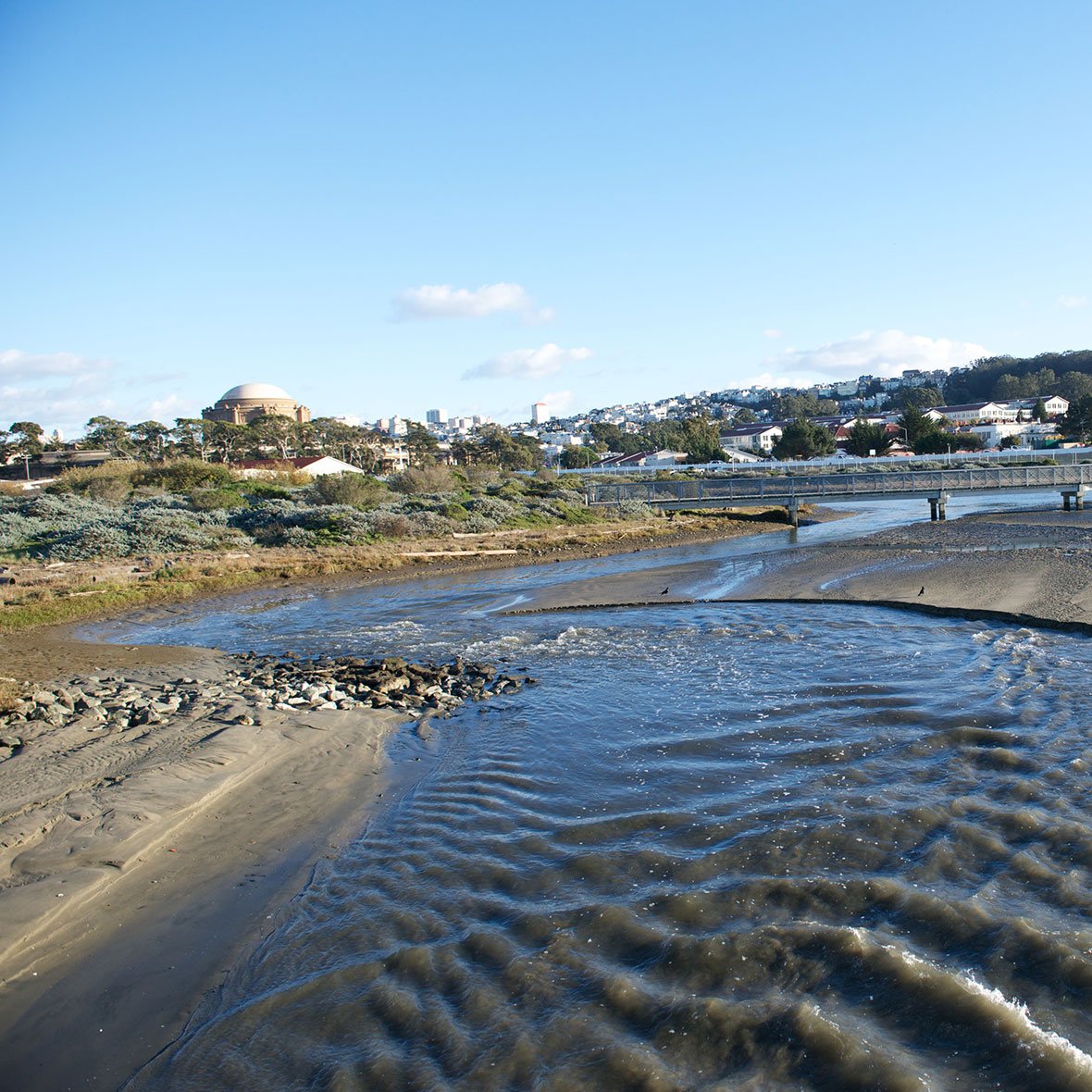 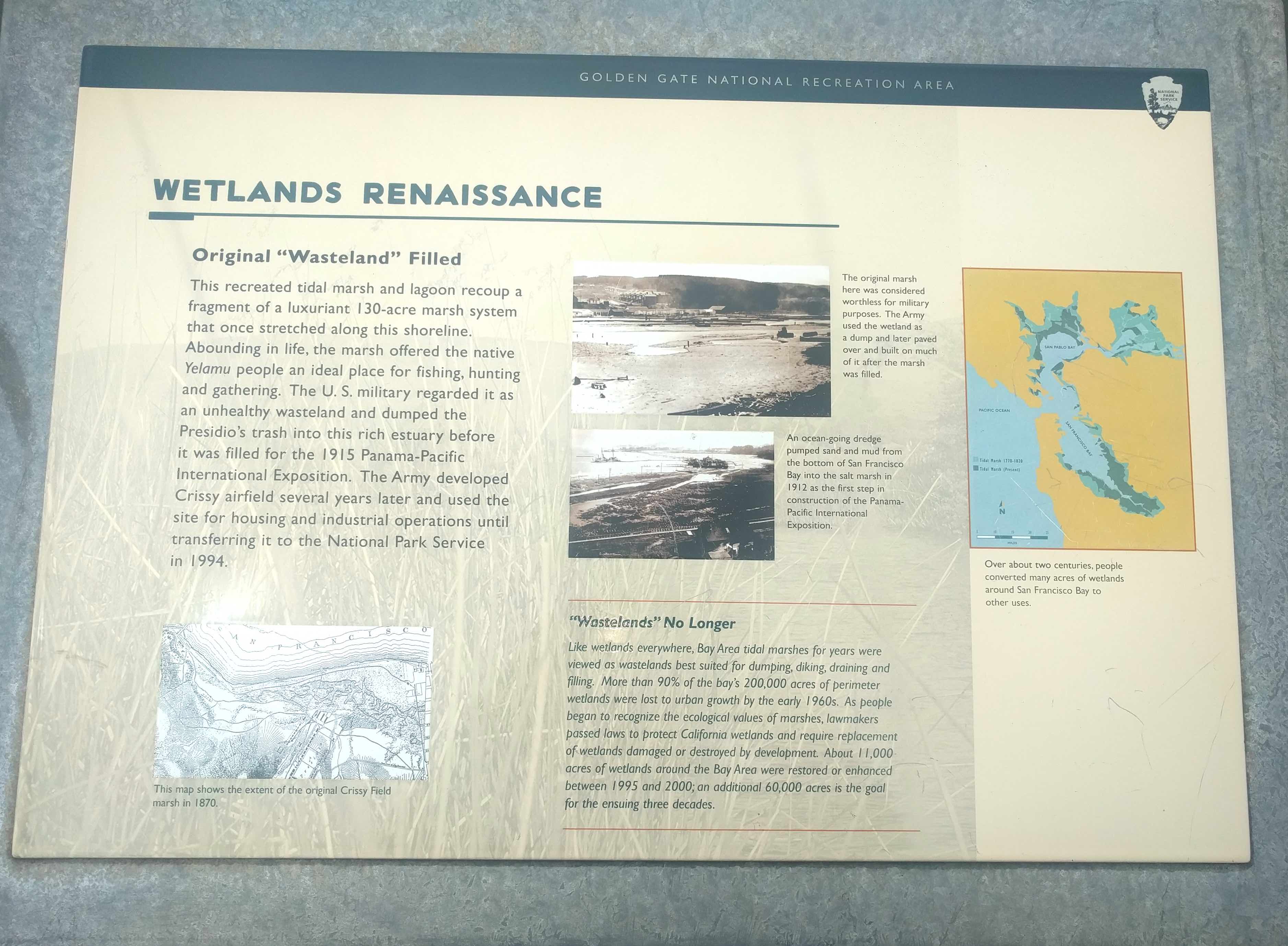 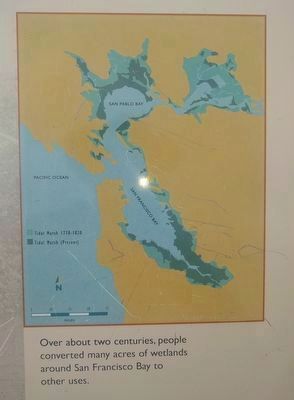 At one time, there were an estimated 540,000 acres of wetlands in the San Francisco area. The 130-acre tract of wetlands located at what is now Crissy Field Marsh in the Presidio once served as home to the native Ohlone people. These wetlands provided an important coastal habitat for harvesting fish and shellfish, as well as for hunting and gathering.

Beginning in the early modern era, wetlands were often perceived by western industrial civilizations as "wastelands". Consequently, many of San Francisco's wetlands, including the marshland located at the site of this historical marker, were drained and "filled in," a euphemism for converting wetlands to dry ground. Converting wetlands in this manner was perceived as a way to create relatively new inexpensive land, suitable for agriculture, commerce, industry, and housing.

Upon arriving at the Presidio (El Presidio) in 1776, the Spanish generally ignored the wetlands because they preferred raising livestock and agriculture as a means of subsistence. In 1846, however, the U.S. Army took control of the area. The Army began using the wetlands at this site for dumping and draining. In the early 20th century, wetlands located at the Presidio were further drained and converted to dry ground in anticipation of the 1915 Panama-Pacific International Exposition, a major "world's fair" event. Originally, the fair was to be held at the site of the Polo Fields and Cycling Track in Golden Gate Park. But due to the need for additional space, it was instead decided that the event would be moved and held on land converted from wetlands.

Following the draining and filling in of this tract of wetlands for the Panama-Pacific International Exposition, the U.S. Army later further developed the site as the Crissy Airfield. For several decades, the area around Crissy Airfield was also used for industrial and housing purposes. By the 1960s, however, it was clear that thousands of acres San Francisco's wetlands had disappeared over the course of the previous one hundred years. By some estimates, over 90% of San Francisco's coastal wetlands, or 200,000 acres in total, had been lost.

Around this time, a growing ecological consciousness was taking shape among some members of the public who were keen to save the wetlands from further destruction. Beginning in 1960s, legal protections for San Francisco's wetlands were not only actively sought, but in some cases, successfully won, thanks to a growing body of activists. "Save San Francisco Bay", an organization founded by three women, gained support from many other residents in the area. In 1965, the first wetlands protection act was passed in the United States. It prevented any further filling in of wetlands in the San Francisco Bay Area.

The first restoration efforts occurred under Dr. H. Thomas Harvey of San Jose State University in the 1970s. Initially, these were compensatory efforts to mitigate the existing damage. In 1994, the entire 130-acre tract was turned over to the U.S. National Park Service. From 1995-2000, wetlands restoration efforts saw large-scale results. At the turn of the 21st century, 11,000 acres in the San Francisco area were in the process of being restored as wetlands. This included a massive clean-up of hazardous chemicals and materials, with 90,000 tons of contaminated materials removed from the site of Crissy Field Marsh.

Today, the quest to continue restoring San Francisco's wetlands remains underway. It is anticipated that over 60,000 acres of wetlands throughout the Bay Area will be restored in the first half of the 21st century. At Crissy Field Marsh, the site of this historical marker, a pedestrian bridge called the Crissy Promenade allows people to walk out and experience a 360-degree view of the restored wetlands. This vantage point, along with the information and maps contained on the historical marker, reveals the rich ecological habitat of which these wetlands are a part.