This historical marker notes the location of a Gold Rush-era ship called the Niantic, which once stood on this spot. The Niantic was originally built in New England as a trading and whaling ship. When the Gold Rush hit San Francisco in 1849, however, the Niantic transported hundreds of passengers from Panama who were hoping to strike it rich in San Francisco. Upon arrival, the ship was abandoned in Yerba Buena cove, as the San Francisco Bay waterfront was then known, along with hundreds of other ships. The Niantic was sold to investors, who hauled it ashore and converted its hull into a hotel. This historical marker is located in an alcove of the building near Clay Street. It was erected in 1919 as part of a series of historical markers placed by the Daughters/Sons of the Golden West. 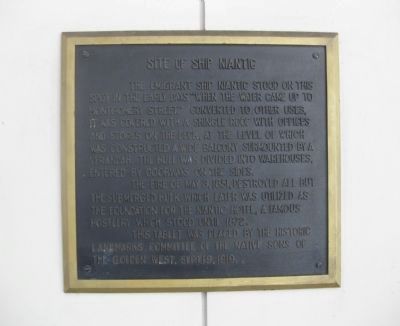 "High and Dry" painting (artist unknown), showing the hull of the ship Niantic, circa 1850, as the foundation for the Niantic Hotel 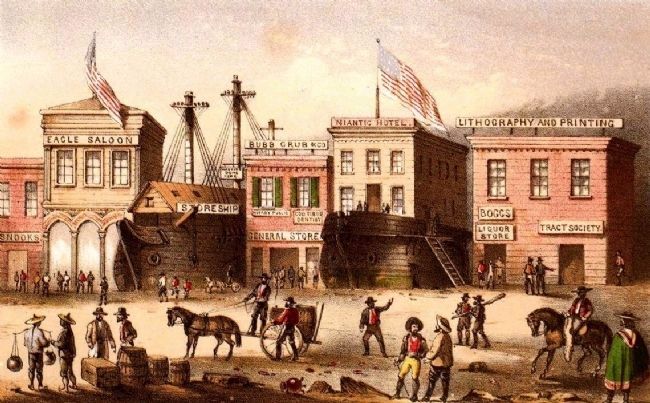 The Niantic Building (c. 1880) was constructed on the site of the earlier Niantic Hotel, which was built upon the location of the ship Niantic 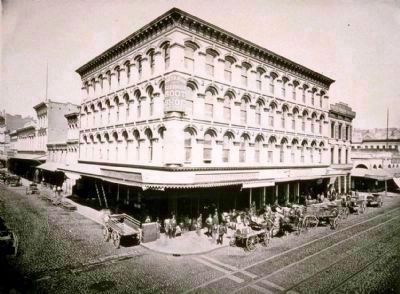 Remnants of the hull of the ship Niantic, on display at the San Francisco Maritime Museum 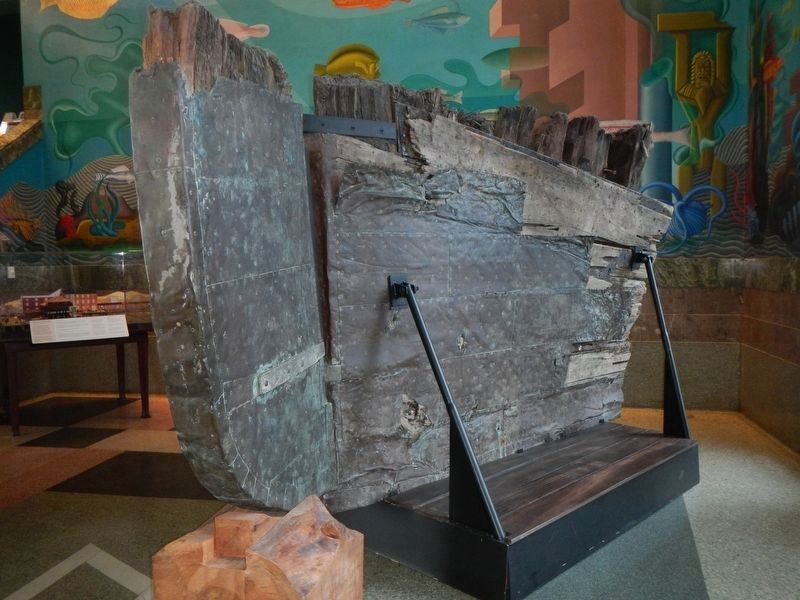 An illustration of the ship Niantic, after being hauled ashore. 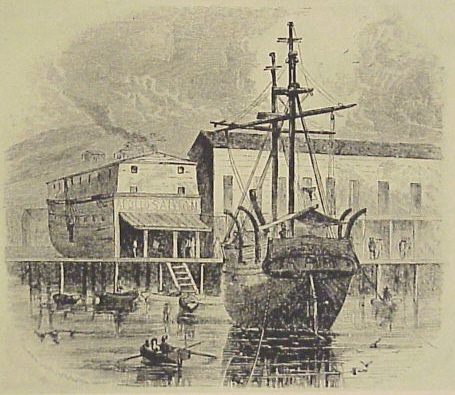 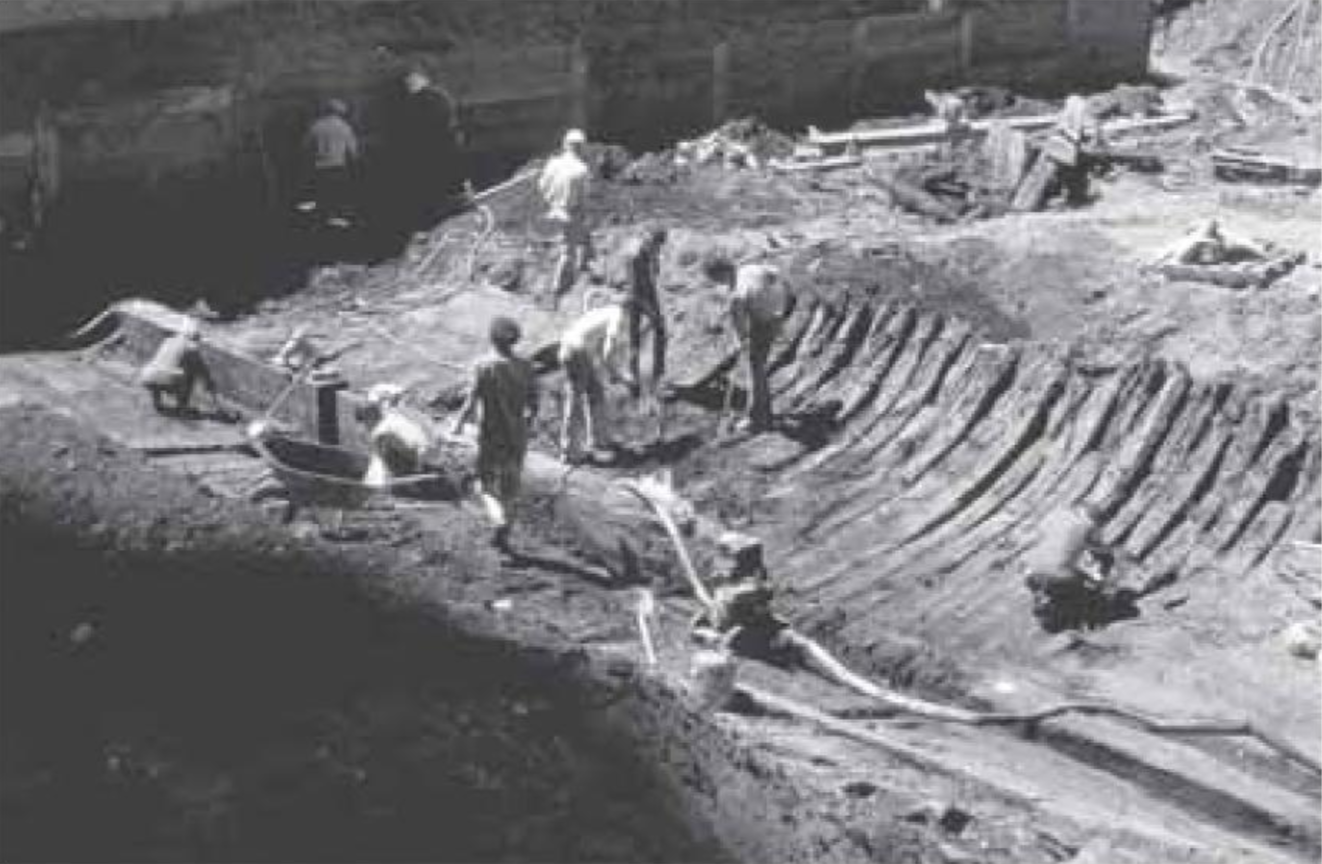 The ship Niantic was built in New England between 1832 and 1835 as a trading and whaling ship. From this east coast location, the Niantic set sail on lengthy expeditions, traveling southward down the Atlantic coast, sailing around Cape Horn at the southern tip of Chile, and then traveling northward up the Pacific coast of the Americas until reaching the Pacific Northwest whaling grounds. In addition to serving as a whaling ship, the Niantic also made voyages to China where American merchants were involved in trading.

When the Gold Rush hit San Francisco in 1849, many ships were put to new use transporting passengers from the eastern seaboard of the United States to California to embark on their quest for gold. Many older ships, in particular, set sail for San Francisco on what was thought to be their final voyage, due to the expense involved in making updates and repairs. However, the Niantic was not yet an old ship when the Captain made a decision to forgo a planned whaling expedition in order to transport some 250 to 300 passengers from Panama who were eagerly awaiting passage to San Francisco. Although it may have seemed a prudent financial decision at the time, upon reaching San Francisco, the Niantic never set sail again.

Upon arriving at its destination, the Niantic docked in Yerba Buena cove, as the San Francisco Bay waterfront was then known. Here, the Niantic was abandoned not only by its passengers but also by its crew, a plight that occurred to hundreds of other such ships docked in the cove. The crew of the Niantic joined the other mining hopefuls who set out for the Sacramento River on a frantic search for gold. Yerba Buena cove soon became a tangle of abandoned hulls, sails, and masts. As the Gold Rush continued for months, it became nearly impossible to maneuver vessels in or out of the cove.

When the captain of the Niantic was unable to find a new crew, the owner decided to sell the ship to investors, who then hauled the vessel partly ashore and began using the hull as a foundation for the "Niantic Hotel." A strange sight upon land, the ship attracted considerable attention as a hotel that advertised "rest for the weary and storage for trunks." The Niantic was among the first of the abandoned ships to be converted to new use on the San Francisco shoreline. The Niantic also holds the distinction of being transported the furthest inland of the Gold Rush-era ships that were hauled in from the cove onto the tidal flats. At high tide, the water just reached the Niantic Hotel, so rowboats could ferry people directly to it from the cove onto the muddy land.

To deal with the abandoned ships that still remained in the cove, the city decided to sell off "water lots". According to a San Francisco law, people could claim ownership of the land rights above any scuttled or sunken ship as long as they erected pilings and fencing to fill in the lots with earth. Hulls of ships were thus scuttled or sunk in this way and then converted into floating warehouses, stores, and offices, as well as hotels, restaurants, saloons, jails, and even churches. Upon seeing these unusual changes, the English journalist, Frank S. Marryat wrote,

"The front of the city is extending rapidly into the sea, as water-lots are filled up with the sand-hills which the steam excavators remove. This has left many of the old ships, that a year ago were beached as store-houses, in a curious position... so that a stranger puzzles himself for some time to ascertain how... the Niantic came to stand in the middle of the street.

The waterfront continued to change as the cove was filled in with earth and ships were converted into floating storehouses and many other uses. In May 1851, however, a fire swept through the cove, burning all of the wood from the ships down to the water line. Given the damage, this portion of the cove was eventually fully filled-in and paved over. Whereas the cove once extended as far as Montgomery Street, the new waterline became set at what is now Embarcadero Drive.

The remnants of the ship Niantic were re-discovered in 1978 when construction crews began to demolish the Niantic Building, which was built in 1872, in order to make way for the construction of the new Mark Twain Plaza Complex. The Niantic Building had replaced the old Niantic Hotel that had originally been built over the hull of the ship. Upon re-discovering remnants of the Niantic, archaeologists were called in to unearth what remained of the 119-foot ship. A portion of the old hull was placed on display for public viewing at the San Francisco Maritime Museum, where it can still be seen today. This museum is part of the San Francisco Marine National Historical Park, operated by the National Park Service.

Riggs, Cynthia . "The Niantic: A ship's life is illuminated through the restoration of its painting". Martha's Vineyard Magazine. September 2nd 2010.

The Bancroft Library at the University of California at Berkeley

The Bancroft Library at the University of California at Berkeley