Founded in 1897 to provide technical training in the textile industry, the Lowell Textile School grew into a much larger technical college before merging with Lowell Training College to form Lowell University, now UMass Lowell. Southwick Hall, where the Textile School moved in 1903, remains part of the Francis College of Engineering, which continues the School's tradition of technical education grounded in practical, hands-on learning and experience in industry. Another important continuity with the past is the limited representation of women and people of color in the institution's student body and faculty. Though the Textile School was formally coeducation from its founding, most women in the early years of the school participated in evening courses that did not lead to degrees. 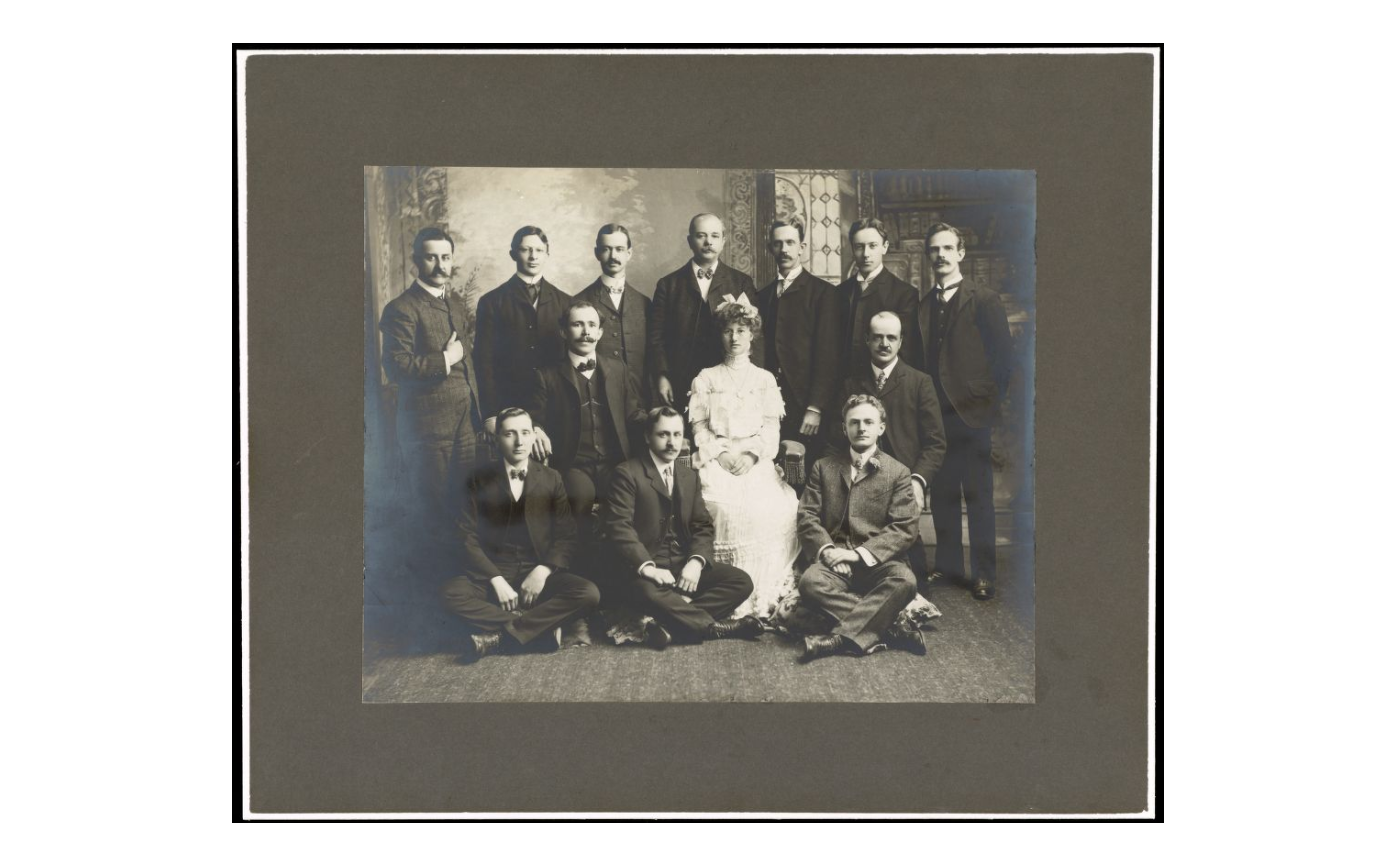 Troops train on the school's grounds in 1918. 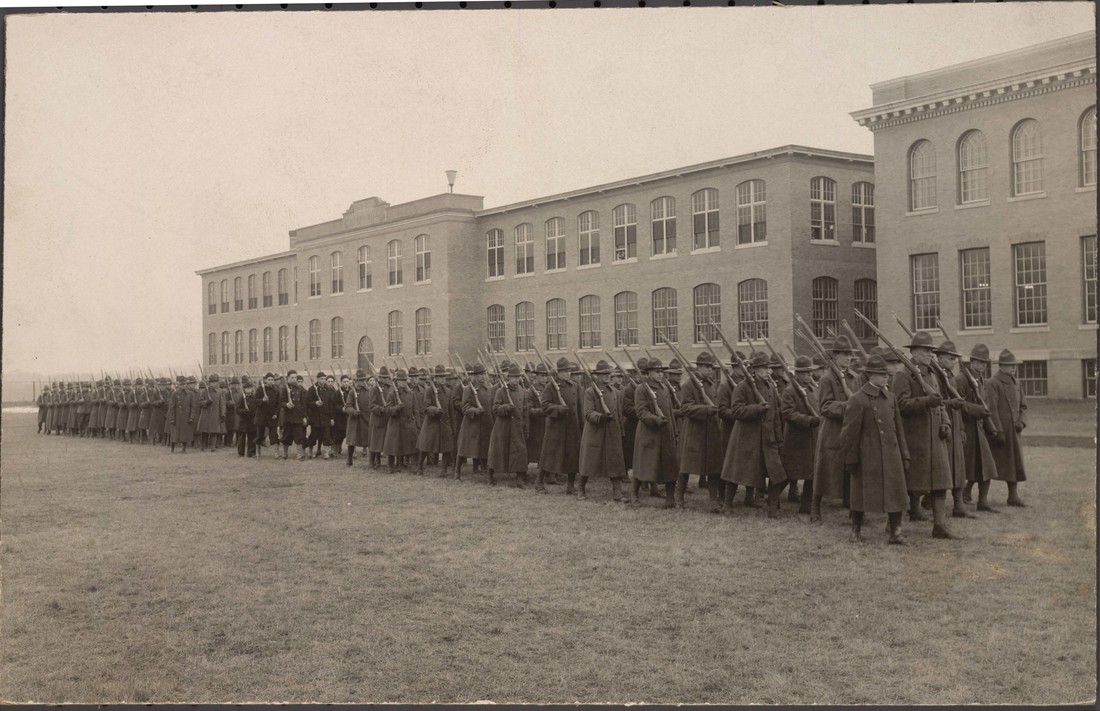 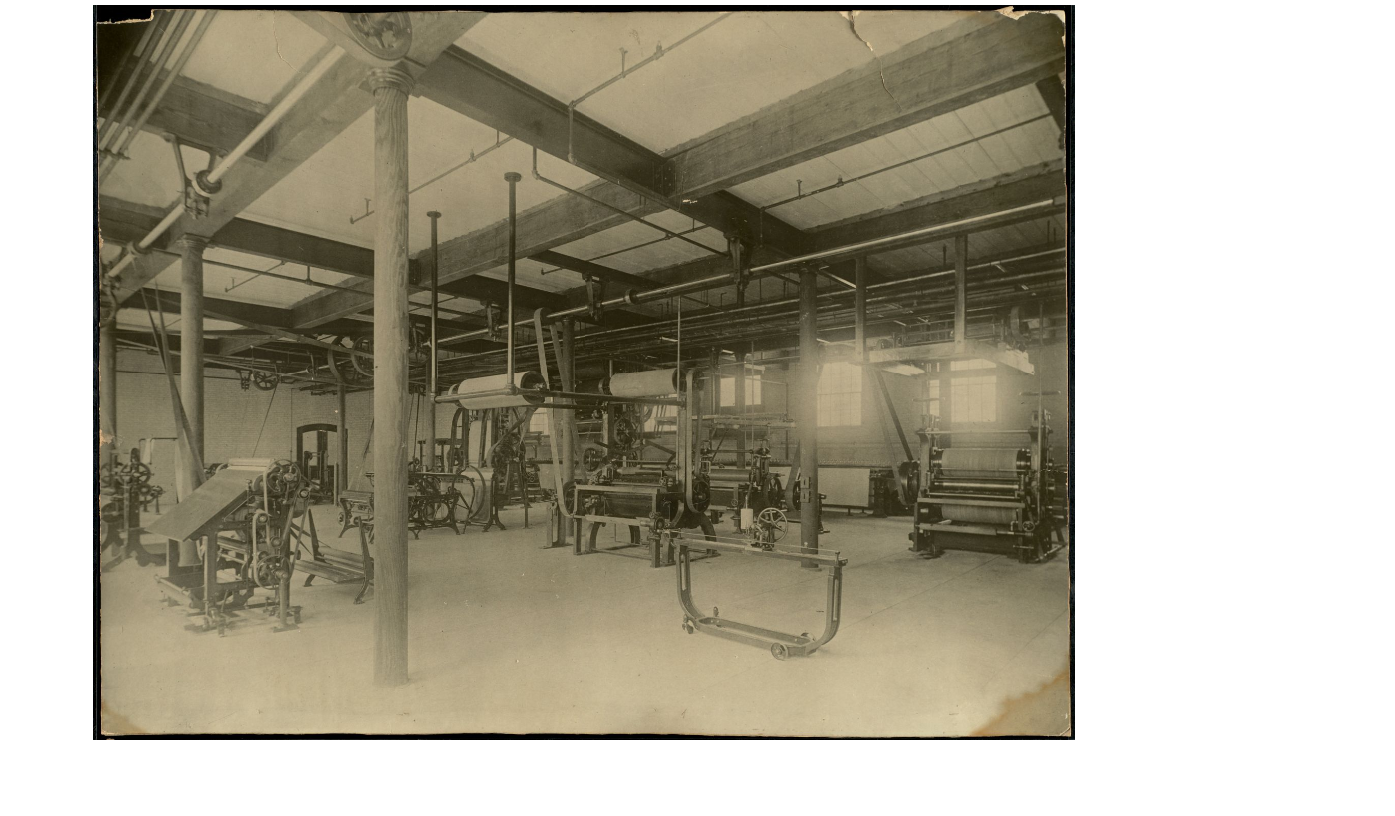 When the Lowell Textile School opened in 1897, it was located in three rented rooms on Middle Street. Massachusetts governor Roger Wolcott held a reception to honor its opening. More than 2,000 people attended. [1] Within a year of the school’s opening, the Boston Daily Globe called it a “wonderful success.” [2] Indeed, while enrollments rose in fits and starts, with the World Wars shrinking class sizes dramatically, the Textile School survives—after a fashion—to this day (in fact, in 1918, the school was used as training grounds for soldiers in World War I). Renamed the Lowell Technical Institute in 1953, the school merged with Lowell State College to become Lowell University, which then, in 1991, became UMass Lowell.

The Lowell Textile School was the brainchild of James T. Smith, who believed “it would be to the benefit of the employer and employee and also to the Commonwealth” to create an institution that could educate men—and some women—in the various aspects of textile manufacturing. [3] Concern was growing in the United States that the best schools in the industry were overseas, and industry leaders wanted a domestic alternative. The Philadelphia Textile School, founded in 1884, served as a model for the Lowell school. When the first class of 32 students enrolled in 1897, they could choose from among 3-year diploma programs in “cotton or wool manufacture, design, or textile chemistry and dyeing.” [4]

Soon, the school outgrew its rented rooms, relocating to Southwick Hall in 1903 thanks to the contributions of Frederick Fanning Ayer, who donated more than $150,000 to the school. [5] The school remained in Southwick Hall for more than seven decades, gradually expanding its curriculum to include other technical subjects. The global character of the fiber and textile industry meant that students from around the world were drawn to Lowell: China, Brazil, Canada, the Philippines. In 1908, the first Filipino graduate of the school, Geronimo H. Huising, expressed his hope that the development of the Filipino textile industry would help secure the islands’ independence from the United States. [6]

Though the vast majority of articles about the school, as well as the school’s own publications, spoke of an all-male student body, the school was legally coeducational from its founding. Senator Alfred Roe of Worcester, Massachusetts, refused to vote for any state funding for the school unless it was open to women students. [7] Indeed, most of the textile workforce was composed of women, though men dominated ownership and management; this pattern is borne out in the gender (im)balance at Lowell Textile School, where both the faculty and students were overwhelmingly male and overwhelmingly white. When women were able to take advantage of the school’s resources, it was often during evening classes that did not lead to degrees. It was not until the 1930s that women’s faces began appearing on the pages of the school yearbook: Margaret Mary Maher, Dorothy Myrtle Bliss, Marion Brownson Calder, Lucy Wiley Bobbins, Anita Marie Dori, Phyllis Jean Baker, Helen Jane Jarek, Eileen Margaret O’Donoghue—these are some of the first women to graduate from the school with degrees, but the seriousness of their study was often questioned by their peers. [8] By 1975, when the Textile School—by then renamed the Lowell Textile Institute—was incorporated into the new University of Lowell, the editor of the yearbook and the recipients of the school’s two major graduation awards were all women. [9] The disparity persists to this day: as of 2017, under 16 percent of students in the Francis College of Engineering were women. Similarly, under 15 percent of engineering students were from underrepresented racial and/or ethnic backgrounds in the same year. [10]

The story of Lowell Textile School is in some ways a story of successful change and adaptation to often-adverse circumstances. Though the industry it was meant to help support has declined significantly since the school’s founding, the school was able to adapt, changing its curriculum and relationship with other public institutions to continue providing rigorous technical education grounded firmly in industry. In other ways, the school’s story highlights the persistent inequalities that shaped—and continue to shape—the textile industry, education system, and American society at large.

6.      See both “First Filipino to Graduate,” Boston Daily Globe, June 6, 1908, 6, and G.H. Huising, “The Great Possibility of Developing the Textile Industry of the Philippine Islands,” in Report of the Twenty-Sixth Annual Meeting of the Lake Mohonk Conference of Friends of the Indian and Other Dependent Peoples (1908), 138-144.