On August 4, 1889, a restaurant in downtown Spokane, a few blocks from this marker, caught fire. The flames spread quickly among the wood-frame buildings of Spokane Falls (the city's name at the time). Efforts by firemen to blow up buildings and thereby deprive the fire of needed fuel were largely unsuccessful, and the fire destroyed more than 30 blocks of the city's business district. Urban landscapes often change slowly, but the fire's destruction meant the rapid consolidation of a new financial and retail district along Riverside and Main avenues--still visible to this day. Brick buildings replaced the old wooden ones and Spokane, as the city was renamed in 1891, rose like "a phoenix from the ashes."

Insurance adjusters flocked to Spokane Falls after the fire. Much of the damage to the city was covered by insurance. 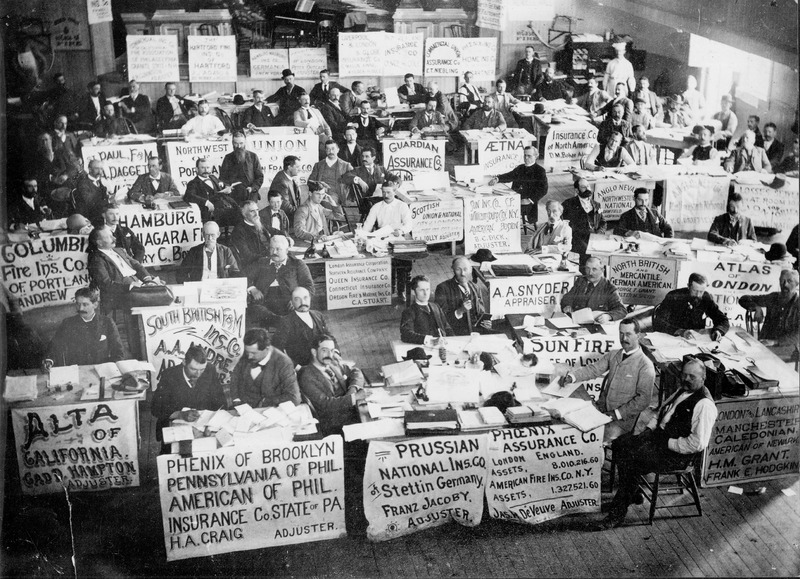 A drug store operating out of a tent after the fire. 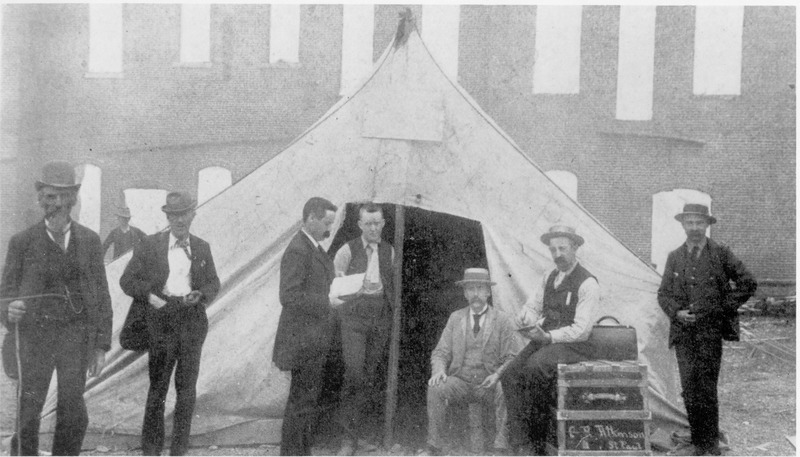 Riverside Avenue after the fire. Businesses opened almost immediately in tents, and reconstruction efforts were supported by investors and donations from near and far. 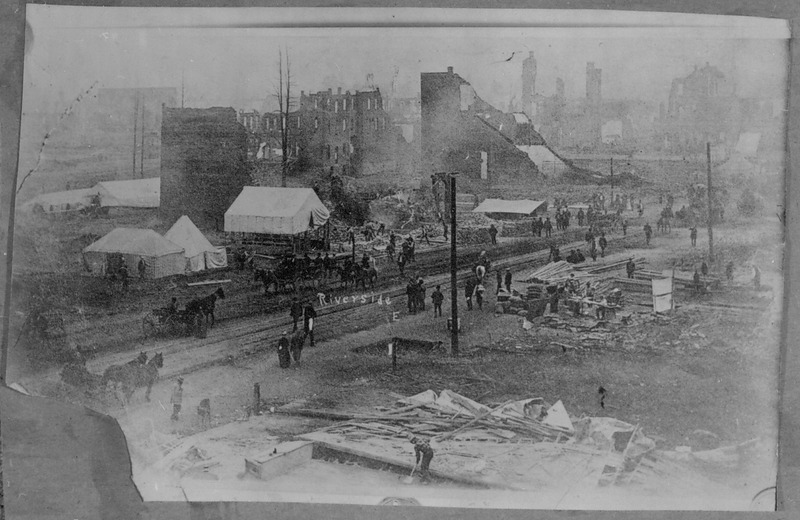 August 4, 1889. Eight years after the incorporation of the city of Spokane Falls in 1881—the same year that Rutherford B. Hayes established the Spokane Indian Reservation, relocating the tribe to just a fraction of their ancestral lands—and just a few months before the Territory of Washington would become a state, a devastating fire ravaged the young city. It started in a restaurant and lodging house on Railroad Avenue, sometime around 6 in the afternoon, and tore quickly through the wood-frame buildings that made up most of the city. They burned “like tinder.” [1]

Blustery winds drove the fire’s spread. Even as firemen blew up buildings to deny the flames additional fuel, the fire raged on like “a mad demon,” as one Seattle newspaper put it. [2] When the fire finally hit the river and ran out of fodder, more than 32 blocks had been destroyed, including all of the city’s eight banks, all but one hotel, and all but one newspaper. [3] Several people lost their lives, and while most buildings in the city were relatively short (the city’s first elevator was in a building under construction that was lost to the fire), several people were documented leaping from the second or third stories. Many scrambled to save homes and possessions, only to face the whirling flames and be forced "to let go of everything ... and run" for their lives. [4]

Many people lost their homes and lodgings to the fire. Laborers who lived in lodging houses in the burned district were forced onto the streets, prompting still-housed residents to grapple with the question of who deserved to experience homelessness: there had been people sleeping on the streets before the fire, but these, the local newspaper commented, were “undoubtedly vagrants” or “gamblers without occupation.” When businesses opened their doors to allow the affected people to stay the night, they often accommodated only “the more deserving” or “respectable” men. [5]

The fire threw other social divisions into relief, as well. Native Americans, many of whom had been pushed onto reservations fifty or so miles west of Spokane Falls, gathered damaged goods from the rubble, including charred food and other supplies. The local newspaper, not reflecting on why this might be the case, remarked dismissively that it was “not beneath [the Native Americans’] dignity” to do so. [6]

The destruction of one night would have long-lasting ramifications for the future of the city’s built environment. Immediately, investment flooded the area as businessmen and banks financed the reconstruction of the city, building more durable brick buildings. Within days, “three of the leading banking institutions had purchased property on the corner of Howard and Riverside avenue, paying an amount aggregating $100,000.” [7] (Indeed, banks still dominate this intersection.) Capital investment quickly concentrated in a key geographic area at the intersection of Washington and Riverside and along a section of Main, establishing a pattern that would endure as the city rebuilt and expanded in the decades to come. As historian John Fahey remarks, “The decisions of a few men to erect multipurpose buildings of large capacity established the relative values of central business properties generally by 1900, and later construction conformed to the pattern than these men had set.” [8]