Dedicated in 2007 by the state of Virginia, this historical marker commemorates a 1646 treaty between colonists and Necotowance who led an alliance of area Native tribes. In 1622 and 1644 Chief Opechancanough of the Youghtanund tribe of Virginian Indians and part of the Tsenacomoco political alliance, led massive assaults against the English colonists encroaching on their land in West Point. Opechancanough was captured and killed in Jamestown after his last attack. His successor, Necotowance signed a treaty in October of 1646 to end the Third Anglo- Powhatan War. The treaty was ratified by the Grand Assembly, acknowledging the English Crowns' ruling over the land by a yearly pay tribute. Later that same session, the allowance of sole Indian use of land north of the York River was broken and England was able to lay claim to the land.

The official historical marker for the Indian Treaty of 1646 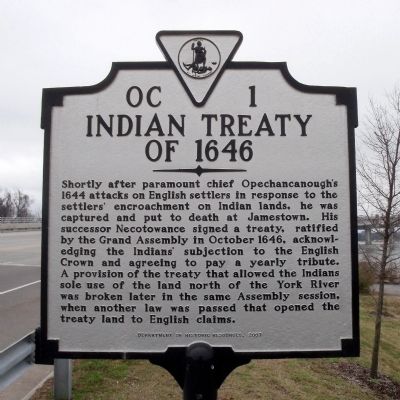 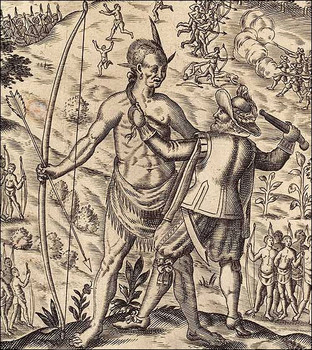 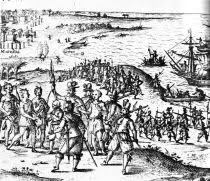 Opechancanough was the younger brother (or cousin) of Powhatan who was the paramount chief of the Jamestown landing in Virginia in 1607. John Smith portrayed Opechancanough as immediately hostile to the English but the chief actually treated the Englishman fairly when he was captured. After Powhatan’s death Opechancanough began to wield the most power. He organized an assault on the English colonists in March of 1622 which inevitably started the Second Anglo-Powhatan-War from 1622-1632.

The first war ended with the marriage of Pocahontas and John Rolfe in 1614. Opechancanough and others disliked the progression of English settlement and conducted several surprise attacks on the upriver colonists, killing nearly 1/3 of the English population. This ensued a ten-year war in which the English destroyed the Native American’s food supply (enough food to feed up to 4,000 people). At the end of the war in 1632 the balance of power had begun to tip more in Virginia’s power with Opechancanough’s power slowly waning.

In April of 1644, Opechancanough led another attack on the colonists that started the short Third Anglo-Powhatan War from 1644 to 1646. It ended with the capture of Opechancanough and his death in English custody at Jamestown. Following his capture and death The Treaty of 1646 was signed by his successor, Necotowance to end the Third Anglo-Powhatan War. This treaty stated that Necotowance and his tribe were subject to English law but would be protected by future attacks on land by the English government. The treaty also said the Powhatan people were to pay twenty beaver skins to the King of England yearly and that they would be free to hunt North of the York River.

The treaty set boundaries for the Indians not allowing them to travel south of the York river at all, and if they were caught, they were to be met with death. Englishmen who crossed north were subject to be adjudged as felons. BUT if the Englishmen were stuck in bad weather or wanted to cut timber they were allowed to travel North with no repercussions. The treaty also stated that from October until March the Englishman were allowed to kill and bring away all cattle and hogs they wanted. This treaty sadly began the overruling of the English of the Powhatan tribe in this area.