Acquired by the Frederick County Landmarks Foundation in the 1970s, Schifferstadt is one of the finest examples of colonial residential German architecture in the United States. One of the oldest standing homes in Frederick County, the stone house was built by Elias Brunner in 1758 after purchasing the land from his father, Josef Brunner. Named after the town the Brunner family immigrated from, Schifferstadt features two-foot thick walls and hand-hewn beams. It was in the Brunner family until 1899, fell into disrepair and was threatened with demolition until the Frederick County Landmarks Foundation restored it and converted it into an architectural museum that reveals how this unique house was built. Schifferstadt was designated a National Historic Landmark in 2017.

While the stone courses on the front of Schifferstadt are in neat rows... 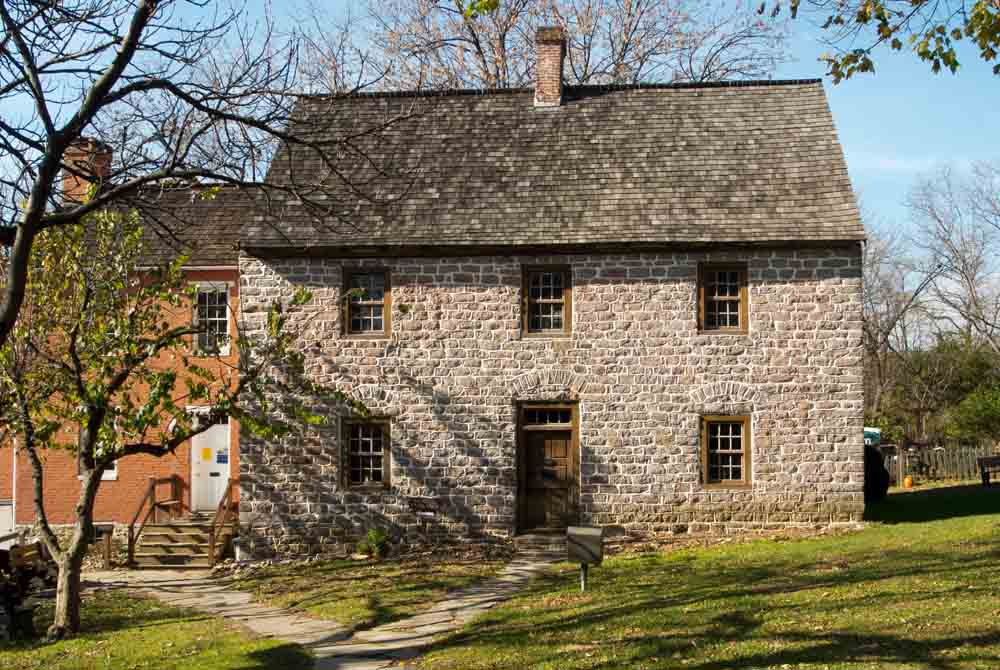 the same cannot be said for the stones in the rear which are in a random pattern. 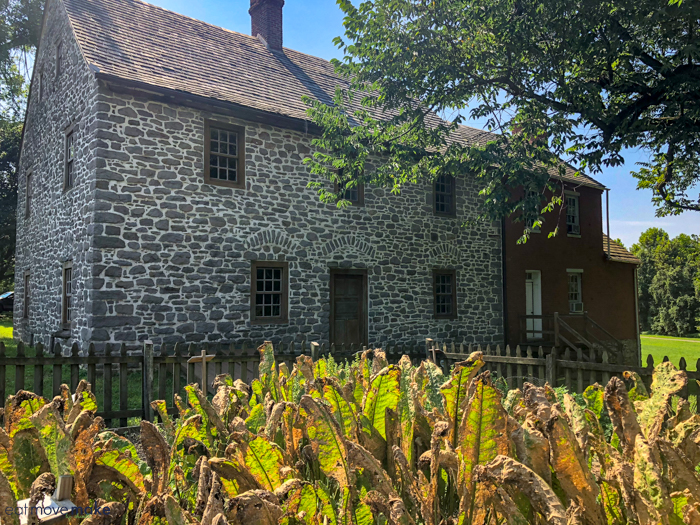 The kitchen within the Schifferstadt. 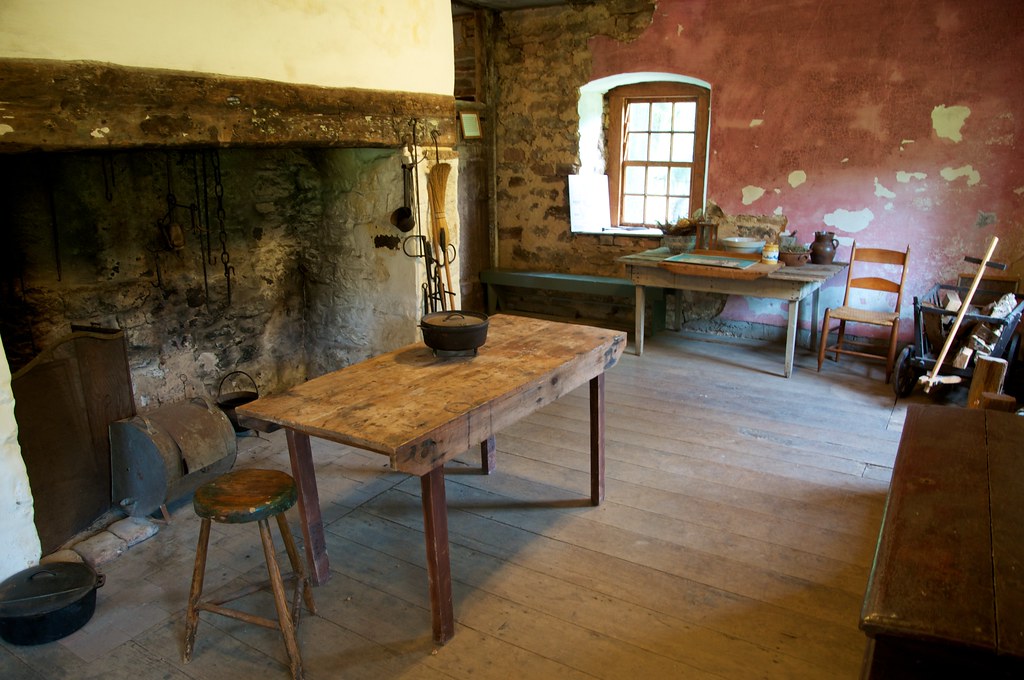 The remaining five-plate stove which, with two others, served to heat the entire home. 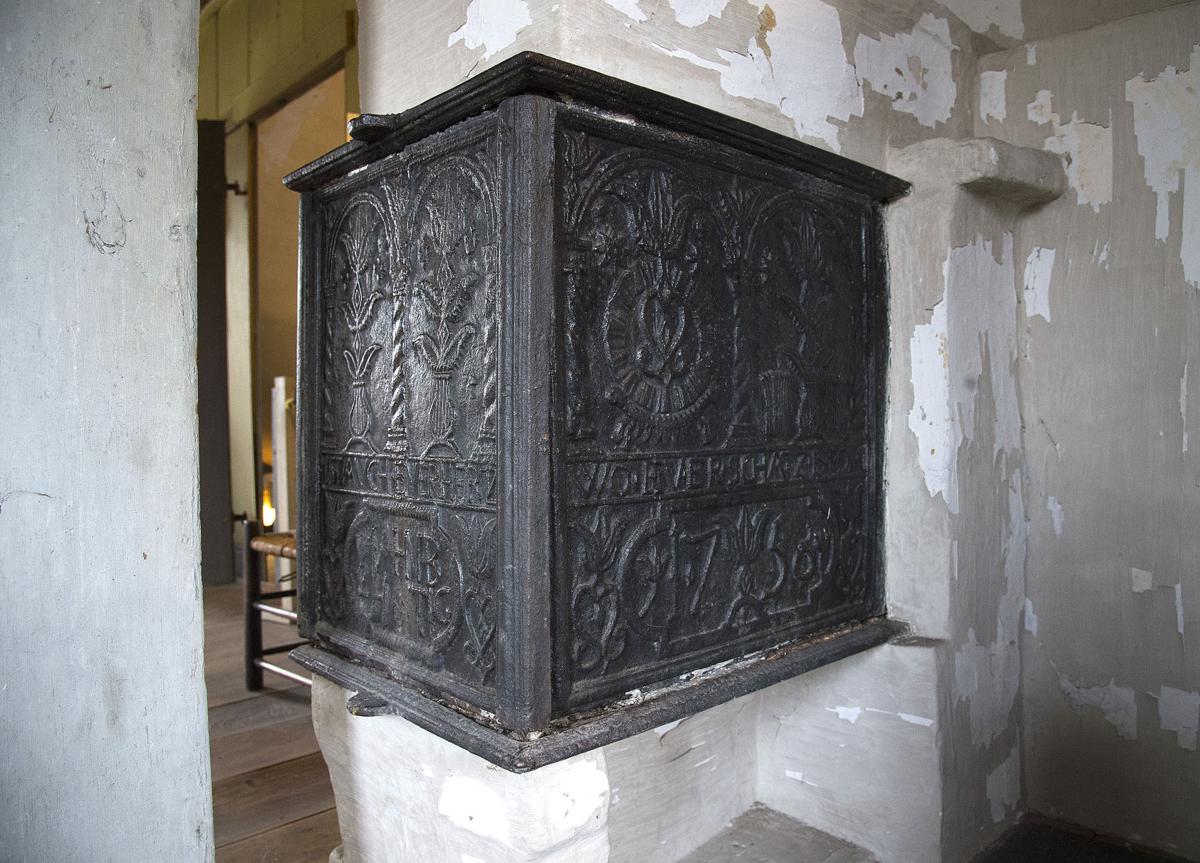 This window reveals the thickness of the walls. All the windows are splayed wider on the interior to allow more light to enter. 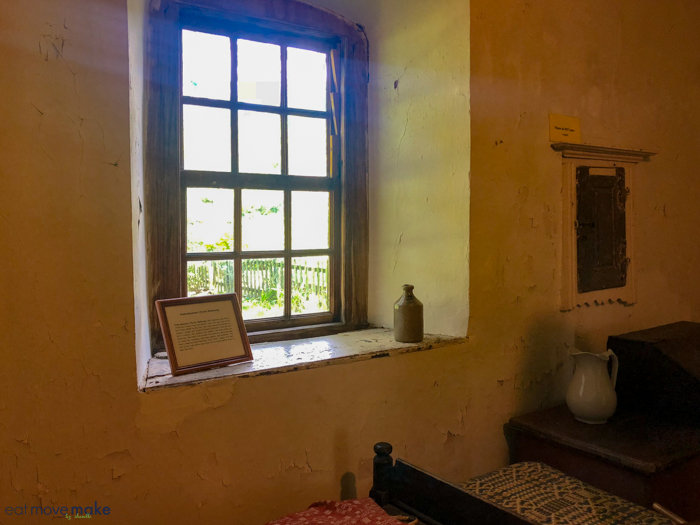 This cut-away drawing reveals how the Schifferstadt was constructed. 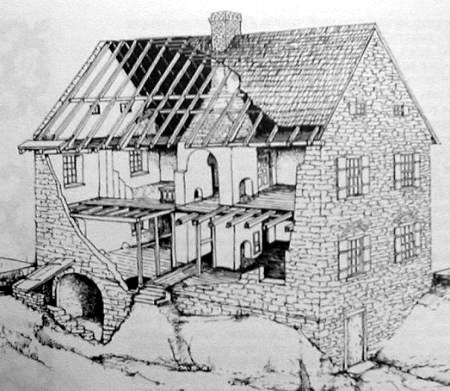 Sometime around 1730, Josef and Catharina Brunner and family arrived in Philadelphia from Germany. While many German immigrants stayed in the area or headed west to Lancaster or York, others continued southwest, following the Monocacy River to Frederick. The Brunners chose the latter route and arrived in the area in the mid-1730s. It is possible that they lived on the land that became Schifferstadt prior to purchasing over 300 acres from Daniel Dulany in 1746. Regardless, Josef built a log cabin on the site to house his growing family and his sons purchased adjacent land which brought the family’s landholdings to over 1,000 acres.

In 1753, Josef Brunner sold his farm to his youngest son, Elias. When Elias built the current stone house in 1758, it is not known if he demolished his father’s log cabin immediately or attached it to his new home to be torn down when a brick expansion was added later. Elias built his two-story, German colonial home from locally quarried stone. The fact that the house was built of stone reveals Brunner’s wealth as this required a crew of stone masons to build. The six-over-six windows and entrance in the lower floor feature arched courses to better support its thick walls and it features a massive central chimney. The chimney fed a colonial form of radiant heating which utilized three five-plate stoves located at various places in the home. Only one now remains.

The upper-floor and attic are supported by posts attached to large, forty-foot oak beams that run the width of the house. Gaps were filled with brick nog and the interior walls were plastered and painted white to better reflect natural and candlelight. The home contains four bedrooms, with the parent’s on the first floor which also houses a small wall safe. The kitchen includes a huge, walk-in fireplace with a concave-shaped stone serving as a sink that drained to the outside. A narrow, winding staircase leads to the second floor where the additional bedrooms are located and to the single-room attic where field hands might have slept. The attic also provides an unimpeded view of the large chimney. Below the structure is a barrel-vaulted, ventilated cellar that was used as a natural refrigerator to store eggs, milk and root vegetables. The brick addition was constructed in the mid-19th century and its lower level contained a summer kitchen in what used to be the log cabin’s basement. It sits below a former parlor that now serves as a gift shop.

Schifferstadt stayed in the Brunner family until 1899 when it was sold to Edward Krantz for $16,000. Unfortunately, it fell into disrepair as the 20th century progressed and talks of its demolition swirled. It was saved in 1974 when the Frederick County Landmarks Foundation stepped in and purchased the house and remaining three acres. The Foundation then decided, rather than create another period museum, to convert the house into an architectural museum. They, in a sense, revealed Schifferstadt’s guts to expose and explain how this unique home was constructed. They removed plaster to expose the interior brick walls and second fireplace and draw attention to its heating system and hand-hewn support beams. They also re-created a Heritage Garden, that features herbs and vegetables that would have been used for cooking and medicine by the Brunner family. Attended to by a master gardener and volunteers, the garden annually grows catnip, red and Black currants, hops, mint, yarrow and other plants.

Liz. "Schifferstadt Architectural Museum - This German Style House Has Something You Can't find Anywhere Else In The World." EatMoveMake. March 12, 2019. Accessed March 10, 2020. https://eatmovemake.com/schifferstadt-architectural-museum/