The sixteenth President of the United States, Abraham Lincoln was born to humble beginnings in Kentucky. A lawyer by trade, he served four terms in the Illinois General Assembly from 1835 to 1843 before being elected to the U.S. House of Representatives for one term from 1847 to 1849. While he lost the 1858 Illinois senate race, he secured the Republican Party’s nomination for president of the United States two years later and won the election. As president, he shepherded the nation through the Civil War, while also issuing the Emancipation Proclamation, signing the West Virginia statehood bill, and helping to pass the Thirteenth Amendment through Congress. On the evening of April 14, 1865, less than a week after Confederate General Robert E. Lee’s surrender at Appomattox, Lincoln was shot by southern sympathizer John Wilkes Booth while attending a play at Ford’s Theatre in Washington, D.C. He died early the next morning. In 1867, a new county in southwestern West Virginia was formed from parts of Boone, Cabell, Kanawha, and Putnam counties. It was named Lincoln County in honor of President Lincoln. 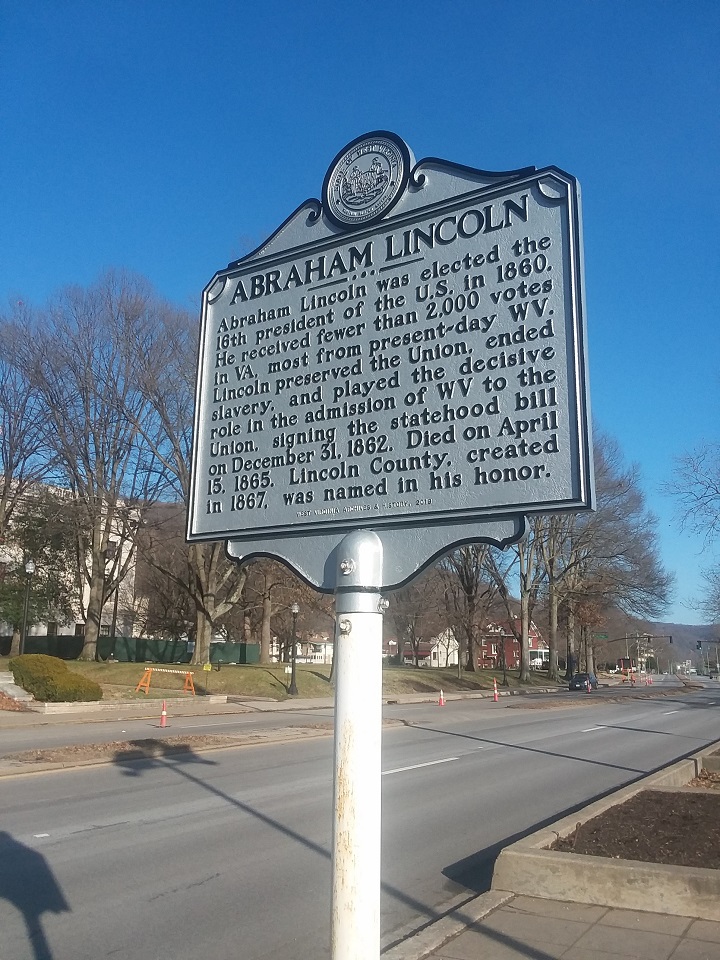 Photograph of President Lincoln taken in 1864 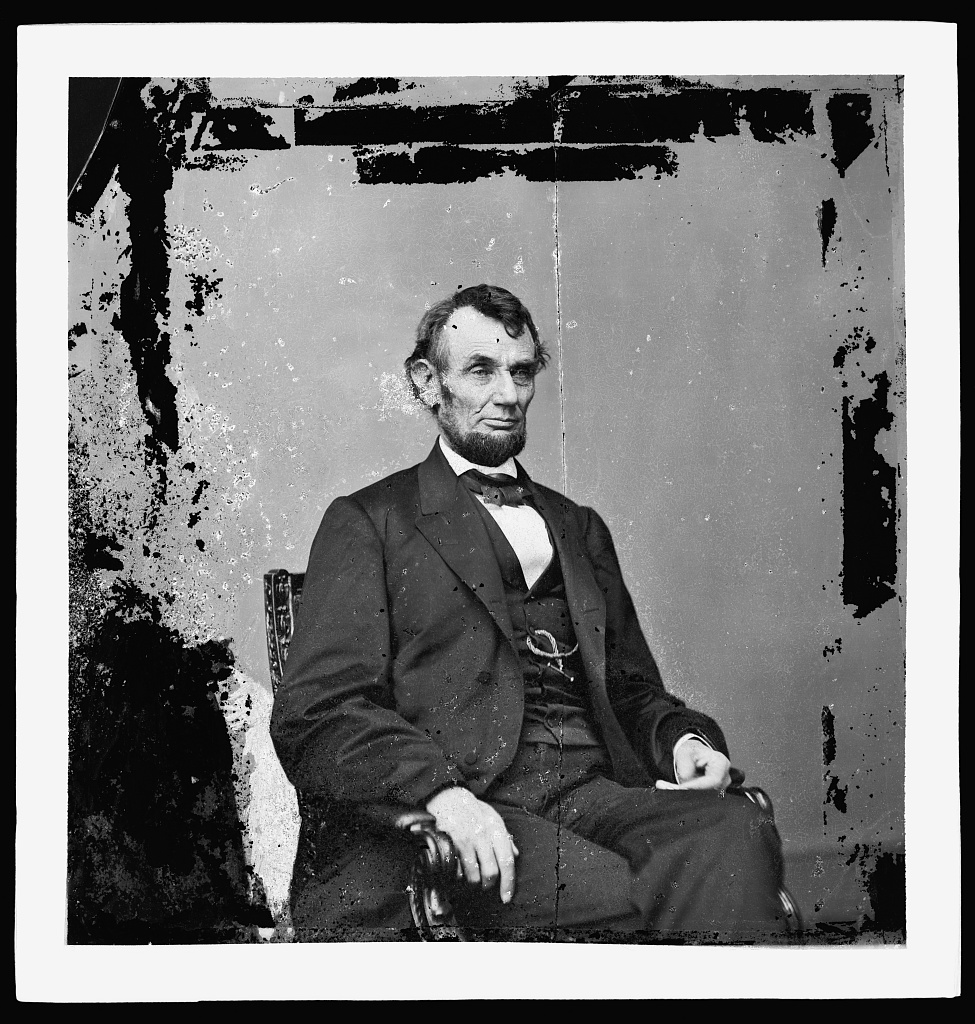 Abraham Lincoln was born in Hardin County (now LaRue County), Kentucky on February 12, 1809. His parents, Thomas Lincoln and Nancy (Hanks) Lincoln, were both born in Virginia and came from humble families. When Lincoln was seven years old, his family moved to Indiana. Two years later, his mother died. As a young man, he received very little formal education. Despite this, he possessed a voracious appetite for knowledge and read as much as possible, often by candlelight well into the night. In 1830, his father moved the family to Illinois. Two years later, Lincoln served as a militia captain during the Black Hawk War, but never saw combat. After his military service ended, he read law and attempted to launch a political career, campaigning for a seat in the Illinois General Assembly as a member of the Whig Party. Lincoln was defeated, but a second attempt in 1834 was successful. He would ultimately serve four terms in the Illinois General Assembly from 1835 to 1843. During this time, he received his law license and practiced in Springfield throughout his tenure in the state legislature. In 1842, after a tumultuous courtship, Lincoln married Mary Todd, the daughter of wealthy slave-owning family from Lexington, Kentucky. The couple met a few years earlier at a ball in Springfield. The marriage produced four sons, only one of whom (Robert Todd Lincoln) lived to adulthood.

Four years later, Lincoln won a seat in the U.S. House of Representatives. His time in Congress, however, was short-lived; serving only one term from 1847 to 1849. After, Lincoln resumed his legal career, but the passage of the controversial Kansas-Nebraska Act in 1854 reinvigorated his interest in politics. Four years later, Republicans in Illinois nominated him to run for the U.S. Senate. While he ultimately lost the race to Democrat Stephen Douglas, Lincoln earned a national reputation. Two years later, in 1860, the Republican Party nominated him as their candidate for president of the United States. Despite not receiving a single electoral vote from the slave states and winning just about forty percent of the popular vote, Lincoln enjoyed a relatively comfortable win in the Electoral College.

Before Lincoln took the Oath of Office in early March 1861, seven southern slave states had already seceded from the Union. His decision to resupply Fort Sumter in Charleston Harbor the following month led to its bombardment by South Carolina troops. While the federal installation surrendered, the incident galvanized northerners, who enthusiastically answered Lincoln’s subsequent call for 75,000 volunteers to suppress the southern rebellion. His call for volunteers, however, acted as a double-edged sword; four additional southern slave states seceded and joined the Confederacy. After the Battle of Antietam in September 1862, Lincoln issued the Emancipation Proclamation, declaring all enslaved individuals living in the Confederacy free. While in reality it did not free any slaves given that the Confederacy did not recognize or obey U.S. federal law, the Emancipation Proclamation did allow for the enrollment of African American men in the U.S. armed forces. In addition, it dashed the Confederacy’s hopes of securing foreign recognition, since both Great Britain and France had abolished slavery decades earlier and thus could not support the creation of a slave-owners’ republic. On December 31, 1862, Lincoln signed the West Virginia statehood bill. On June 20 of the following year, he officially proclaimed West Virginia the thirty-fifth state in the Union. In late 1864 and early 1865, Lincoln worked assiduously to secure the passage of the Thirteenth Amendment to the Constitution, which abolished slavery in the United States.

On the evening of April 14, 1865, less than a week after Confederate General Robert E. Lee’s surrender at Appomattox, Lincoln was shot by southern sympathizer John Wilkes Booth while attending a performance of the comedy Our American Cousin at Ford’s Theatre in Washington, D.C. He died early the next morning. He was fifty-six years old. Nearly two weeks later, federal troops tracked down and killed Boothe in Virginia. Four of his fellow co-conspirators were apprehended, tried, convicted, and executed that summer.

In 1867, a new county in southwestern West Virginia was formed from parts of Boone, Cabell, Kanawha, and Putnam counties. It was named Lincoln County in honor of the nation’s sixteenth president.

In 2019, as part of its Civil War sesquicentennial project, the West Virginia Highway Historical Marker Program of the West Virginia Archives and History installed a marker dedicated to Abraham Lincoln. It stands along Kanawha Boulevard East directly across from the state capitol in Charleston.