Fort Riley is a major military installation located in Kansas, nearby Junction City and Manhattan. Home of the 1st Infantry Division, Fort Riley creates and sustains combat ready active duty units. These units maintain a deployment ready status to meet the needs of the United States military and government. The 1st Infantry Division currently has 2 Armored Brigade Combat Teams as well as a divisional Sustainment Brigade, Aviation Brigade and Division Artillery. For ceremonies at Fort Riley, the 1st Infantry Division Band and the Commanding General's Mounted Color Guard are also located at the Fort Riley Post. Fort Riley motto: "No mission to difficult, no sacrifice to great."

1866 Survey Post Photo graph. One of the earliest photos of Fort Riley. 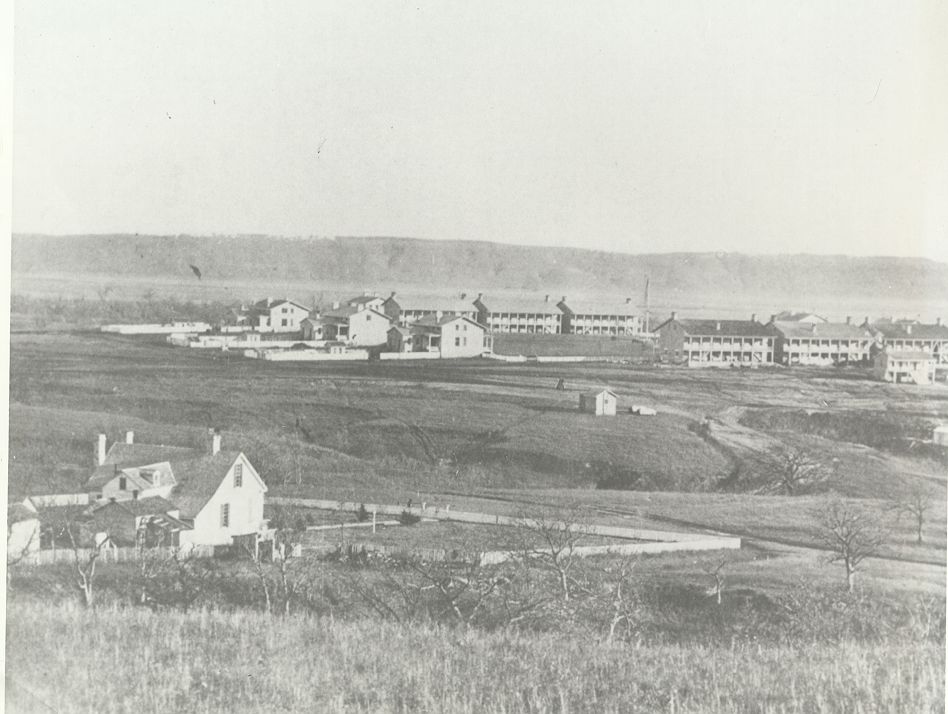 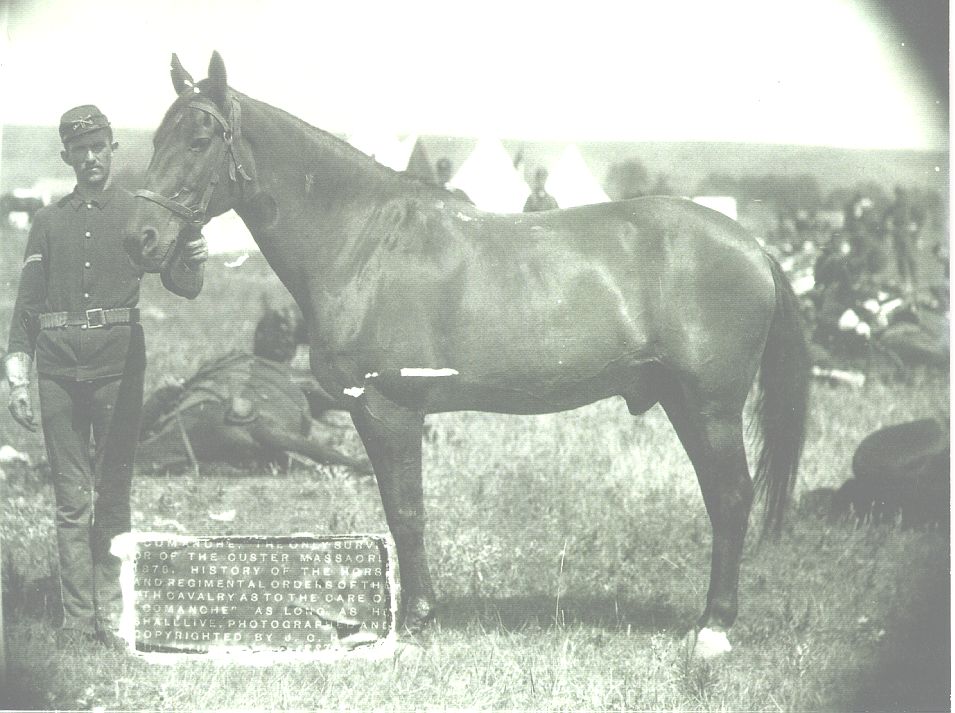 M8 Grey Hound Scout Car - and the traditional Cavalry Trooper on Horse back. 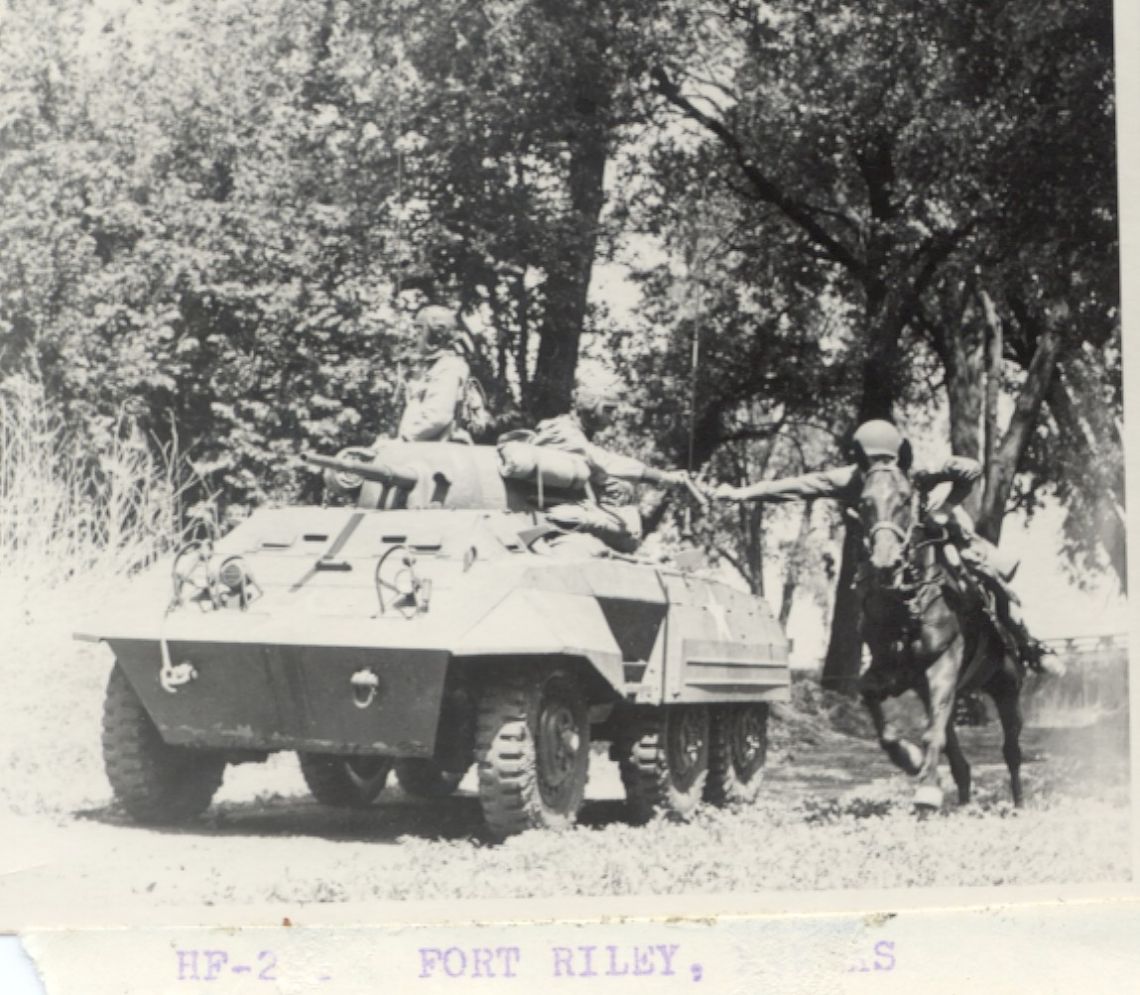 The early expansionism of the United States to the Western stretches of the continent, meant the travel through lawless and unsettled frontier territory. In the 1850's travelers and traders from Oregon to California and Santa Fe trails were at the mercy of being raided on the open plains. To combat this raiding, a series of strategic forts were erected in efforts to secure the trails and ensure the safety of the travelers. In 1852 a surveying party led by Capt. Robert Chiton of the 1st U.S. Dragoons had chosen a location of land located between the Republican and Smoky Hill Rivers for one of these strategic forts. Originally the fort was named Camp Center due to the belief that the particular location of the camp was located in the center of the United States. A force of 3 companies of the 6th Infantry Division manned the camp and began further construction. On June 27, 1853 Camp Center was renamed Fort Riley named in honor of Major General Bennett C. Riley; leader of the first escort mission along the trails to Santa Fe. At first, Fort Riley functioned as a outpost that hosted military escorts for the people, traders, and mail trains traveling the trails across the plains.

During the Civil War the federal troops stationed at Fort Riley were sent East to participate in the war. However, to fill their place at the post, Kansas Militia units occupied Fort Riley to continue protection of the trails for travelers and also to house Confederate prisoners of war. After the Civil War Fort Riley continued its strategic protection, but to the newly added rail lines through the area. The famous 7th Cavalry Regiment under the command of Brevet Major General George A. Custer was mustered at Fort Riley for operations into the high plains of Western Kansas and Eastern Colorado.

As the Pacific Rail Line continued Fort Riley lost its initial strategic importance. However, throughout the course of the late 1800's and the 20th century; Fort Riley maintained its existence providing to be a military asset to the US government. It functioned as a training center and garrison for the 1st Infantry Division created in 1917, and many other sub units during the wars and conflicts of the 20th Century. To this day Fort Riley remains and is full of museum with plethora's of historic value on its post.