Students from SCSU and Claflin Universities stage a peaceful protest in which people practiced, "selective buying". The idea was to put pressure on white owned business to reduce the economic hardships that they were placing on Black residents. Because of the protest, 15 students were suspended or expelled. 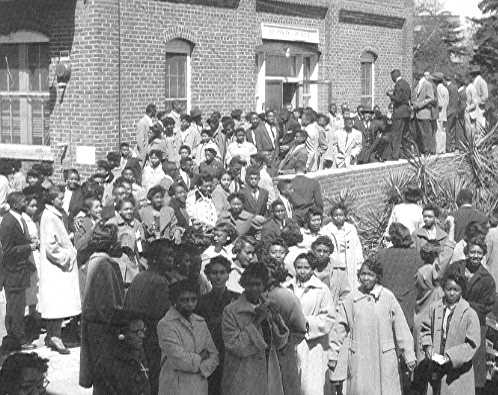 After the Supreme Court decision of Brown v. Board of Education, a petition was signed by 39 parents of Black children and sent to the Elloree school district. Another was sent to the city of Orangeburg, and was signed by 57 parents. They were asking for the law to be upheld, and for county schools to be desegregated. These petitions caused outrage in the "white citizens councils". This was followed by economic pressure on the signers, to take their names off, a few did but many did not.
Due to people losing their jobs and evictions, and some businesses no longer supplying Black merchants, students began a protest. The students first asked school administration to boycott those who were denying service to Black store owners, when this failed to happen, they began a hunger strike. The students also began a process of "selective buying", where they wouldn't but from merchants who opposed school integration. Because of these protests, 15 students were expelled or suspended.
Fifty years after the protest, the ninth President of SCSU made a formal apology for the way the University handled itself during the protest. The former students were happy with the apology, many being present for the first time since then.