The Fort Zachary Taylor Historic State Park, better known simply as Fort Taylor or Fort Zach to the locals is a Florida State Park and National Historic Landmark centered on a Civil War era fort located near the souther tip of Key West, Florida. Fort Taylor is a perfect example of the wealth of history Florida has to offer as well. The park, which now covers a total of 54 acres, and is a National Historic Landmark that played a role in Florida's early development. The construction begain in 1845, shortly after Florida became a state. In 1850, the fortress was named after the U.S. President Zachary Taylor, who died in office earlier that year.

The outside view of Zachary Taylor showing the moat 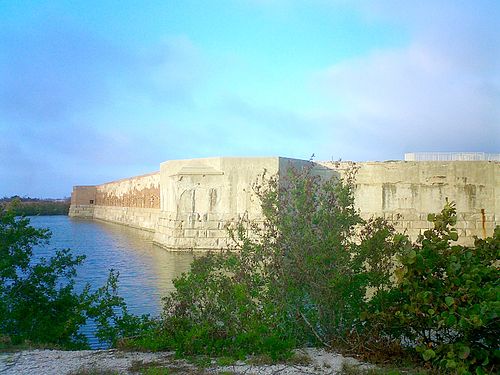 The central yard of Fort Taylor 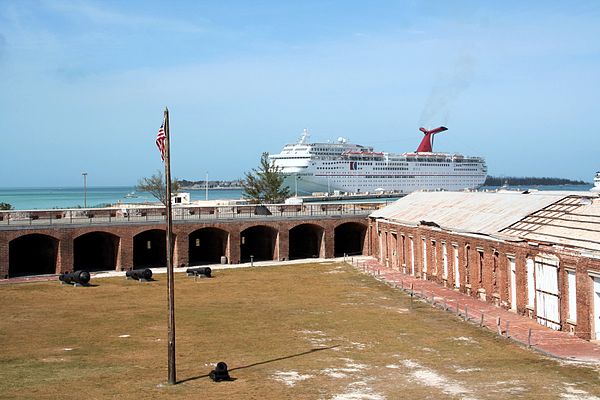 The outside Pano at Key West Florida

Construction of the fort began in 1845 as part of a mid 19th century plan to defend the southeast coast through a series of forts. The fort was named for United States President Zachary Taylor in 1850, a few months after president Taylor's sudden death in office. Yellow fever epidemics and material shortages showed construction of the fort, which continued throughout the 1850s. At the outset of the U.S. Civil War in 1861, Union Captain John Milton Brannan seized control of the fort, preventing it from falling into Confederate hands and using it as an outpost to threaten blockade runners. Orginally the fort was surrounded by water on all of its sides, with a walkway linking it to the mainland.

This fort was completed in 1866, although the upper level of one side was destroyed in 1889 to make way for more modern weapons, with the older cannons being buried within the new outer wall to save on materials, and the fort was heavily used again during the 1898 Spanish American War. In 1947 the fort no longer of use to the army, was turned over to the U.S. Navy for maintenance. In 1968 volunteers led by Howard S. England excavated Civil War guns and ammunition bured in a long abandoned parts of the fort, which was soon discovered to house the nation's largest collection of Civil War cannons. Fort Taylor was therefore placed on the National Register of Historic places in 1971, and designed a National Historic Landmark in 1973. Due to the filling in of land around the fort, including the creation of an attractive stretch of beach, the park now occupies 87 acres.

The fort's land that is closer to downtown Key West became part of the Truman Annex to Naval Air Station Key West. The annex was originally called Naval Station Key West until its closure in 1974 and included a submarine base. President Harry S. Truman used it for his Winter White House for 175 days in 11 visits. The secret service had a private beach built on the land for the presidents secuirty, but he reportedly only visited it once, preferring the public beaches. The beach named is called "Truman Beach." The fort, along with its related support buildings, was later renamed for Truman.

Naval Station Key West was decommissioned in 1974 because the U.S. had decommissioned nearly all of their diesel electric submarines and contemporary nuclear powered submarines were too big for the existing port. Most of then former naval station became an annex to the remaining Naval Air Station Key West and served as the landing point for many during the 1980 Mariel boat lift of Cuban refugees. Those buildings in the Truman Annex and associated real estate not retained by the navy as part if NAS Key West were sold to private developers. Theres a museum for the Truman White House and the navy continues to own and maintain the piers and that portion of the naval station property to the south of Fort Taylor, primarily in support of Joint Interagency Task Force South and the Naval Security Group Activity. This is such a gorgeous place to visit and stay on vacation because there is so much to do, and tours of the historic fort are offered at 12 daily.