Founded in March of 1878, this church is one of the only visible markers left for the community of Emory Grove which is one of the oldest African American communities in Montgomery County, Maryland. The original church was demolished in 1900 and the current building was completed in 1903 to serve the congregation of the Emory Grove United Methodist Church.

This photo of Emory Grove M. E. Church was included in the National Register of Historic Places listing 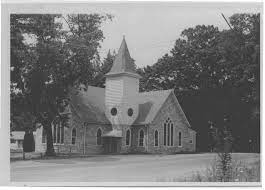 The Emory Grove United Methodist Church is the only building left standing from the Emory Grove Community and their camp meeting days. If you look around, you will see apartment buildings and suburban development. You do not see the one of the oldest Black communities in the county. The Emory Grove Camp Meeting and the Emory Grove Community were established between 1864 and 1870 when freed slaves moved from Redland and Goshen and purchased land. The first church and school started in 1876 at the home of John Dorsey; a Civil War veteran who had begun working in the Lord’s service after he won his freedom. An African American public-school system was inaugurated in 1872 and the camp meetings were generally a place for people to gather for song and praise services.

Although it is cited as one of the more popular camp meetings in Maryland, in 1876 the people of Emory Grove had lost the right to use the campground that had been in use for two previous years. The newspapers of the time did not report why this happened, but the camp was able to resume in 1879. During the interim time the Christian Advocate called on Washington Grove to open their camp meeting to the people of Emory Grove but not to help them maintain their autonomy. Washington Grove then printed an invitation on July 25, 1877 in the Montgomery County Sentinel for the people from Emory Gove to worship there. If you look at the photographs attached to this site, you can see that African Americans did come to Washington Grove but not if they stayed.

The camp meetings of Emory Grove ended in the 1960s and the land was largely rebuilt in the 1970s. The Emory Grove community is now spread out over the state but the congregation is still thriving. Images will be added after COVID-19 restrictions are lifted and I can resume research.

"A Town Within A Forest": The Walking Tour of Washington Grove, 1873-Present