Macomb Street is named for David B. Macomb. He was involved in many types of careers such as plantation owner, merchant, militia commander, county judge, and land speculator. His lived in Tallahassee only a short time, but left a lasting legacy behind. Macomb even dueled with Prince Achille Murat over an insult Murat had hurled at him. 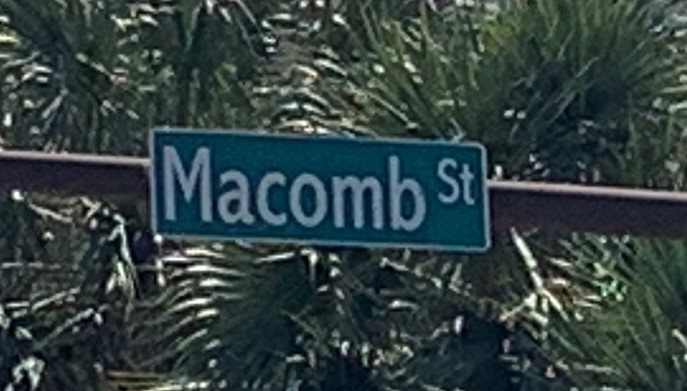 David B. Macomb was born in Detroit when it was still part of British territory. Much is not known of his younger years other than both his father and mother died when he was fairly young. Prior to moving to Tallahassee, he had lived for a time in Ohio where he met and married Mary Tiffin Worthington, daughter of United States Senator, and later Governor, Thomas Worthington. About 1825, Macomb left for Florida most likely due to mounting debts and bad business dealings in Ohio.

Upon arriving in Tallahassee, Macomb invested five hundred acres adjacent to the Southwood Plantation owned by George Taliafero Ward. He named his plantation Ben Venue on Loch Acray, which an apparent reference to Sir Walter Scott’s Lady of the Lake. Macomb was reportedly inspired by the landscape. Initially, Macomb was not a direct slaveholder. Instead, he hired slaves from other slaveholders. In 1830, though, he had become a direct slaveholder. According to the 1830 Census, in addition to Macomb, his wife, and five children, his household included two unidentified whites, fifteen slaves, and one free black.

During the late 1820s and early 1830s, Macomb involved himself in a number of money making schemes. He held postal route contracts for mail service, he practiced law, served as a county judge, and was appointed Justice of the Peace for a time. In a more exciting moment for Macomb, he engaged in a duel with Prince Achille Murat over an insult Murat hurled at him for a toast to Henry Clay. The two met several days after the insult. When they fired at one another, Macomb’s shot severed part of the little finger from Murat’s right hand. Murat then took aim and fired at Macomb only grazing him. Though Macomb escaped serious injury in this duel, troubles did catch up with him later.

By 1835, some of the financial issues Macomb experienced years earlier in Ohio plagued him once again. He also had mounting unpaid promissory notes from his business dealings in Florida. Much of his property was seized by a United States Marshal on a court order. To escape his financial troubles, Macomb chose to move to Texas and leave his family behind until he could move them out. He joined the staff of Colonel Stephen F. Austin as Texas forces first began to engage the Mexican Army for independence. Later in 1835, he was commissioned as an artillery officer as a regular in the Texas Army. In the fall of 1836, Macomb was able to return to Florida to move his family out to Texas. During the trip, his wife developed a swift acting form of Tuberculosis, referred to as galloping consumption. She died in October 1836 in Lynchburg, TX not far from Houston. Four months later, likely in a fit of depression over the loss of his wife, David B. Macomb committed suicide.