In the beginning the Southern Pacific left just a boxcar to serve as a depot and office. But by the end of 1887 the depot had been constructed. Materials for the depot arrived on a flatbed rail car as flat panels which could be assembled into a variety of configurations. Our Fillmore depot is the smallest of the sizes. Within the Depot you will find exhibits showing how travel was in the late 19th Century. model train displays, history of the citrus industry and other agriculture in the valley, as well as information regarding the St. Francis Dam Disaster, the worst US man made disaster of the 20th Century. 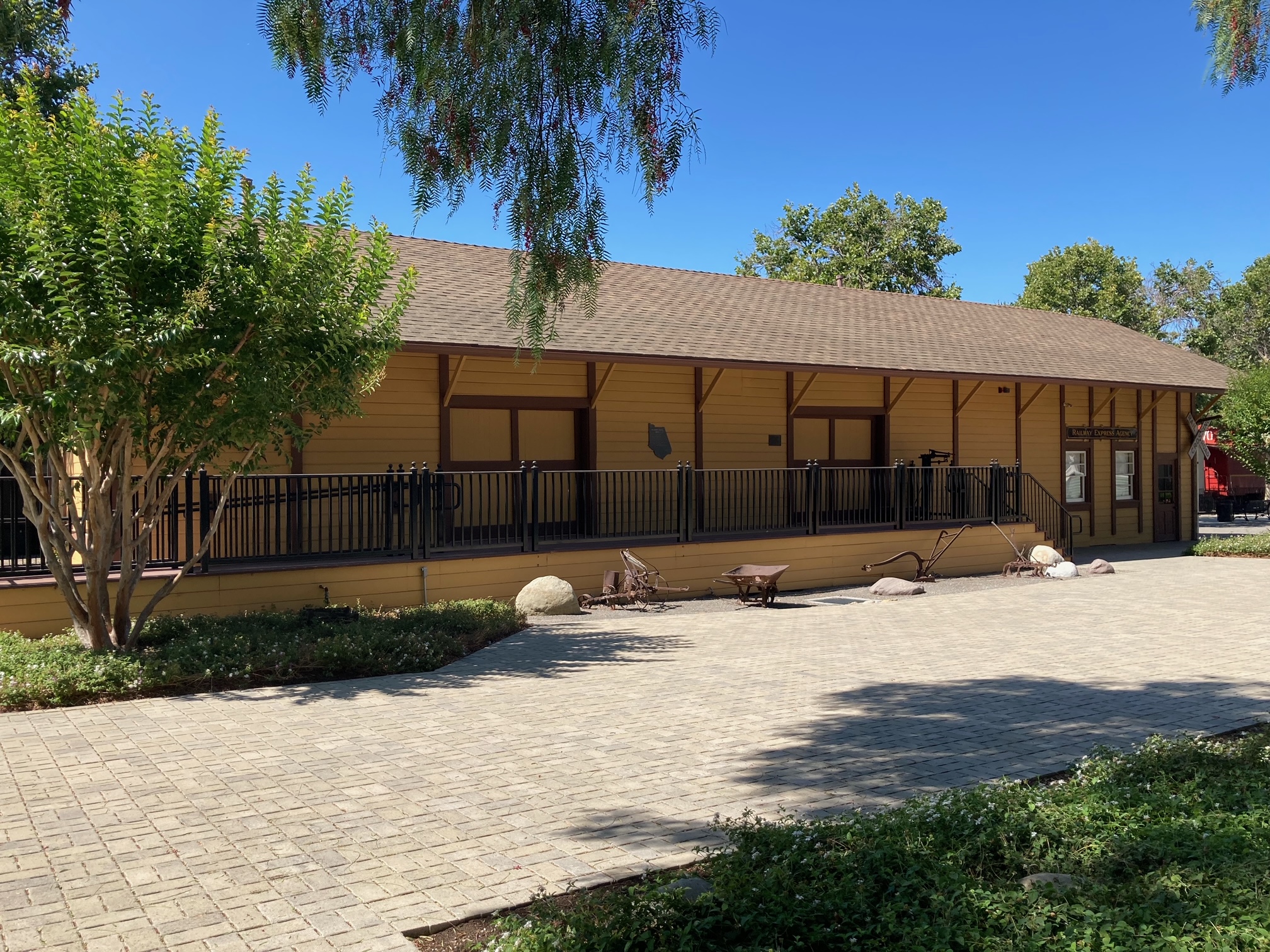 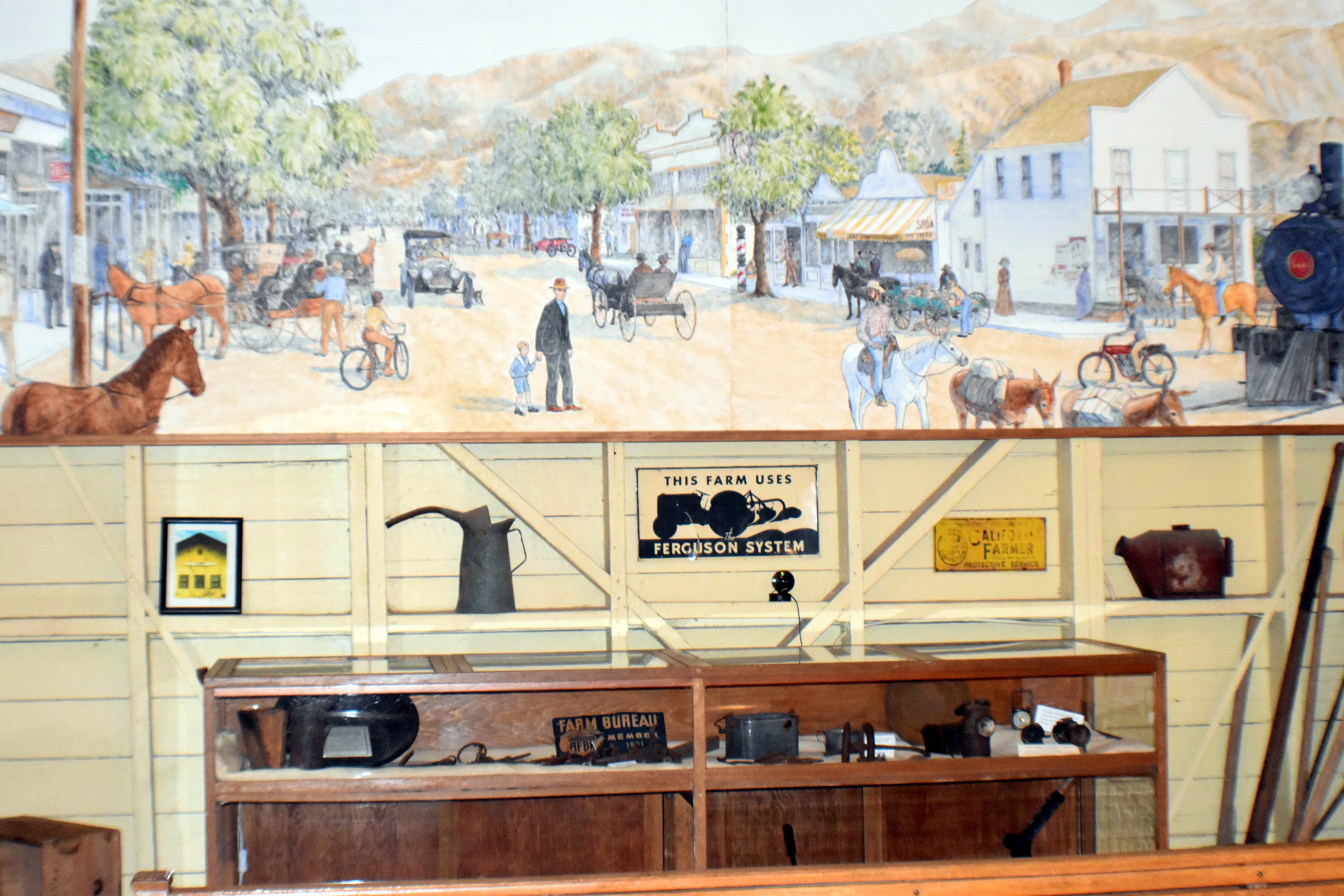 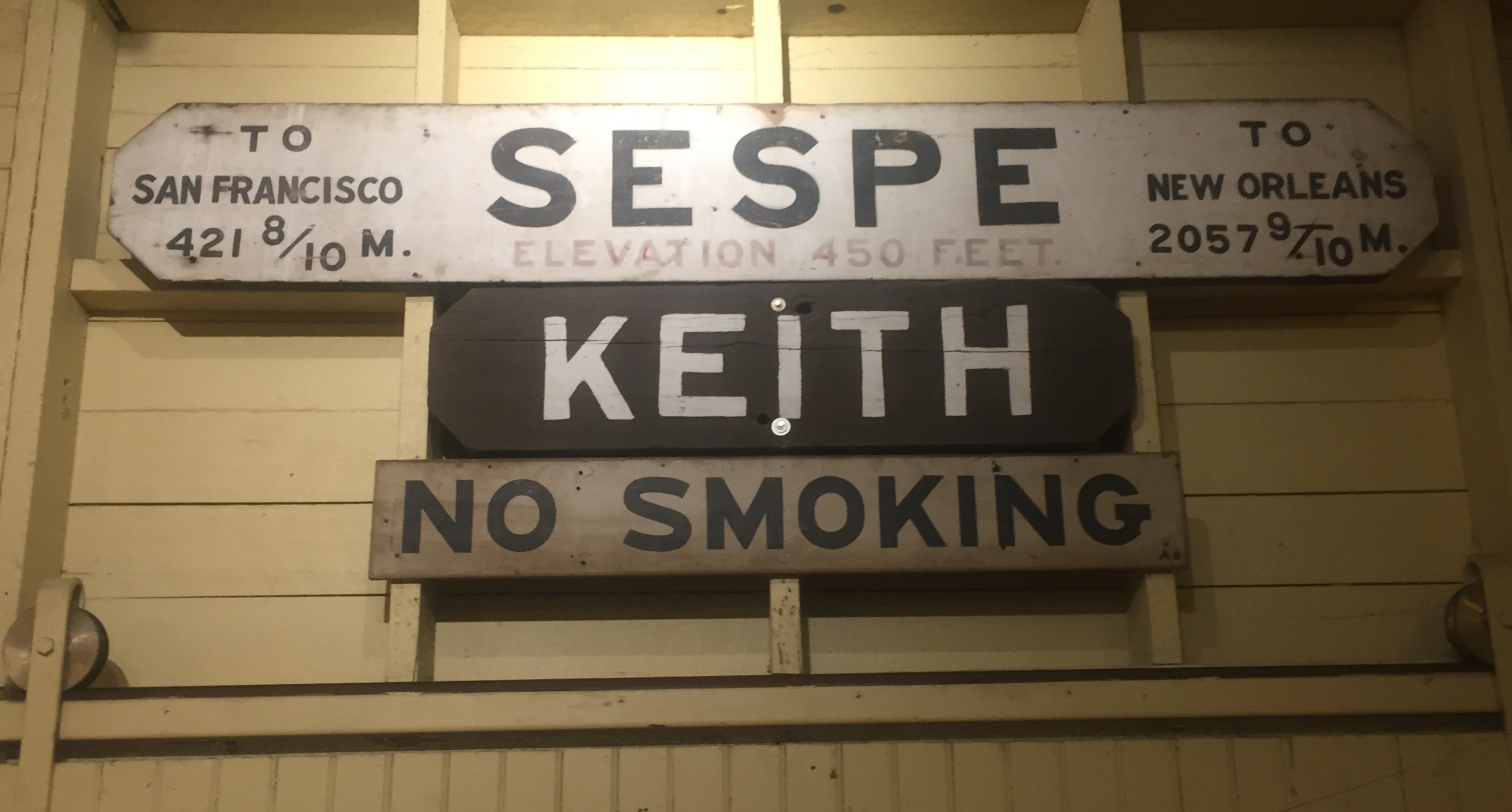 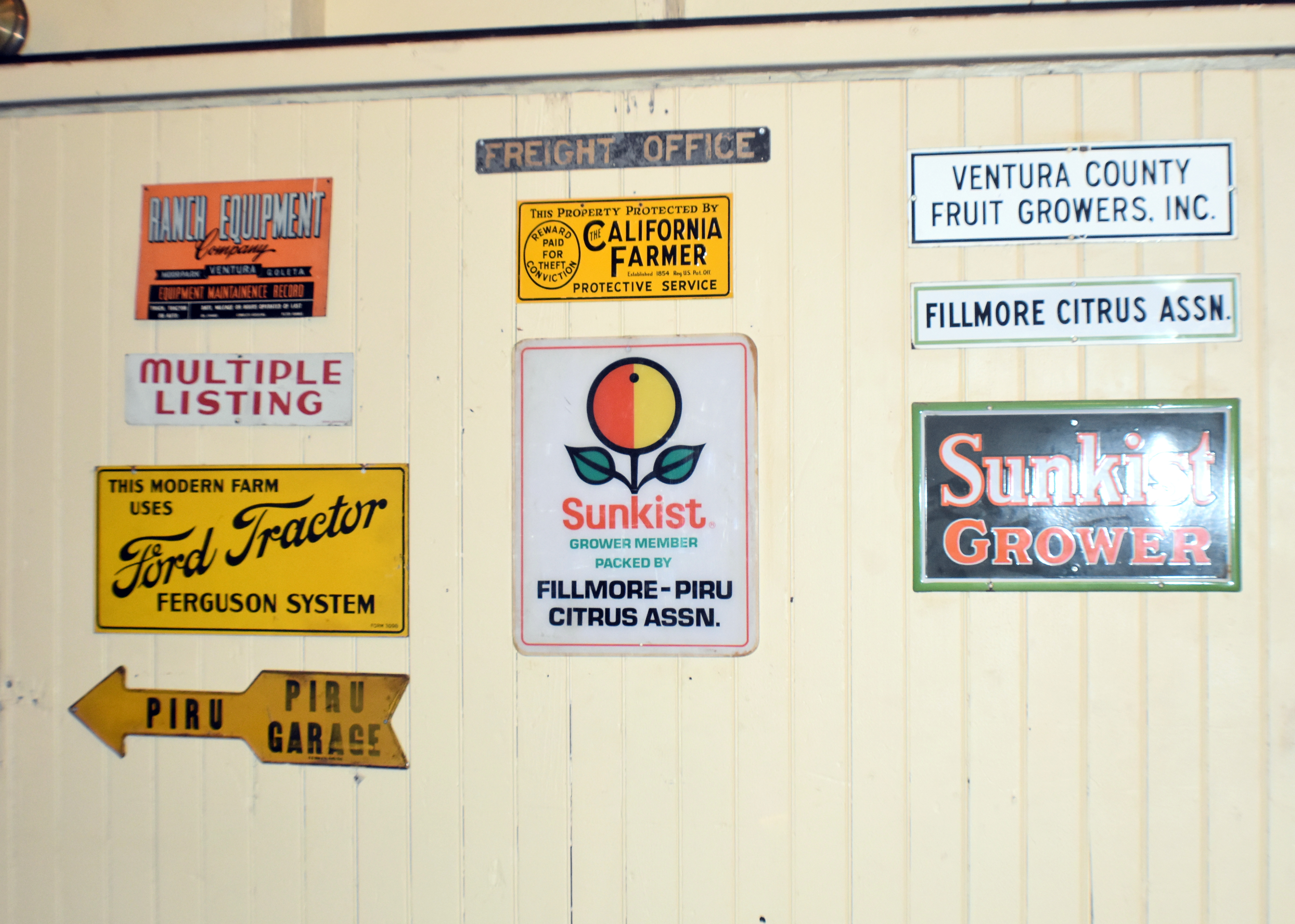 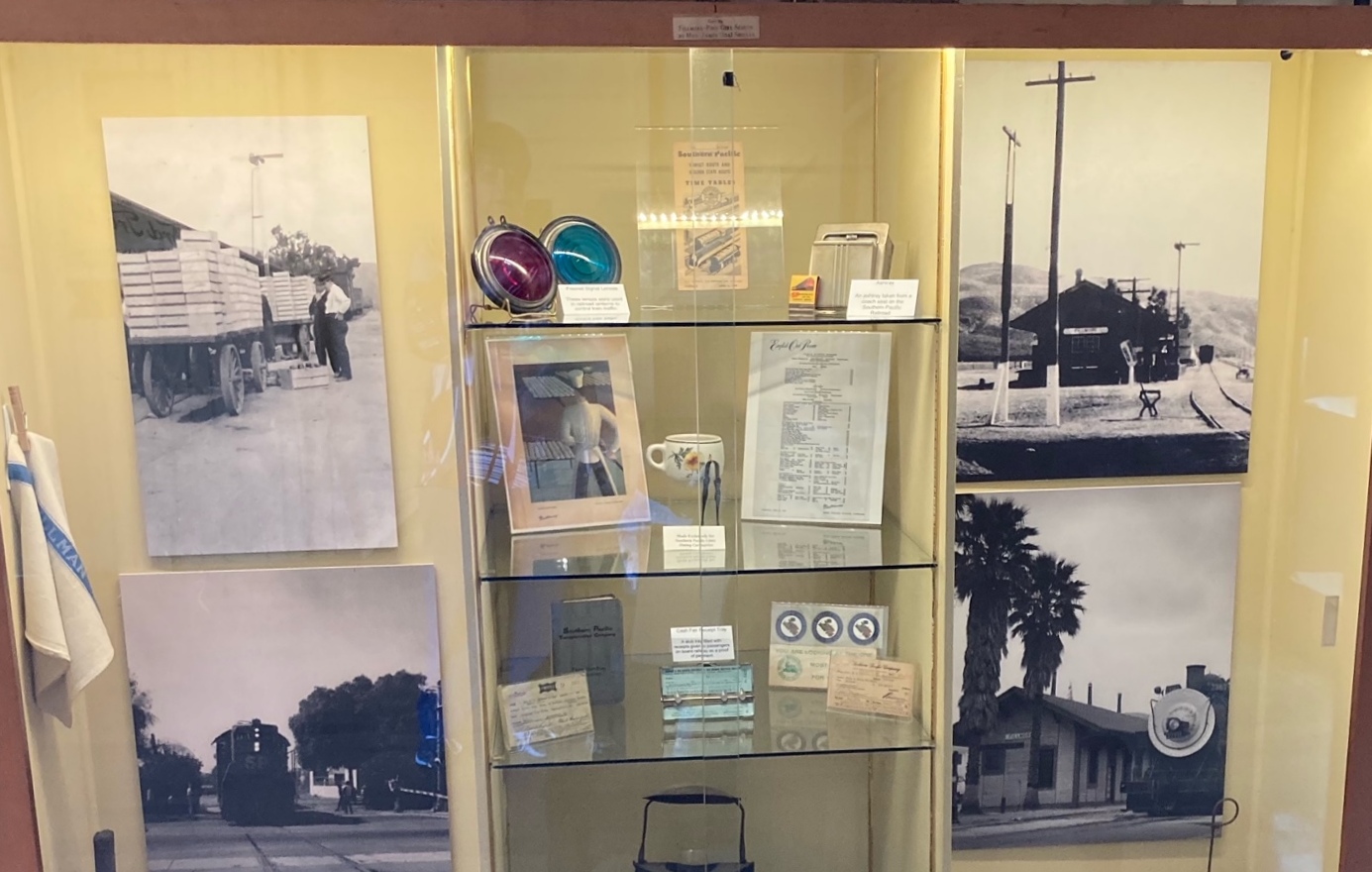 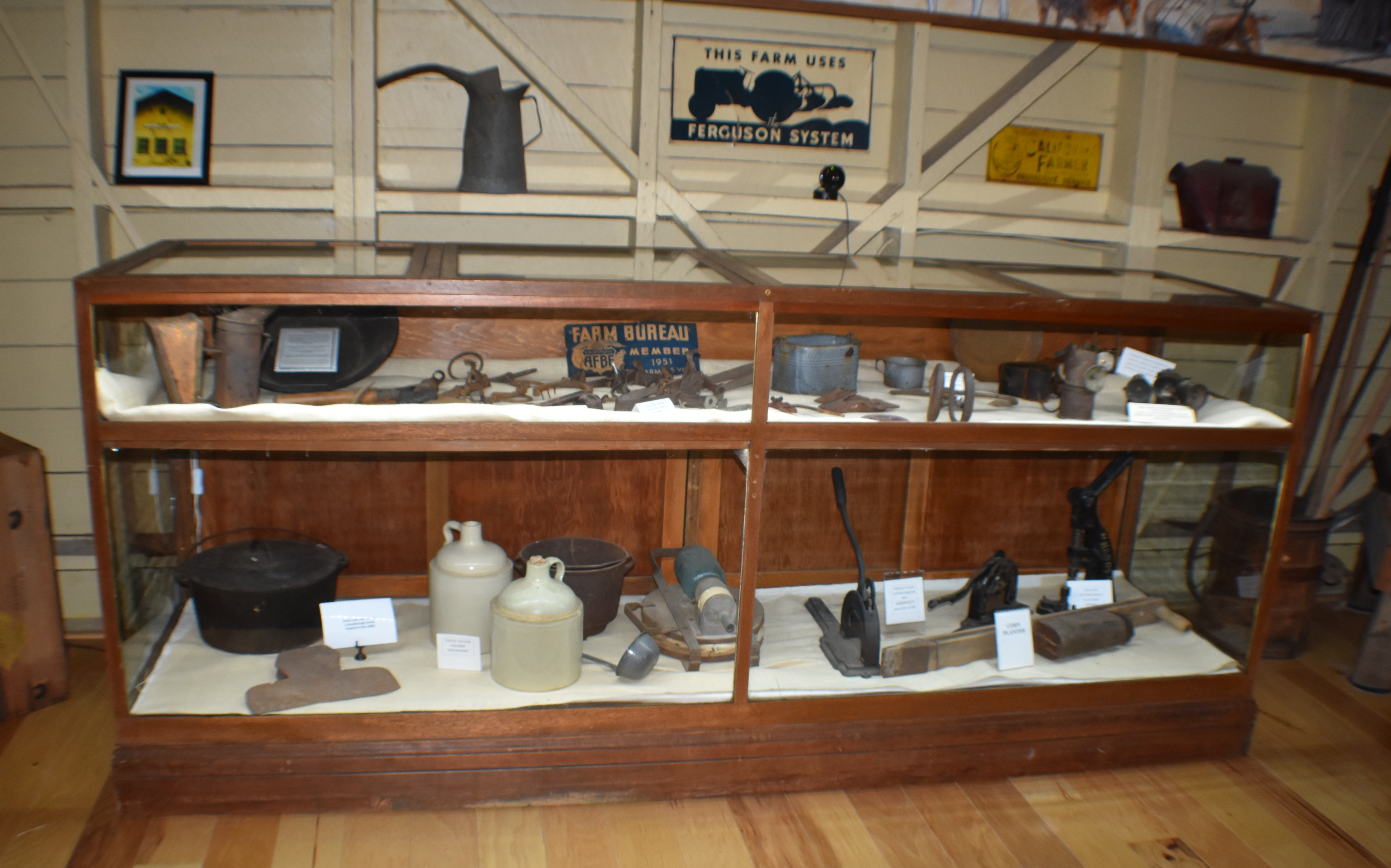 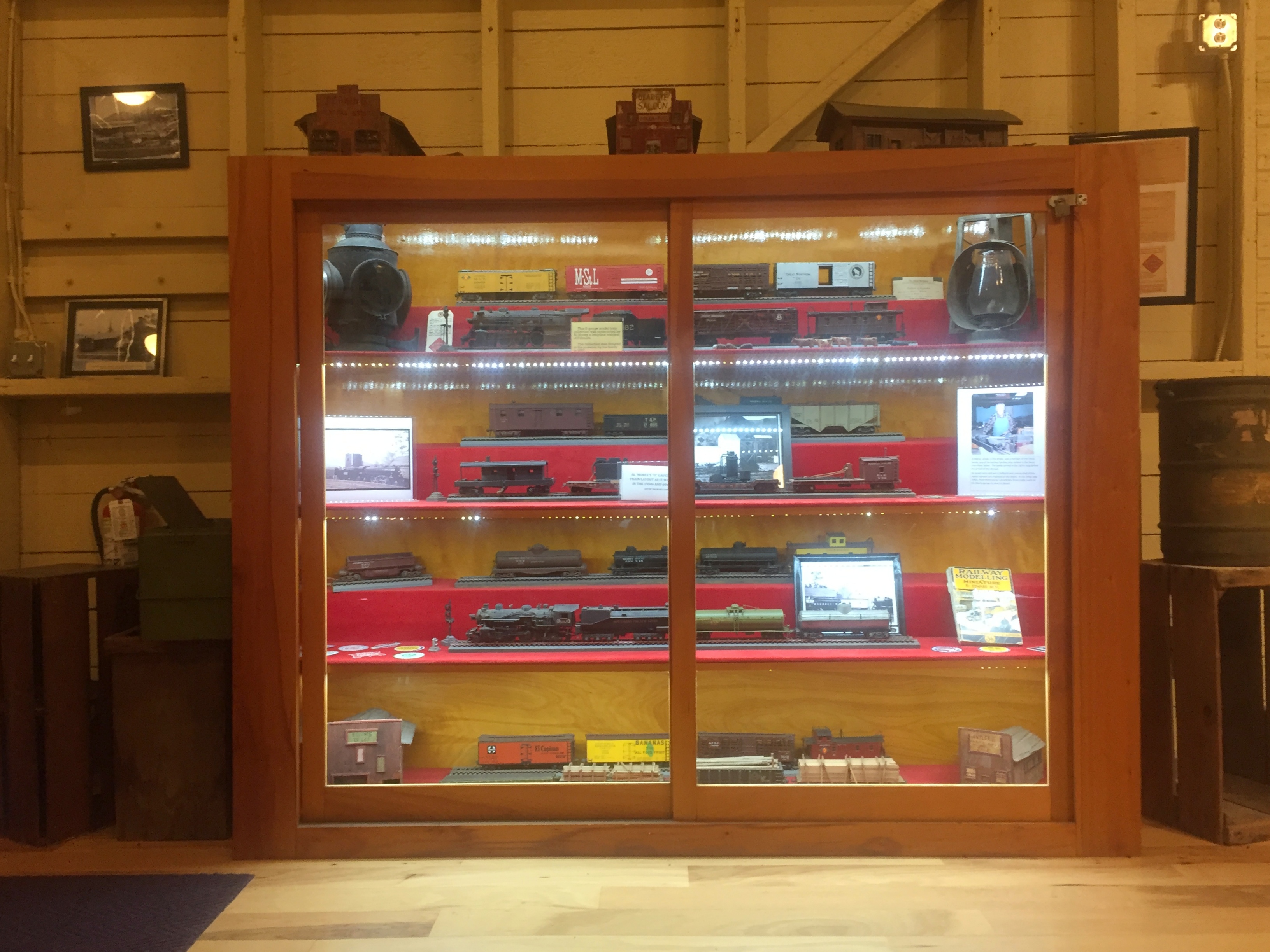 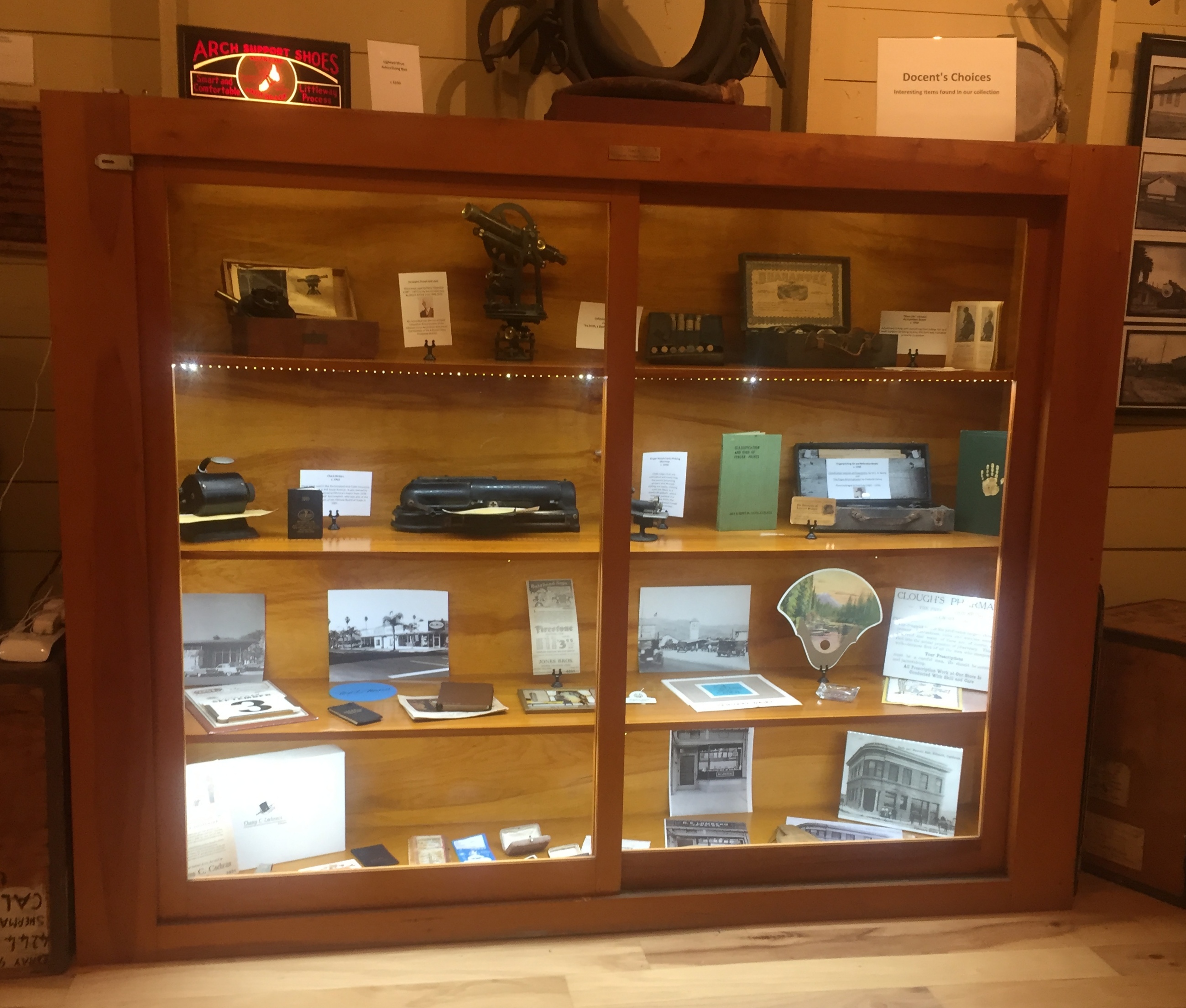 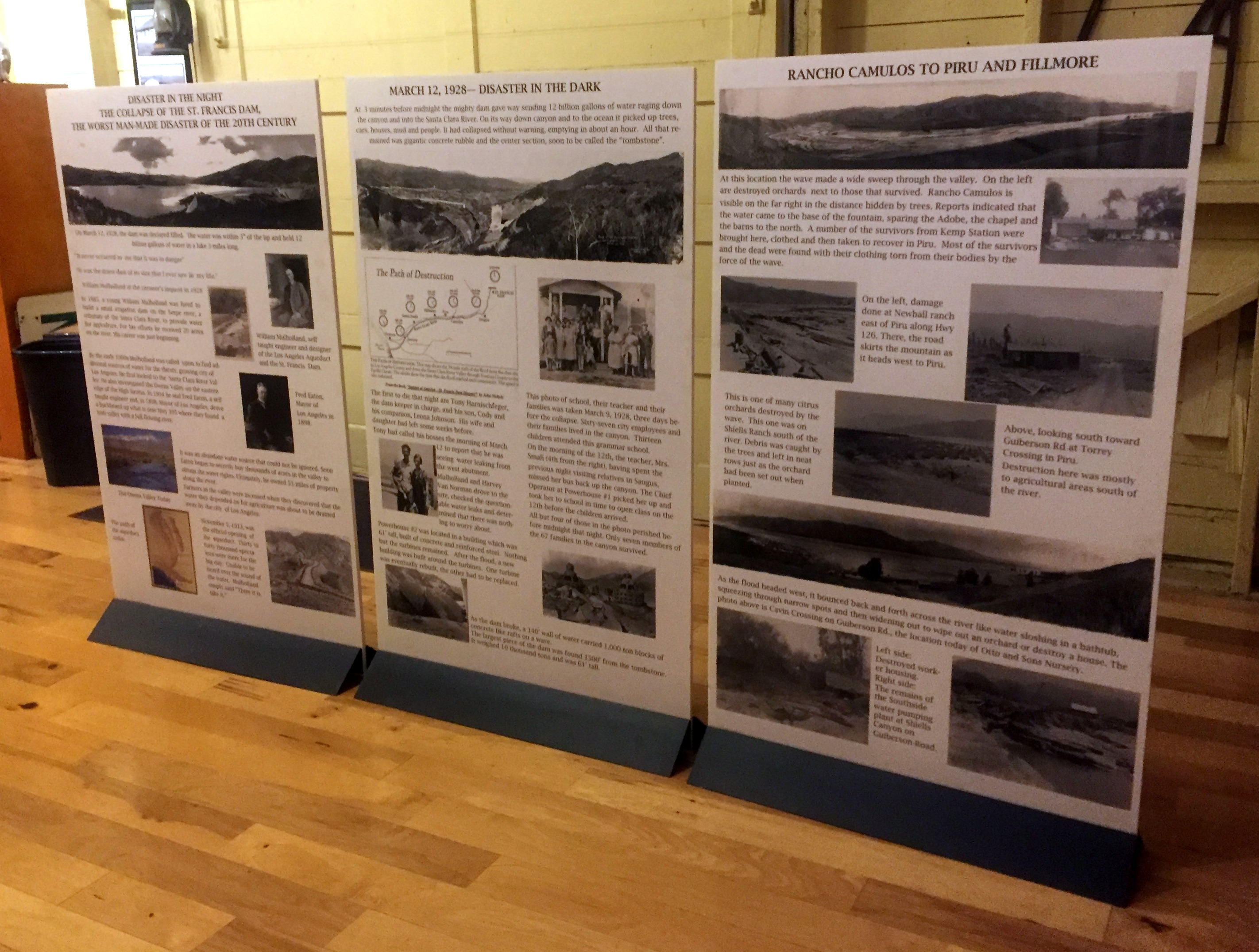 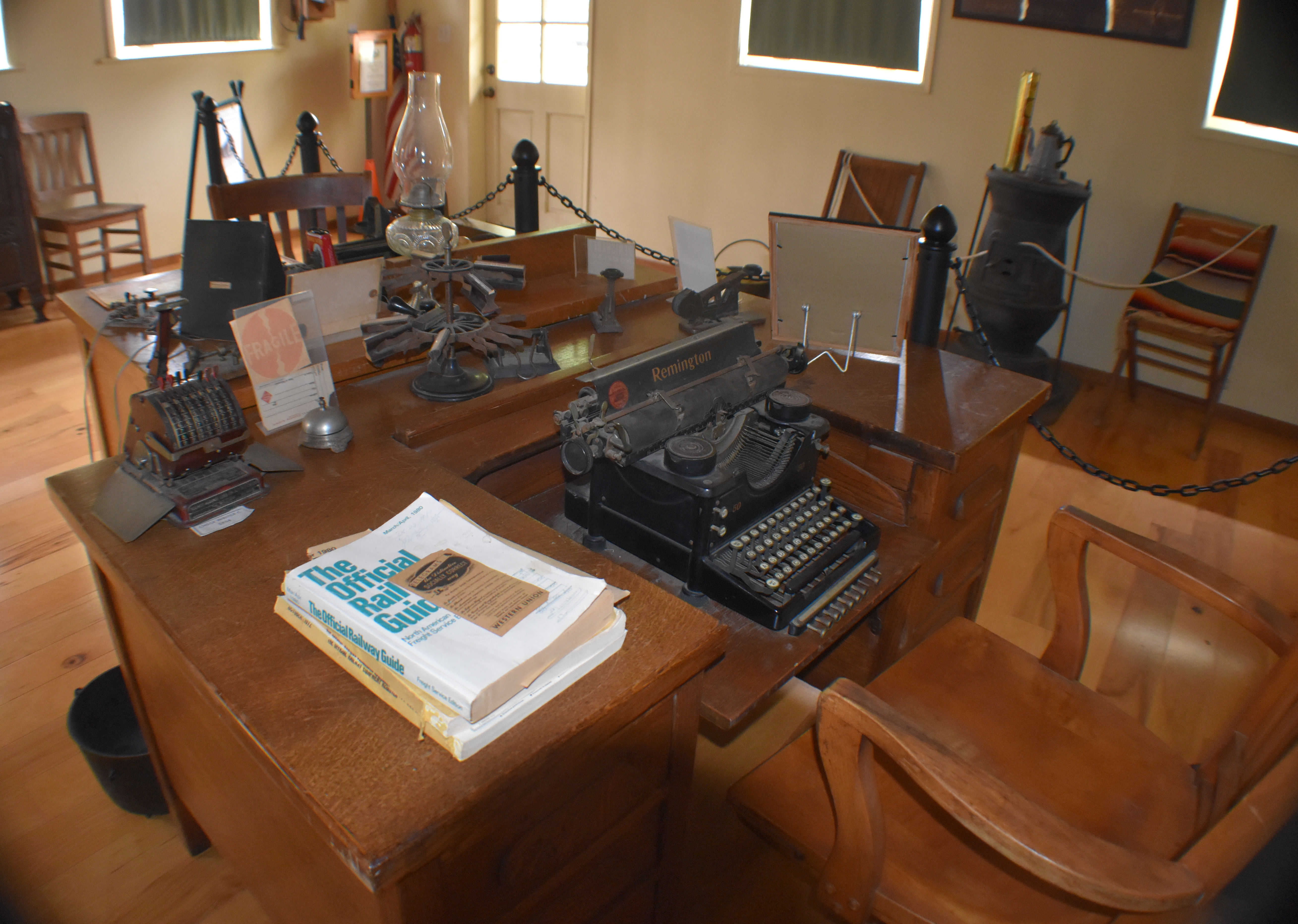 When you enter the Southern Pacific Depot, one of the first things you will notice is the mural which fills the east wall. This is the work of the late John Brothers, former art teacher at Fillmore High School, and represents Central Avenue at the turn of the 20th century. On the opposite wall you will see a display of fruit crate labels from the Santa Clara River Valley. Each packing house would have unique crate labels for its different citrus and for different grades of citrus.

On the walls of the depot are signs from different businesses and packing houses that served the area. You will see the signs “Sespe” and “Keith”. These marked train stops just west of Fillmore. “Keith” was the private stop for Keith Spalding, husband of Eudora Hull Spalding, owner of Ranch Sespe. If he wished the train to stop so he could go into Los Angeles (their main home was in Pasadena) all he needed to do was raise a flag and the train would stop for him.

Early farm implements and railroad memorabilia are also on display throughout the Depot.

The Museum was given an extensive model train collection by Fillmore resident, Al Morey. A portion of these are on display in a case on the north wall of the Depot. Mr. Morey was an oil worker, but his heart was with trains. He rode on many historic trains and worked as an engineer with various train clubs in the area. When he wasn’t able to “play” with real trains, he built his own models.

On the south wall is the “Docent’s Choice” display cabinet. These are items that piqued the interest of our volunteers who wanted to share their finds with our visitors. There is no theme to the exhibit other than curiosity.

An important display shown on several panels in the middle of the Depot, is the story of the St. Francis Dam collapse. It occurred on the night of March 12-13, 1928 at 11:57 pm. The dam, which was built by Los Angeles Water and Power under the direction of William Mulholland, suddenly collapsed sending 12 billion gallons of water down the Santa Clara River Valley killing approximately 450 people. It took 5 hours to reach the Pacific Ocean. At the later inquest, Mulholland took full responsibility for the worst U.S. civil engineering failure of the 20th century and resigned his office. During the coroner's inquest he said, "The only people I envy in this whole thing are the dead."

Walking down the stairs, you will find the Depot office complete with safe, telegraph and telephone switch board. The Depot had the first phone box in Fillmore with the telephone number “1”. This remained active until direct dialing was initiated in the early 1960s.