This monument honors residents of Logan County who served in World War I. It is one of many statues mass produced in the 1920s-1930s called, “The Spirit of the American Doughboy” originally envisioned by E.M. Viquesney. According to enthusiasts, this statue is one of 134 intact monuments of the series. The monument in Logan County is sometimes referred to as the Pete Minotti Memorial, named so after the Italian immigrant and local contractor largely responsible for the establishment of the statue in the town. Minotti worked for several years with the members of the Logan American Legion and local community in support of the monument. He spoke before a large crowd on the day that the monument was dedicated, November 11, 1928 and was presented with a miniature doughboy statue in recognition of his efforts. 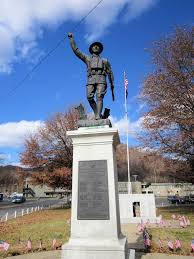 A Logan Banner picture of the November 11, 1928 dedication of Logan’s Doughboy. 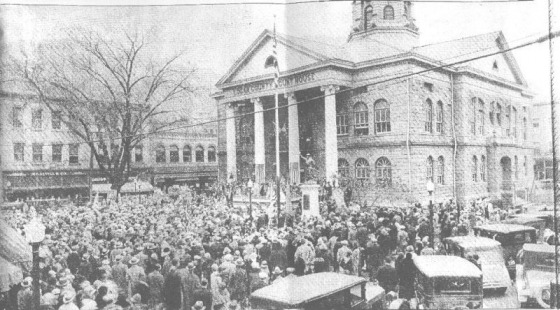 This statue was one of many mass produced in the 1920s and 1930s based on an original dubbed, “The Spirit of the American Doughboy”. E.M. Viquesney envisioned the work in the summer of 1918 prior to the conclusion of the ‘Great War’. He created the work as a commemoration of those who served in the war. Other sculptures bore the same resemblance of a soldier bearing a bayonetted rifle in the left hand and hand grenade in an outstretched, elevated right hand while traversing ground riddled in tree stumps and barbed wire; it was intended to recreate the conditions in which military members were forced to fight. The materials for making the Doughboys varied slightly while some were molded with zinc, bronze, or stone. Some sources interpret the meaning of the statue to be one that would make the thought of war less appealing. Viquesney continued his career in sculpting into the second world war prior to taking his own life in 1946.

Peter Minotti was born in Favaro, Italy in 1885 and eventually immigrated to Logan, West Virginia. His idea to create this monument was influenced by practices in his home country of erecting monuments in honor of fallen horses. With adoration of his new country, Minotti began working to establish the structure in his hometown. Local publications long boasted the excitement regarding the statue’s presence. One specific article in the Logan Banner from the time reads, “The monument will be 19 feet high, says Pete Minotti, local contractor, who is backing and taking the leading part in providing a suitable memorial for Logan county’s heroic dead. The base will be hidden by an earthen mound or terrace on all four sides. Dedication of this memorial will be the feature of this year’s celebration of the signing of the Armistice on November 11.” Working alongside the American Legion and Boy Scouts who assisted in funding and dedication day ceremonies, was successfully completed as mentioned on armistice day November 11th, 1928. The superintendent of Huntington schools was also present and served a speaking role during the ceremony, further asserting the importance of the ceremony.

To the locals of Logan County, the memorial served an important figure for the remembrance of those who served in The Great War. Minotti was likely further influenced to become such a proponent for the statue’s dedication given the strong sense of national sentiment. Verdunville of Logan county was named after the battle of Verdun. Thus, it makes sense that the monument was received with such praise locally and very obviously adored in the Logan Banner.

Throughout the decades following its dedication, the Doughboy fell victim to vandalism and was in disrepair. It was moved to Middelburg Island in 1964, where it suffered further damage. In 1983 however, the Doughboy Committee was formed by Logan High School JROTC instructor Ray McKinney. The 11-member committee mainly consisted of former veterans from World War II, Korea, and Vietnam. Together, they managed to secure $37,000 in funds to restore the monument.

With a reinvigorated sense of nostalgia and sentiment towards the war memorial, the Doughboy statue was rededicated in 1983 along with the establishment of War Memorial Park. In addition to the refurbished Doughboy memorial, the park honors fallen soldiers from World War II, the Korean War, and the Vietnam War with a smaller memorial wall including the names of local military members who lost their lives during the respective conflicts. Now with a committee to advocate for the betterment of the site, more memorials have since been added which list local veterans who have served in conflicts since Vietnam. Today the doughboy stands between Logan Middle School and Logan Football Stadium on Middelburg Island.

Kirk, B. R. (2019, August 26). World War I Statue in Logan, WV. Retrieved from Brandon Ray Kirk ~ This site is dedicated to the collection, preservation, and promotion of history and culture in my section of Appalachia.: https://brandonraykirk.com/2019/08/26/world-war-i-statue-in-logan-wv-1928/