The first home of the Abbot Female Seminary, Abbot Hall is an exceptional early Greek Revival building. Possibly inspired by Charles Bulfinch's Massachusetts General Hospital in Boston (1818), Abbot Hall is a very early example of what became typical of Greek Revival style public and institutional buildings around the United States during the 1830s and 1840s. The architect of Abbot Hall is unknown as are details about the suppliers or the masons. Records indicate that David Hidden of Newburyport was master builder and that William Saunders of Cambridge fabricated the Ionic columns that support the front portico. The building faced School Street when it was first erected. There was a large central room on the first floor and a recitation room on either side.The room on the north side was for the children, and that on the south side was for the older scholars. The back piazza was added during the period of Asa Farwell's leadership, 1842-1852. In 1875 an observatory dome on the top of the building was added to accommodate a telescope purchased that year for approximately $2,400. The Academy Building, estimated at the time to weigh 900 tons, was moved to its present location in the summer of 1888. In 1890 the name was officially changed to Abbot Hall in honor of the Academy's first benefactor. Around 1900 the building was remodeled to make it a science building so that the common usage of Graves Hall with Phillips Academy boys could be discontinued. Further renovations were accomplished in 1906-1908 to provide a larger observatory. In 1907 the Boston firm Andrews, Jacques, & Rantoul added a museum, the John-Esther Art Gallery, to the east end of Abbot Hall to house art studios and an art collection donated by Esther Byers. Since its founding, Abbot Academy had offered drawing and painting classes. Following the merger with Phillips Academy in 1973, the building became idle. From 1978 to 1990 Abbot Hall housed the Northeast Document Conservation Center. In 1997 Abbot Hall was restored as part of Phillips Academy's renewal and rededication of the Abbot Circle.

Sketch of Abbot Hall as it looked in 1829 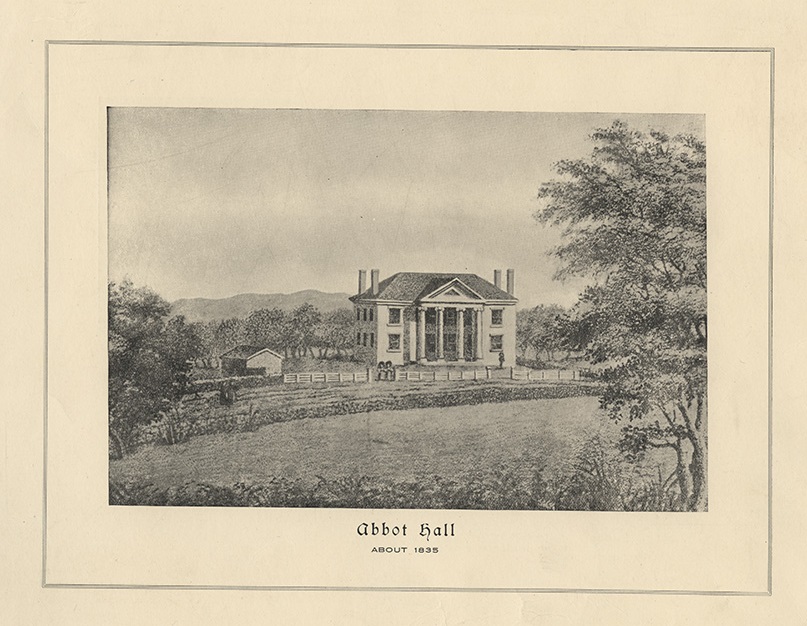 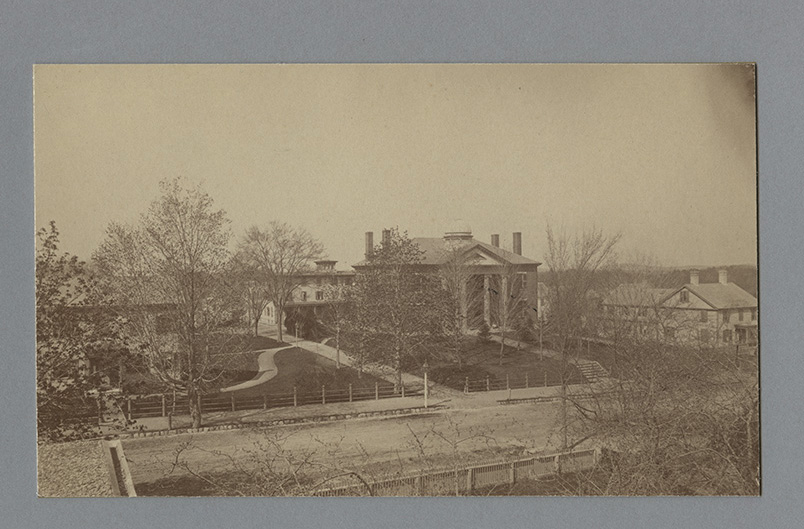 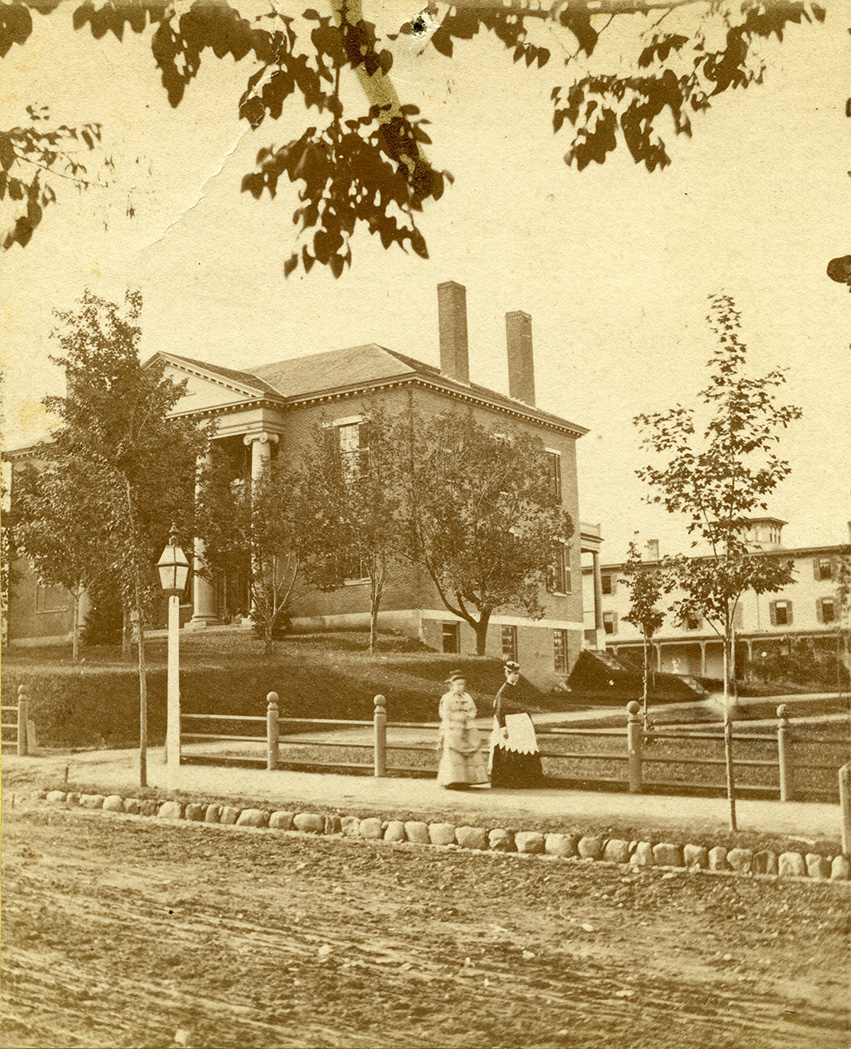 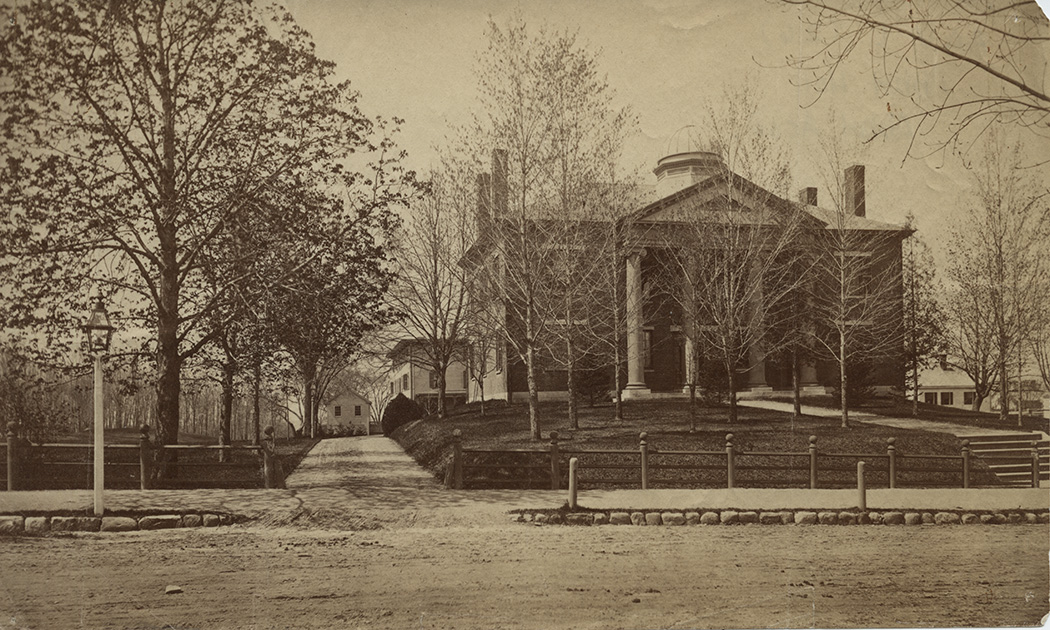 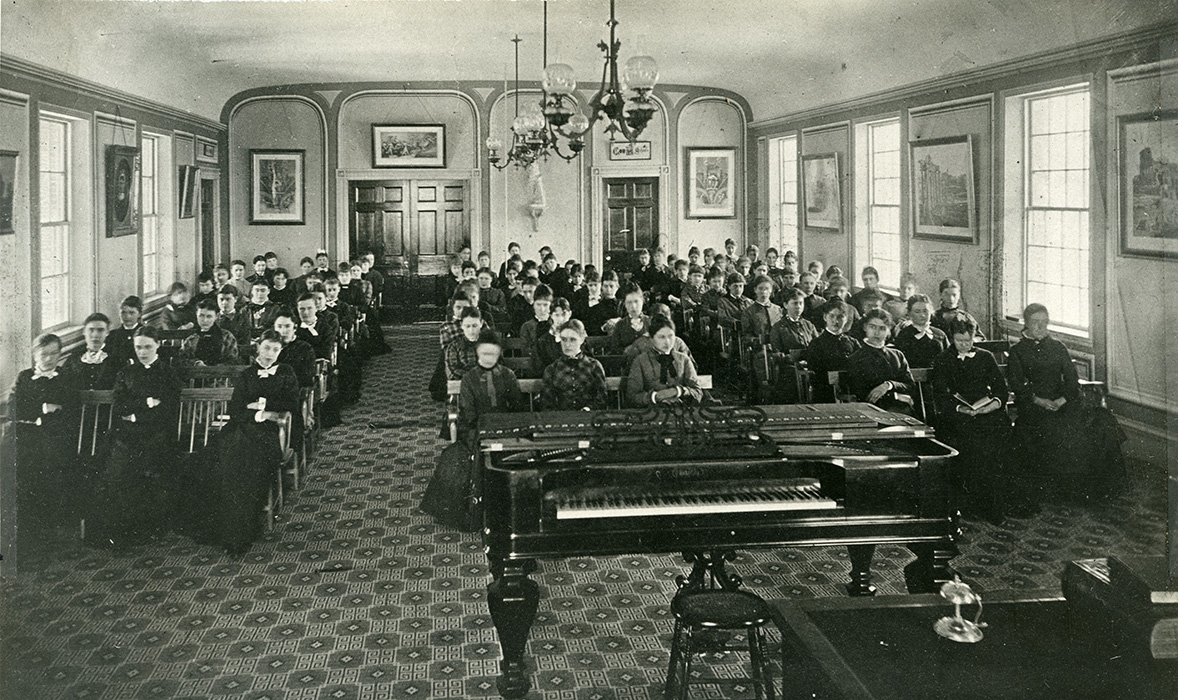 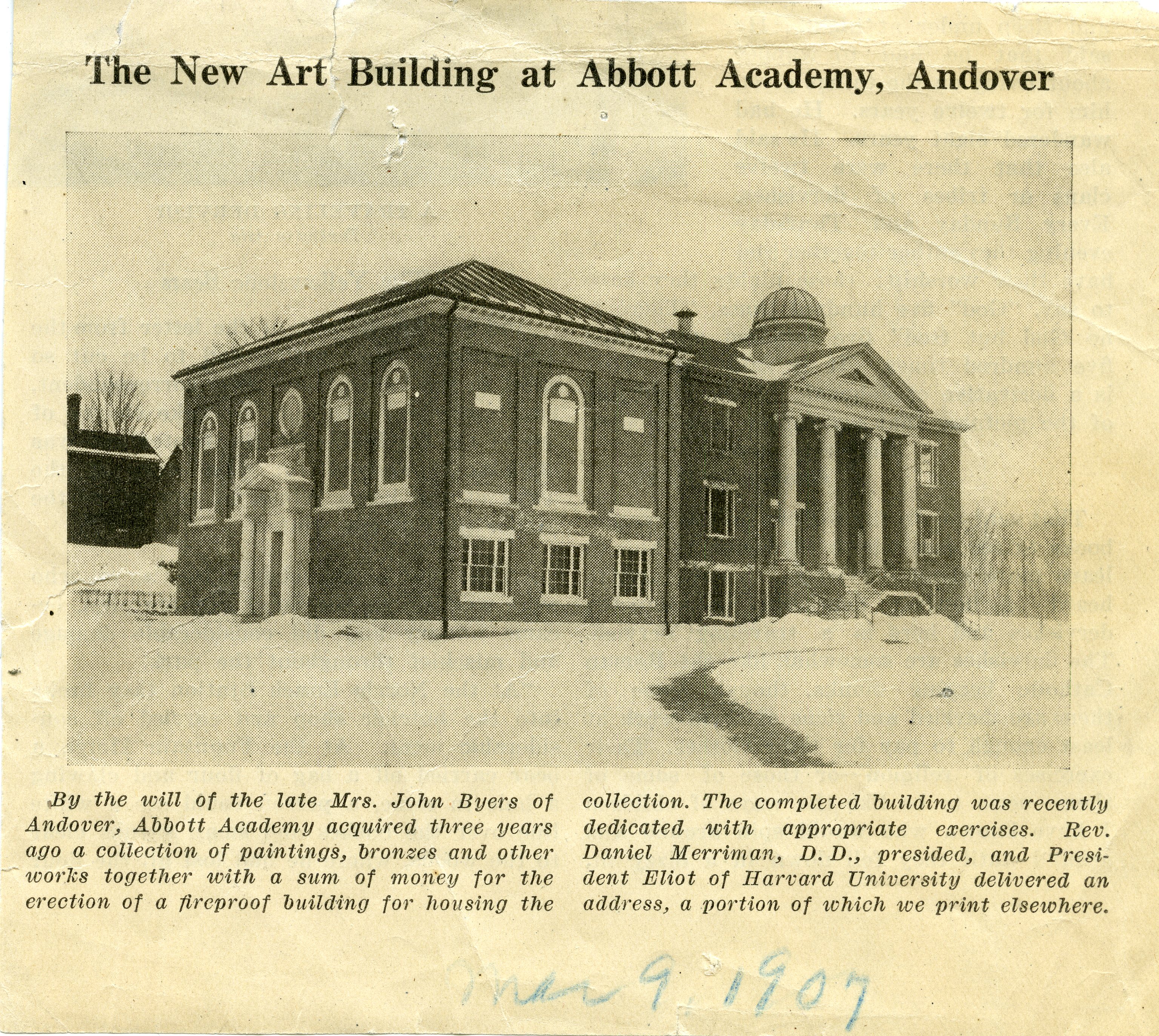 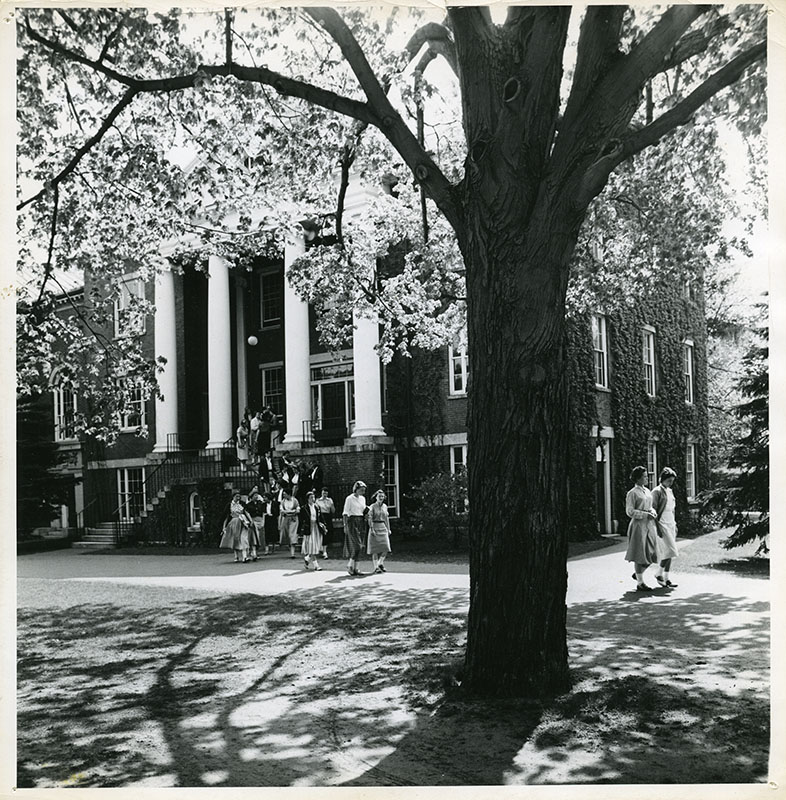 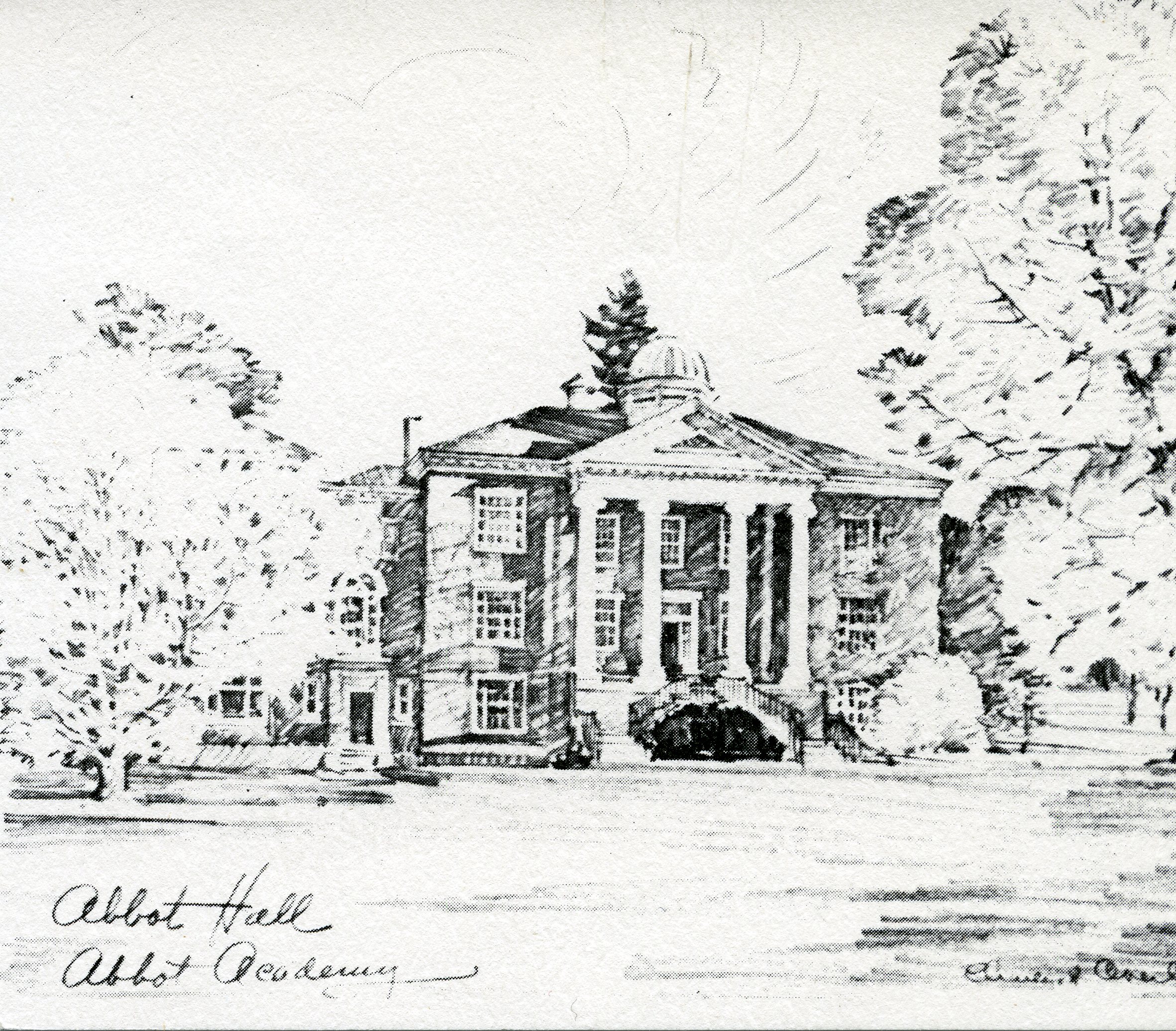 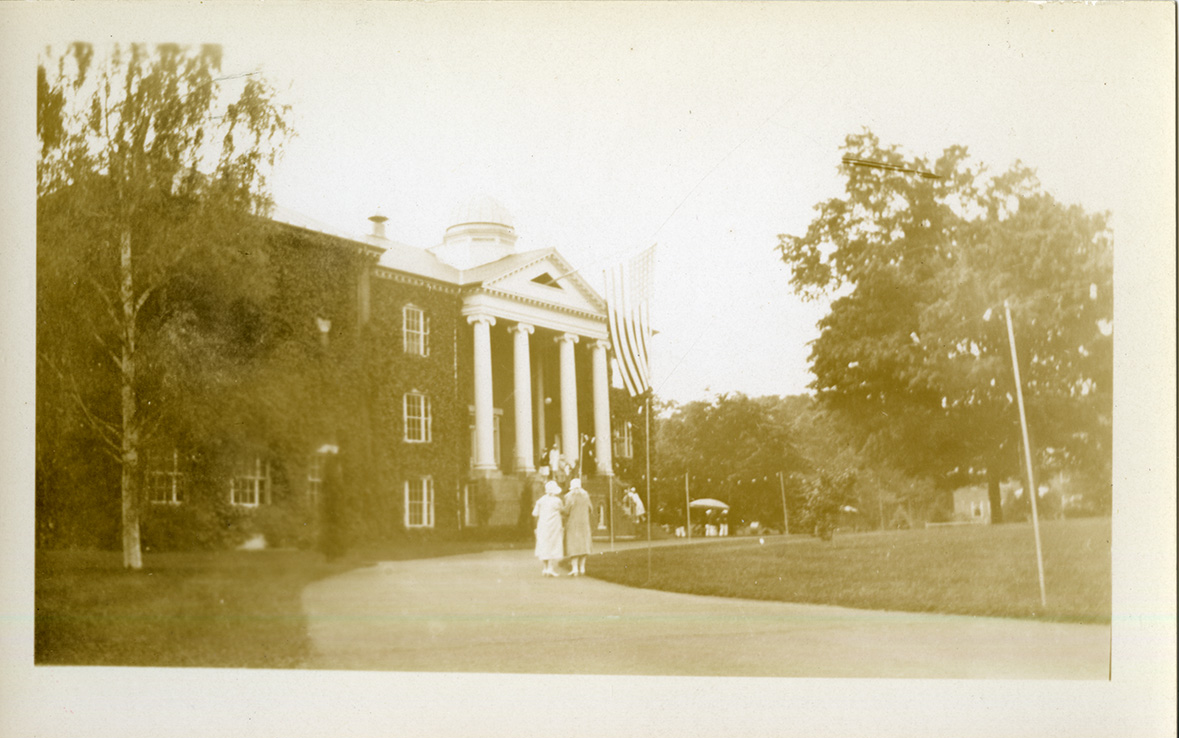 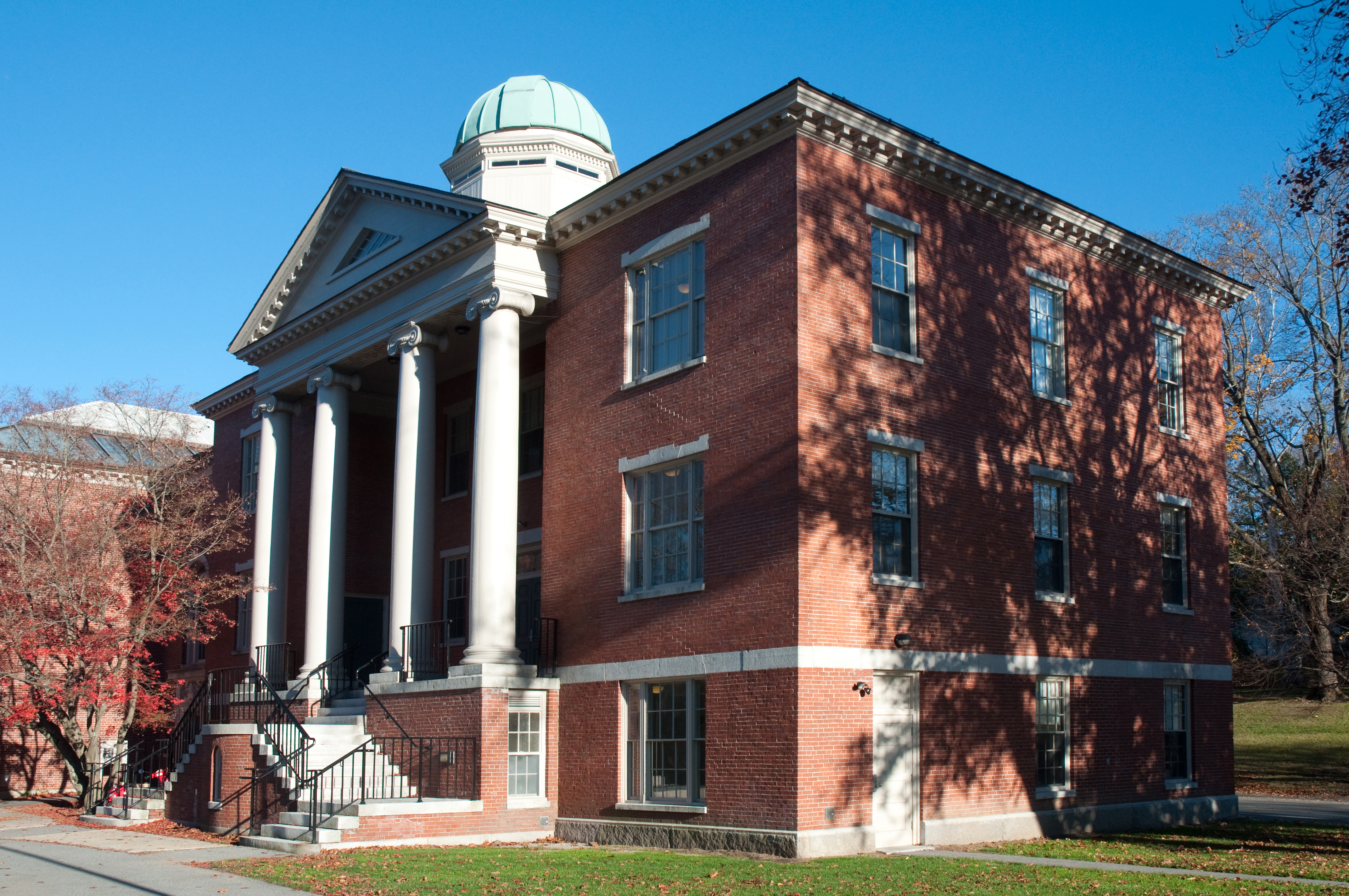 In February 1828, several of Andover's most prominent citizens, including Samuel Farrar, treasurer of Phillips Academy, and Mark Newman, principal of Phillips Academy from 1795 to 1809, met to consider the establishment of a high school for local girls. A committee of seven men was appointed to select a suitable site, the type and cost of a suitable building, the most promising method of raising the necessary funds, and to develop a schedule for the fundraising. These men, who became Abbot's founding trustees, were part of a larger group that had been committed for some time to establishing a school for young women. The group included Phebe Phillips, wife of one of the founders of Phillips Academy, who died before Abbot became a reality; Caroline Jackson, wife of founding trustee Samuel Jackson; as well as several wives of ministers, schoolmasters, and Andover Theological Seminary faculty. They bought a lot on Main Street and erected a fence, but the site raised concern among the parents of prospective students. The mothers objected to Main Street because "Theologues and academy boys" frequently passed that way. Mark Newman donated a one-acre lot, and Sarah Abbot pledged $1,000. By the time her will was probated in 1830, she had donated more than $10,000 to Abbot Academy. Until 1863, Abbot's campus was limited to one acre.

Construction began immediately, and Abbot Female Academy opened May 6, 1829 with seventy students. The course offerings were "a very liberal series of studies" that included Greek and Latin, history, geometry, algebra, theology, French, Italian, German, English literature, music, botany and mineralogy as well as access to chemistry and geology lectures at Phillips Academy. The Abbot curriculum, which came to be known as the "Academic Course," was essentially a wide-ranging and scholarly education for life. Often a woman would pursue her studies for five years, not graduating until age 22 or 23. Preparation for college was neither an issue nor even a possibility. Not until New England's colleges for women were established later in the century would a baccalaureate degree be seen as a viable alternative to the course of study that Abbot offered.

Like Phillips Academy and Andover Theological Seminary, Abbot Academy had a traditional Calvinist theology at its core during the 19th century. Historian Susan Lloyd describes Abbot's foundations as "a double commitment to basic intellectual training and moral guidance, a commitment strengthened by a habit of resistance to passing fashions, and by--above all--a respect for the importance of women in American society." Indeed, for a period during the 19th century, the school was called Abbot Female Seminary.

Known later as Abbot Hall, the Academy building initially provided only classrooms and recitation rooms. A residential building was not constructed until 1854, when Smith Hall was erected. Abbot Academy officially merged with Phillips Academy in 1973.