One of the key turning points of the Civil War, the Battle of Antietam began at dawn on September 17, 1862, near Sharpsburg, Maryland. Neither side was able to claim a decisive victory and both endured tremendous casualties. Antietam became the bloodiest one-day battle in American history, with more than 23,000 casualties. Confederate General Robert E. Lee was forced to withdraw from the field due to his losses, ending his first invasion of the North. Although Union General George B. McClellan decided that his forces were too decimated as to pursue Lee's Army, the battle ended with General Lee's Army retreating to Virginia. President Abraham Lincoln had hoped for a Union victory before announcing his Preliminary Emancipation Proclamation. While Antietam was equally devastating in terms of casualties, the fact that Lee's Army had withdrawn from Pennsylvania allowed Lincoln to announce his intention to end slavery at a moment when confidence in the Union cause had been restored. Lincoln's declaration would appear as a thoughtful and deliberate measure rather than a desperate act by a President who was attempting to use an Executive Order to strike a blow to the South that his armies could not deliver.

The Battle of Antietam ended the Confederate Army of Northern Virginia's first invasion into the North and led to Abraham Lincoln's issuance of the preliminary Emancipation Proclamation. 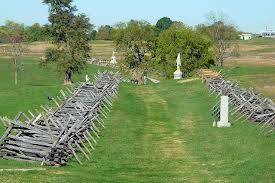 James McPherson, Crossroads of Freedom: Antietam-Click the link below for more information about this book 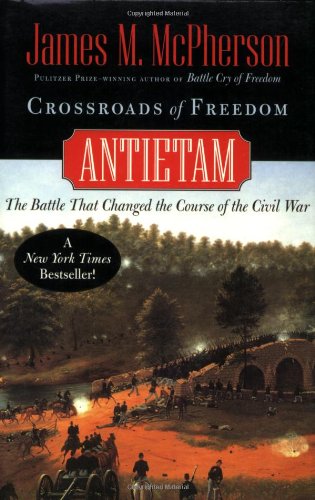 David Hartwig, To Antietam Creek: The Maryland Campaign of September 1862 -Click the link below for more information about this book 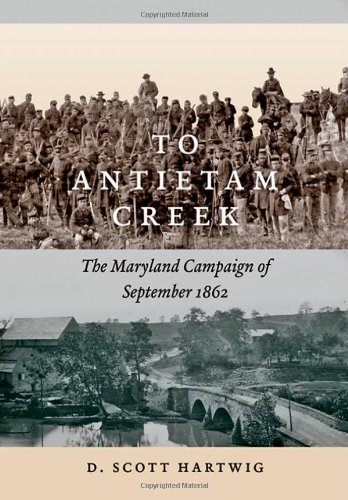 Antietam's Visitor's Center is open year-round and offers a short film and exhibits, as well as a chance to talk with park rangers and schedule a guided tour. 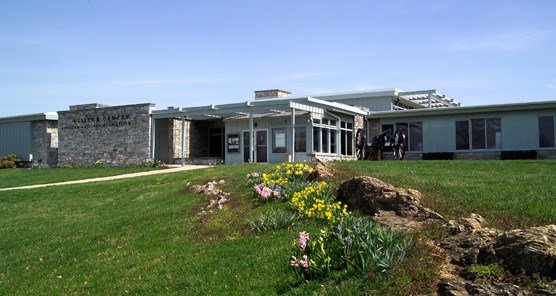 Union General George B. McClellan led the Army of the Potomac to Antietam as part of the Maryland Campaign. While McClellan drove Lee into retreat, President Lincoln wished he had actively pursued Lee's forces, leading to McClellan's removal. Wikimedia Co 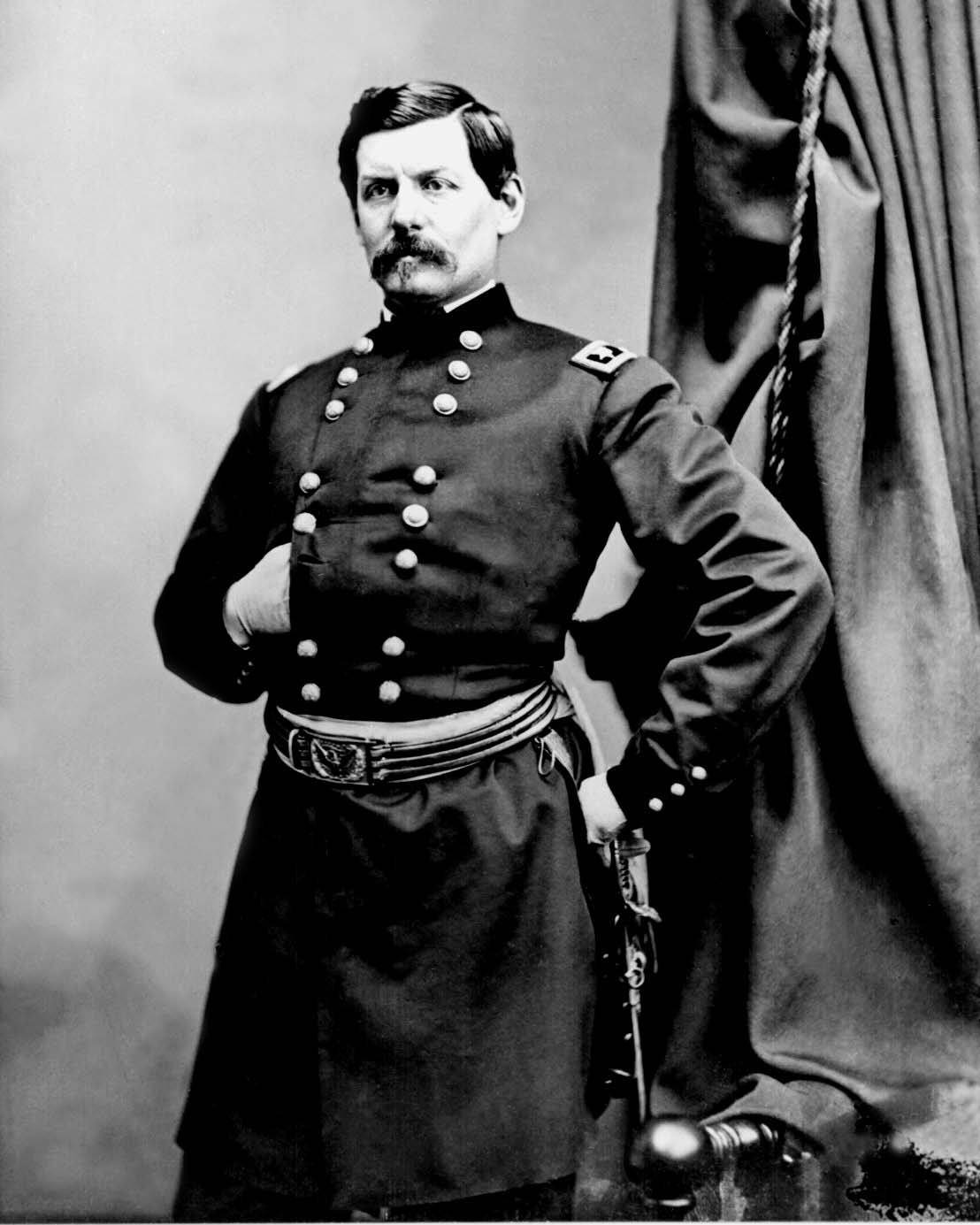 Confederate General Robert E. Lee planned to lead the Army of Northern Virginia into Pennsylvania, their first invasion of the North. The Battle of Antietam forced him into retreat. Wikimedia Commons. 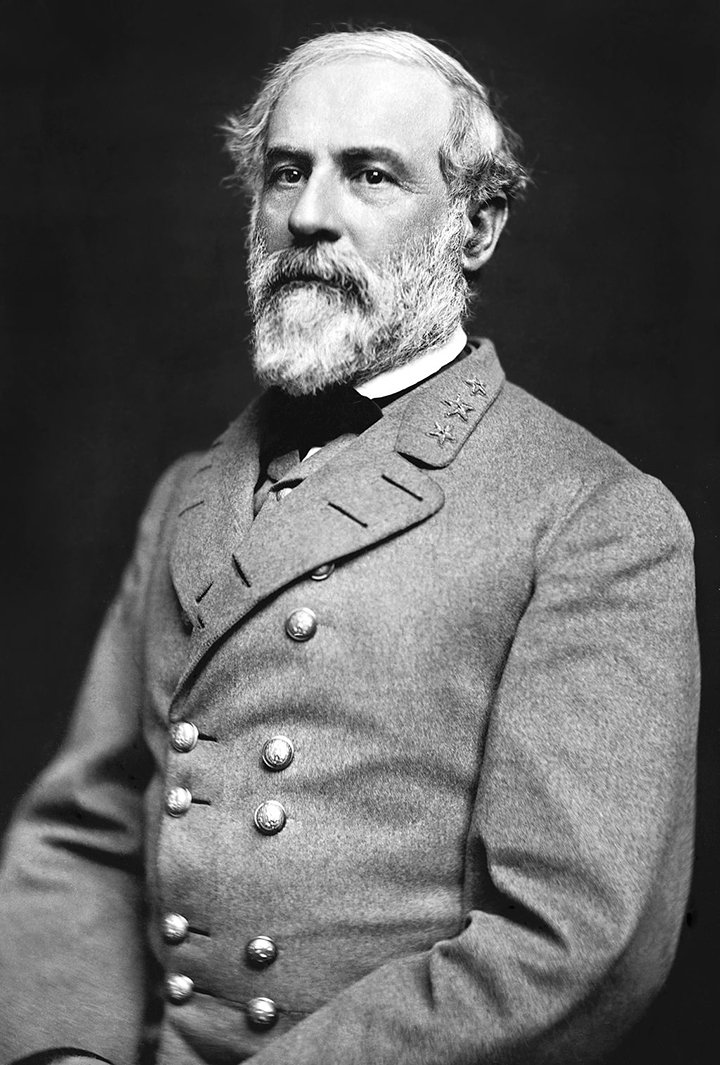 Photography was not advanced enough to capture the action of battle, so photographers like Andrew Gardner documented the aftermath. Library of Congress. 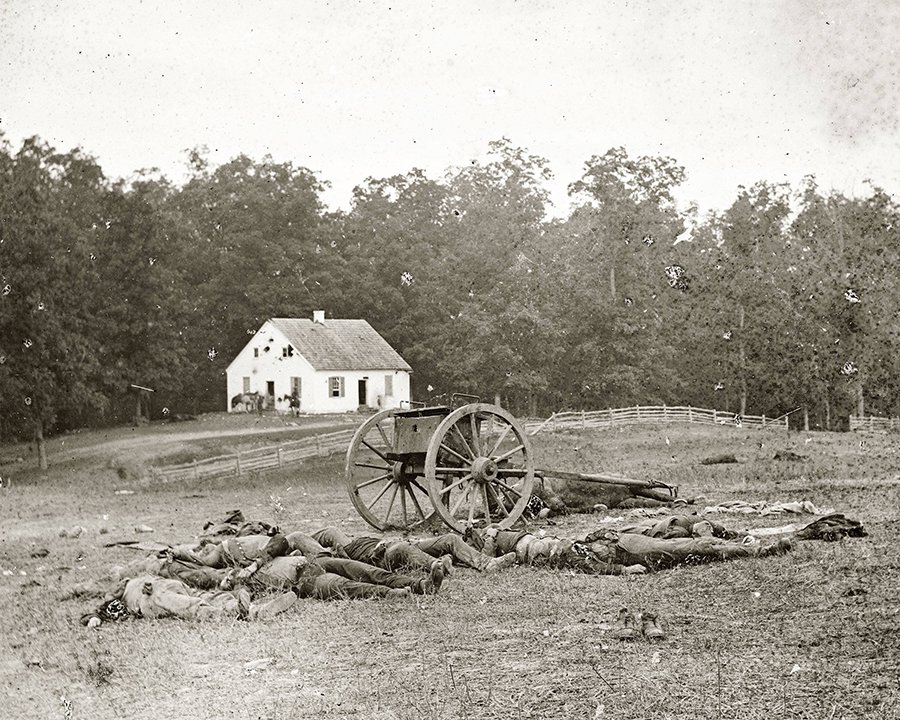 President Lincoln visited General McClellan at his camp headquarters on October 4, 1862. A close look at this photograph shows both the American flag and captured Confederate battle flag on the left. 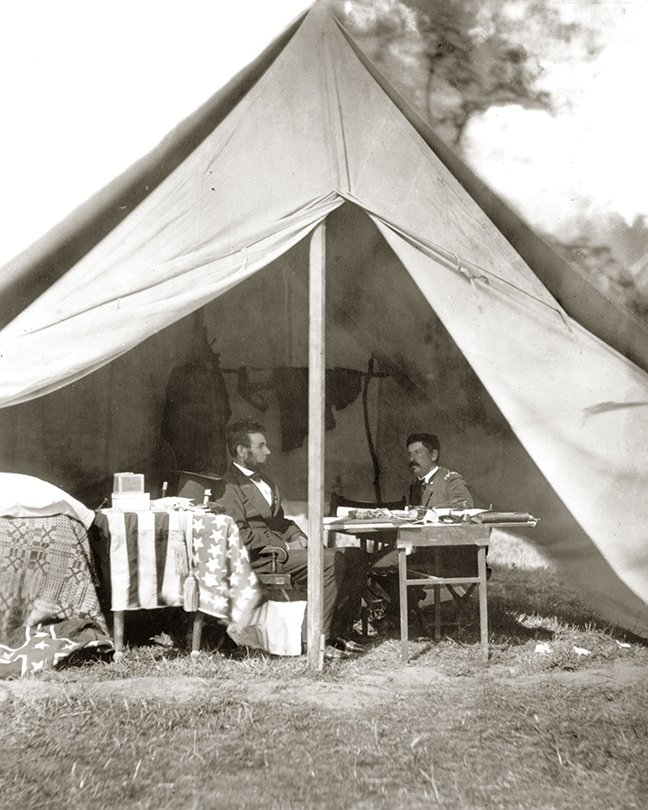 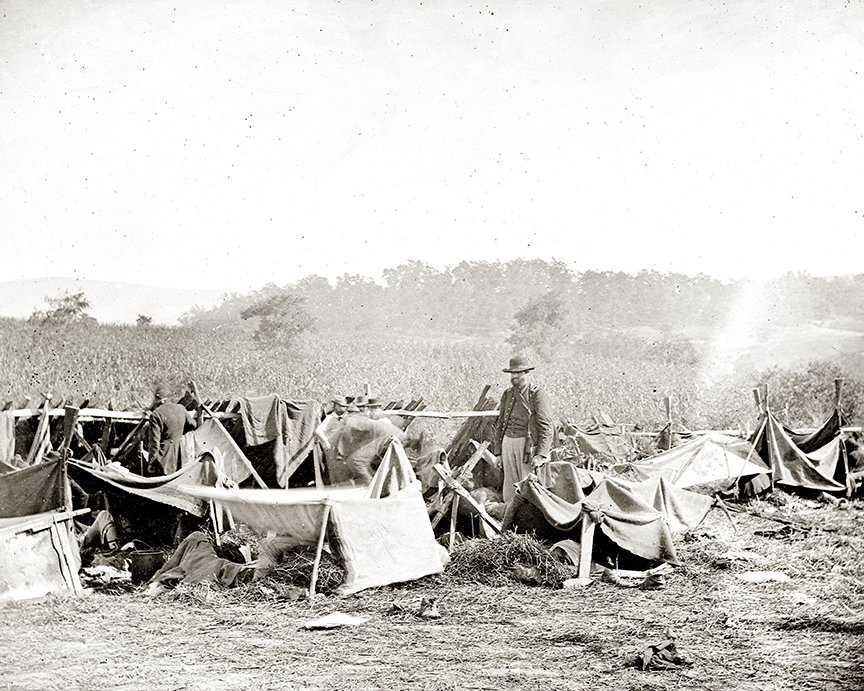 The Sunken Road, or "Bloody Lane," offered a natural trench for defensive Confederate forces. 3,000 Union and 2,600 Confederate were killed or injured at this site. This image looks east from the north bank. Library of Congress. 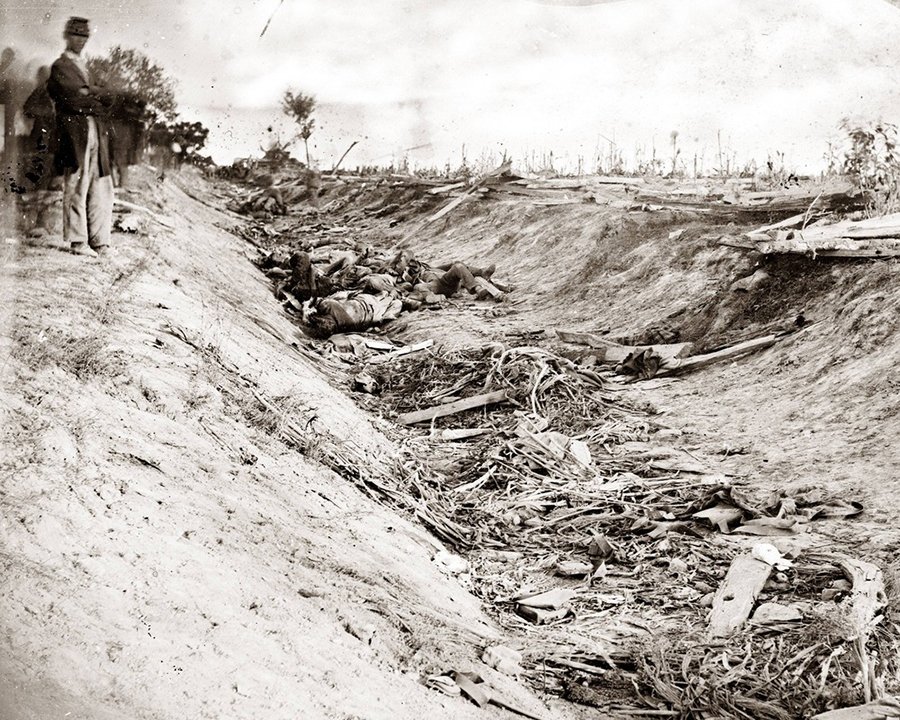 The heavily damaged Lutheran Church, built in 1768, on the east side of Sharpsburg. It was damaged by Union artillery and demolished after the battle. Library of Congress. 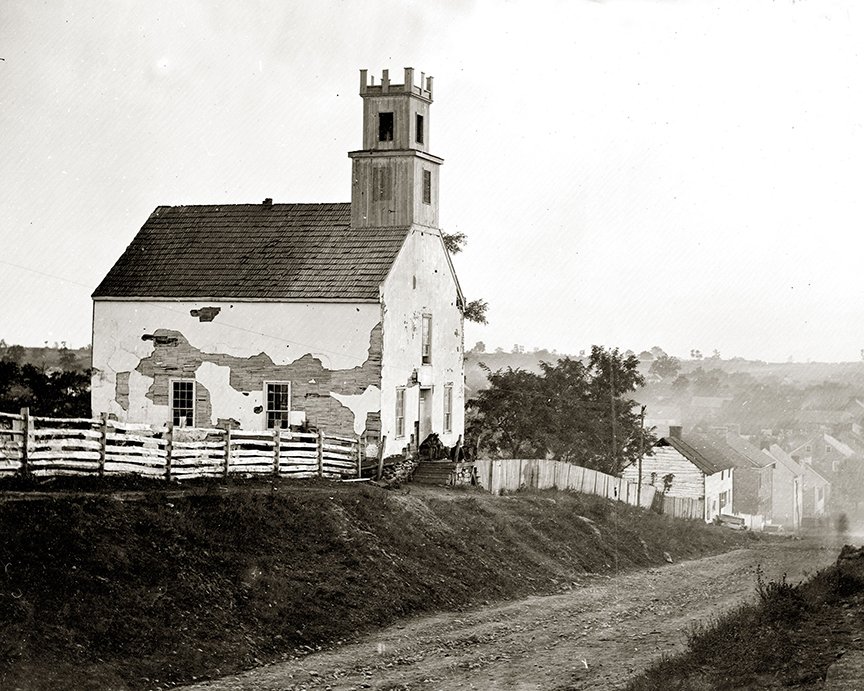 A view of Burnside Bridge taken from the same perspective of Union Major General Ambrose Burnside, who managed to seize the bridge after a long and cumbersome conflict. Library of Congress. 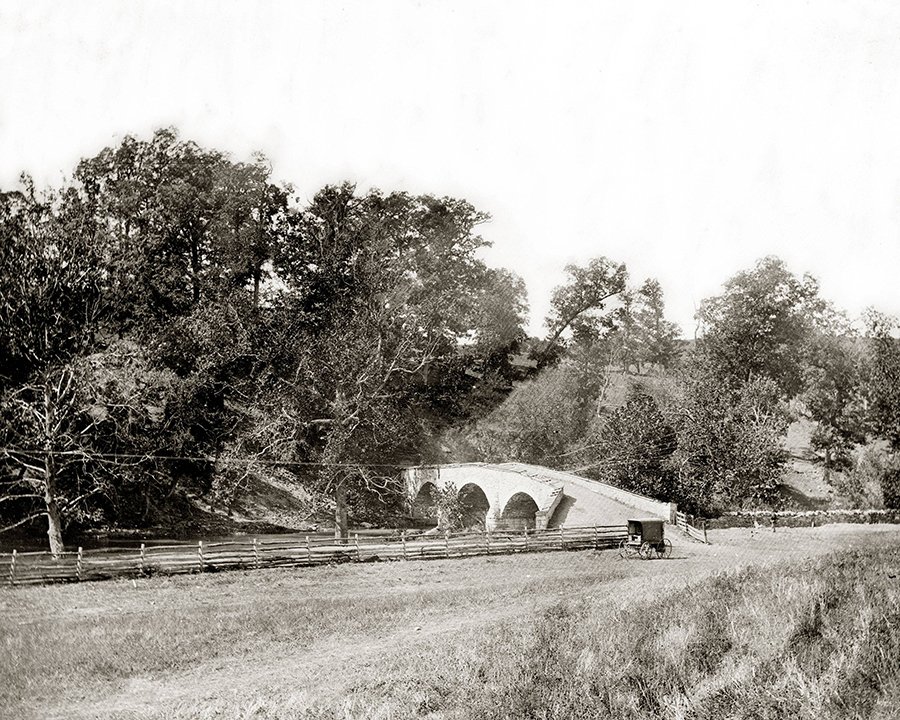 On the evening of September 16th, 1862, Union General George McClellan ordered Major General Joseph Hooker to cross the creek where Confederate troops were located. For reasons that are not entirely clear, Hooker's army did not engage the Confederates immediately. In the early hours of September 17th, both Union and Confederate artillery began firing upon enemy position.

The first infantry engagement occurred near Dunker Church where Major General Hooker attacked a Texas Brigade. Hooker was in need of reinforcements to press his momentum and possibly push the Confederates back from their defensive position, but men under Confederate General John Hood prevented reinforcements from arriving. As the day continued, the situation grew worse for the Union. The battle moved to the sunken road aptly named “Bloody Lane” where Major General Daniel Hill’s 2,600 Confederates stopped the Union army from advancing further. Hill’s men held ground against a much larger Union force but could only delay the Union advance through the middle of the Confederate line. The carnage was so great as the Union advanced against the Confederate defenders that the low-lying road earned the moniker “Bloody Lane.”

General Ambrose Burnside and his division were ordered to launch an attack from the lower part of a Rohrbach Bridge against the Confederate artillery on the hillside. The Confederates had an advantage as they were able to defend their position and use trees as covers while the Union had to use a narrow road to cross a bridge that was under fire from Confederate artillery. The Union tried two times to cross the bridge and failed both times until they regroup for a third attack. The 51st Pennsylvania and the 51st New York, commanded by Col. John Hartranft, was ordered to take the bridge and the highland. According to legend, the men asked if they would be rewarded with extra whiskey if they successfully dislodged the Confederate defenders. After two hours of heavy fighting and high casualties, the Union crossed the bridge but lost over 500 men in the process. This allowed the Union to drive the Confederates from their position and gave the Union control of the highlands.

As the Federal forces began to the collapse the Confederate right flank, the timely arrival of General AP Hill’s Division helped drive the Union forces back, and allow Lee to escape back to Virginia. The battle cost both sides 22,720 casualties and 3,650 dead. Antietam was the bloodiest one-day battle of the war and there was no clear victor. However, Lee's army was too devastated to continue an offensive in Northern territory which allowed the Union to claim a technical victory as Union generals never lost command of the field.

Antietam was the first major victory of the Army of the Potomac over Lee's Army of Northern Virginia. The Union victory at Antietam helped solidify Lincoln’s position in Washington because the President was able to issue the Preliminary Emancipation Proclamation which announced that the Union would consider all slaves in rebel territory free after the end of the year. The Emancipation Proclamation went into effect in January 1863, and although it only applied to areas in rebellion rather than lands Lincoln's armies controlled, the proclamation demonstrated that the issue of slavery was at the center of the war and signalled that Lincoln would no longer be content to return to the status quo as a nation divided "half slave and half free"

The Emancipation Proclamation also reduced the likelihood of European help for the South given the sentiment of most European leaders against chattel slavery after Britain outlawed the practice in their colonies. The Union's ability to stop Lee's offensive coupled with the President's decision to move closer to abolitionist Frederick Douglass's vision of a war for emancipation came at a time when several European powers were considering support for the Confederacy in order to preserve advantageous trade relationships with Southern ports and merchants.

Reflecting the historiographical shift towards interpreting military and social history simultaneously, leading historians such as James McPherson began interpreting the battle as a pivotal moment in the war for several reasons. Few Americans could comprehend the sheer devastation of Antietam where 6500 soldiers were mortally wounded in a single day and nearly twenty thousand were seriously wounded. And while Antietam marked the bloodiest day in American history, it marked a transition from the maneuvering of generals like McClellan to the total warfare and sustained campaigns led by future Union leaders. According to McPherson and many other historians, Antietam also marked a moral and political transition given Lincoln's decision to issue the Emancipation Proclamation in its wake.

Military historians are quick to balance this interpretation with the limits of what the Union achieved at Antietam. McPherson agrees with the general consensus of military historians who believe that had McClellan pressed his attack on Lee, he might have crushed the Confederate Army of Northern Virginia as Lee was forced to retreat and in a vulnerable position as his army needed to either cross the Potomac River to return to the South. However, McClellan decided to not attack the fleeing Confederate army, allowing Lee to cross the Potomac. Lincoln was furious about McClellan’s lack of aggressiveness and resolved to replace McClellan following the battle.