Princeton University Chapel opened in 1928 after four years of construction. The chapel replaced the Marquand Chapel that burnt down in 1920 after serving the University since 1881. The arrival of the new Chapel in 1920, and its renovation from 2000-2002 mark changes attitudes regarding religion at Princeton. The University (formerly the College of New Jersey) enjoyed strong ties to the Presbyterian faith from its founding in 1746 until the turn of the twentieth century including requiring students to attend chapel and take courses in Bible studies. By the time the Chapel opened in 1920, the University no longer involved religious studies as part of its pedagogy and when its renovations were complete in 1922, a ceremony included prayers from representatives of the Buddhist, Jewish, Islamic, and Christian faiths.

2003 photo of the Princeton University Chapel 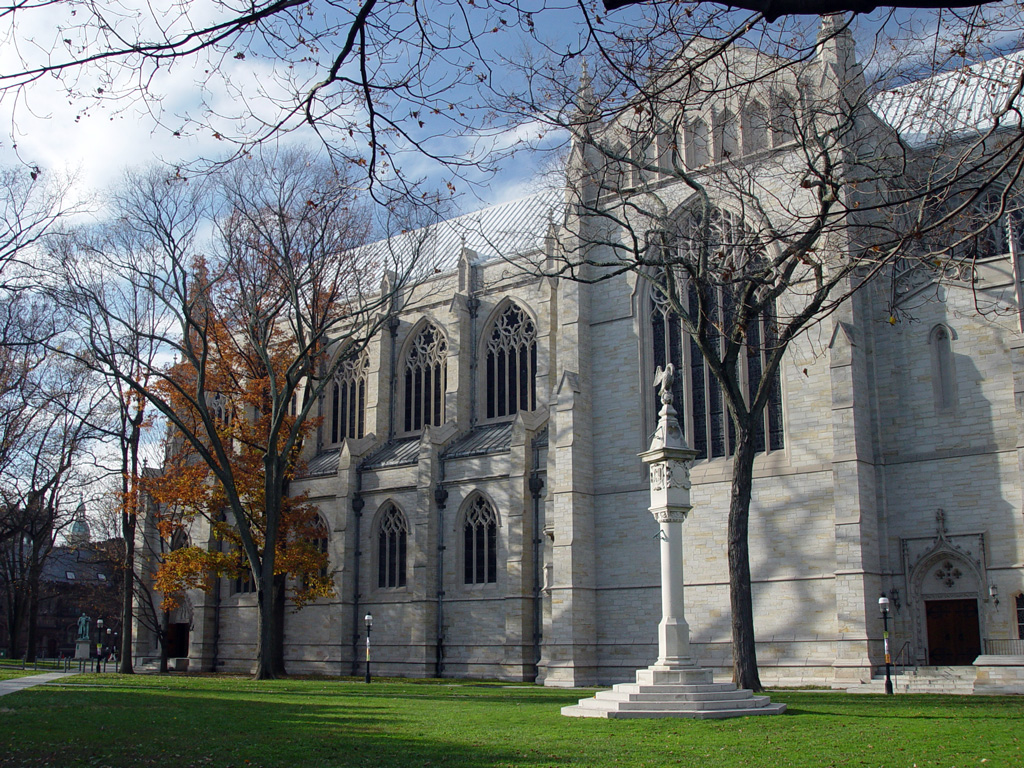 2011 photo of the entrance to the Princeton University Chapel 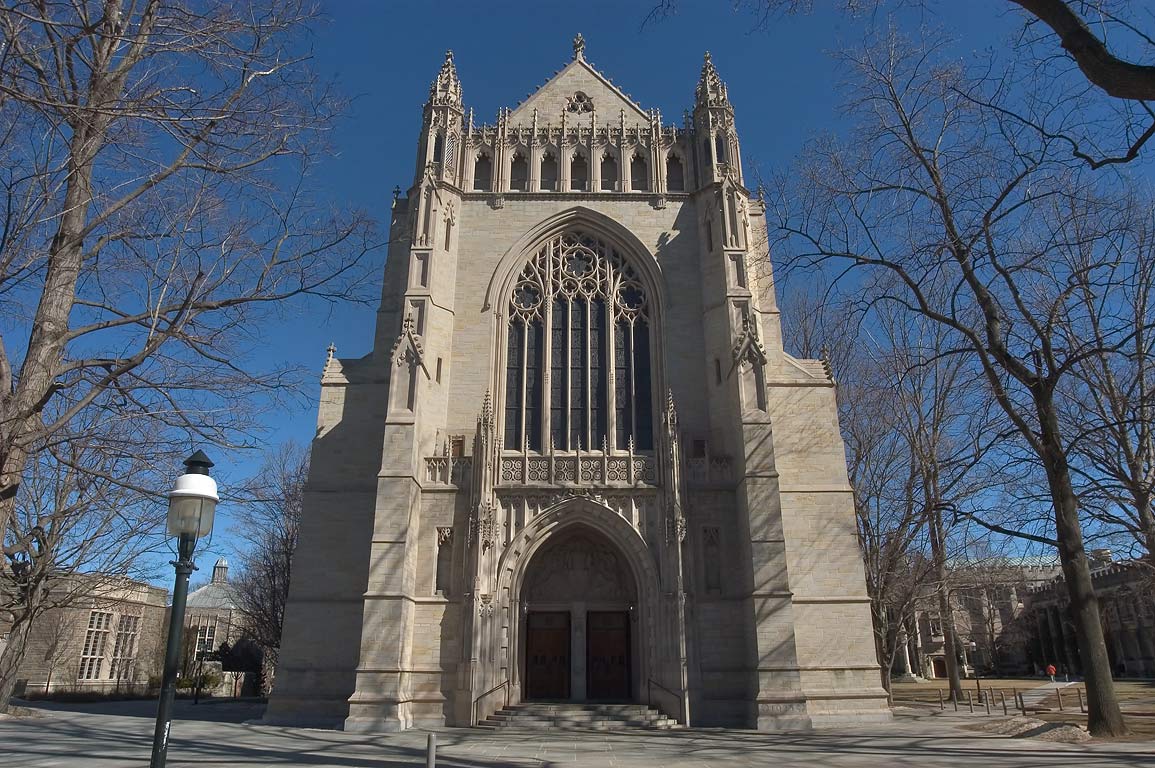 Rev. Dr. Martin Luther King Jr. at dinner on campus in 1960. He spoke at the Chapel. 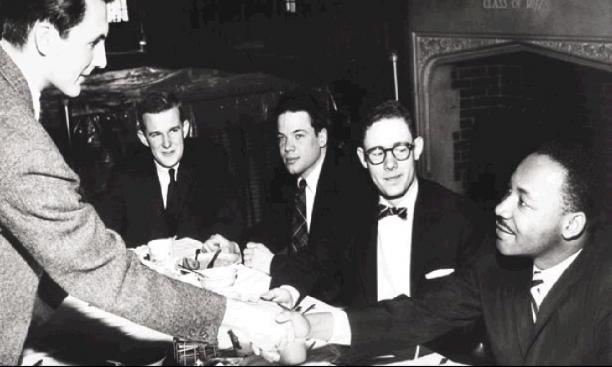 Construction took place between 1924 and 1928 on The Princeton University Chapel and replaced the Marquand Chapel after it had burned down in 1920. The University intended the Chapel to be the largest university chapel in the nation and cost $2.3 million to build. Time Magazine covered the dedication ceremony for the 2000-seat, nondenominational Chapel when it opened in 1928. Years later, in 1960, Martin Luther King, Jr. delivered a sermon at the facility. Today it is a center for celebrating diverse faiths, from Buddhism to Christianity, which speaks to University's transition from its first century as a Christian-focused college.

Presbyterians first arrived in New Jersey during the 1660s, adding to a population that already included significant numbers of Quakers, Dutch Reformed, and Congregationalists. The founding of Princeton (then known as the College of New Jersey) in 1746 and included a provision required by the New Jersey governor that pledged religious freedom for the students. Nevertheless, the College first met in Presbyterian Churches for its first ten years, including Aaron Burr's Presbyterian parsonage in Newark for a few years when he served as college president. Indeed, the students, faculty, and trustees remained overwhelmingly Presbyterian throughout the eighteenth and nineteenth centuries.

The College (along with Aaron Burr) moved to Princeton in 1756. The first permanent Chapel arose after the Civil War and primarily catered to protestants, namely Presbyterians. And, a requirement existed that students attend Chapel, much to the dismay of many students. As a result, many students engaged in "practical jokes" that included tarring the seats, burying them in hay, and leaving a cow in the pulpit. Regardless, the Presbyterian influence remained strong for many years to come; the path to graduation included four years of mandatory Bible classes. And, as the University grew, the need for larger Chapel emerged. Henry Gurdon, a founder of the Metropolitan Museum of Art, served as the Marquand Chapel's principal donor, which opened in 1881 and served the student body until it burnt down in 1920.

The Marquand Chapel fire coincided with the demise of Evangelical Protestant values at the modern Princeton. The College of New Jersey officially became Princeton University in 1896. From 1900 to 1920, the University eliminated mandatory Bible classes, theology studies, and the required study of ethics and apologetics. As well, the University reduced the compulsory chapel attendance to Sundays only. Thus, by the time plans for the new Chapel arose, Evangelical Protestantism had no longer served as the focus of education at Princeton.

Not long after the new Chapel opened, the nation faced the Depression and World War II. In the aftermath of those events, there existed an exponential growth in students attending higher education, including at Princeton. Student demographics during the 1950s at elite schools remained all-male, almost exclusively white, and usually Protestant. But, social change dominated the 1960s, and campuses served as the epicenter for protests against the Vietnam War and pushed to end racial and gender discrimination. Indeed, On March 13, 1960, the famed civil rights leader, Martin Luther King, Jr., delivered a sermon at the Chapel where he called for universal brotherhood. (A plaque on the interior south wall of the Chapel's nave commemorates the occasion.)

Thus, by the 1980s, universities like Princeton saw increasingly diverse student bodies, including those who practiced many faiths. And, attitudes grew increasingly more liberal and accepting of all faiths, demonstrated by the relationships between the Chapel and the University. The arrival of the twenty-first century included a two-year, $10 million restoration project for The Princeton Chapel (a project that resulted in winning the New Jersey Historic Preservation Award for 2002, and the 2004 Stone World Magazine Tucker Award for Renovation and Restoration because of the stonework involved). Although the design and decor clearly allude to a faith focused on Christian beliefs, the post-renovation, interfaith re-dedication ceremony included prayers provided by those of the Buddhist, Christian, Islamic, and Jewish faiths.

"History: One of the great religious edifices in the United States." Princeton University Chapel. princeton.edu. Accessed May 4, 2020. https://chapel.princeton.edu/chapel/history.