Christ Church, established in 1742, has a rich history, from its Colonial beginnings through the Revolutionary War, to twentieth-century desegregation and community building. Architecturally, the complex of buildings that make up the Church reflect these eras of its history, with a Colonial vernacular Georgian steeple tower (which burned down once in 1803 and again in 1927), Gothic Revival church building with Neoclassical elements, and Italianate sexton house. Other buildings on the complex include the choir house (built in 1874) and the parish house (built in 1897). 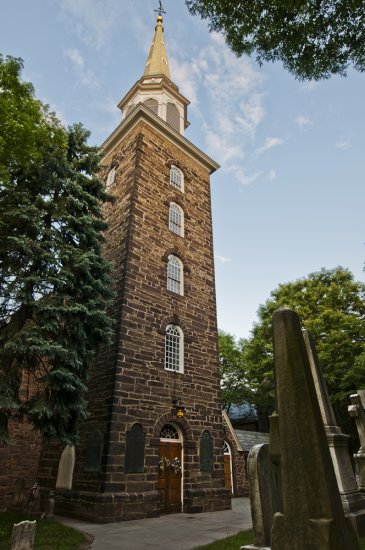 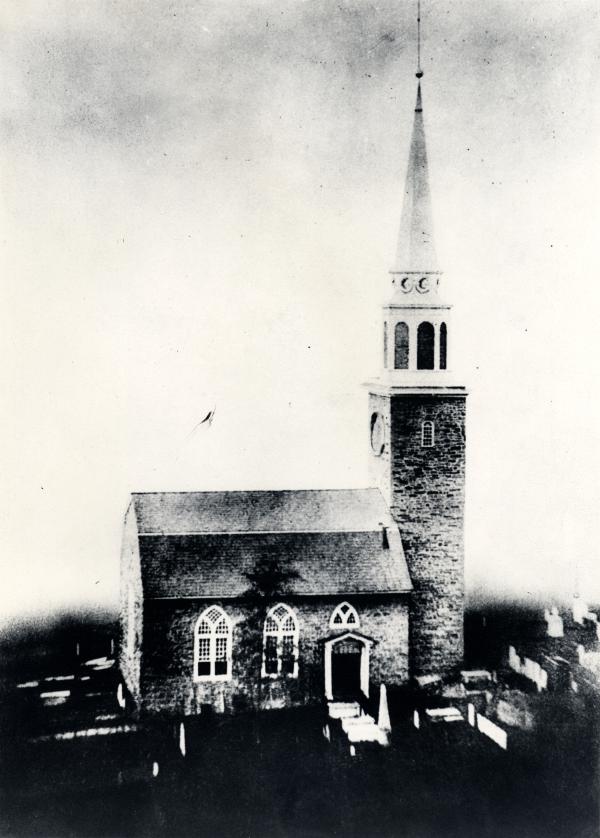 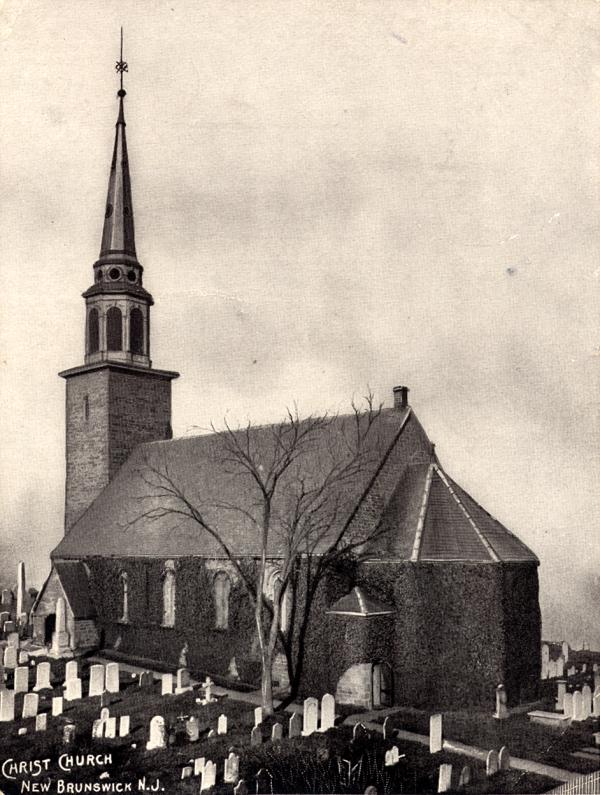 From the 1938 Historic American Buildings Survey (image from Wikimedia) 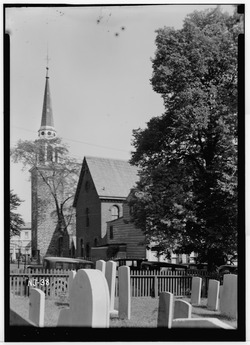 From 1711 until 1742, Picastaway was home to the only Anglican church in New Jersey. As settlements and the membership of the Anglican denomination grew, so did the need for a mission parish in New Brunswick. Construction of Christ Church began in 1742 on land leased for 2000 years from Philip French for the price of one peppercorn per year. The longitudinal (rather than meeting house) floor plan was considered a progressive layout, the first of its kind in New Brunswick, built by local craftsmen in a vernacular Georgian style. The Society for the Propagation of the Gospel in Foreign Parts (SPG) was responsible for organizing Christ Church Parish, and like all American Episcopal churches, its rector was a missionary appointed by the Church in England. One of the first rectors in the post (from 1754-1757) was Reverend Samuel Seabury Jr., an American-born preacher and physician who had studied and been ordained in England. Later, he would become the First Bishop in America.

Not long after Christ Church royal charter as an independent parish in 1761, Abraham Beach became rector, serving from 1767-1784. During his tenure, the church tower was built (1773) in a simplified imitation of St. Martin-in-the-Fields of London. On July 8, 1776, at the foot of the Christ Church tower, the Declaration of Independence was publicly read for the third time. Reverend Beach found himself and his congregation caught up in conflicting loyalties, with some parishioners fighting for the Patriots and others for the Loyalists. Beach supported independence, but did not condone violent rebellion, and was sworn to support and pray for the Crown as part of his religious ordination. When he received death threats for offering prayers for King George, he opted to close the church until the conclusion of the Revolution, conducting services in the homes of moderates, where he often omitted prayers for the King. After the Revolution, Beach became a leader in the effort to create an Episcopal Church in America, independent of the Church of England. Christ Church served as the meeting place for the first organized discussion toward that end in the spring of 1784, and by the following year the American Episcopal structure was established.

John Croes, who became New Jersey's first Bishop in 1815, served as rector for Christ Church from 1801-1832. Croes had fought as a sergeant major in Washington's army during the Revolution, and helped Christ Church achieve financial stability in the upheaval that followed. In fact, when lightning struck the church tower and burned it to the ground in 1803, the parish was able to rebuild it that same year, remodeled the entire building the following decade, and by the middle of the nineteenth century even tore down the original structure (except for the tower) and re-used the stones for a new, enlarged building. The new Christ Church structure was designed by the New York firm of Wills and Dudley, and was the first Gothic Revival style building in New Brunswick.

Throughout the latter half of the nineteenth and the early twentieth centuries, Christ Church's rectors improved the musical program, choir, and Sunday School, as well as the church complex (including construction of the Parish House), and finances. Christ Church was added to the National Register of Historic Places in 1989, and its first woman rector was elected in 1993. Joan Fleming, (ironically) an Englishwoman, had been Interim Rector for two years prior to her election, and used her tenure toward long-term preservation of the historic church; building up outreach ministries such as an English as a Second Language program; and making substantial efforts to welcome people of color, particularly New Brunswick's growing African and Caribbean population, to the church. The parish had included black members even in its first years, but these individuals were enslaved to white parishioners, including rectors Beach and Croes. Until the 1920s, black members were seated separately; at that time the organ was moved into the section reserved for African American members, and those displaced formed their own church, St. Alban's. Newcomers of color even during the 1970s were received coldly by some of Christ Church's parishioners, but former Peace Corps member Father Martin Gutwein worked toward a more welcoming environment. In the 1990s, Joan Fleming's confrontation of institutional racism in the parish involved an initiative called Unlearning Racism, as well as establishing a Christ Church Black Heritage Committee and programming celebrating diverse heritages through events such as Italian Night, International Night, and the Celebration of Black Heritage. Her efforts have resulted in a comfortably multicultural congregation, and today's Christ Church takes pride in its welcoming diversity.