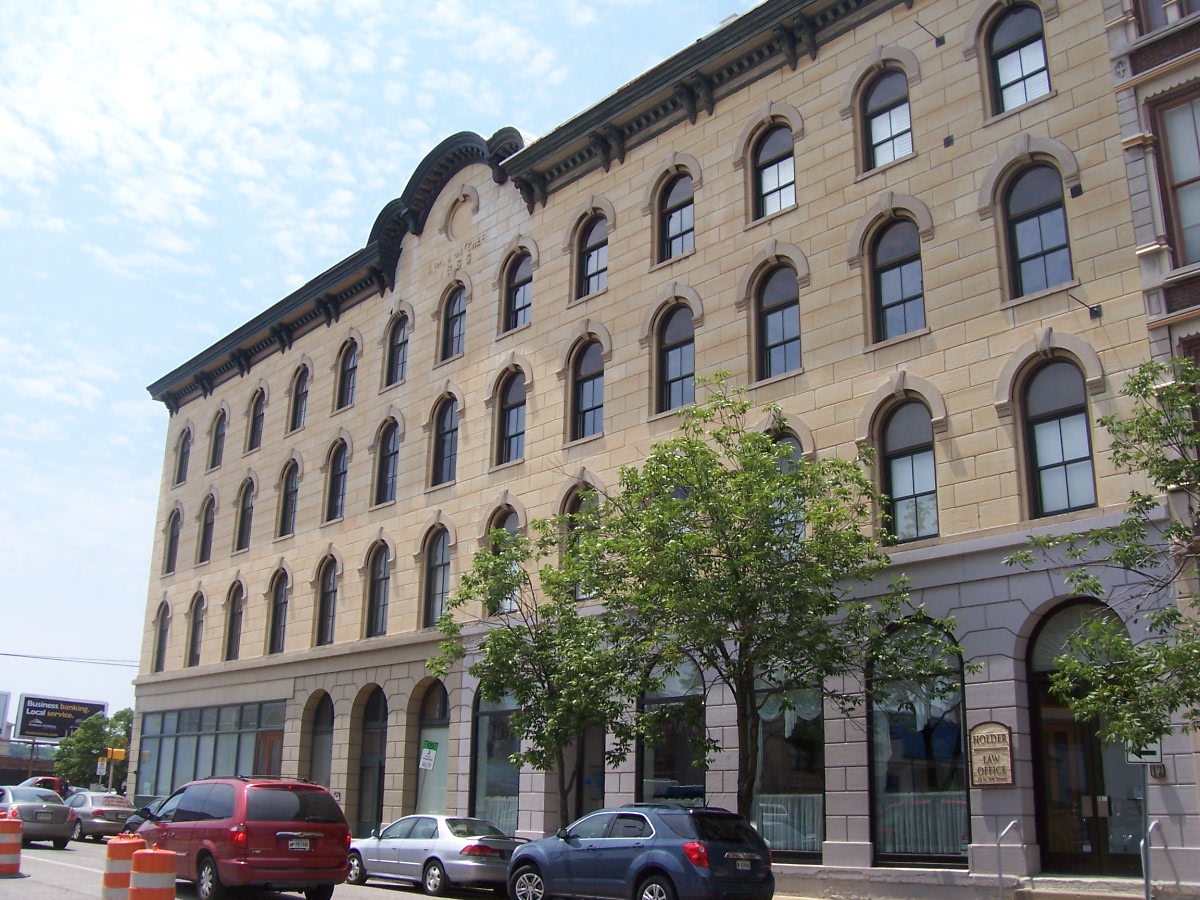 The structure from 2 to 12 N. Third Street was built in 1865 to house Earl and Hatcher Wholesale Grocers, owned by Adams Earl and William Hatcher. The Italianate style brick building is noted for its limestone facade, arched windows, and elegant bracketed cornice. The space was divided into four separate commercial spaces, one of which was still a wholesale grocers in the late nineteenth century. Others included shops selling shoes, dry goods, and furniture. In 1995, it was renovated into offices with some businesses above. The Earl and Hatcher Block is a contributing structure in the Lafayette Downtown Historic District, in the oldest part of town. When listed in the National Register in 1980, the district contained 86 buildings constructed before 1930.

The Spring, Emerson & Company Building has stood on North Third Street since 1878, just north of the Earl and Hatchers block (also a Clio entry). The four-story brick building was faced in stone sometime in the twentieth century. The first business to occupy the structure was a stationers known as Spring and Lingle, a printing firm that was established in 1845. The printing and book binding company outgrew the space and moved elsewhere in downtown Lafayette after 1885 and by 1892; the building was left vacant. A bowling alley and billiards hall occupied the Spring, Emerson & Company Building in 1899.

The Wells Yeager Best Building is an Italianate style structure constructed in 1872. the three-story brick building features a parapet entablature. The first-floor storefront has been modified. It is associated with Indiana's first registered pharmacist, Charles Avery. He operated a pharmacy next door to this spot from the 1840s up to the completion of this new building. It housed the state's oldest continuously operating drugstore for decades.The building has been modified and contains a real estate office on the first floor and apartments above. The building contributes to the Lafayette Downtown Historic District, in the historic core of the town. The district was listed in the National Register in 1980 and contains dozens of historical structures between 2nd and 6th Streets, and Ferry and South Streets.

This railroad depot building dates to 1902 and used to stand two blocks away, at the southwest corner of South 2nd and South streets. It was built for the two New York Central rail lines that passed through Lafayette: the "Big Four" (Cleveland, Cincinnati, Chicago, and St. Louis) and Lake Erie & Western. The building was given to the City of Lafayette in 1983 and was moved here in 1994 as part of a railroad relocation project. The depot underwent restoration in 1994 and 1995 and is now used by AMTRAK, local CityBus and Greyhound buses, and Wabash River Enhancement Corporation (WREC). The Big Four Railroad Depot was listed in the National Register in 2003.

Amazingly, the company that had the red brick building at 310 Ferry Street constructed in 1869 STILL owns the structure. The Italianate style structure contains the Underwood Insurance agency. Thomas I. Underwood founded his insurance agency in 1865 in Lafayette. Thomas' son, Charles, joined the agency in the 1870s. After Thomas and his wife moved to Chicago, Charles ran the insurance agency alone. The third generation of the family, Richard C. Underwood, joined his father in the agency around 1900. When Charles died in 1913, his son-in-law, Walter Graham, became a partner in the firm. Over 150 years, the firm has had only eight owners. 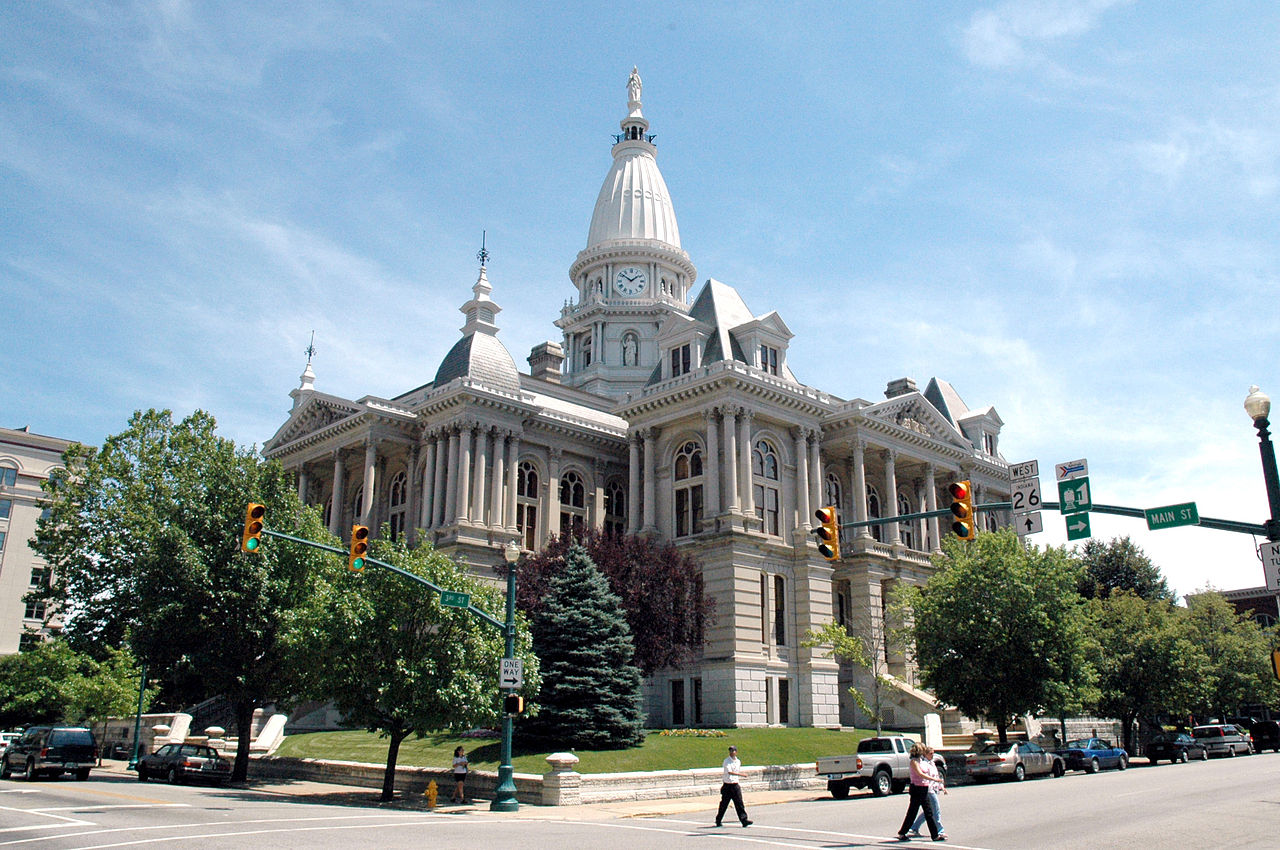 Constructed in 1884, the Tippecanoe County Courthouse stands prominently on a public square in downtown Lafayette. It reaches a total height of 226 feet and features a 14-foot statue at the top called "Lady Liberty." It is the third courthouse to serve as the county seat. The building's appearance is an eclectic mix of architectural styles: Beaux Arts, Baroque, Gothic, Georgian, Victorian, Neo-Classical, and Second Empire. As such, it is significant not only for its political history but its architecture as well. It remains the tallest building in Lafayette and was added to the National Register of Historic Places in 1972.

Standing at this spot since 1837, the Brown-Feuer Building at 426-430 Main Street is one of the oldest buildings in downtown Lafayette. Also known as the O.L. Clark Building, the structure contains two commercial spaces that housed a fruit seller in the west half and a saloon in the east half in the 1880s to 1890s. The fruit shop became a restaurant by 1899, connected through two new doorways to the saloon. The brick and wood building is a basic functional structure of no particular style. The Brown-Feuer Building currently contains a bookshop on the ground floor, Main Street Books, offering new and used books.

The Heath Block was constructed in the late 1860s in the French Second Empire style. The building contained a bank operated by John Heath, a wealthy local man. The building has housed a candy store/ ice cream parlor since 1912, when Lee Glatz opened Glatz's Candy. Ivey McCord came to the company as a candymaker in 1917 and bought the store in 1947. McCord Candies still occupies the building, with a restaurant, candy store, and soda fountain on the first floor. Candies are still being handmade on the building's third floor in the traditional way; their candy canes and shipped all over the world. The McCords owned the structure until the 1980s.

Start at the new location of the 1902 train depot near the west end of downtown and walk through the oldest part of town. You'll pass by dozens of 19th century buildings, including the county courthouse, standing and still in use.