Completed in 1885, the A.J. Angell House a two-and-one-half story brick mansion with a basement constructed in the Queen Anne style. A wing attached to the west facade served as a servants' quarters and kitchen. The owner, a native New Yorker with a successful lumber business in Leavenworth, died soon after the house was finished. Widow Mary J. Angell and her three daughters continued to live in the mansion with her new husband Amos Fenn and a stepsister. Amos and Mary J. both died in 1913. Angell descendants owned and occupied the house until 1975. The Angell House and its carriage house was added to the National Register of Historic Places in 1977 as a fine example of Victorian architecture. 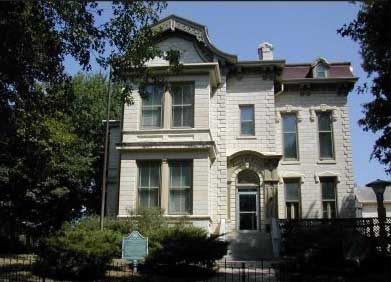 In an era when travelers had few dining options beyond railroad depots that offered notoriously bad and overpriced fare, Fred Harvey created a restaurant that served travelers quickly and efficiently. Harvey's methods were soon repeated at depots along the Atchison, Topeka, &amp; Santa Fe Railroad--effectively creating the first restaurant chain in America. The Harvey House restaurants helped to convince travelers to choose the ATSF rail line above others, and also provided viable employment for many cooks and servers, known affectionately at that time as "Harvey Girls." This stately rim rock building was constructed in 1869 and was purchased by Fred Harvey in 1883. The home stayed in the family until 1944 when Harvey's heirs donated the property to Cushing Hospital for use as a dormitory for its nursing school. City leaders and preservationists are working to restore the residence and build museum exhibits. Local volunteers are available to offer private tours of the building and share their progress as well as their vision for the museum's future.

The building at 601 S 5th Street was constructed as a public library in 1901 to 1902 as a Carnegie Library. The two-and-a-half-story, Beaux Arts structure has a projecting central entrance bay with a two-story portico above a double-door entry. Fanciness abounds above the paired Ionic columns, with relief sculpture ornamentation, a molded cornice, and a terra cotta ornament at the pediment peak. The public library has moved to 417 Spruce Street and the S 5th Street building was renovated and converted into eleven apartments. The building now houses studio, one-bedroom, and two-bedroom apartments and was renamed Carnegie 601. The ribbon-cutting was held in March of 2017.

The AXA Building is a commercial structure on the corner of Delaware and S 5th streets that was built in 1905 and designed by William P. Feth. The building's original owner was Charles Espenscheid, a miller from St. Louis. The ornamental building is two-and-a-half stories tall of red brick with contrasting tan brick trim. The main facade faces west onto S 5th Street and the building is divided into two identical wings connected by an arched entryway. The AXA Building was listed individually on the National Register of Historic Place in 1972 and is a contributing building in the Leavenworth Downtown Historic District which was added to the National Register in 2002.

Leavenworth's Hollywood Theater exemplified the Art Deco style with its vertical square columns and geometric designs on the front facade, above the marquee. The two-and-a-half story concrete building was constructed in 1937 and 1938 on the corner of Delaware and S 5th streets. Hollywood Theater was listed in the Register of Kansas Historic Places in 1984 and the National Register of Historic Places in 1990. The City of Leavenworth owns the building, which currently shows movies and hosts a local theatrical group's live performances in the building now known as the Leavenworth Performing Arts Center.

The original portion of the Merritt H. Insley House was constructed in 1860 and is now the two-story rear wing of the house. The house originally was ell shaped and faced east. From 1865 to 1866, a two-story, brick Italianate cube was added to the south of the ell; the house then faced south. One more building episode took place in 1883, when a one-and-a-half story, five-sided bay was added to the west of the cube, containing a staircase. The Insley House was listed in the Kansas and National Registers in 1986. The house is significant because of its owner, Merritt Hitt Insley (1830-1909), and for its architectural style. Insley was a local entrepreneur and financier and was active in Leavenworth's business community from the 1850s to 1890s.

Beginning at the Leavenworth County Historical Society, walk north past historic homes, a library-turned-apartment building, and a downtown commercial building and theater.