Home of the New Rochelle Pioneer newspaper from 1898 to 1920, the Pioneer Building is an architectural reminder of the Italianate style popular in late 19th century commercial buildings. The building faced demolition in the 1970s but, it received an adapted re-use and remains a part of New Rochelle’s downtown landscape. It was added to the National Register of Historic Places on December 29, 1983. 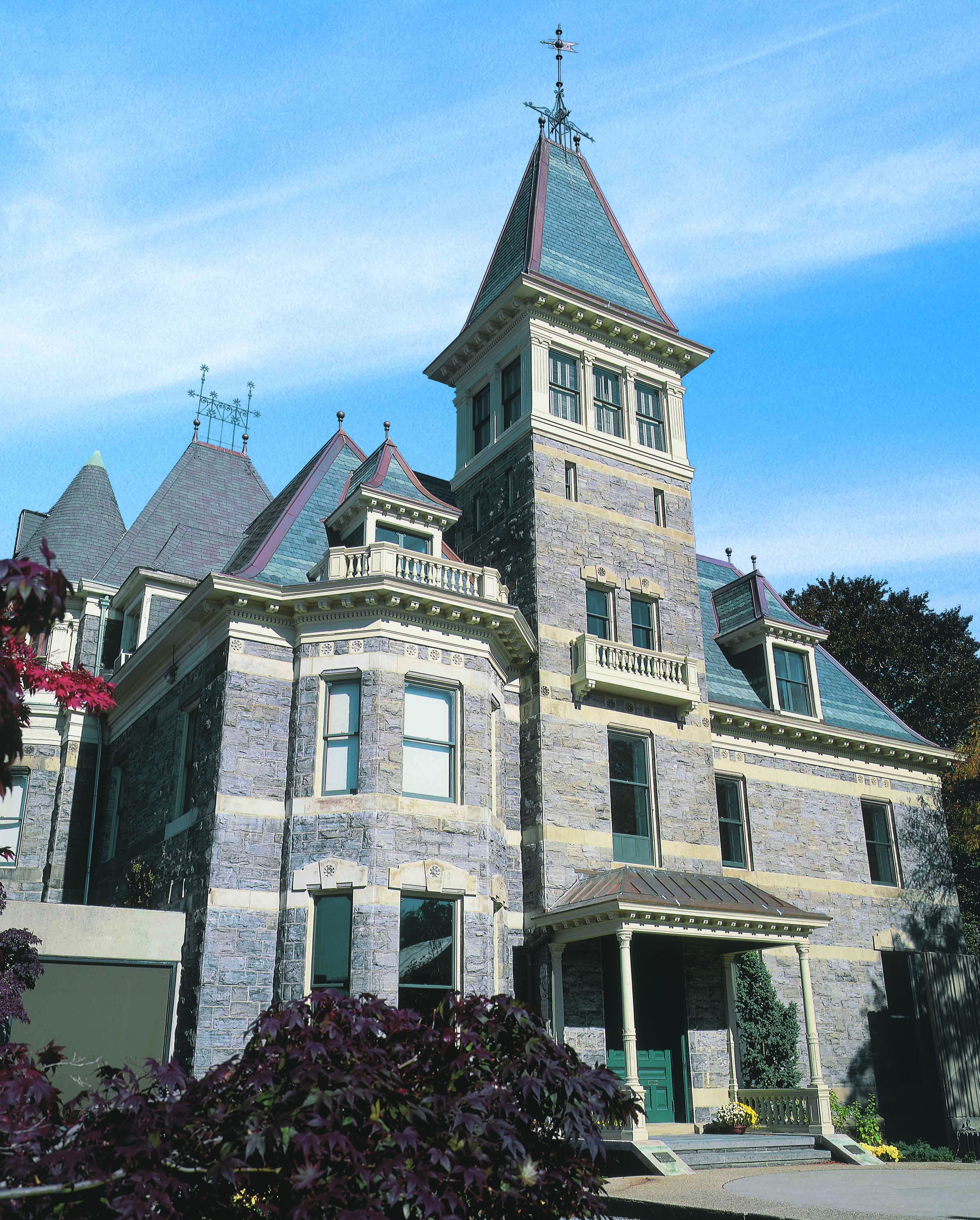 Glenview (also known as the John B. Trevor House) was built by John Bond Trevor in 1876. New York City architect, Charles W. Clinton designed the home in the style of High Victorian Gothic which is similar to the French Second Empire style. Construction on the home was completed in 1877 and the home remained in the possession of the family until Mrs. Trevor's death in 1922. The city of Yonkers purchased the home and transformed it into the Yonkers Museum of Science and Arts. In 1948, it was renamed the Hudson River Museum. By the late 1960s, a more modern museum was built in front of it, majority of the home's interior has been restored to the period of the Trevor's residency. 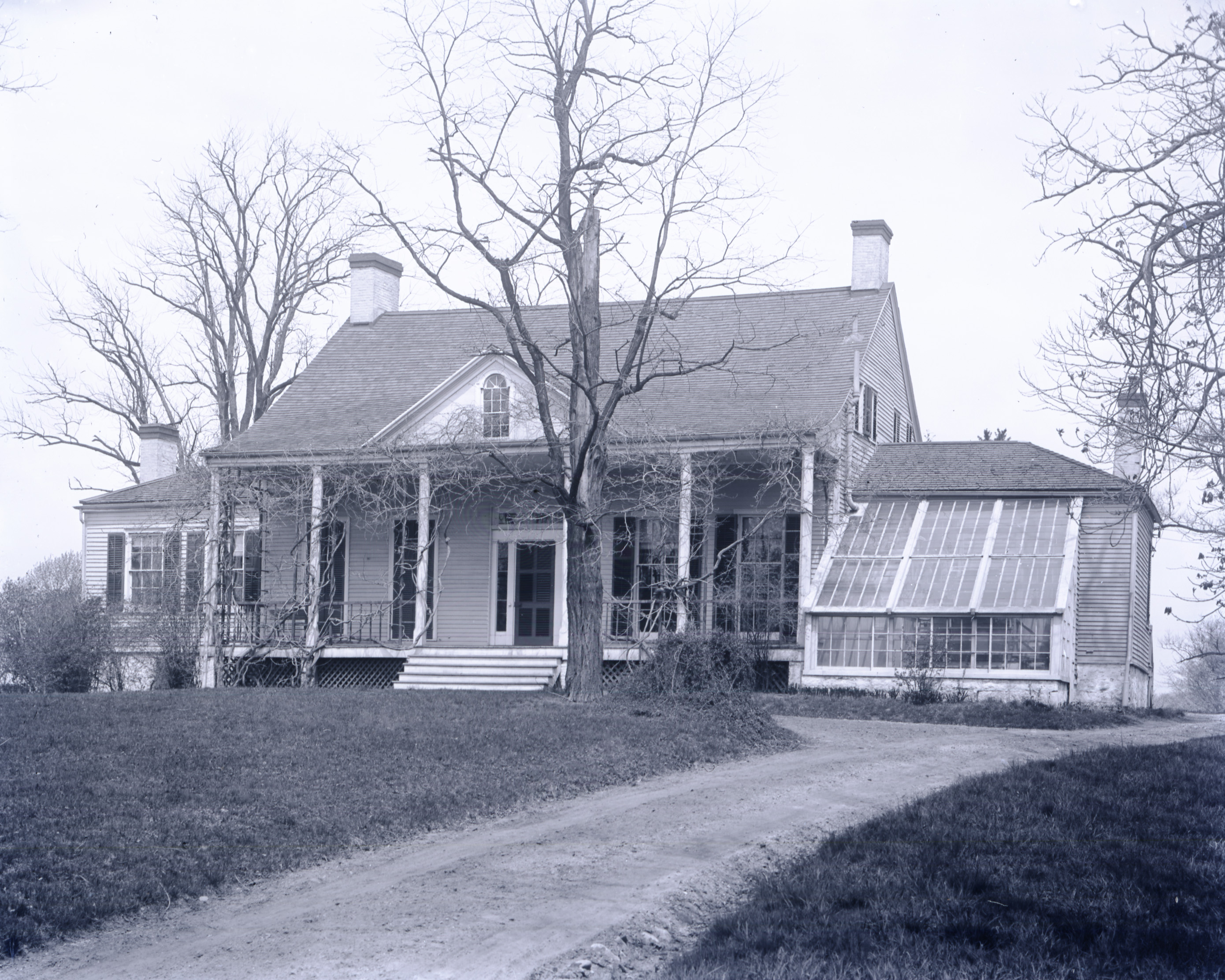 The Draper Cottage was the home of John William Draper, an acclaimed chemist and physician who became fascinated with the new field of photography and became the founder of the modern field of astrophotography by taking the first photographs of the moon. Draper built the estate and home, now owned by the Hastings Historical Society, in 1847, as a place to continue his scientific work and raise his family. His son, Henry, a talented scientist in his own right, would later build on his father’s scientific legacy on the estate and build an observatory on the property.

In 1847, John William Draper, a professor of chemistry and physiology at the University of New York City (now New York University), purchased a 20-acre property on ridge along the Albany Post Road, overlooking the small village of Hastings-on-Hudson. Apparently, there was already a house on the property, he either altered or replaced that home to create a Federal-style home. His son Henry shared his father's passion for science and after visiting the famous observatory of Earl of Rosse in Ireland decided to design his own. Along with his brother, Daniel, began work on constructing a reflecting telescope with a 15-1/2-inch concave mirror of silver-coated glass in 1858. In 1867, Henry along with his wife, Anna Palmer built a 28-inch reflecting telescope and two years later they built a larger observatory for this telescope, adjoining the first one. The Observatory Cottage and Observatory are preserved by the Hastings Historical Society and open to the public. 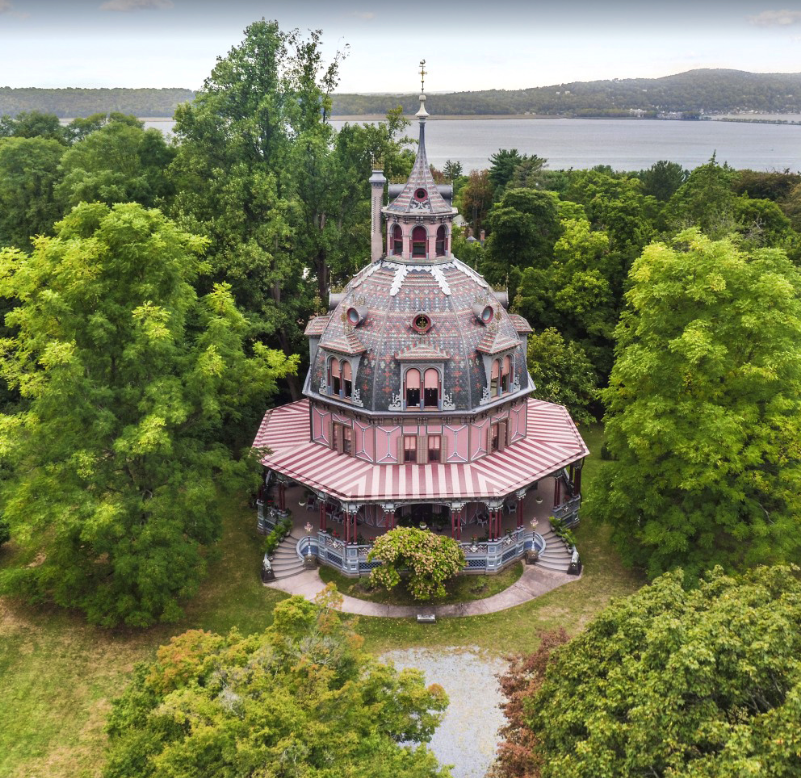 New York City financier and a devotee of phrenology, Paul J. Armour built the house in about 1860. He took his inspiration from the treatise of Orson Squire Fowler, titled The Octagon House, A Home for All, promoting the advantages of an octagon-shaped houses. Armour's Octagon house was fairly simple, containing only a basement and two stories, when prominent New York City tea merchant Joseph Stiner purchased it in 1872, he added a two-story dome and a soaring cupola. Today the house is privately owned and public tours are given. 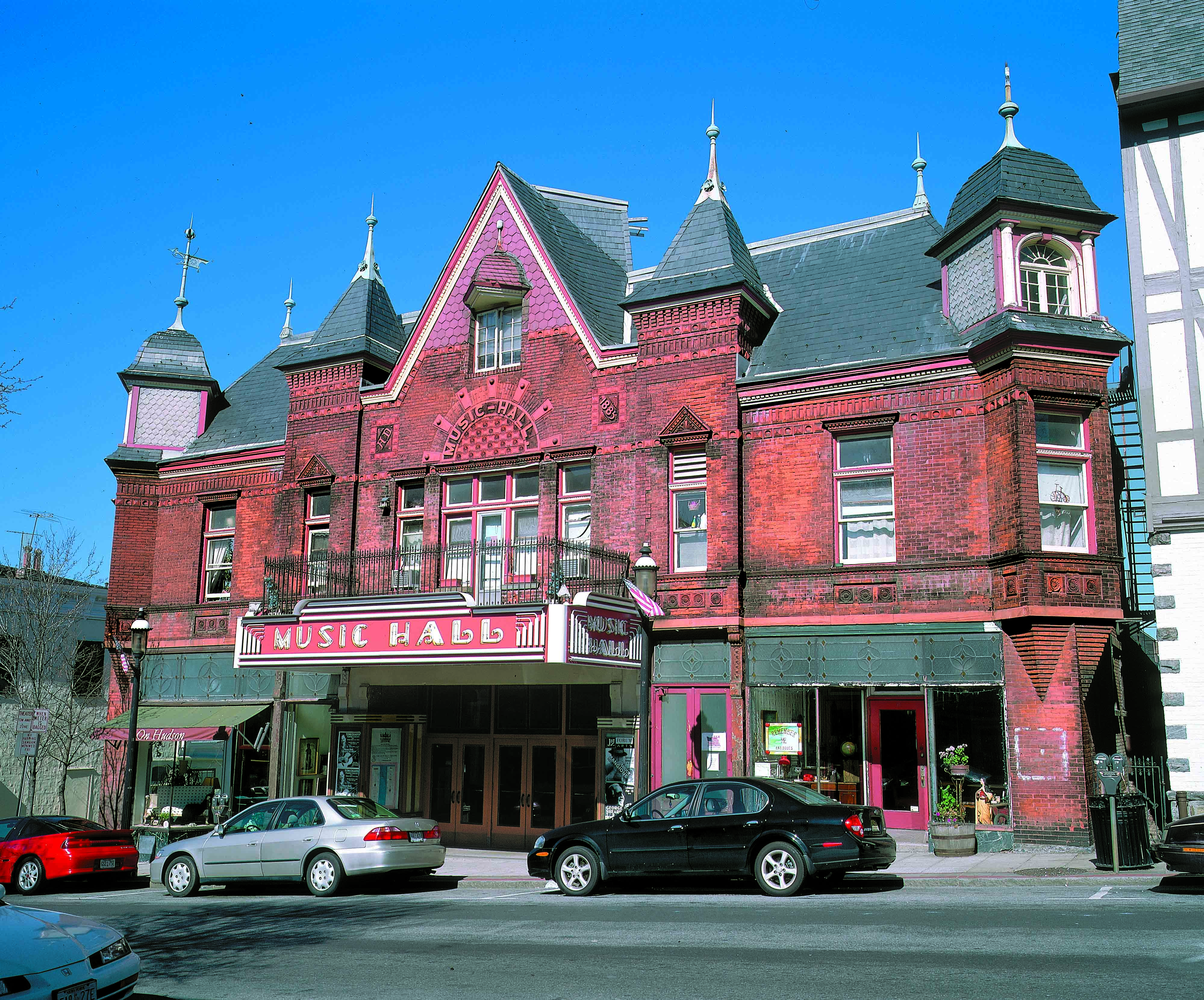 Tarrytown Music Hall first opened in 1901 as a multi-purpose entertainment center. As the town of Tarrytown slowly became more affluent in the 1880s, local chocolate manufacturer, William L. Wallace, commissioned architect Philip Edmunds with designing a multipurpose building that would contain stores, offices and apartments, as well as a large auditorium with a stage. The architectural style of its exterior is in the Queen Anne style. It continues to serve the community as an entertainment center today. 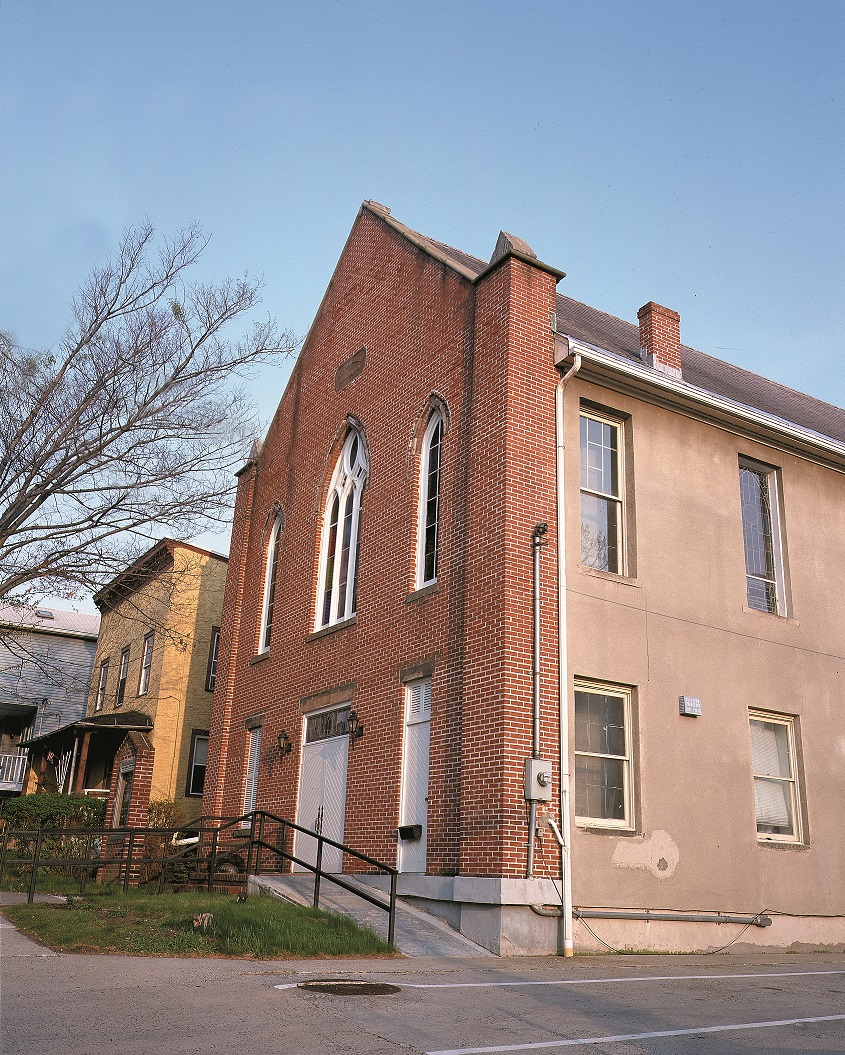 Built in 1865, Foster Memorial African Methodist Episcopal Zion Church has served the community for more than one hundred and fifteen years. Organized by Amanda and Henry Foster and built by free blacks, the church served an African American community that separated from John Street Methodist Episcopal Church in NYC after experiencing discrimination. Foster AME was known as a stop on the Underground Railroad. Escaped slaves attempting to reach Canada or deciding to settle locally were provided with food, shelter and assistance. 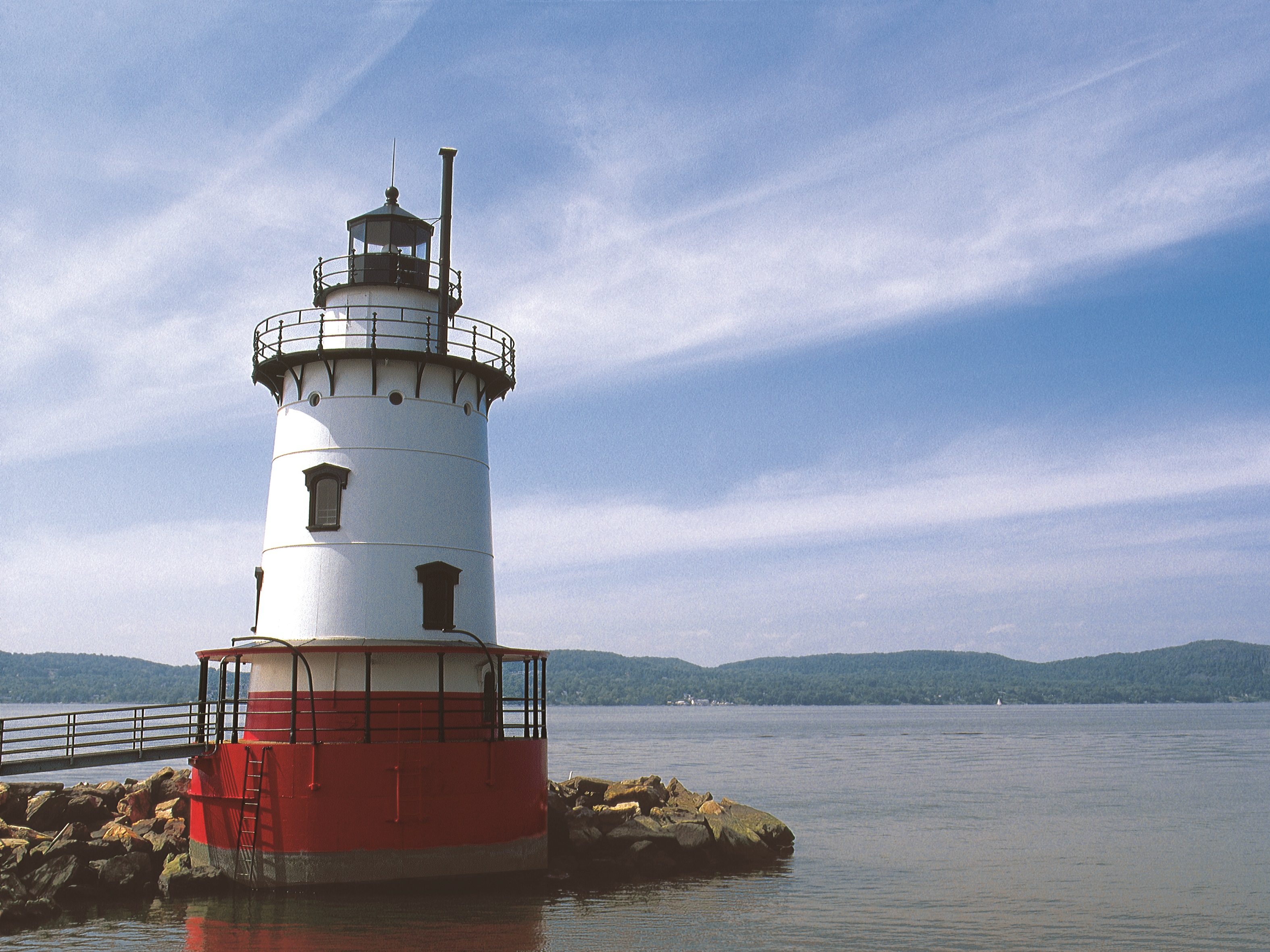 Also known as the “Sleepy Hollow Lighthouse” and the “Kingsland Point Lighthouse,” the Tarrytown Lighthouse is a sixty foot tall structure that served the important job of keeping boats and ships away from the rocky shores of the Hudson River, alerting sailors with its powerful lantern and bell. Built between 1882 and 1883, the five floor steel structure features living quarters for its keepers, and other floors dedicated to recreation. It is the only lighthouse in Westchester County, and is located in the Kingsland Point Park. 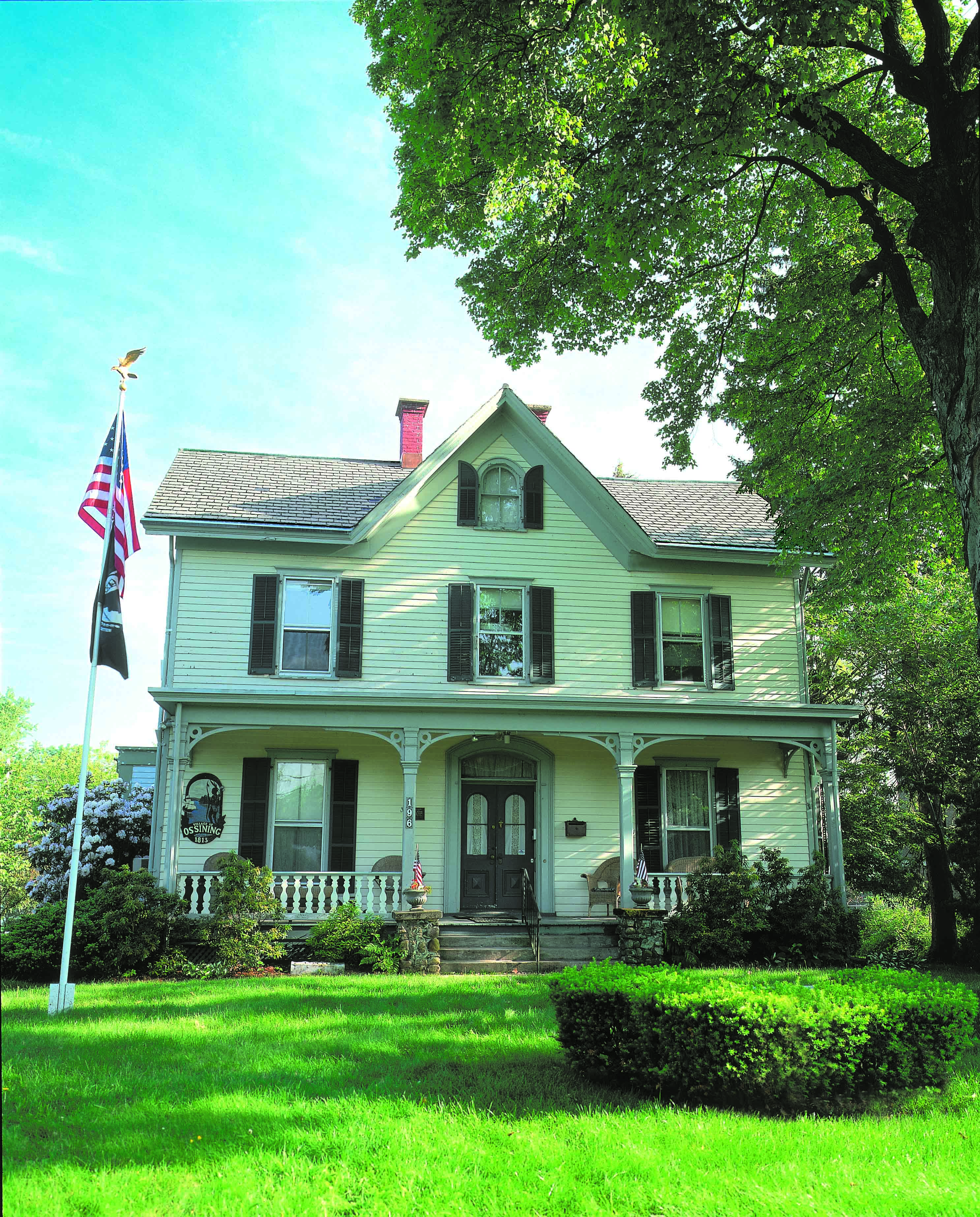 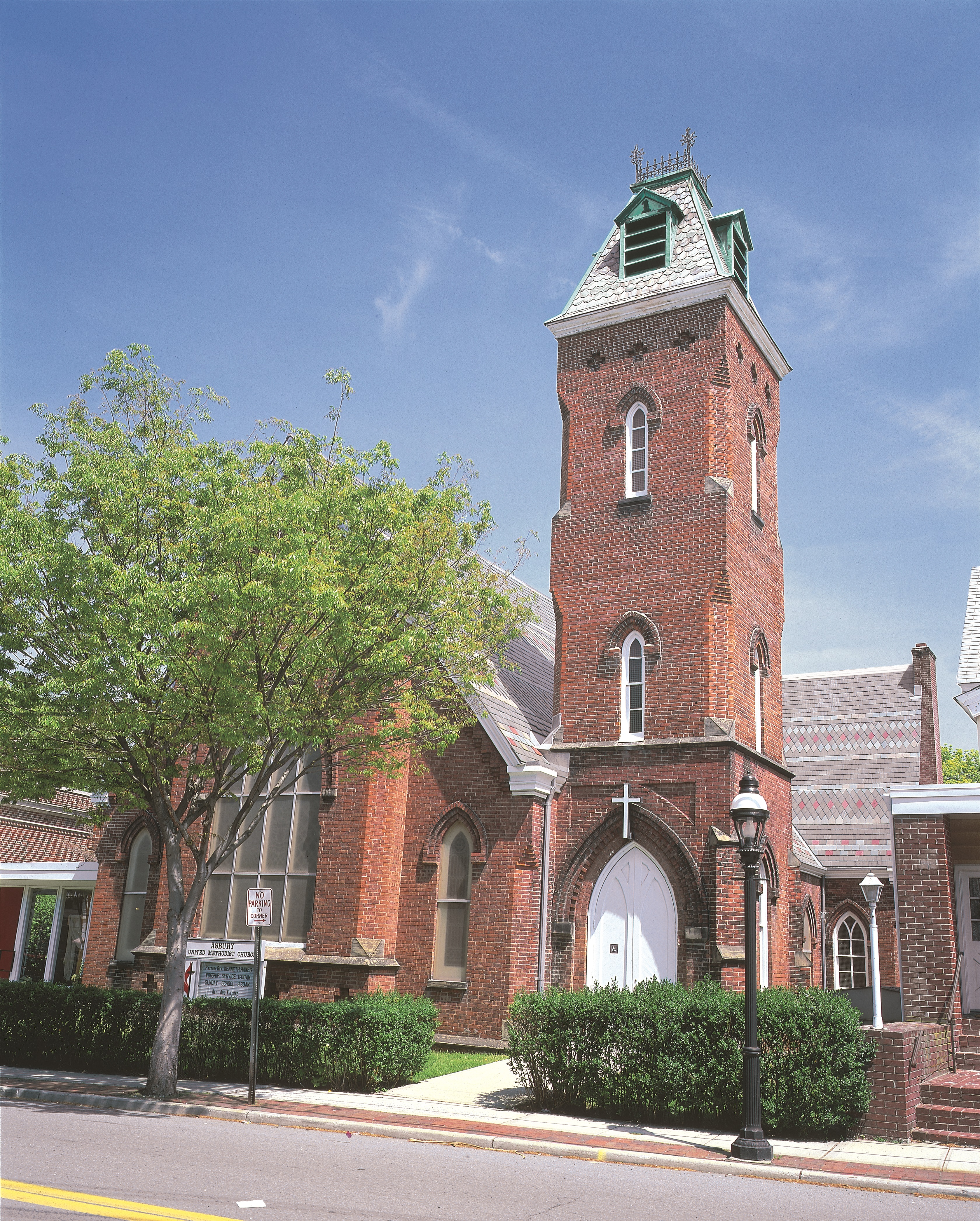 Founded in the late 18th century, the Methodist congregation in Croton-on-Hudson originally worshiped at the meeting house now known as Bethel Chapel. As the congregation grew, it made the decision to build a new house of worship, and it dedicated this Gothic Revival church in 1883. Although some changes have been made to the interior of the church, its exterior has changed little, and it retains its original slate roof. Today, the church complex includes the Educational Building, which is a former County Trust bank, and Wesley House, the church's former parsonage. 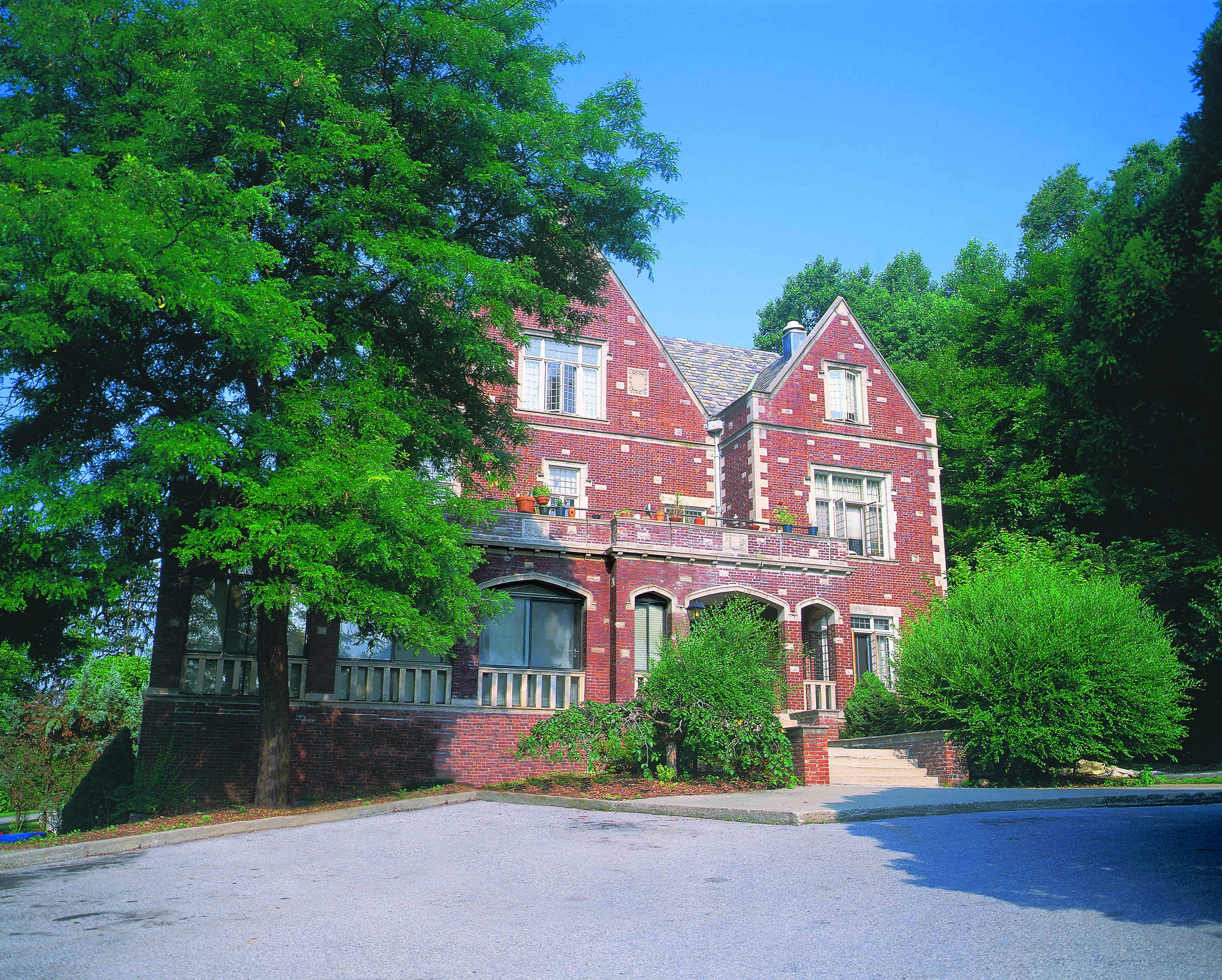 Henry Ward Beecher was a popular and influential Congregational minister. In 1875, Beecher built a summer home on 48 acres of farmland east of the village of Peekskill. After his death in 1887, it sold by his widow. The estate had several owners before it was purchased in 1902 by Louis Ettinger executive of the country's leading color printer, the American Lithographic Company. Today, the original house remains, but the estate has been divided into condominium apartments. 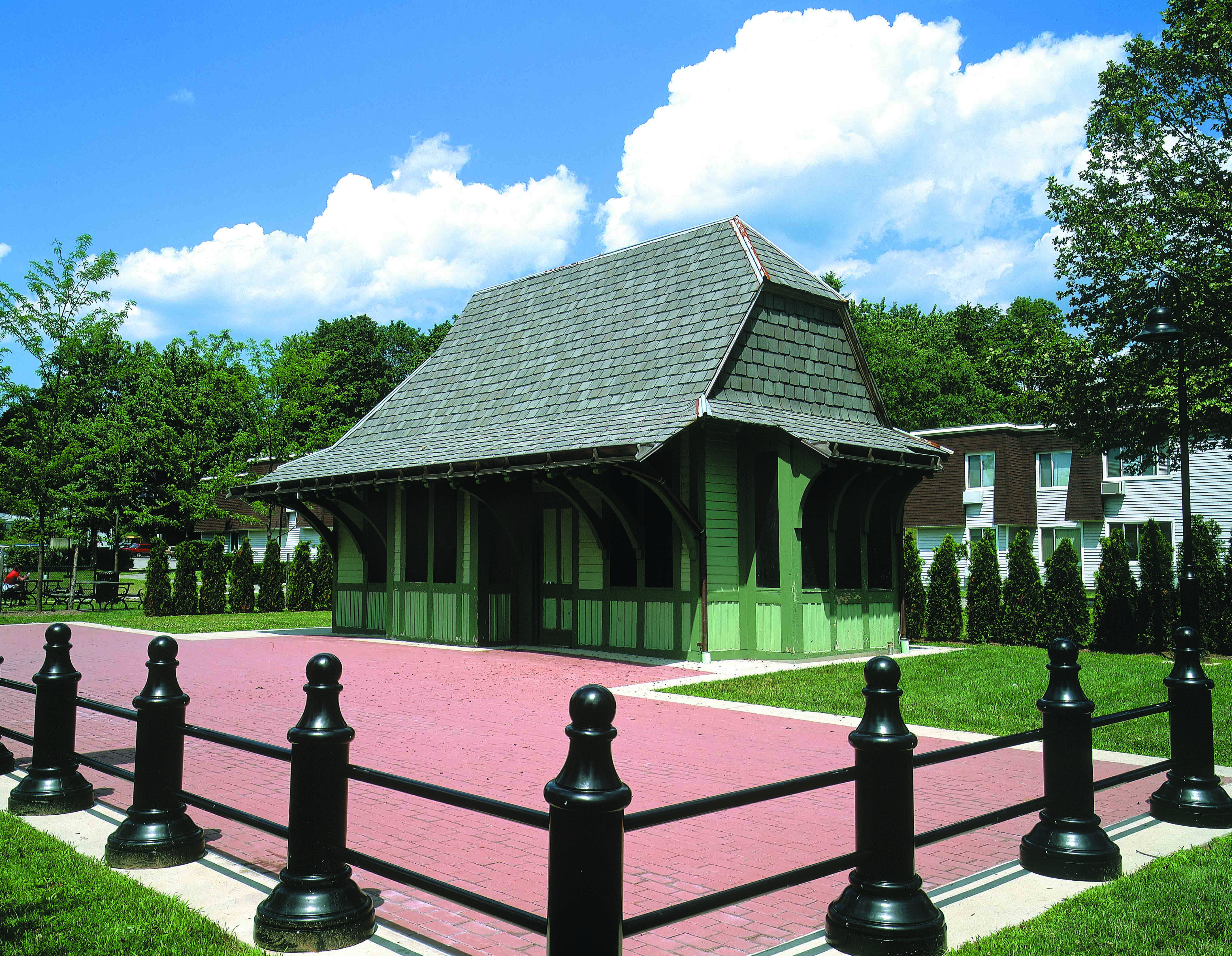 The Yorktown Heights Railroad Station was the town center in the 1880s, surrounded by five stores, a library, a hotel, two locksmiths, a wheelwright, and two churches. The Yorktown Heights station remained in service until the Putnam Division finally shut down on May 29, 1958. It was initially sold for commercial use but became vacant, and in 1966 the Town of Yorktown purchased it. The interior was rebuilt in 1976, and the Yorktown Chamber of Commerce occupied the building until 1982, when a fire forced it to close. The exterior has been renovated in recent years and the surrounding area is landscaped. It now serves as the visual centerpiece of a park that occupies much of the old railroad yard. The station was added to the National Register of Historic Places in 1981. 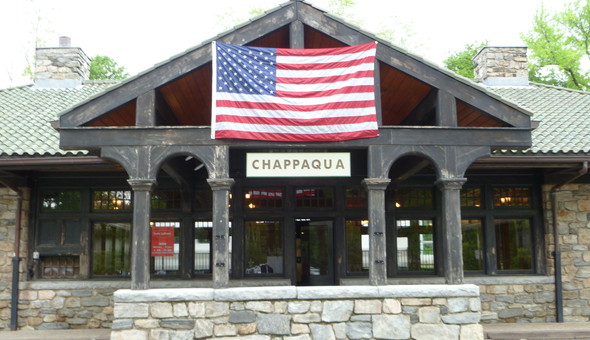 The historic Chappaqua Railroad Depot is still in use as a part of the modern train station and serves as a waiting area for commuters traveling along the Harlem train line. Inside the historic train depot is a café which respects the interior details of the historic station from 1902. When the interior was adapted into a restaurant, it used the original floor plan of the train depot with the main service window and bar seating fitting into the old ticket and concierge booth. 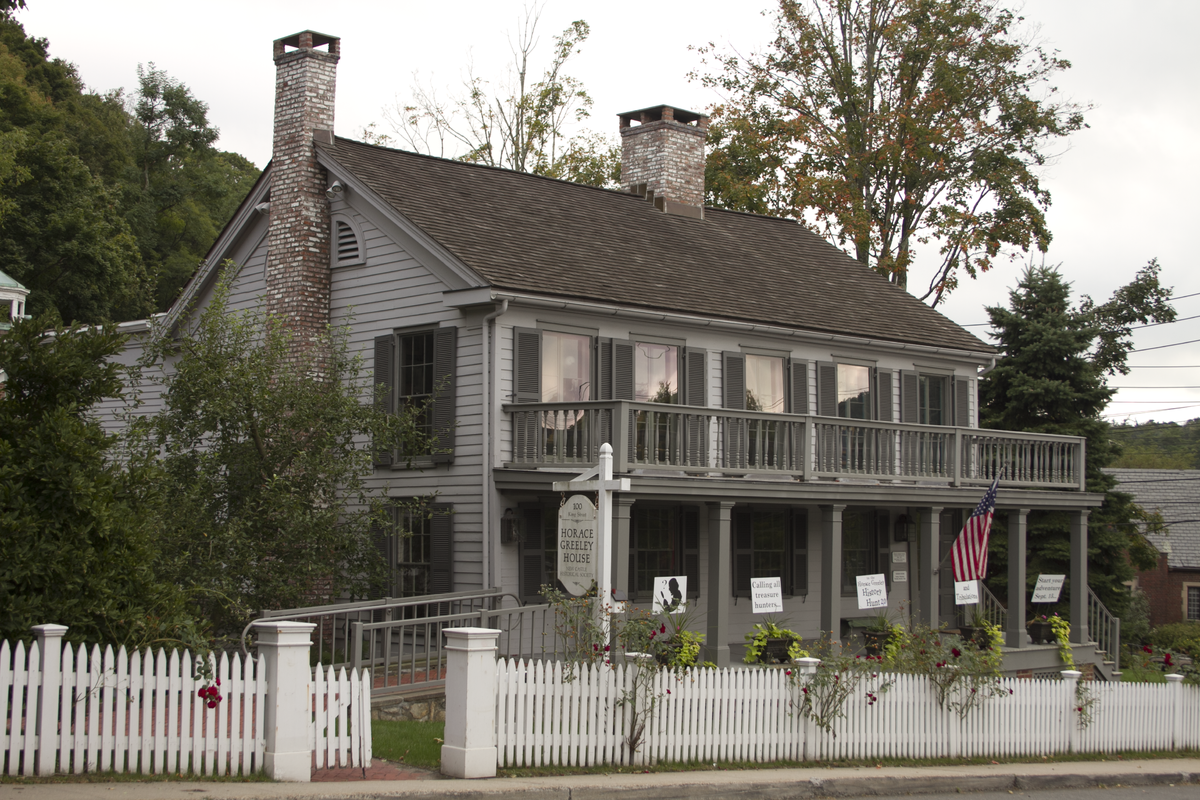 Horace Greeley was a journalist and politician and one of the most influential Americans of the mid-1800s. The home in Chappaqua is one of several associated with Greeley, but the only one still extant. The Greeleys bought the house in 1864, several years after purchasing a farm in the area. The home is listed on the National Register of Historic Places and a museum open to the public. It also houses the offices of the New Castle Historical Society. 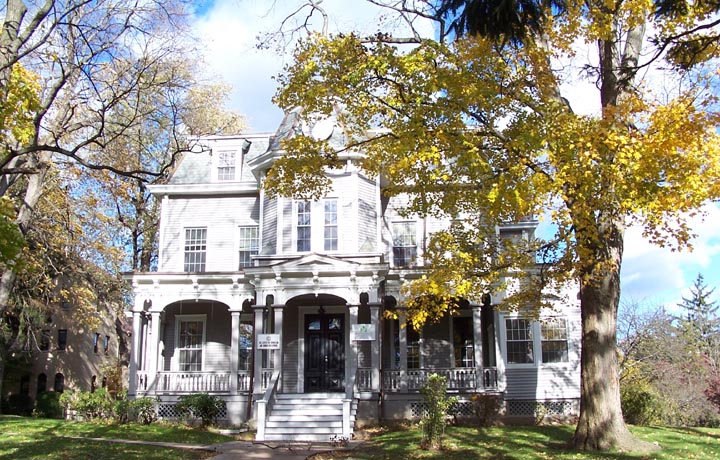 Mapleton, also known as Alumnae House, is one of the few surviving suburban villas in that area of North Broadway in White Plains. Mapleton was built in the Second Empire and Italianate style and while it's use changed with each subsequent owner, its exterior appearance remains intact. Mapleton was added to the U.S. National Register of Historic Places in 1976 because of its outstanding history and architecture. 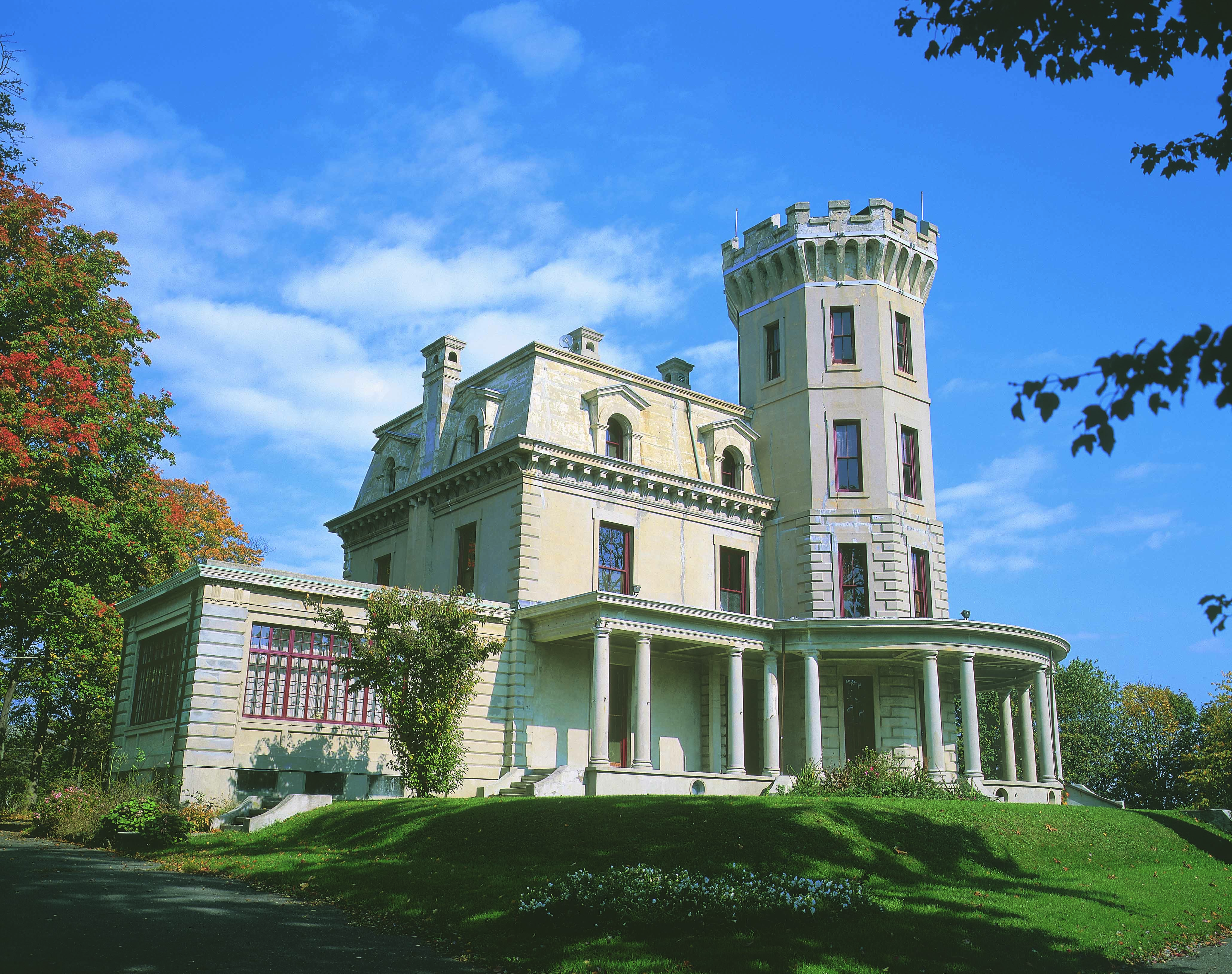 The home popularly known as Ward Castle was one of the most unique structures in Westchester County when it was completed in 1876. It was built by William E. Ward, who was a partner in the Russell, Burdsall &amp; Ward Bolt and Nut Company in Port Chester. Ward desired a home built of fire-resistant concrete, and he hired architect Robert Mook to design such a house for him. Construction, which Ward personally oversaw, began in 1873, and took three years to finish. Some area residents who were skeptical of Ward's idea originally called his home Ward's Folly. Once the structure proved to be stable, it became popularly known as Ward's Castle, and is believed to be the first residence in the United States to have been built entirely out of concrete. The home remained in the Ward family to 1972, and was the home of the Museum of Cartoon Art from 1977 to 1992. It is now a private residence.