Short tempered Confederate General Wise threatened to blow up the Littlepage Mansion when the wife of Confederate soldier Adam Littlepage refused to give the house up to be used as his headquarters. Rebecca Littlepage stood firmly on her front porch surrounded by her six children and no one would fire the artillery at them, thus sparing the home and their lives. Rebecca was left a widow because of the Civil War and eventually had to sell off much of the land to pay taxes and support her seven children.

War at The Front Door Marker 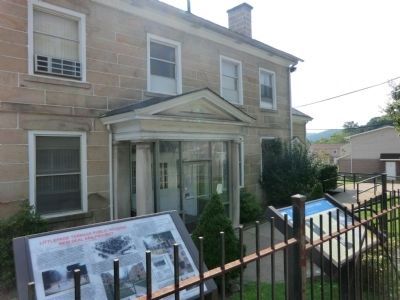 War At The Front Door Marker 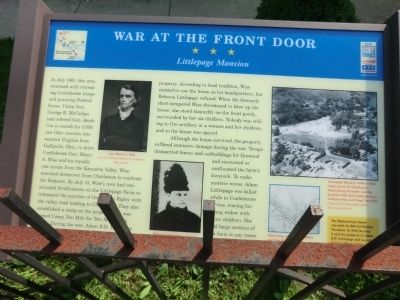 The Littlepage Mansion was constructed in 1845, and is one of only six houses within the city of Charleston WV that was erected before Civil War times. This mansion sat on approximately four acres at the time of the Civil War.

During the Civil War, Rebecca Littlepage found her home became the center of conflict between Confederate soldiers and pursuing Union troops. Confederate General Wise wanted to use the home as his headquarters, but Rebecca refused to allow this. Wise then threatened to destroy the home should Rebecca defy his authority, but she stood her ground. When ordered to fire upon the house, Confederate soldiers refused to do so as Rebecca and her children refused to leave the home. Rebecca saved the home from destruction, but the property was damaged as soldiers dismantled the outbuildings for firewood and either confiscated or consumed the farm's livestock.

In 1862, the  Littlepage Mansion was the victim of misdirected bombardment by Union forces, but the house only sustained minor damage. Rebecca's husband, A. Littlepage, was killed while in Confederate service in April of 1862, leaving her a widow with seven children. Rebecca would eventually have to sell off some of the farm to pay taxes and support her family.