Culloden Elementary School, formally Culloden School, opened its doors in 1933 at the current site. The school started as a single story four room schoolhouse teaching first through eighth graders. Through the years, additions were made to the original building until, in 2014, the front half of the school was demolished to make way for a much needed renovation. Today Culloden Elementary School continues to teach students in preschool thru 5th grade as a West Virginia School of Excellence.

Culloden Elementary as it stands today

The original building before renovation 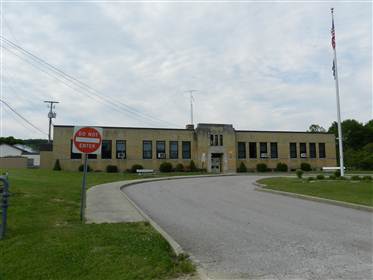 Before Culloden Elementary School existed, Seashoal School was built in 1870 as a one-room schoolhouse about a half mile from the current site by Dr. Seashoal as the sixth school in Grant District. Dr. Seashoal’s daughter Brin Seashoal originally taught a class of 15 to 20 students basic reading, writing, spelling and arithmetic. After the school outgrew its original building, it was torn down to make way for a new building in 1892, which was built on the same site. Seashoal School served the area until 1911, when a new two room school was built where First Missionary Baptist Church currently sits.

Twenty-two years later in 1933, Culloden School was built to replace Seashoal School on the current site. The new school was a modern single-story building with four classrooms and a principal’s office over the entrance way. The kitchen and cafeteria were in the basement, which was only accessible from outside, and the restrooms were located next to a nearby creek. The school had an enrollment of 125 students in first through eighth grade.

In a few years the school needed its first expansion, and two classrooms were added along with a library and indoor restrooms. In 1952, a new kitchen and food storage area were added along with a gym, or playroom as it was called, for physical education. Throughout the next several decades, several new rooms were added, and existing larger rooms were enclosed into multiple smaller rooms. In 1987, a new multipurpose room was constructed to act as the gym, cafeteria, kitchen, PE office, and two additional restrooms. The existing playroom was remodeled into two classrooms and the old kitchen became new offices for the administrators.

In 2013 the West Virginia Board of Education named Culloden Elementary School a West Virginia School of Excellence. Later the same year, Cabell County and Culloden Elementary were awarded $7.5 million to renovate the original front section of the school by the School Building Authority. With the money, Culloden school demolished the front section of the school and added new modern class rooms along with a media center, two new computer labs, and an auxiliary gymnasium. The construction was started in the spring of 2014 and finished in the winter of 2016. The original Culloden School sign was kept and placed above the main entrance as a reminder of the school’s history.

Agriculture and Rural History
History of Public and Higher Education