Woody Williams was 21 years old when his Marine commanders at Iwo Jima, on February 23, 1945 (the same day that the U.S. flag was raised at Mt. Suribachi) asked him if he could take out Japanese pillboxes with a flamethrower. Woody’s reply was, “I’ll try.” Four riflemen were given to protect him as he took out pillboxes armed only with a flamethrower. In four hours, he had cleared seven of them. Later that year, he was awarded the Congressional Medal of Honor for “conspicuous gallantry and intrepidity at the risk of his life above and beyond the call of duty.” 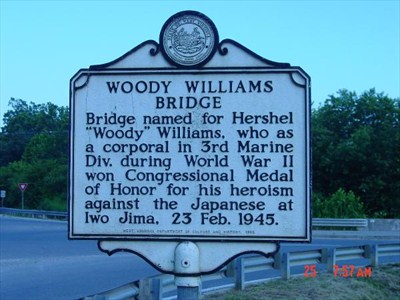 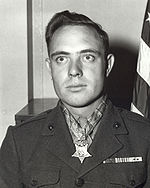 Woody Williams, from the Fairmont area of West Virginia, was at first turned down from serving in the Marines due to his short height, but joined when the height requirement changed. He served as a corporal in the 3rd Marine Division and participated in Guadalcanal and Guam. On February 23rd 1945, he and four riflemen, ordered to protect him, crawled through the sands of Iwo Jima under fire from Japanese machine guns and using a flamethrower cleared out seven pillboxes in the span of four hours. During this time he had to crawl back to cover to get additional flamethrowers. At one point, charging Japanese soldiers with bayonets were closing in on him and he took them out with his flames. At another point, he physically stuck the end of the flamethrower through the opening in the pillbox in order to flame it out. Two of the four men tasked with protecting him died that day, yet many more were saved from unrelenting machine gun fire from the pillboxes.

Woody Williams received a Purple Heart for wounds he received on March 6th. On October 5, 1945, he received the Congressional Medal of Honor from President Harry S. Truman at the White House. The medal Woody had dedicated to those two fallen protectors on Iwo Jima. Woody continued to serve stateside as a reserve under various assignments until 1969. Woody had this bridge dedicated in his honor, as well as the West Virginia National Guard Armory in Fairmont.