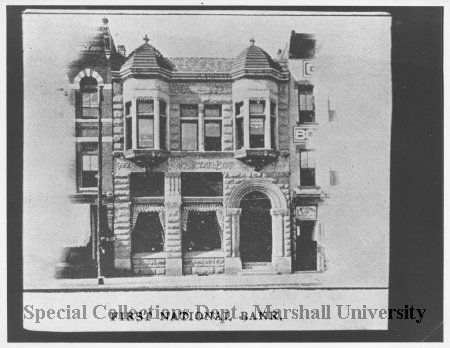 The 3rd Avenue bank during the 1913 flood 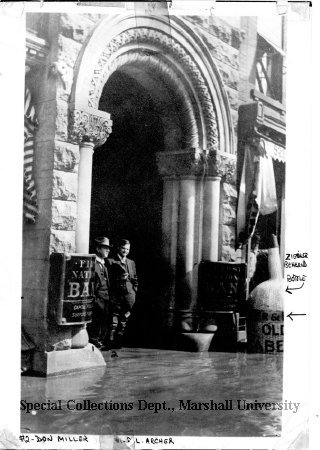 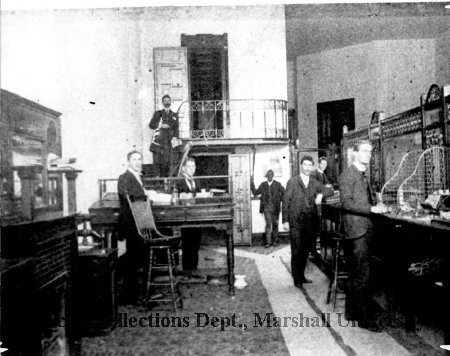 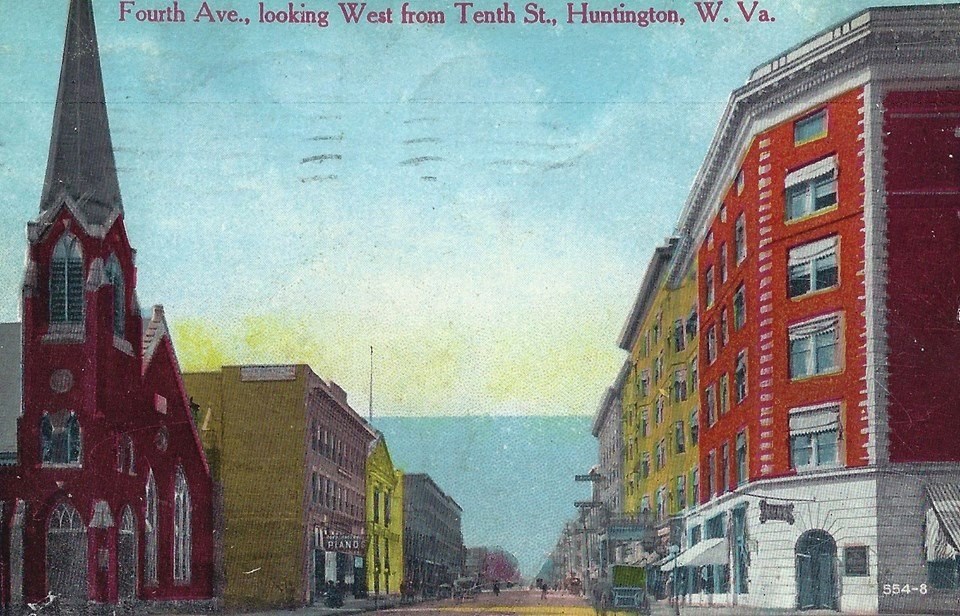 The structural steel under construction for the First Huntington National Bank circa 1913. Courtesy of Patrick Morris 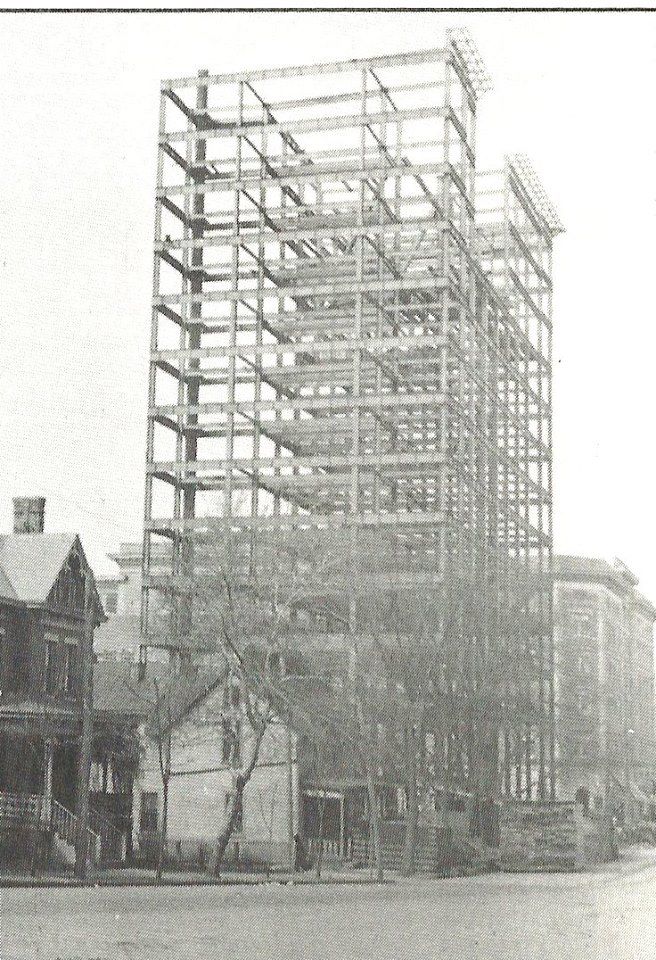 Postcard of the First National Bank, circa 1915 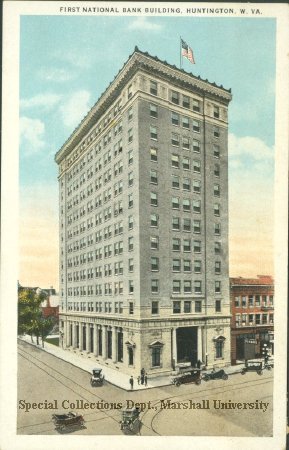 Postcard of the First National Bank, circa 1920 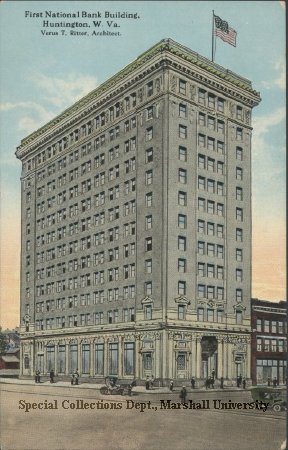 Interior of the First National Bank 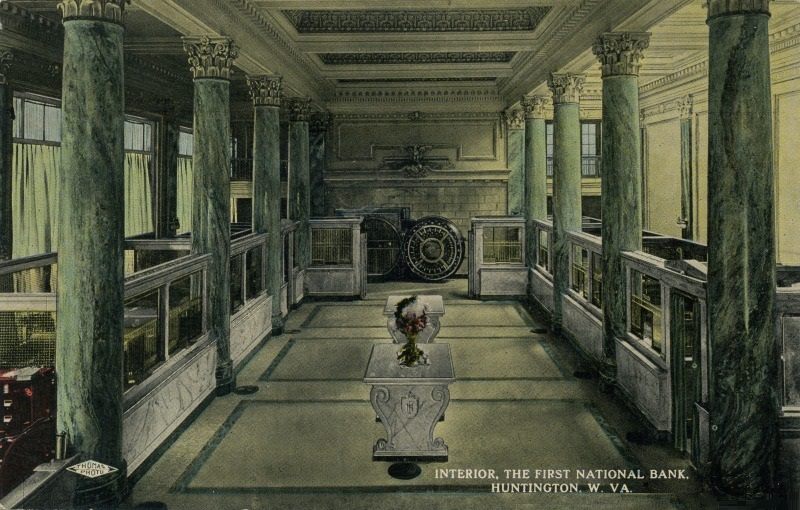 4th Ave looking west, with the bank in the background, circa 1925 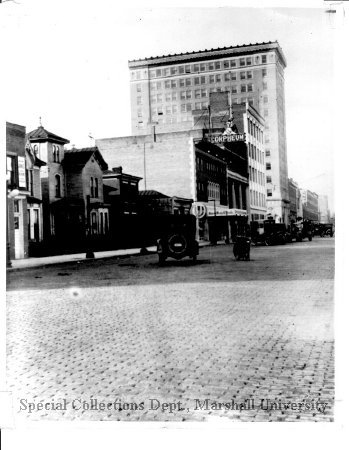 Construction of the 1925 addition 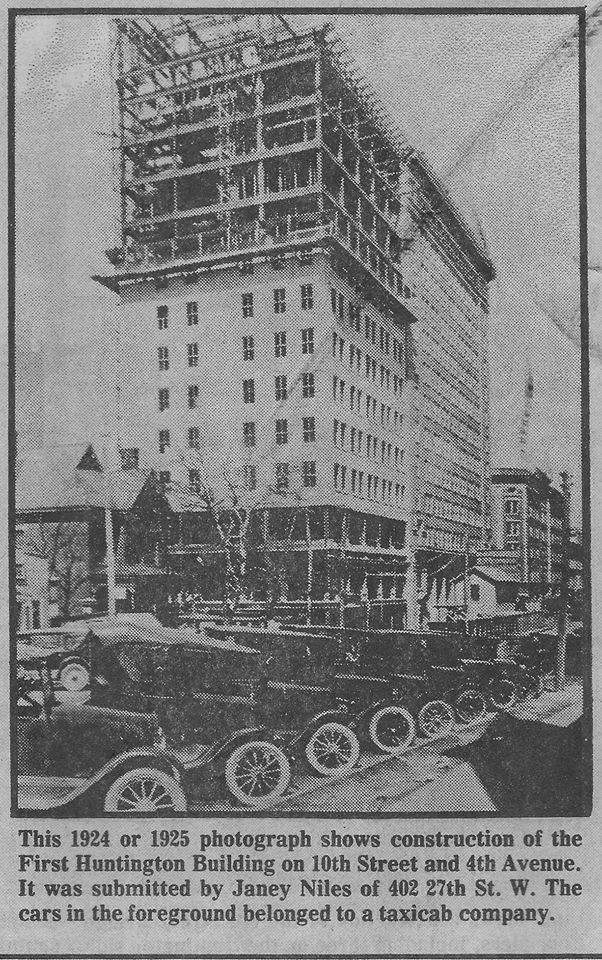 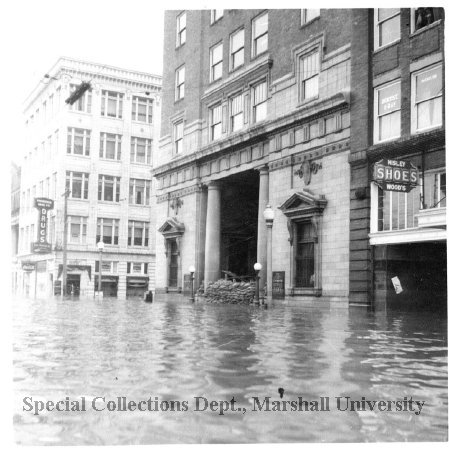 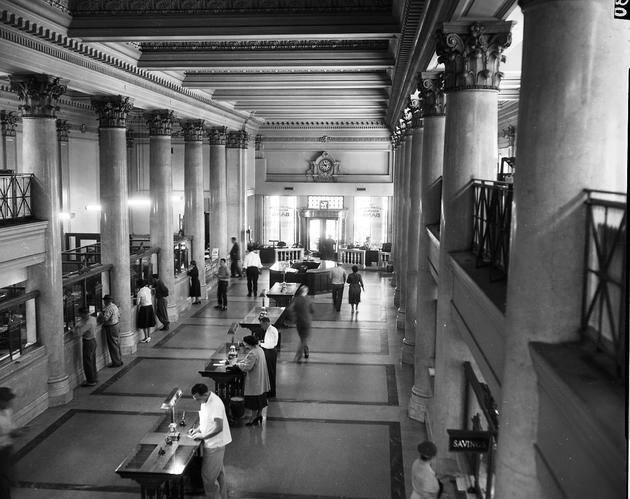 The structural steel under construction for the First Huntington National Bank circa 1913. Courtesy of Patrick Morris

When the city of Huntington was founded in 1871, enterprising businessmen soon flocked to the growing industrial and commercial center. Alongside the retailers and hotels that comprised its small downtown, it was necessary for the young city to have a bank. In 1888, the First National Bank was organized by George F. Miller, J. L. Caldwell, D. I. Smith, W. H. Hagen and other prominent businessmen. Caldwell served as its first president until his death in 1923, and Miller was executive vice president until he passed away in 1910. The bank was located in an elegant stone building at 926 3rd Avenue, which is now the site of Pullman Square. First National Bank was the second bank to open in Huntington, after the Bank of Huntington was chartered in 1875. The Bank of Huntington, which was the site of a notorious bank heist in 1875, merged with the Commercial National Bank in 1894 to form the Huntington National Bank.

As Huntington grew, becoming West Virginia’s largest city by 1910, the First National Bank prospered and soon required a larger space. In 1912, the owners of the First National Bank purchased a lot at the southwest corner of 4th Avenue and 10th Street. The lot had formerly been the site of the First Methodist Episcopal Church, which was constructed in 1875. Architect Verus T. Ritter was hired to design the new twelve-story bank building. Ritter was one of Huntington's most famous architects and had designed many other notable buildings in the city, such as the Johnson Memorial Methodist Church and Huntington City Hall. He designed the new bank in the Renaissance Revival architectural style, with an embellished first floor facade and a flat roof with decorative overhanging eaves. Upon its completion in 1914, the bank occupied the ground floor while the office spaces on the building’s upper floors were quickly rented by doctors, lawyers, and other professionals.

In 1925, the First National Bank merged with the Huntington National Bank to form the First Huntington National Bank (FHNB). With this change, the bank needed more space, prompting the construction of a twelve-story addition on the south side of the building along 10th Street. The expansion was designed and overseen by Meanor and Handloser, another prominent architectural firm in Huntington. They followed the design style of the original building so well that it was difficult to tell where the first building ended and the new section began.

In 1977, the First Huntington National Bank relocated to a new building on 5th Avenue, where it became the first bank in the area to offer 24-hour services. The Old National Bank of Huntington moved into the 4th Avenue building in 1981, before the St. James Condominium Association purchased and renamed the building six years later. The new owners paid $6.7 million for both the building and for the extensive renovations that they made. While the Old National Bank remained the ground floor tenant, the upper six floors were remodeled into luxury apartments. After the Old National Bank closed, the Fifth-Third Bank operated a branch out of the building’s ground floor from 2001 to 2011. As of 2019, the First State Bank of Barboursville occupies the first and second floors of the St. James Building. There are also a number of businesses and offices on the floors above, including the Huntington branch of the Word House Inc., McClure Goad PLLC., and Bailes, Craig & Yon PLLC. The sixth through twelfth floors hold apartments managed by the St. James Condominium Association.