Jim's Steak and Spaghetti House has been a prominent family-owned and operated restaurant in Huntington, West Virginia since 1938. Originally known for its cheap hamburgers and milkshakes, founder Jim Tweel expanded his business by adding a Spaghetti House next door in 1944. The two businesses merged four years later, and the restaurant was remodeled and given its current name in 1962. Tweel’s daughter, Jimmie Tweel Carder, has managed the restaurant since 1994. Jim’s maintains a classic diner theme with its nostalgic atmosphere, green booths, and waitresses’ white uniforms. The restaurant, which is best known for its signature spaghetti sauce and homemade strawberry pie, is frequented not only by Huntington residents but also by celebrities and politicians who visit the Tri-State area. Jim’s celebrated its 80th anniversary in 2018. 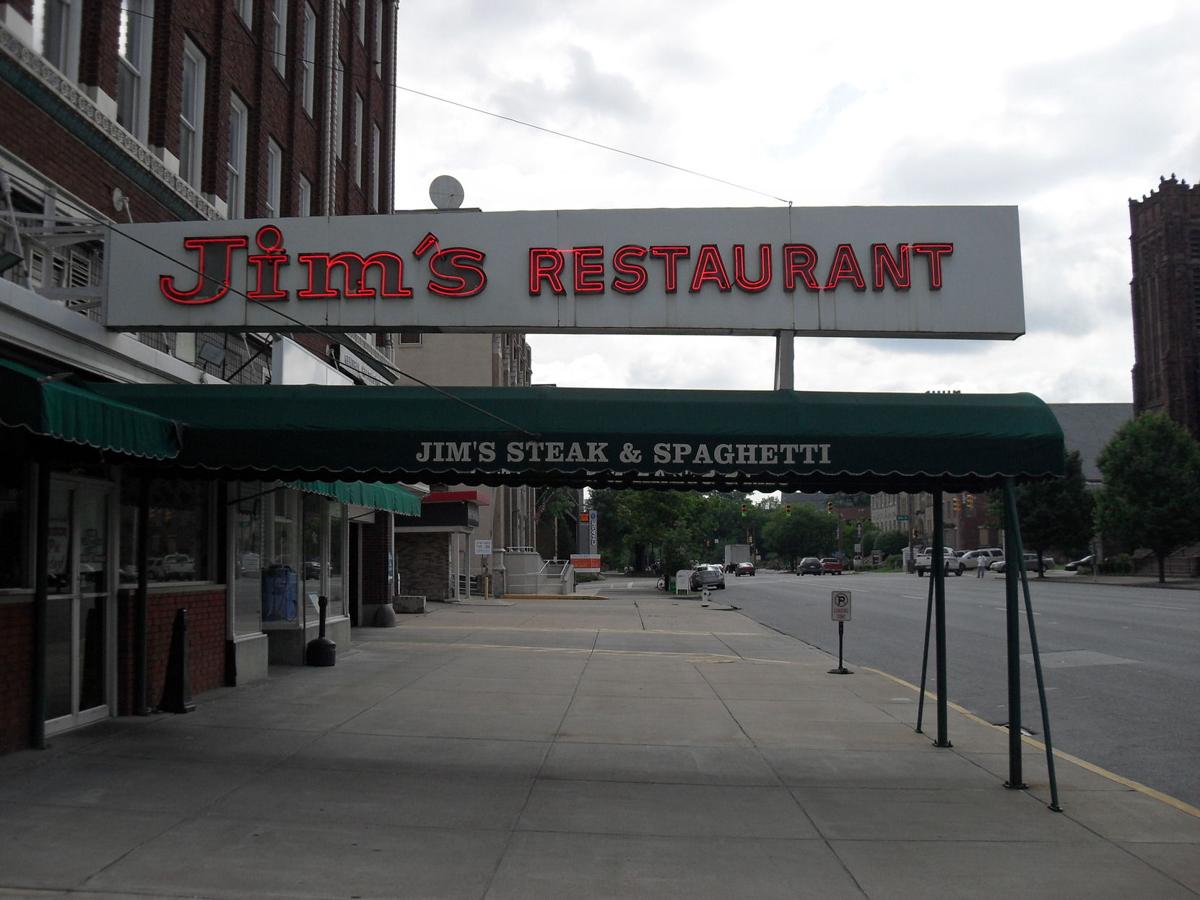 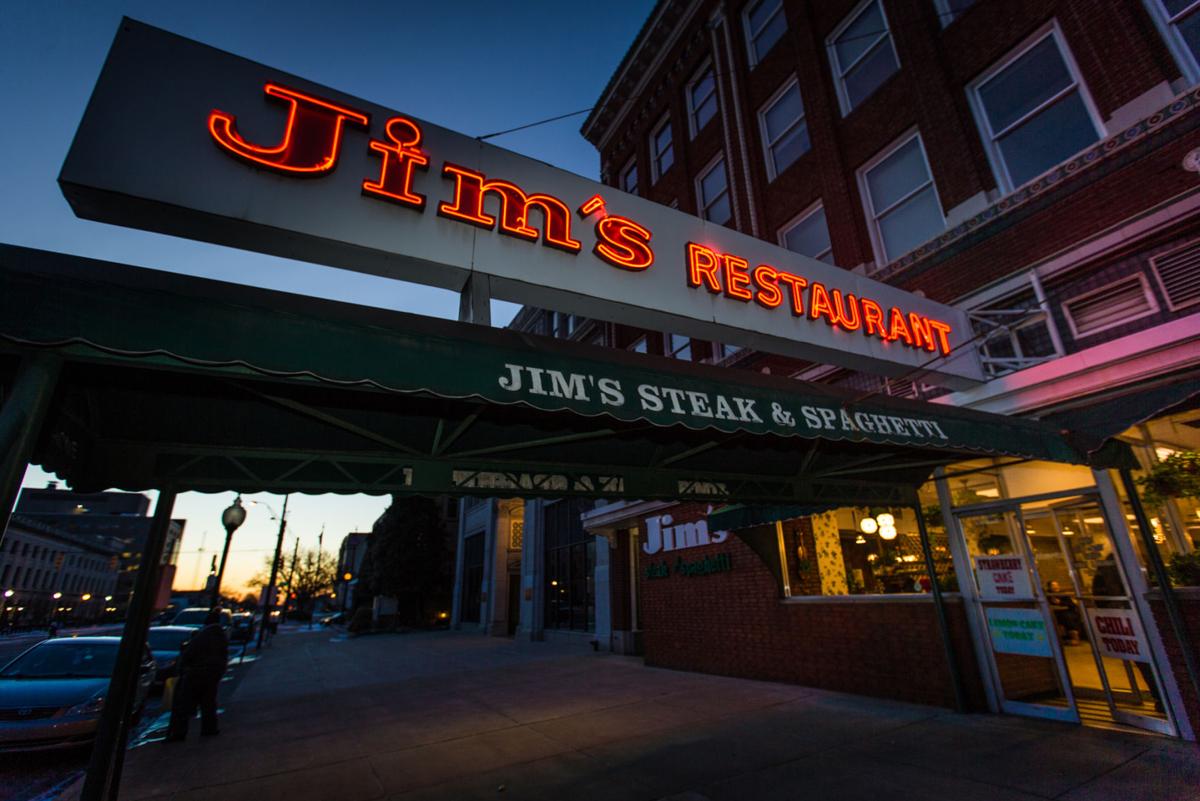 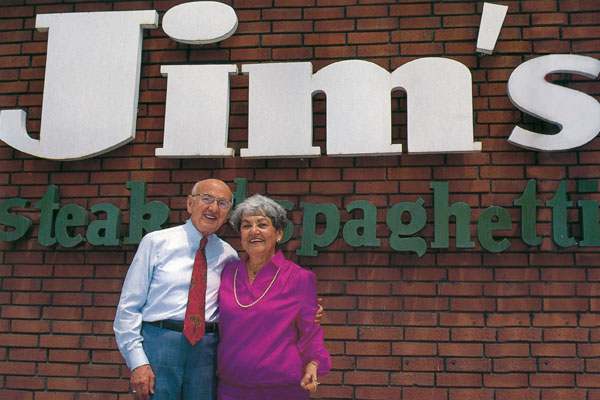 Jim's counter on a busy day 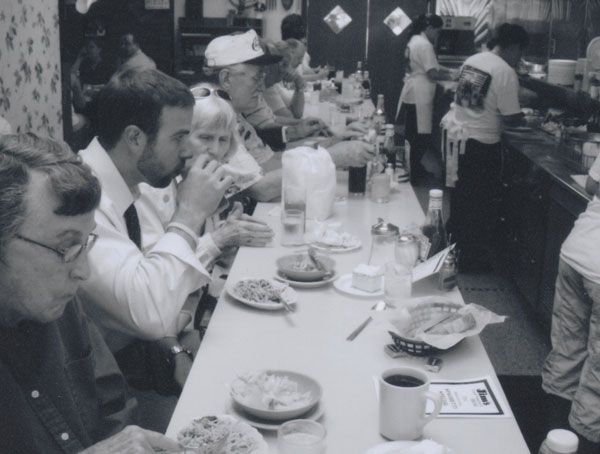 Inside Jim's back in the day 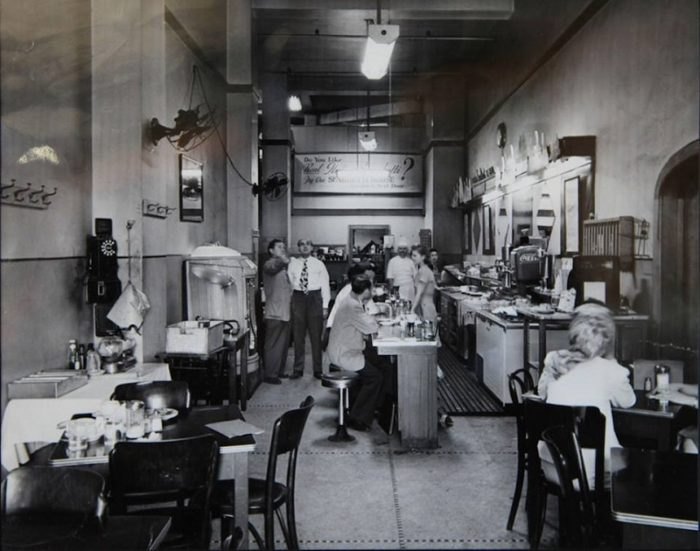 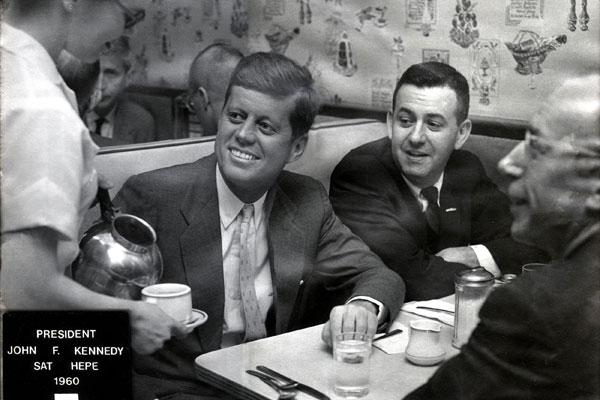 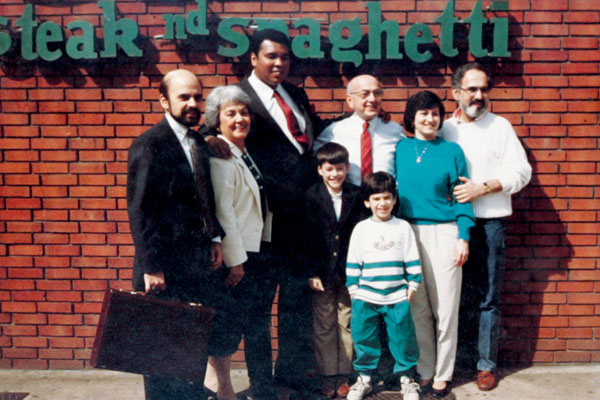 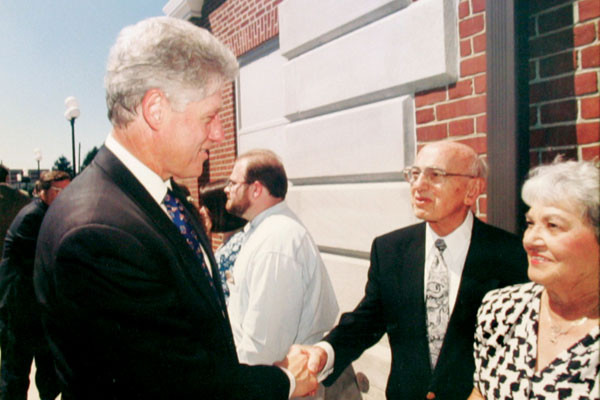 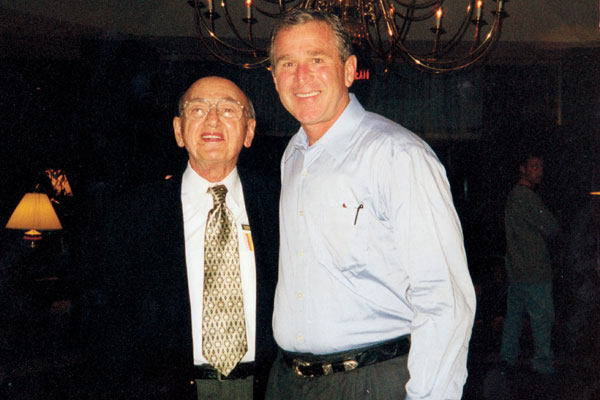 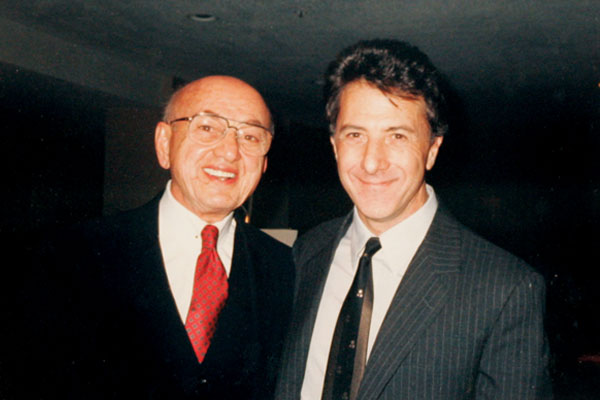 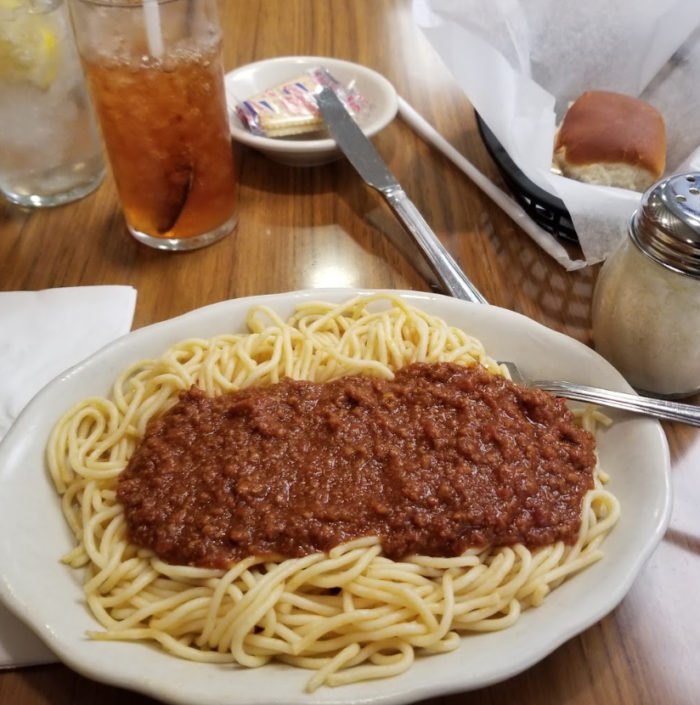 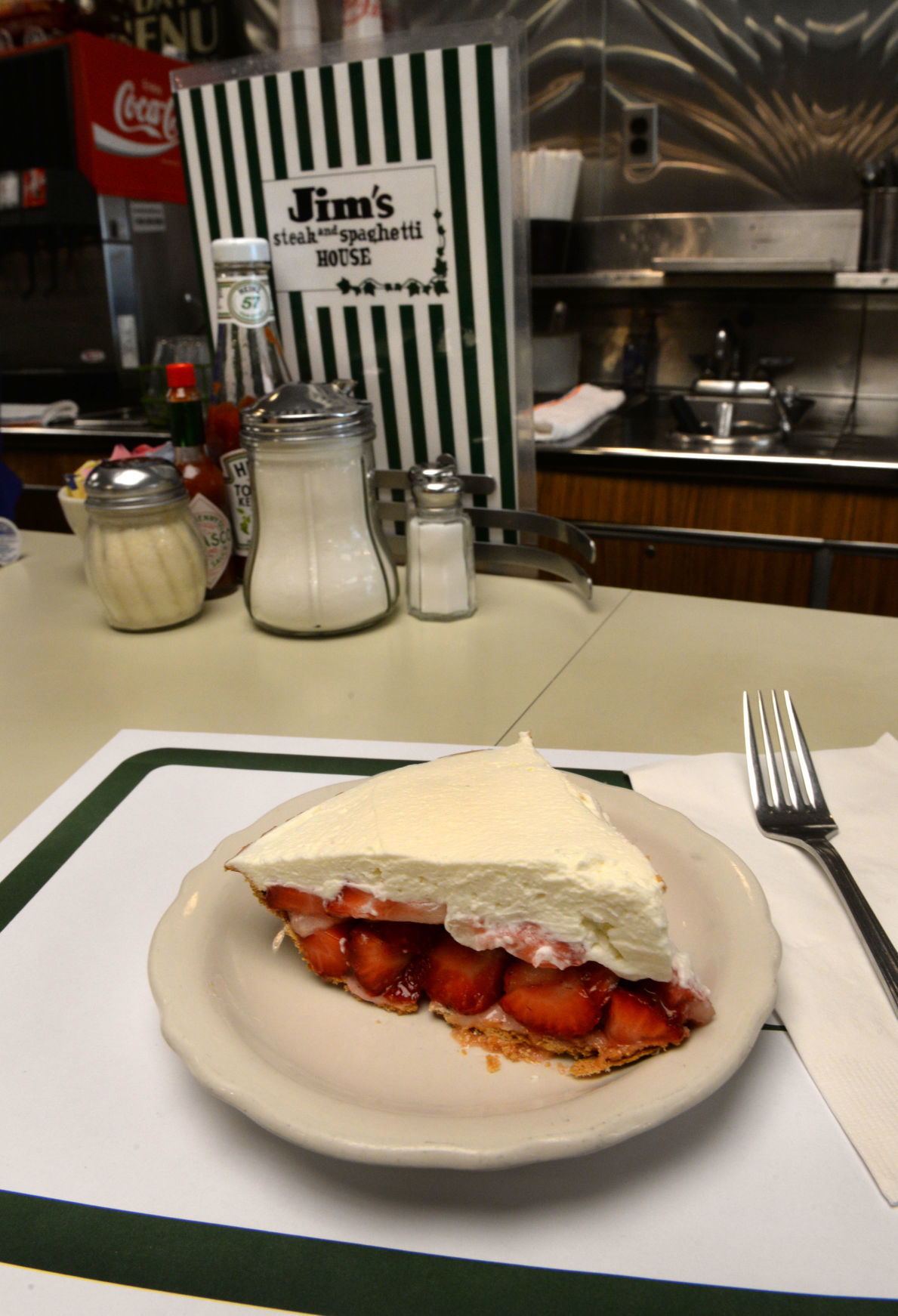 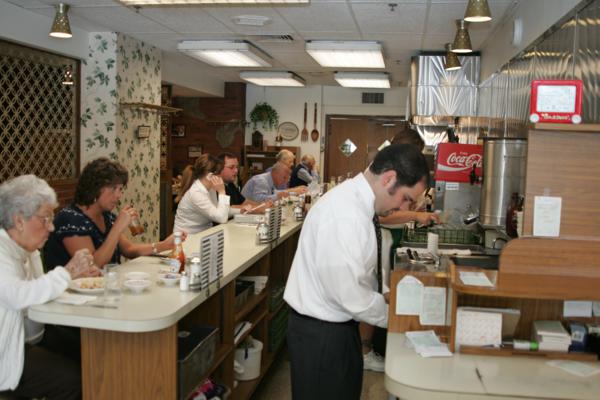 Jim Tweel with his staff 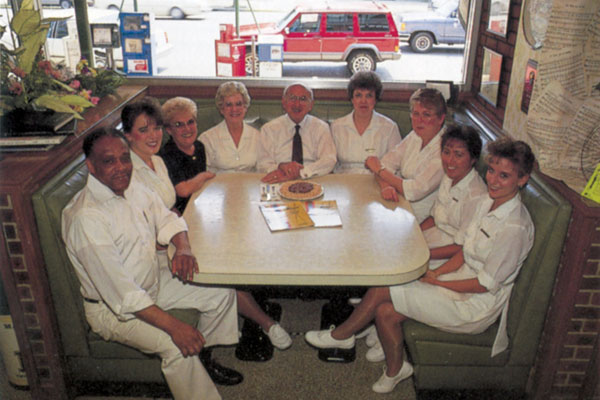 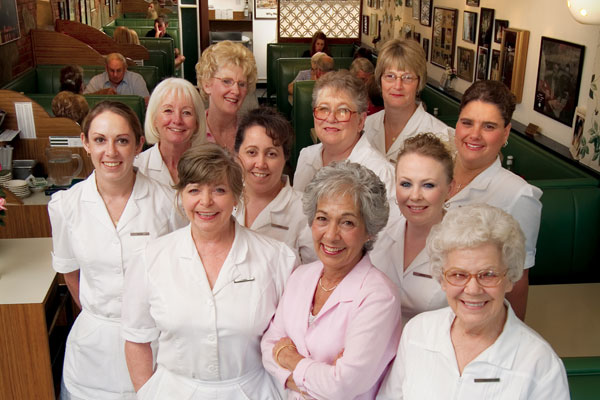 Jim's Steak and Spaghetti House has operated out of the same location for over eighty years. Jim Tweel borrowed $1,500 to open his own restaurant at 920 Fifth Avenue in 1938. There, Tweel and his wife Sally turned the old Kennedy Dairy Store into a small restaurant known for five-cent ice cream cones, ten-cent milkshakes, and fifteen-cent cheeseburgers. The restaurant often stayed open past midnight, as customers liked to come in after going to late-night dances. In 1944, Tweel met Roberto Elmoro, an Italian man who offered to help him open an Italian restaurant in Huntington. Tweel opened The Spaghetti House on July 14, 1944. The restaurant, which occupied the room next door to Tweel’s dairy bar, served Elmoro’s original recipe for spaghetti sauce.

Over the years, Jim's has been a popular eatery for locals as well as celebrities and public figures who have passed through Huntington. Several politicians have dined at the restaurant while campaigning in the Tri-State area. John F. Kennedy ate breakfast at the diner during his 1960 presidential campaign, as did Presidents George H.W. Bush and Bill Clinton, and Senator Bob Dole. Celebrities have also enjoyed the food at Jim’s Steak and Spaghetti House, often taking advantage of the diner’s late hours. Some musicians, like Perry Como, went to Jim’s after giving concerts at the Keith Albee Theater or the Dreamland Pool’s Pavilion or Club Continental and Casino in Chesapeake. Muhammad Ali also visited the diner, as did Billy Joel and actor Dustin Hoffman. Signed photographs of Jim's many famous guests now adorn the walls of the restaurant.

The menu at Jim’s Steak and Spaghetti House has changed little over the years. Its signature dish remains its spaghetti, which is served with a choice of meat or marinara sauce and a side of bread. The restaurant is also popular for its ribeye steak dinner, along with sandwiches such as fried haddock fish, cheeseburgers, grilled cheese, and grilled steak and cheese. The restaurant’s sides are also made from Jim’s original recipes, such as its coleslaw. Jim’s is also well known for its desserts, including its signature chocolate, coconut, and banana cream pies. Each May, the restaurant hosts “Strawberry Pie Week,” during which over one thousand fresh strawberry pies are served by the slice. Strawberry Pie Week celebrated its 45th year in 2019.

Jim's Steak and Spaghetti House, which celebrated its 80th anniversary in 2018, continues to provide outstanding food and service to the Huntington community. The diner has been able to hold its own due to its focus on quality, consistency, and good service. Many residents return to Jim’s year after year for its nostalgic atmosphere and dependable menu. While many aspects of the restaurant have not changed much over time, Jim’s has responded in small ways to the changing times. In 2018, the waitresses’ uniforms were changed from white dresses to modern-day slacks to attract younger workers and allow more comfort. The restaurant also recently began accepting credit and debit cards. In 2019, Jim’s Steak and Spaghetti House became the first restaurant in West Virginia to be recognized as the America's Classics winner in the Southeast region by the James Beard Foundation, which has named the nation's beloved regional restaurants each year since 1998.