The Trinity Episcopal Church was created after Huntington, WV, had already been established as a city, and was spearheaded by an associate of Collis P. Huntington. The original structure was built to be the shape of a cross, and could accommodate 500 people. As the population of Huntington grew, Trinity established a parish house behind the church in the 1920s. Trinity is decorated with stained glass made by Louis C. Tiffany of New York that depicts the seven sacraments. Trinity is deeply connected to the Huntington community, and holds food drives, feeds the homeless, and even allows local non-profit organizations to have offices in the parish house. 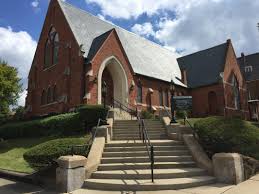 Aerial view of the church to show to cross shape of the building, with the parish house behind the church. 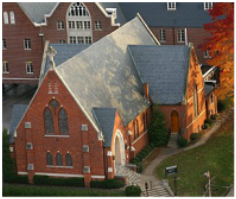 A.A. Low was the New York associate for Collis P. Huntington, the founder of Huntington, WV, and was the original owner of the land that Trinity Episcopal Church now resides on. The Low family also largely funded the costs needed to start the church. In 1883, construction of the original Trinity Episcopal Church started, and was complete by 1884. The church was designed to be the shape of a cross, and can sit 500 people comfortably. A new parish house was constructed in the 1920s behind the original structure, and was completed in 1924 for a total cost of $100,000. The cloister of the church connects the chapel with the parish house, and contains Willet stained glass windows that portray the seven sacraments. The parish house has a small chapel on the first floor that is utilized for small weddings and funerals. Trinity has stained glass created by Louis C. Tiffany of New York, Willet Studios of Philadelphia, and also some pieces created locally in Huntington.