Located along Second Avenue (now Veterans Memorial Boulevard) between Ninth and Eleventh Streets, the Gwinn Brothers Milling Company was a fixture of downtown Huntington for over seventy years. Founded in 1889 by brothers O.E. and W.W. Gwinn, the mill grew into a successful business that produced hundreds of barrels of flour and cornmeal and hundreds of tons of animal feed each day. The youngest Gwinn brother, D.B. Gwinn, gradually took on a greater role in the company and went on to succeed W.W. Gwinn as company president in 1915. Despite undergoing several renovations and expansions over the years, the business was struggling to make ends meet by the end of the Second World War. James A. Gwinn took over after D.B. Gwinn passed away in 1951, and ran the company until his own death in 1961. At that point, the remaining members of the family sold their majority interest and dissolved the company. Martha White Mills briefly took over operations of the grain elevator and flour mill in 1964, but in 1970 the mill was demolished as part of Huntington’s downtown urban renewal project.

The Gwinn farmhouse in Glenwood, WV 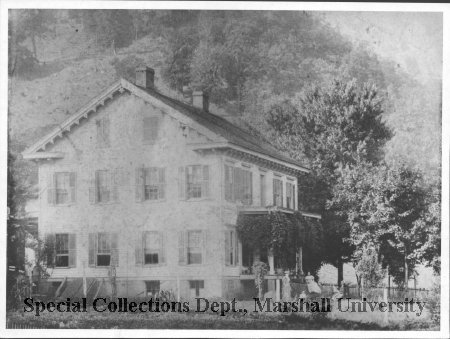 Sketch of the Gwinn Bros. Mill from the 1893 Sanborn fire maps 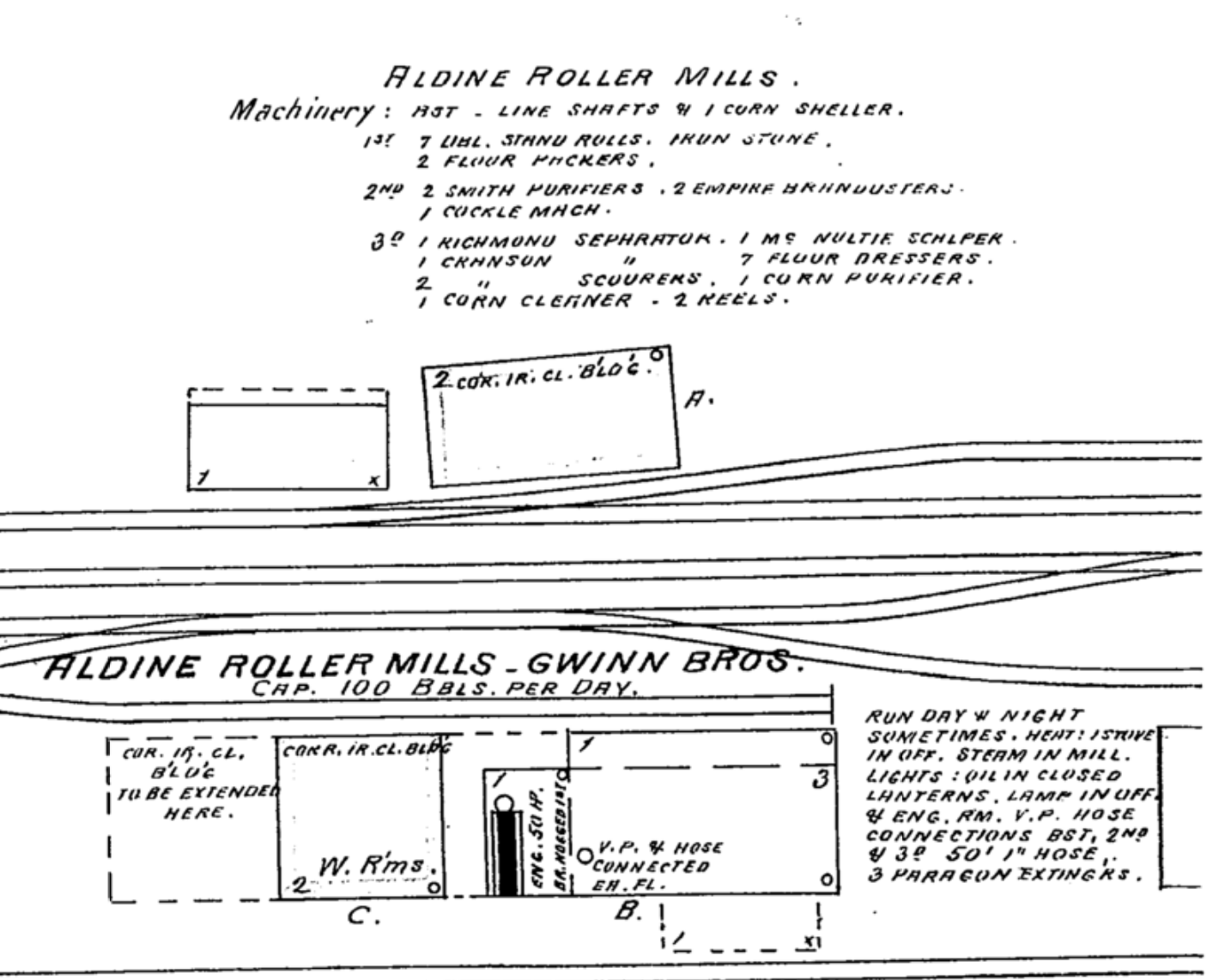 Sketch of the Gwinn Bros. Mill from the 1898 Sanborn fire maps 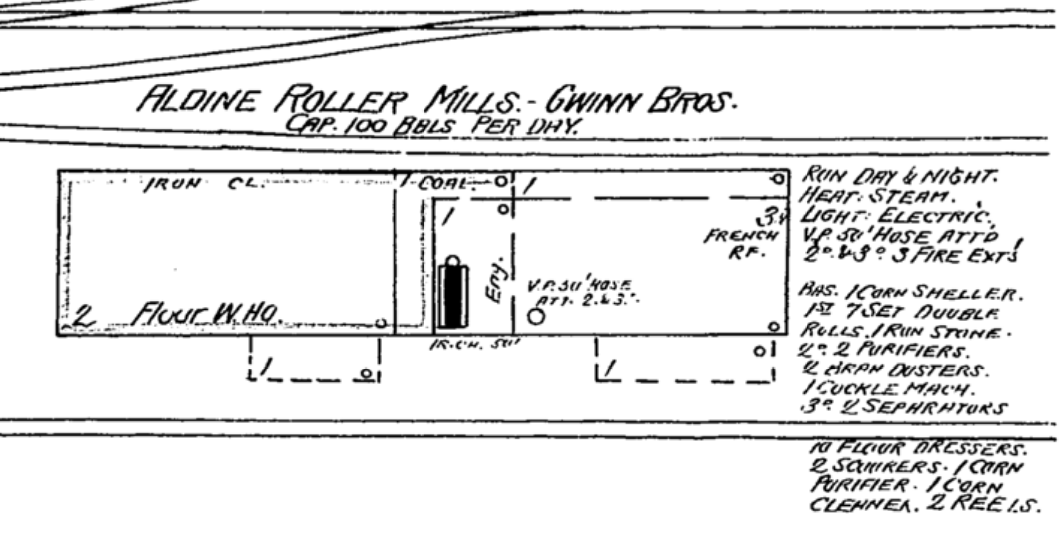 Sketch of the Gwinn Bros. Mill from the 1904 Sanborn fire maps 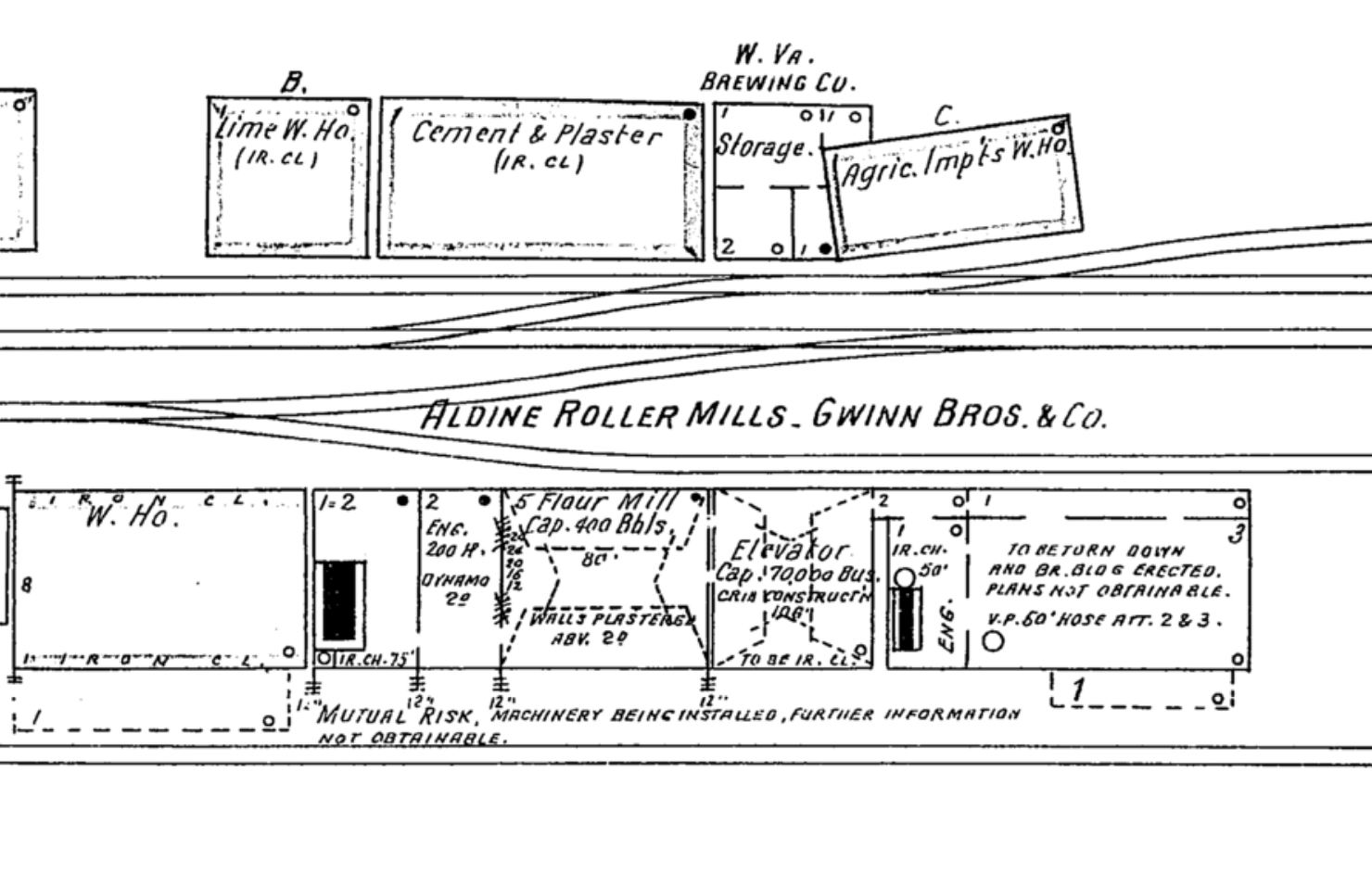 Looking towards the Ohio River, with the mill visible in the background, circa 1912 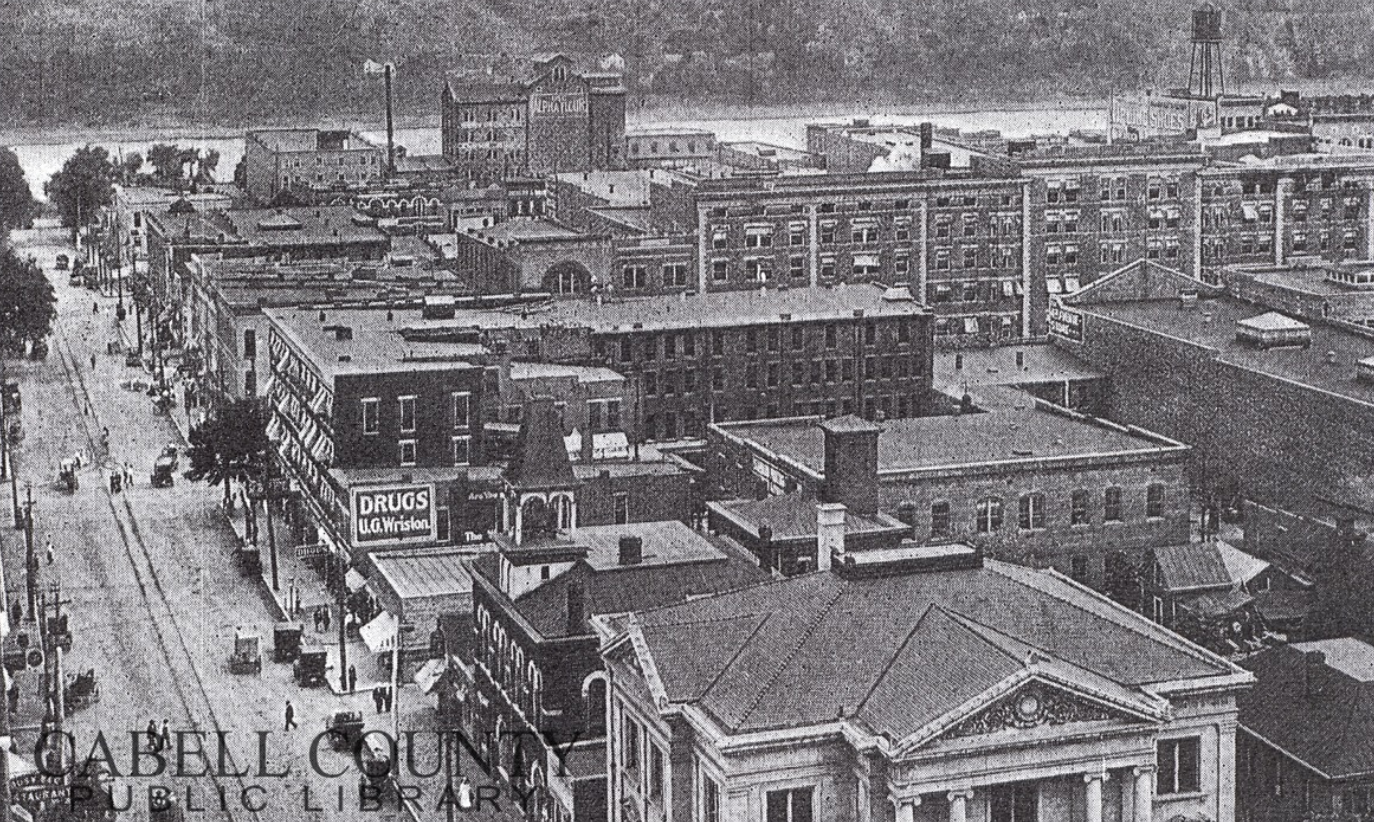 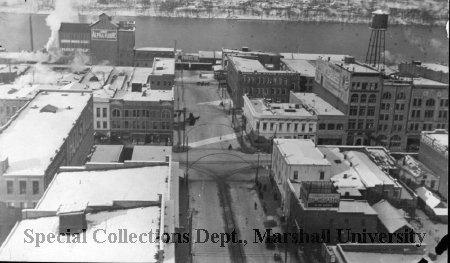 Sketch of the Gwinn Bros. Mill from the 1931 Sanborn fire maps

A building advertising Gwinn Bros. Mill during the 1937 flood 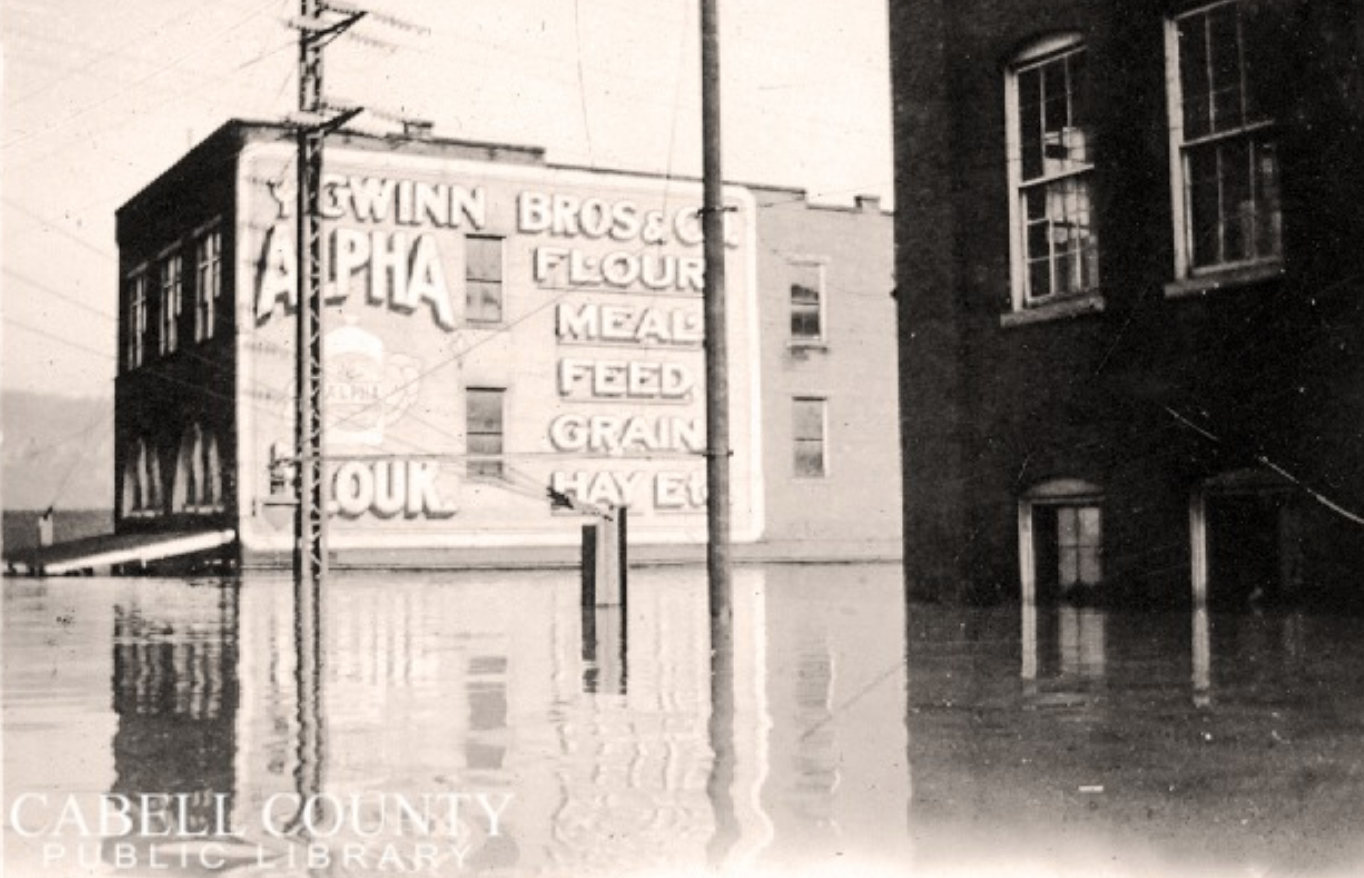 Looking down Second Avenue, with Gwinn Bros. Mill on the left, during the flood of 1937 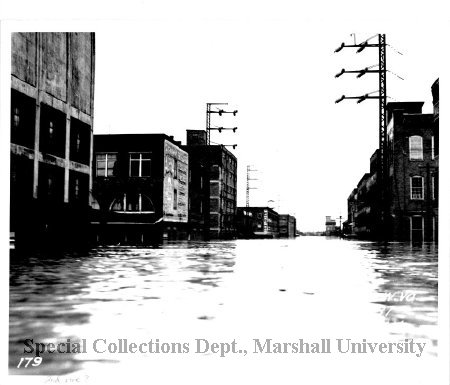 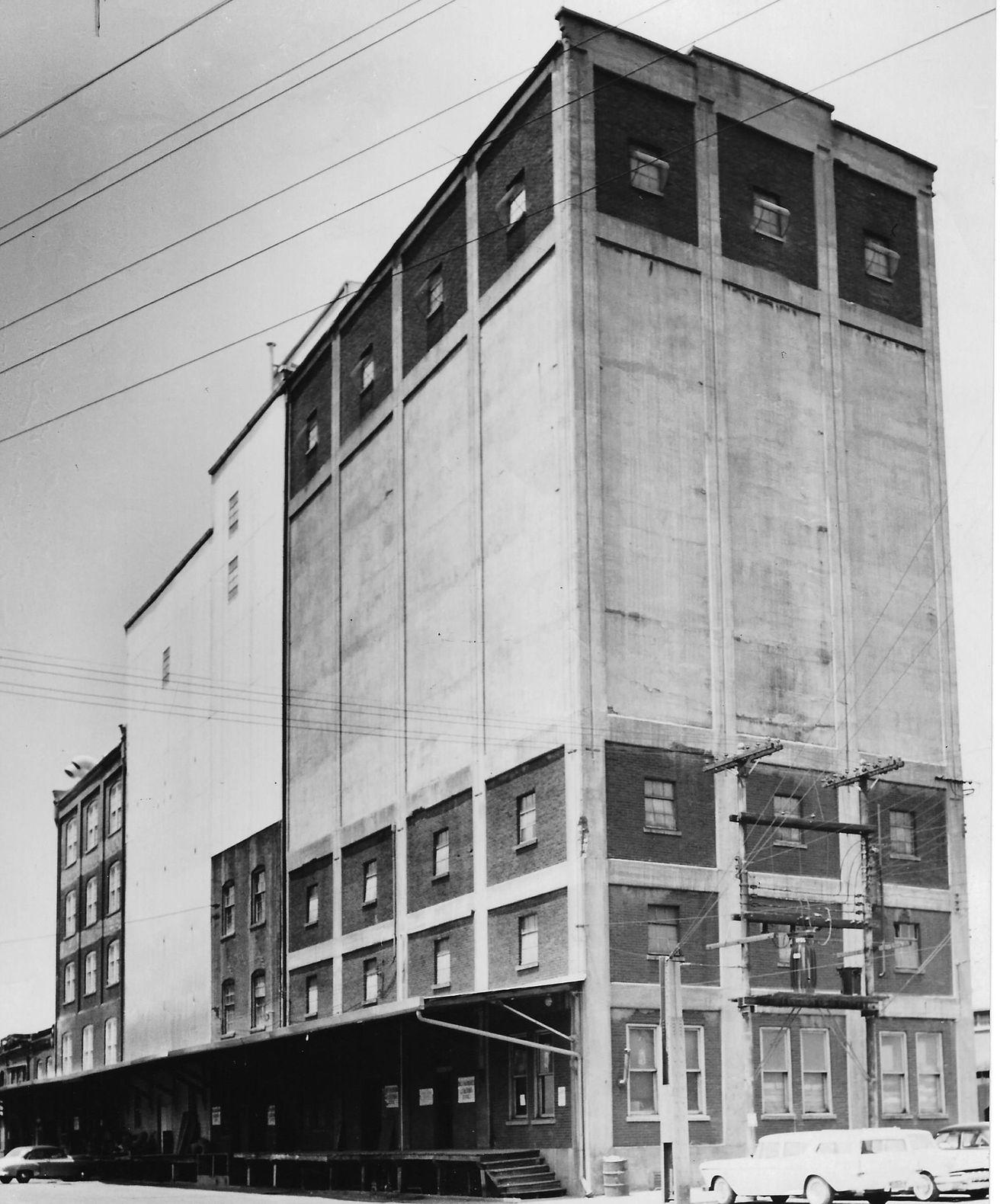 Aerial view of downtown Huntington, with Gwinn Bros Mill visible on the right, in 1960 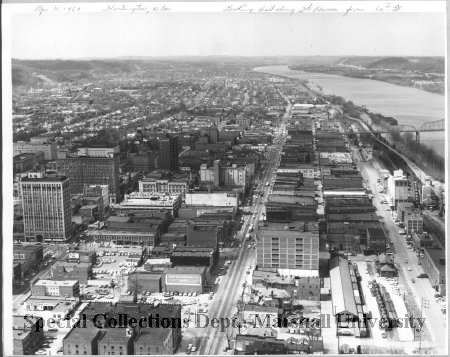 Aerial view of downtown Huntington, with the mill visible at the top left 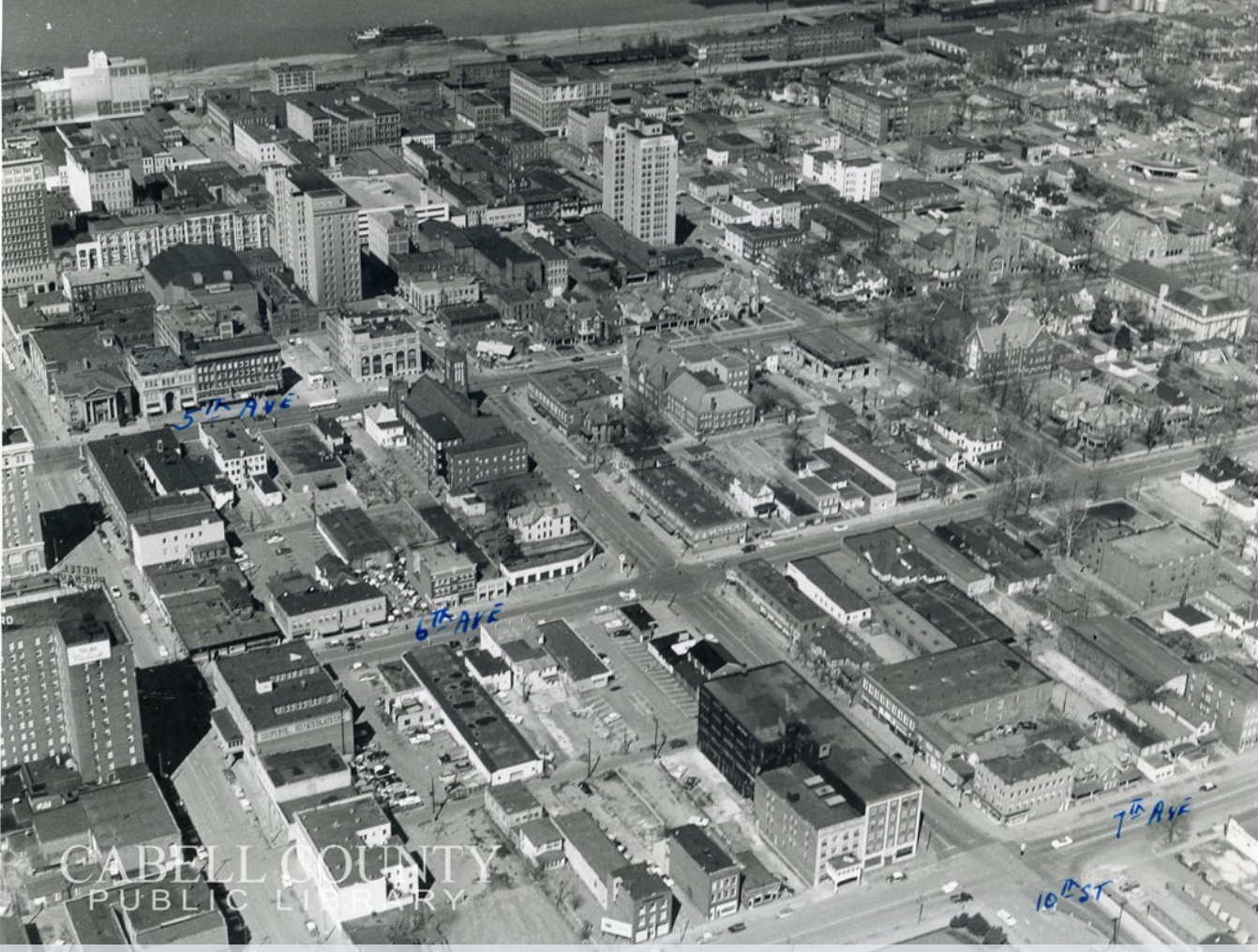 Aerial view of downtown Huntington, with the mill visible at the right 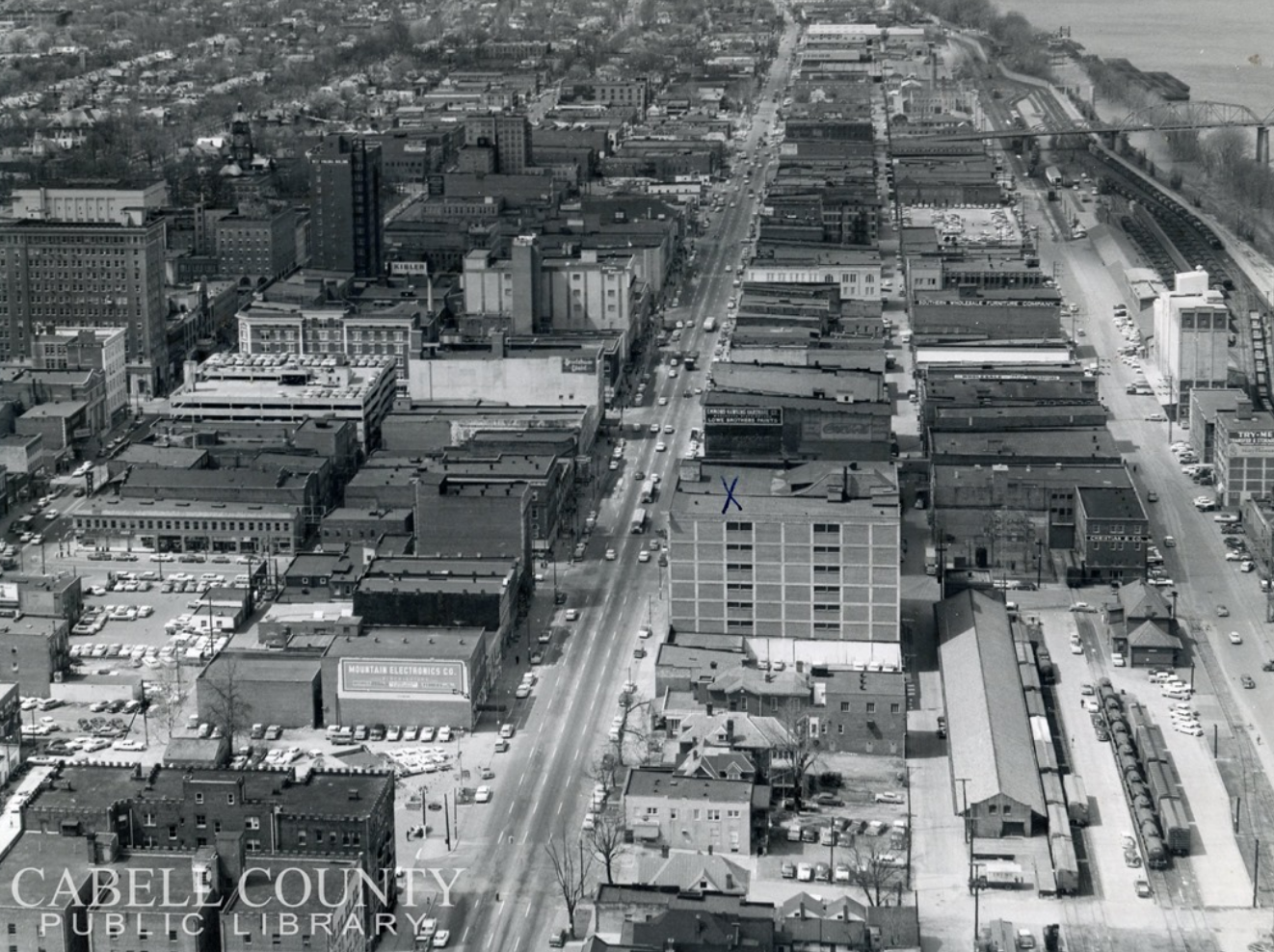 Aerial view of downtown Huntington, with the mill visible at the top 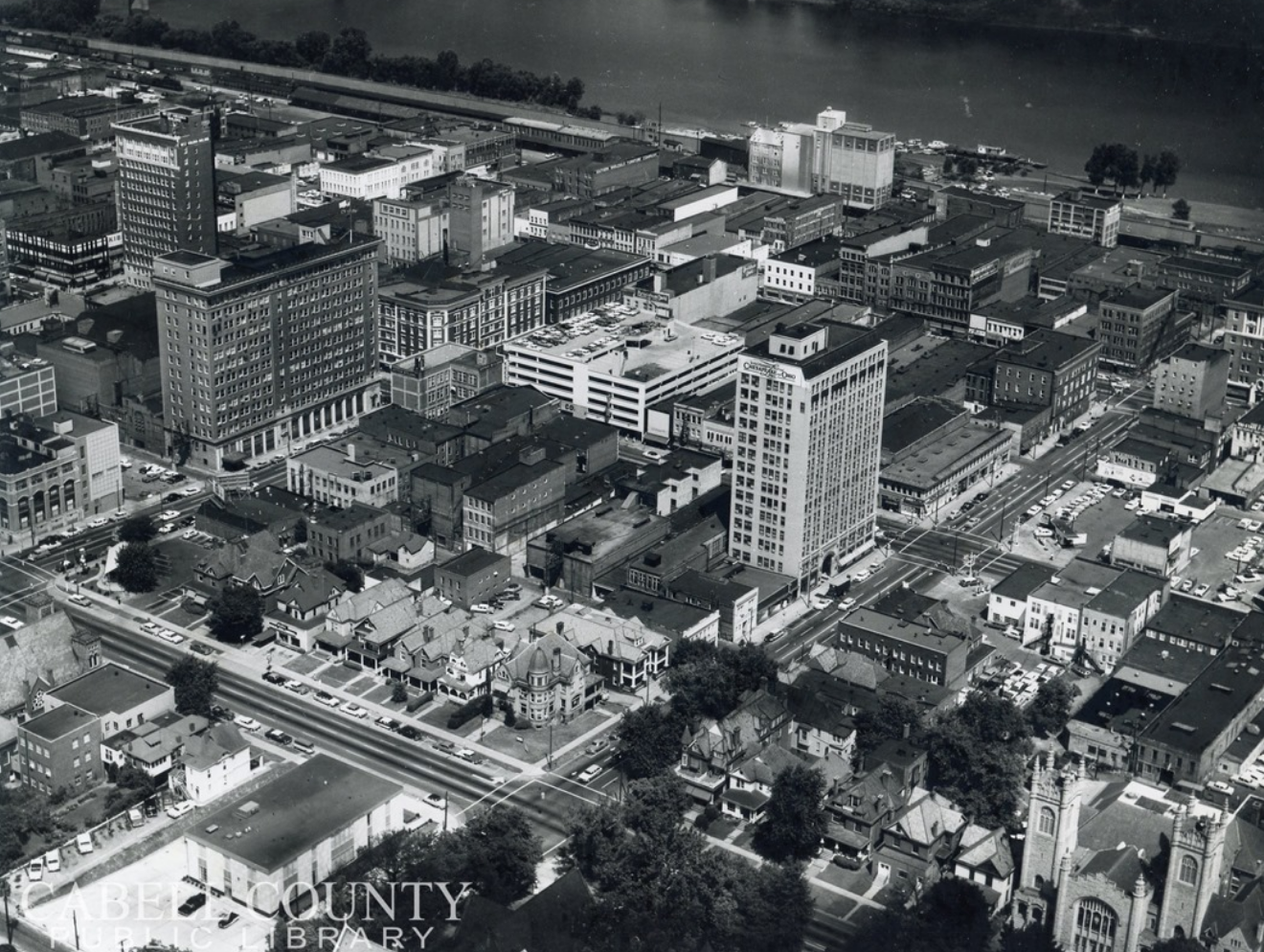 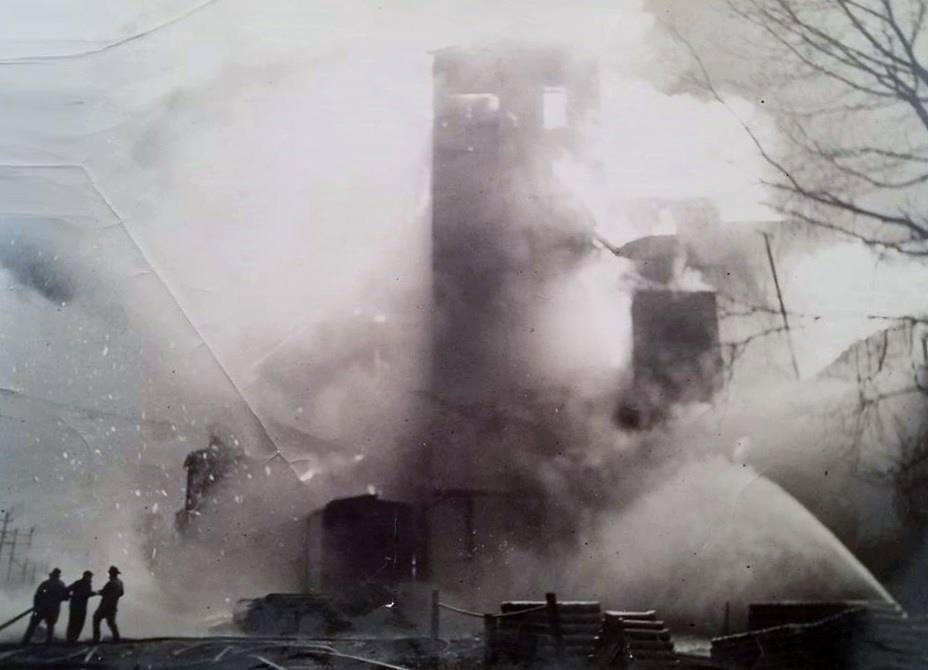 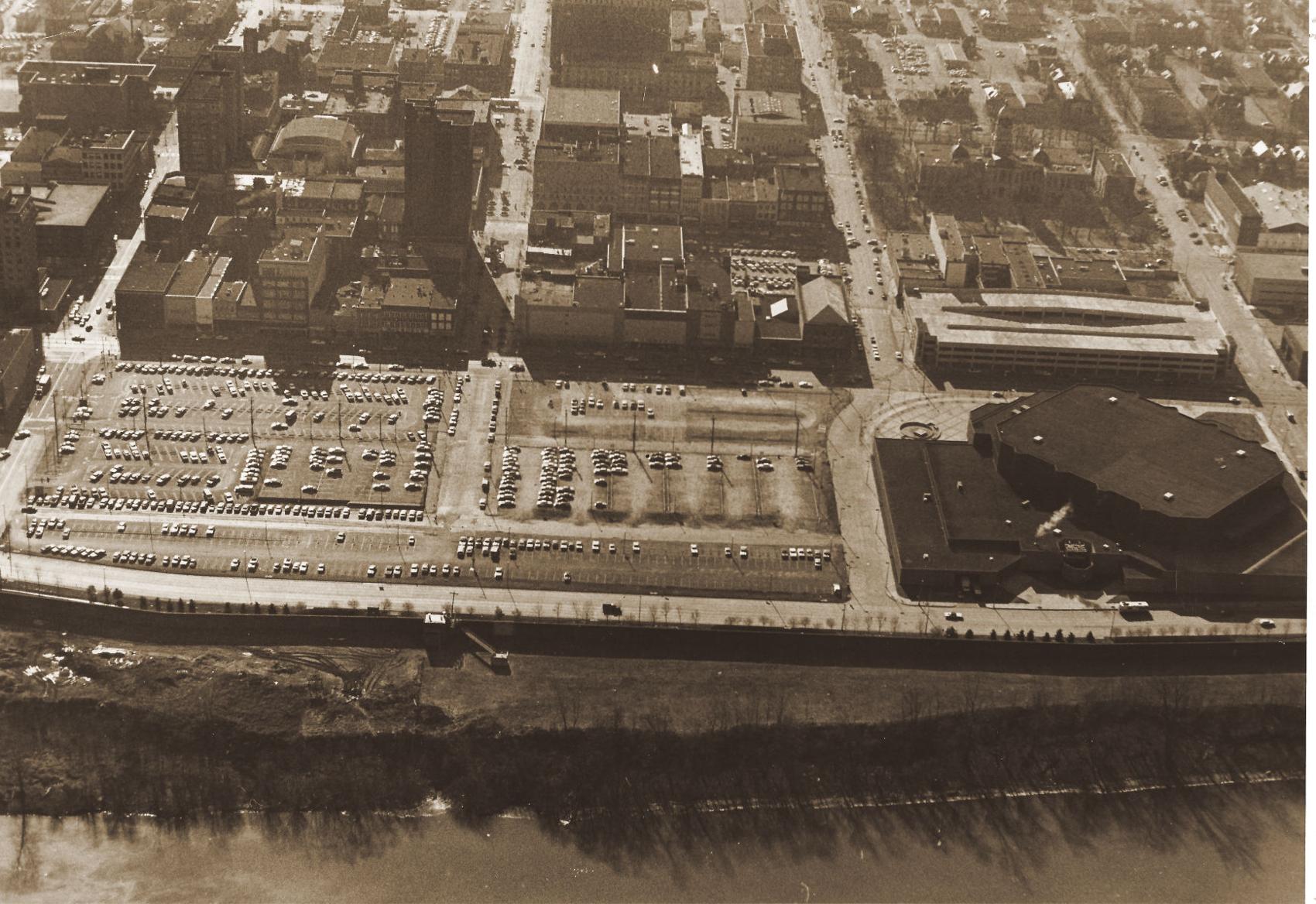 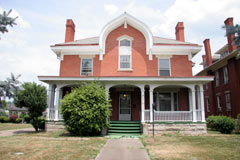 Members of the Gwinn family settled in Cabell County decades before the city of Huntington was established in 1871. The county’s location along the Ohio River made it a natural stop for settlers following the James River and Kanawha Turnpike as they headed to the western frontier. Irish immigrant John Gwinn, his wife Ruth, and their four children arrived in Cabell County around 1810. Although John Gwinn passed away shortly after the move, the family remained in the area and their children went on to raise families of their own. John’s son Andrew Gwinn, who was born around 1794, was the father of Henry Gwinn, who moved with his family to nearby Mason County around 1860. Henry Gwinn and his wife then had eight children: Othniel Edward, Walter W., Clarence Eugene, Mary Rachel, Minnie A., Van Henry, Martina, and D. Byrd.

Around 1883, Othniel Edward and Walter W. Gwinn opened a grist mill near their family’s general store in Glenwood, Mason County. The mill proved successful, and within a few years, the brothers were producing more flour than they were able to sell locally. They decided to sell the general store, dismantle their mill, and float it down the Ohio River to the foot of Tenth Street in downtown Huntington, where it was officially established as the Gwinn Brothers Milling Company in 1901. The company, which was also referred to as the Aldine Flour Mills, soon grew into a successful business with several buildings that stretched along Second Avenue between Ninth and Eleventh Streets. At its peak, the mill produced hundreds of barrels of flour and cornmeal and hundreds of tons of livestock feed each day. As the largest flour and feed mill in the state, Gwinn Brothers had a vast sales territory that covered southern and central West Virginia, southern Ohio, Kentucky, Virginia and even parts of North Carolina.

Over the years, the Gwinn Brothers Milling Co.’s facilities were rebuilt and expanded a number of times. Along with the mill and two grain elevators, the property also had a three-story office building, warehouse, and a garage building. The youngest of the Gwinn brothers, D. Byrd Gwinn, gradually took on a larger role within the company after completing his education. When Walter W Gwinn passed away in 1915, D. Byrd Gwinn took over as company president. In 1910, Gwinn commissioned Edwin Alger, one of Huntington’s most prominent architects at the time, to design him an elegant home at 1524 Fifth Avenue. The house, which remained in the family for many years, was later purchased by Marshall University and became the Marshall University Forensic Science Center’s Crime Scene House. After D.B. Gwinn passed away in January 1951, his son, James Anderson Gwinn, succeeded him as president of the Gwinn Brothers Milling Company. By that time, however, the business had been struggling for several years, as its export market had shrunk and its equipment had not been modernized. In addition, one of the facility’s feed mills was destroyed by fire in 1946, preventing the company from manufacturing animal feeds for the following year. On January 9, 1958, another fire broke out at the mill, destroying its grain elevator.

James A. Gwinn passed away in 1961. In April of the following year, the remaining members of the Gwinn family decided to sell their majority interests in the company to a wholesale grocery and feed mill company based in Milwaukee. However, the mill was shut down the following year after its new owner announced that it could not make a profit due to the existing competition. In 1964, Martha White Mills took over the operation of the Gwinn Brothers grain elevator and flour mill, as it expanded from its original location on the north side of the 1500 block of 2nd Avenue. In 1970, the mill was demolished in 1970 as part of Huntington’s downtown urban renewal project. A four-block, nine-acre site that included the former Gwinn Bros. facility was created with intentions to redevelop it as a business and recreation district called the Superblock, which ultimately failed to materialize. While various plans for the space were announced over the years, the Superblock sat as a parking lot for thirty years before Pullman Square was completed in 2004.