Located at the southwest corner of Third Avenue and Tenth Street, the Gideon Building was originally occupied by early Huntington merchant and civic leader Samuel Gideon. Born in Germany, Gideon came to America in 1856 and settled in Huntington in 1872, where he opened the city’s first clothing store. In 1915, Gideon hired Edwin Alger, one of the city's best-known architects, to build a new structure for his store. Following Gideon’s death in 1923, the family sold the store to the W.T. Grant Company, a five and dime store chain that occupied the location until the mid-1970s. In 1978, the Gideon Building became home to Amsbary’s, a clothing store founded in Huntington in 1926, which remained in business there until the late 1980s. During the early 1990s, the Gideon Building became the first historic downtown structure to be restored by the Touma family. Its exterior was restored to its original appearance and its interior was rebuilt to hold modern retail and office spaces. Today, the building houses Sprint Wireless and professional offices for Nelson Mullins Riley & Scarborough LLP, Offut Nord Burchett PLLC, and State Farm. 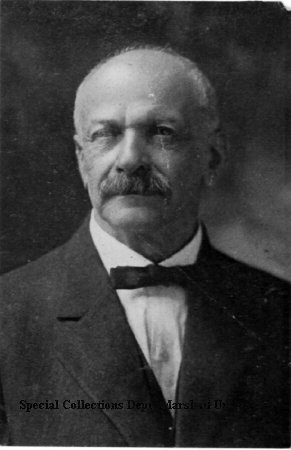 Ad for Gideon's Men's Clothing and Furniture Store, circa 1915 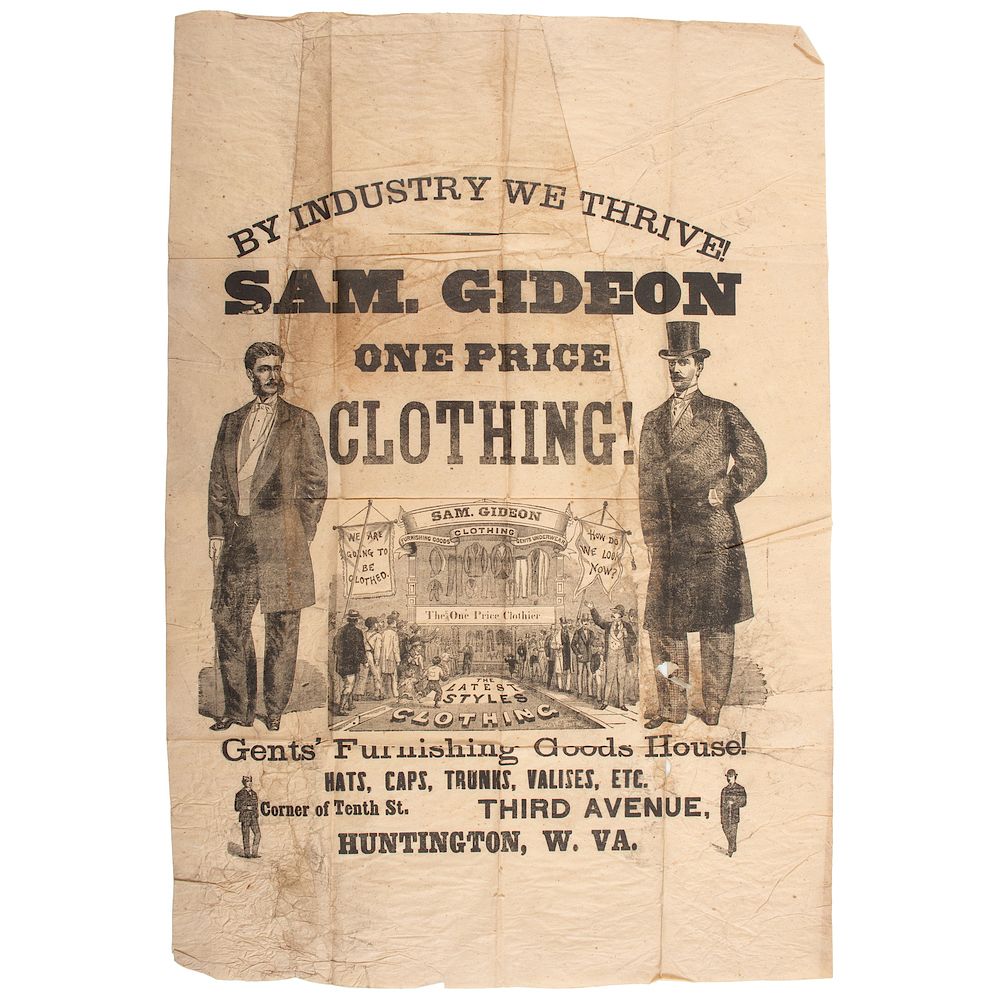 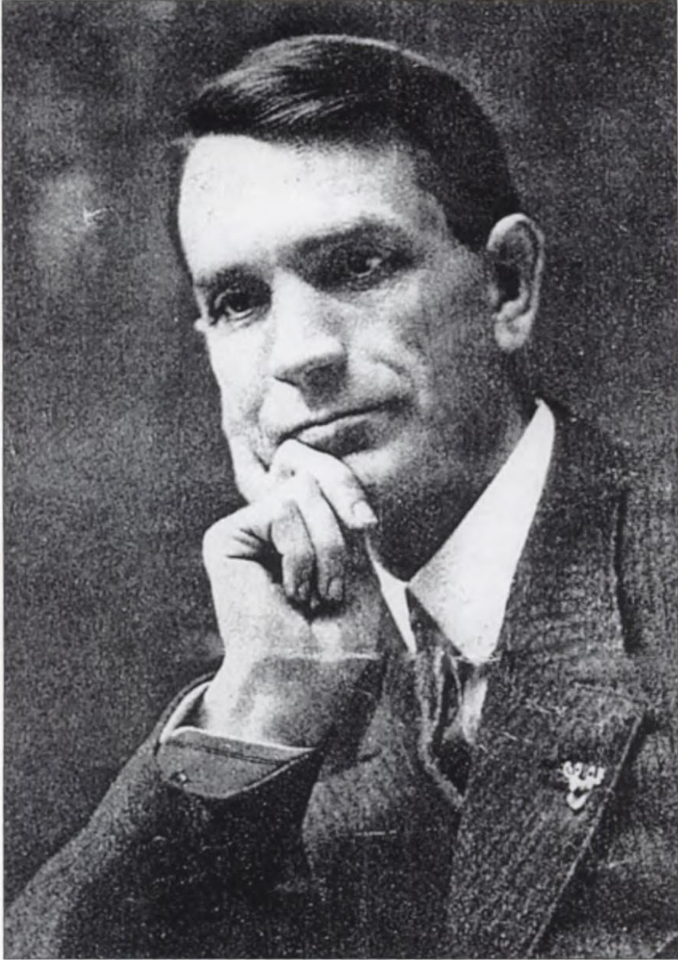 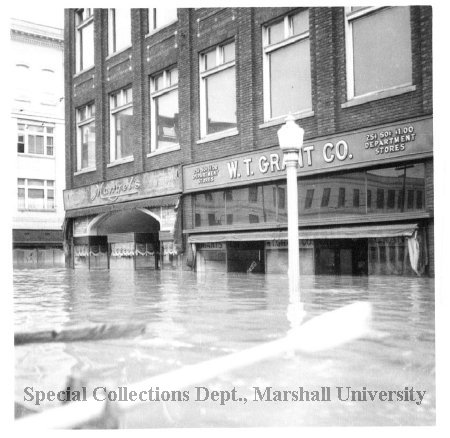 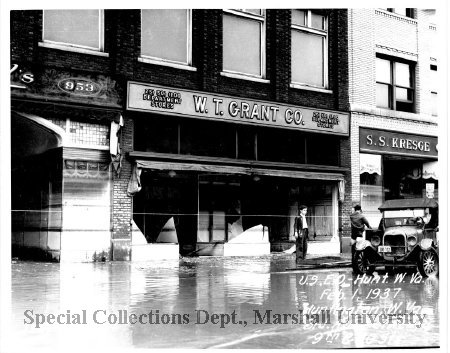 Grant's storefront during the 1937 flood 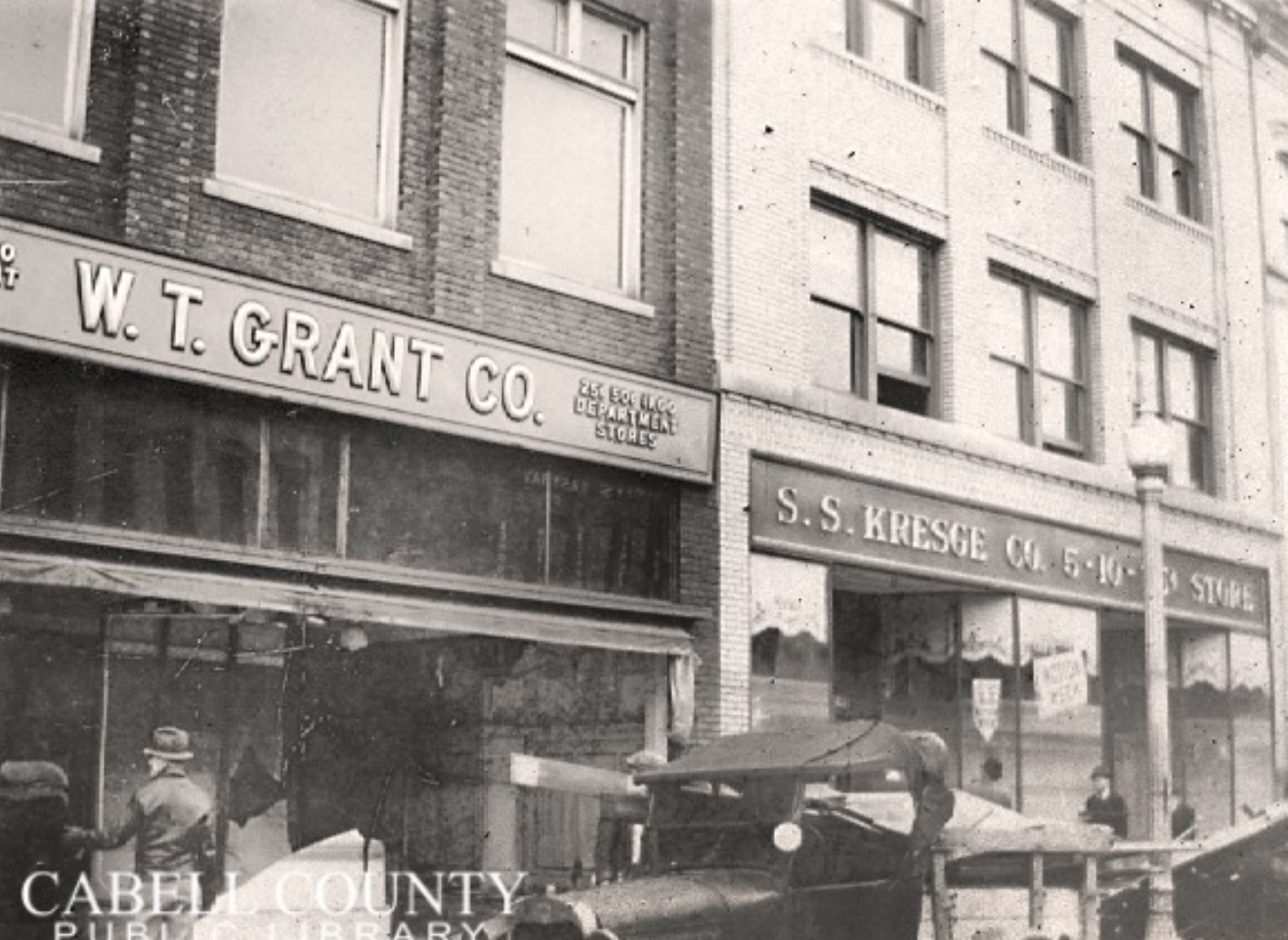 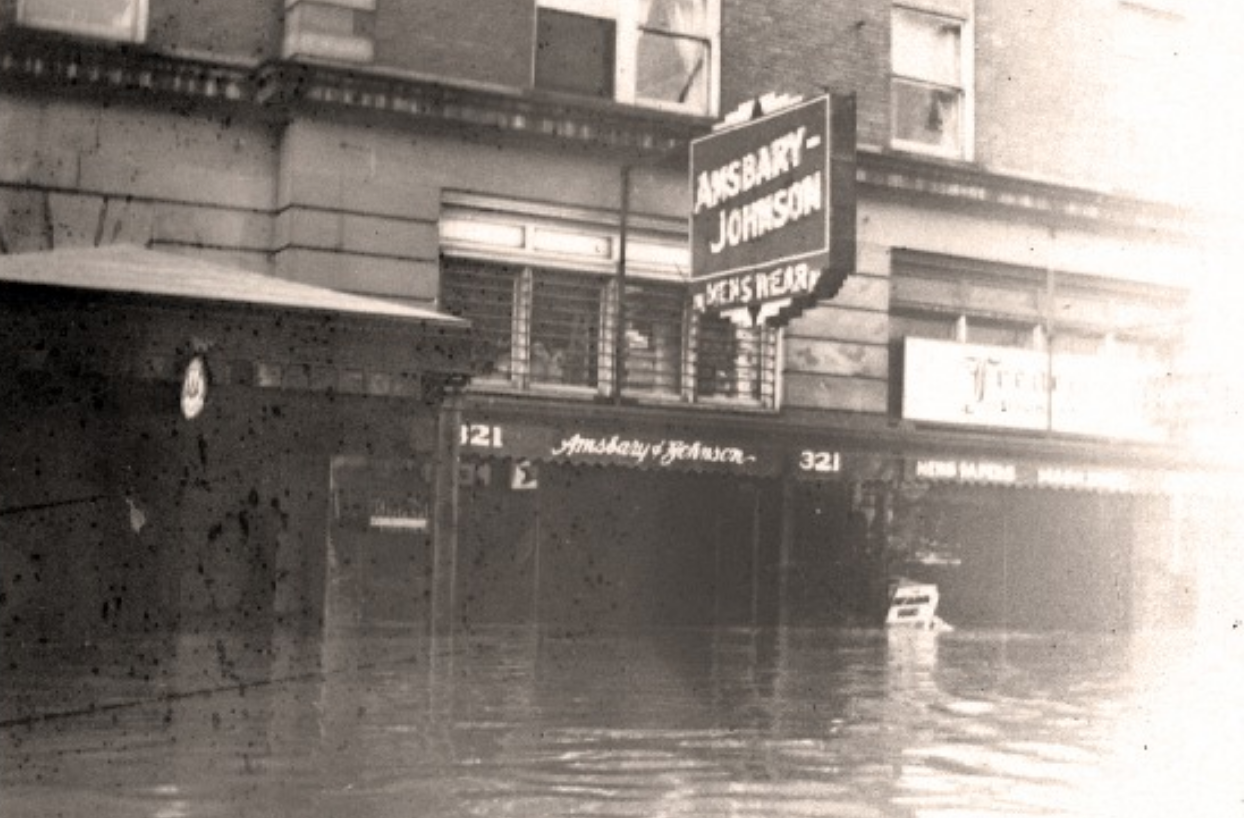 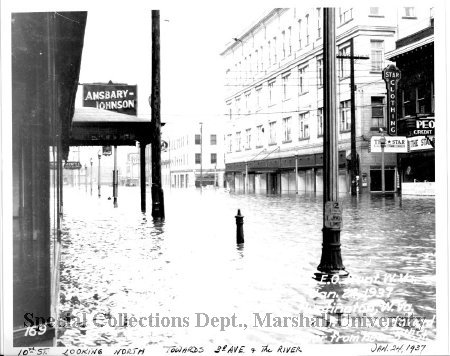 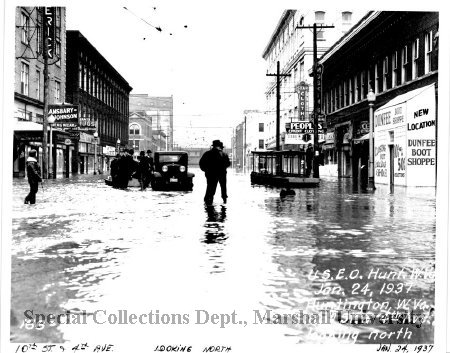 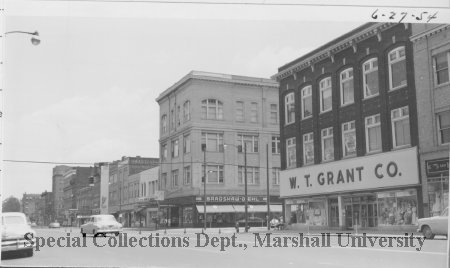 Amsbary's at the corner of Third Avenue and Tenth Street 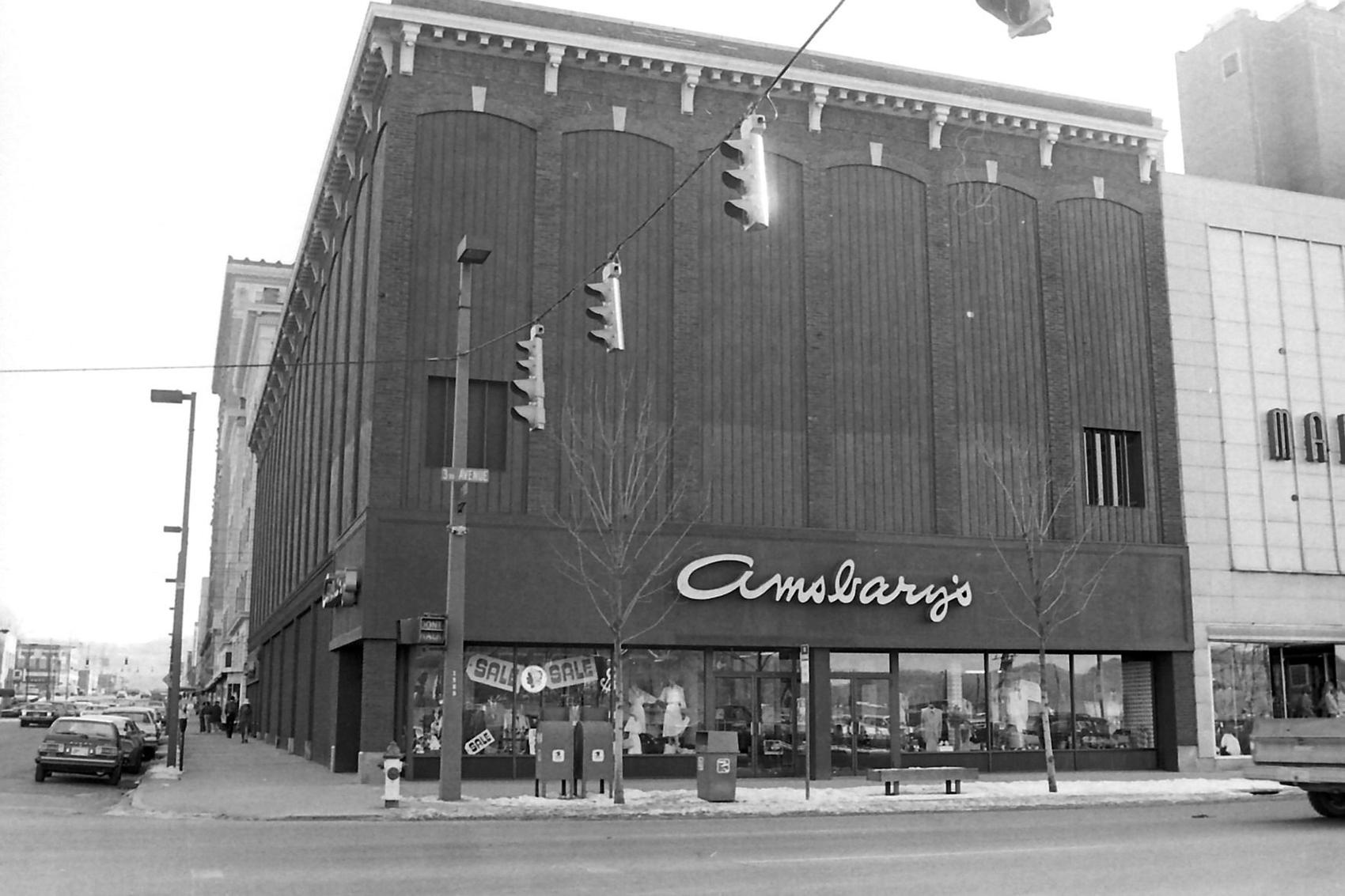 The Gideon Building in 2006 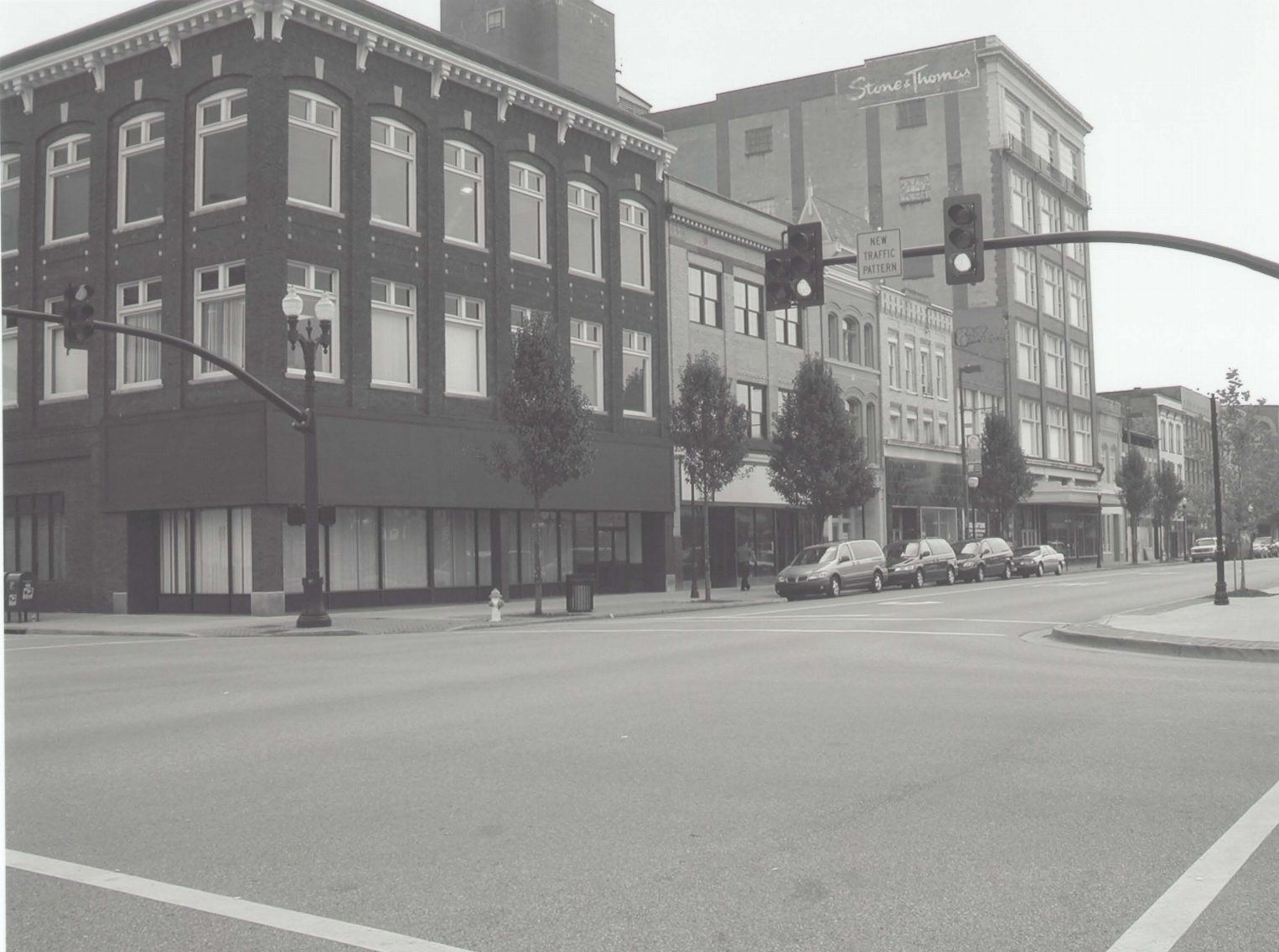 Plaque on the building's exterior 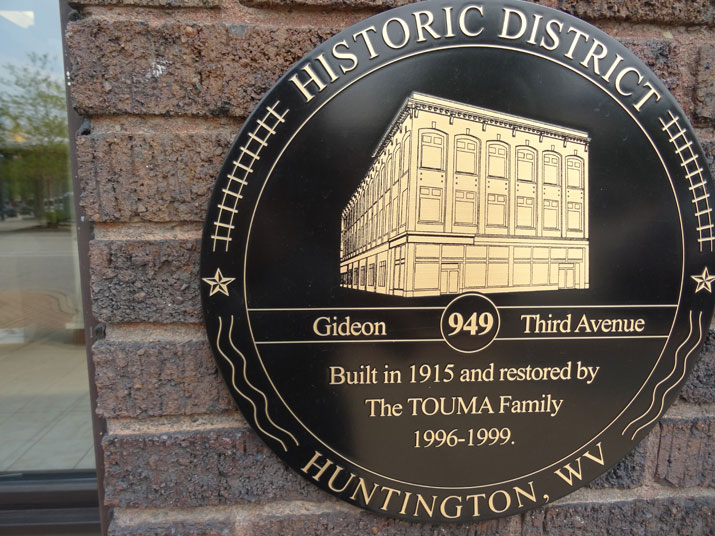 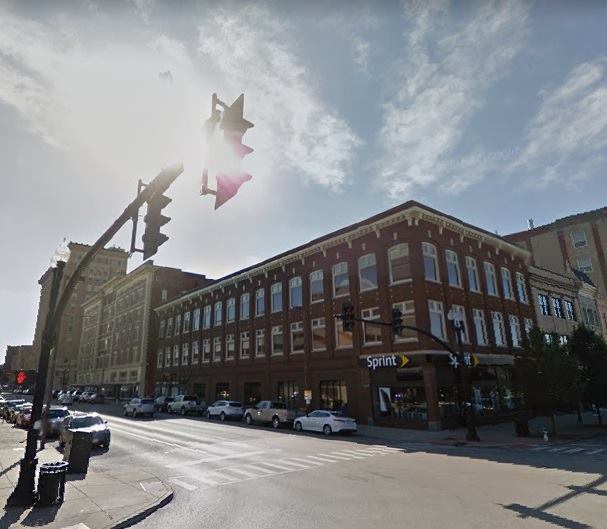 Born in Baden-Württemberg, Germany in 1836, Samuel Gideon came to the United States in 1856. During the Civil War, he served as a soldier in the Union army and was able to rise to the rank of captain. In 1865, Gideon married Dora Eppinger, with whom he moved to Cincinnati and later Manchester, Ohio. The Gideons settled in Huntington in 1872, where Sam Gideon opened a clothing store believed to have been the city’s first. The Gideons were also the first recorded members of the Jewish faith in Huntington, which had about four thousand residents at the time. The city’s Jewish community soon grew, with Gideon playing a major role in the establishment of Ohev Sholom Temple, where he served as president for thirty years. He was also involved in Huntington’s civic affairs, serving as a member of the city council and the board of education as well as the commander of the city’s Grand Army of the Republic branch. Gideon’s son, David, became his father’s partner in the clothing business, and later went on to become publisher of the Huntington Herald-Dispatch.

Around 1915, Gideon commissioned the construction of a new building to house his clothing business. He hired Edwin Alger, one of early Huntington’s best-known architects, to design the structure. Born in Mansfield, Ohio in 1870, Alger came to Huntington in 1901, where he partnered with James B. Stewart to design the city’s Carnegie Library in 1902 and the Frederick Hotel in 1905. Alger also designed the Vinson-Thompson Building, the city’s first skyscraper, in 1909 and the First Congregational Church in 1911, as well as many fine homes along Fifth Avenue. Alger designed the three-story brick Gideon Building in the popular Craftsman style, though it featured Commercial-style elements such as a flat roof and large storefront windows on the ground floor. Although the building provided an appealing new home for Gideon’s clothing store, it did not remain there for long, as the business was liquidated at the death of its founder in 1923.

Following Gideon’s death, the family sold their store to the W.T. Grant Company, a chain of mass-merchandise shops founded by William Thomas Grant. After establishing the first W. T. Grant Co. “25-cent store” in Lynn, Massachusetts in 1906, Grant went on to open over one thousand locations, including one in downtown Huntington. Huntington’s W.T. Grant store initially occupied one storefront within the Gideon Building, while Mangel’s, a women’s clothing store, occupied the adjacent space. Around 1950, however, Grant’s expanded to occupy the entire ground floor space of the building. Grant’s also covered many of the building’s original windows with giant wood panels in an attempt to give it a more modern-looking warehouse facade. For many years, Grant’s was one of several five and dime stores that lined downtown’s Third Avenue. Alongside others like Woolworth’s, McCrory’s, and H.L. Green’s, Grant’s offered downtown shoppers a wide range of low-cost goods. Grant’s occupied the Gideon Building until around 1976, when the company declared bankruptcy.

In 1978, the Amsbary & Johnson Clothier Store moved into the Gideon Building. The business was founded in 1926 when Loren “Jake” Amsbary and H.L. Johnson took over a men's retailer located in a small room off the lobby of the Hotel Frederick. While the business struggled at first, it began to prosper within a few years. Eventually, Amsbary and Johnson were able to relocate it to a storefront location at 321 Tenth Street. When Johnson retired during the early 1940s, Amsbary kept Johnson's name on the store, though it was more often referred to simply as Amsbary’s. The success of Amsbary’s “3-2-1 shop” allowed it to expand its inventory and lease two adjacent storerooms. Again short on space by the late 1970s, the store relocated half a block north to the Gideon Building, where it remained for another decade. After Jake Amsbary passed away in 1986, his sons operated the store until it shut down a few years later.

In 1992, the Gideon Building was purchased by Dr. Joseph Touma, who began the process of restoring the historic structure. Touma removed the wood panels to return the exterior of the building to its original appearance, and gutted and rebuilt the inside to house modern retail and office spaces. Within a year of its restoration, the Gideon Building was fully occupied. The structure was the first of many historic buildings in downtown Huntington to have been purchased and restored by Touma Real Estate Holdings. When Dr. Touma came to Huntington in 1971, he immediately admired the city’s architectural heritage, but was disappointed to see how many buildings had been left in disrepair for decades. Believing that Huntington’s business district could be revitalized, he began restoring historic structures like the Gideon Building and finding them new tenants. Now, Touma Real Estate Holdings owns and manages ten completely restored historical buildings. Located across from Pullman Square and the DoubleTree Hotel, the Gideon Building currently houses a Sprint Wireless store along with professional offices for Nelson Mullins Riley & Scarborough LLP, Offut Nord Burchett PLLC, and State Farm.