The Lyric Theater during the flood of 1913 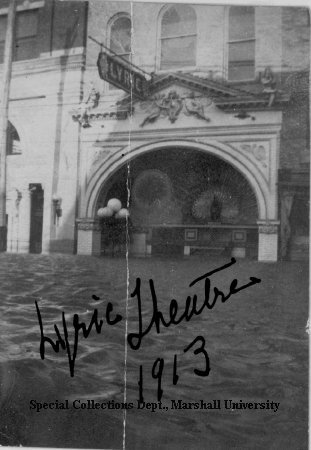 The Lyric Theater during the 1913 flood 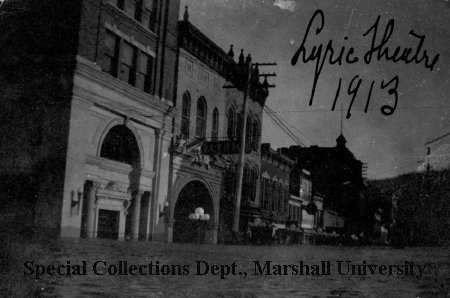 The entrance to the Lyric Theater 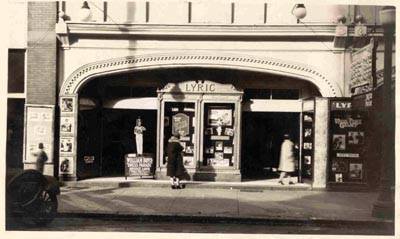 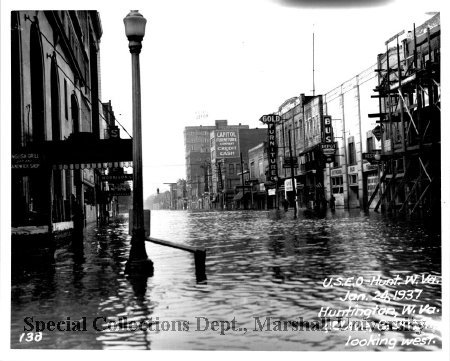 Fourth Avenue looking east, with the bus depot visible at left, behind the Gold Furniture sign, circa 1945 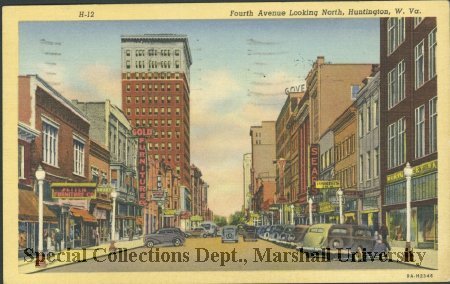 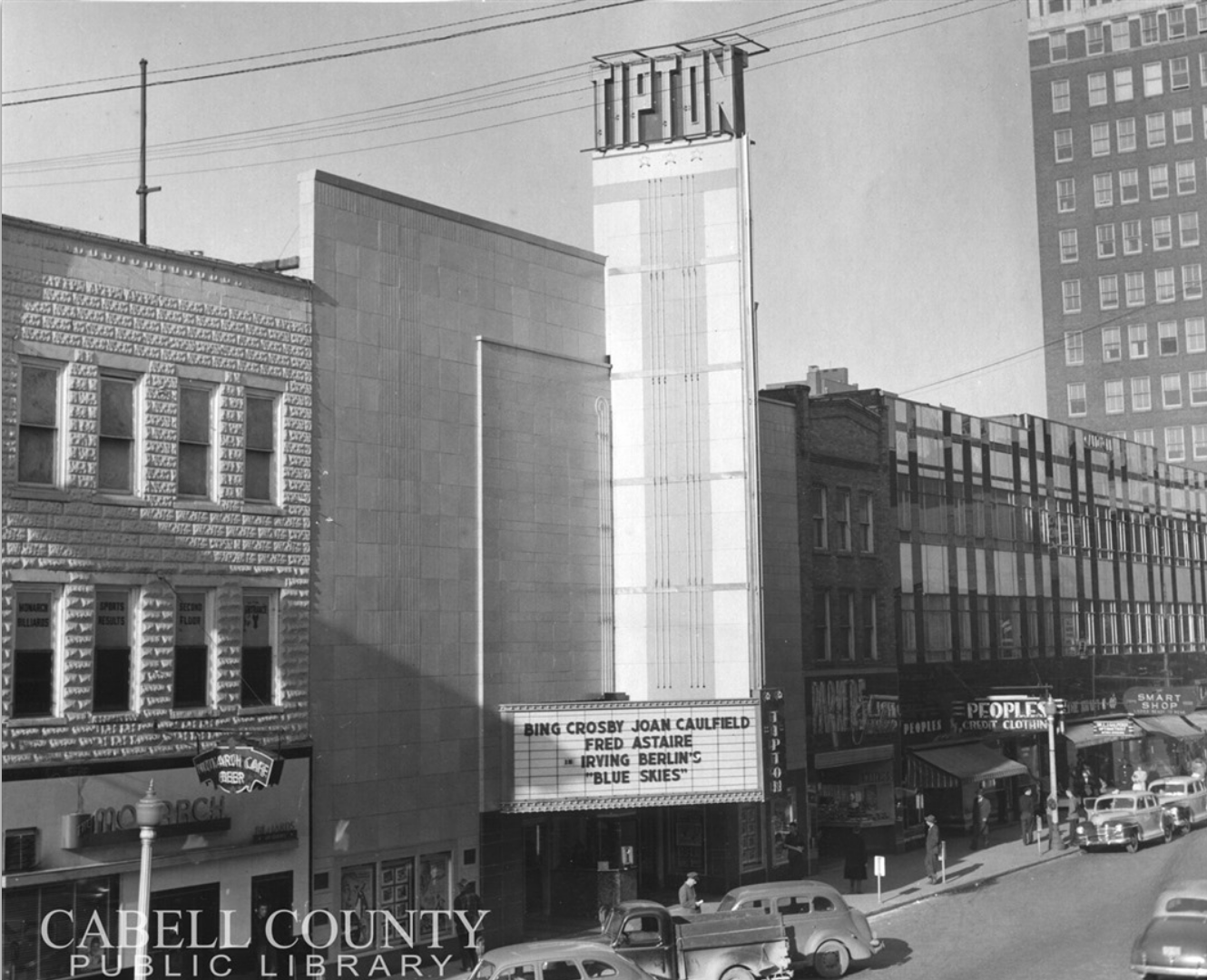 The Tipton Theater on its opening night, March 1947 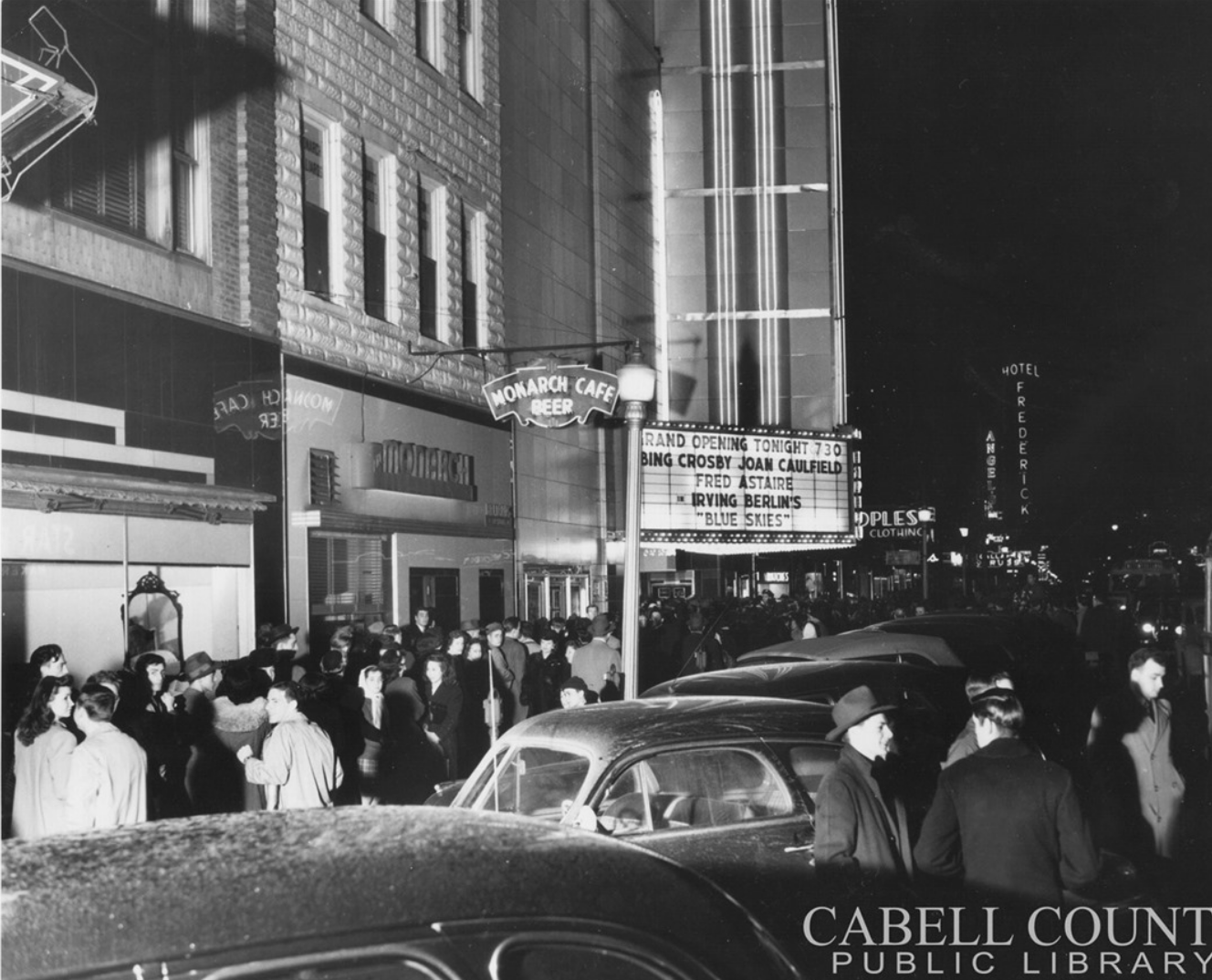 The crowd gathered for the Tipton's opening night 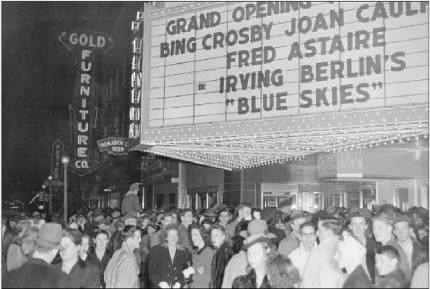 Interior of the brand-new Tipton Theater 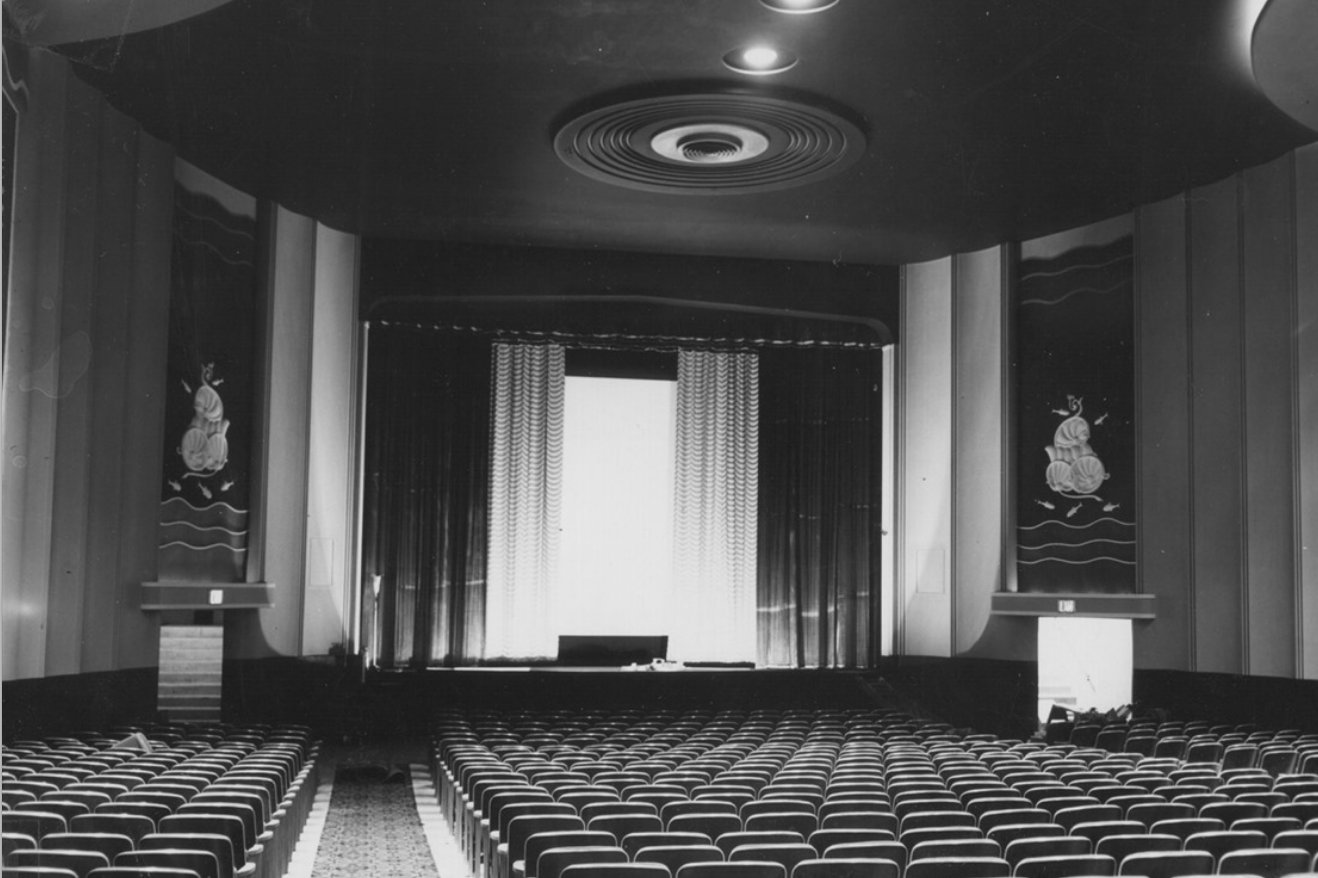 Auditorium of the Tipton Theater 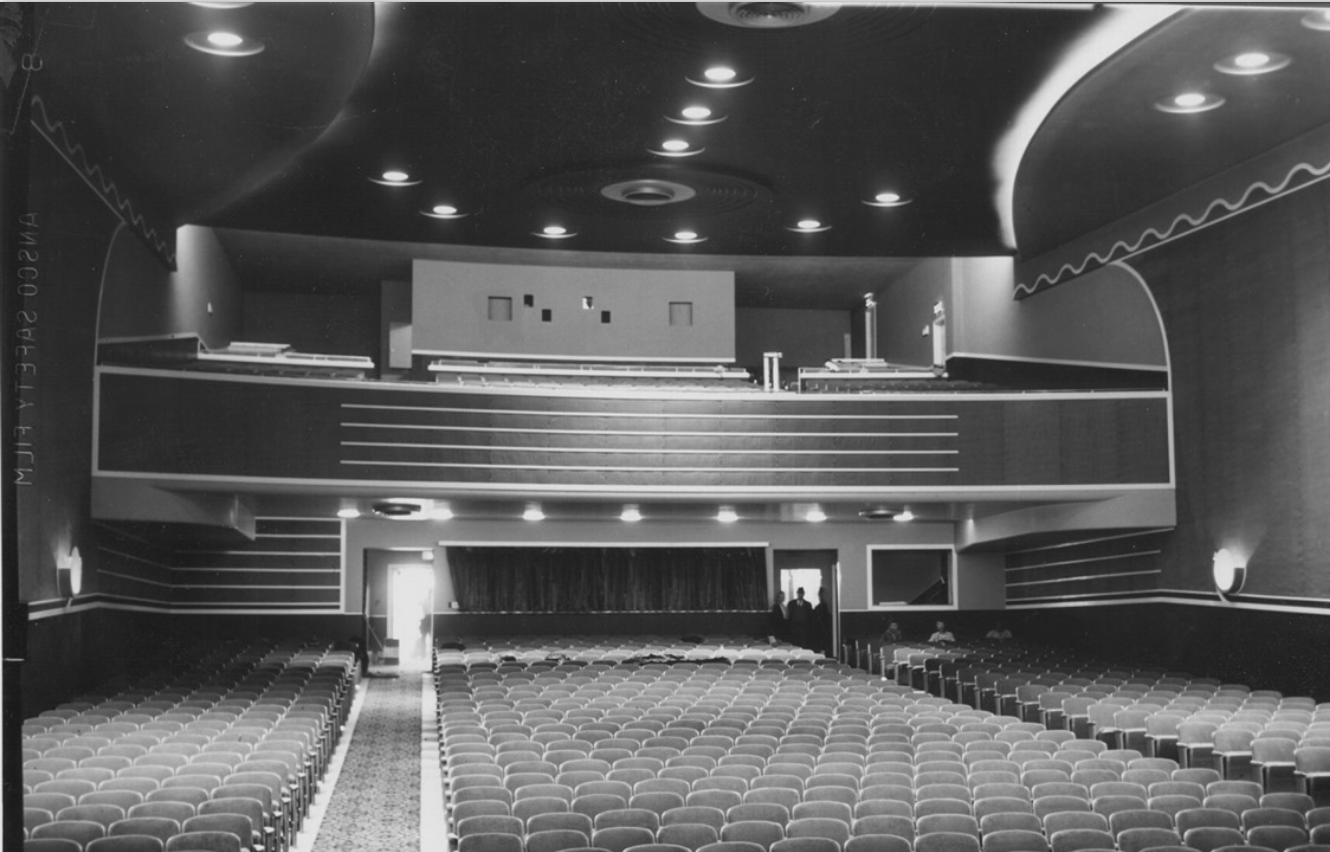 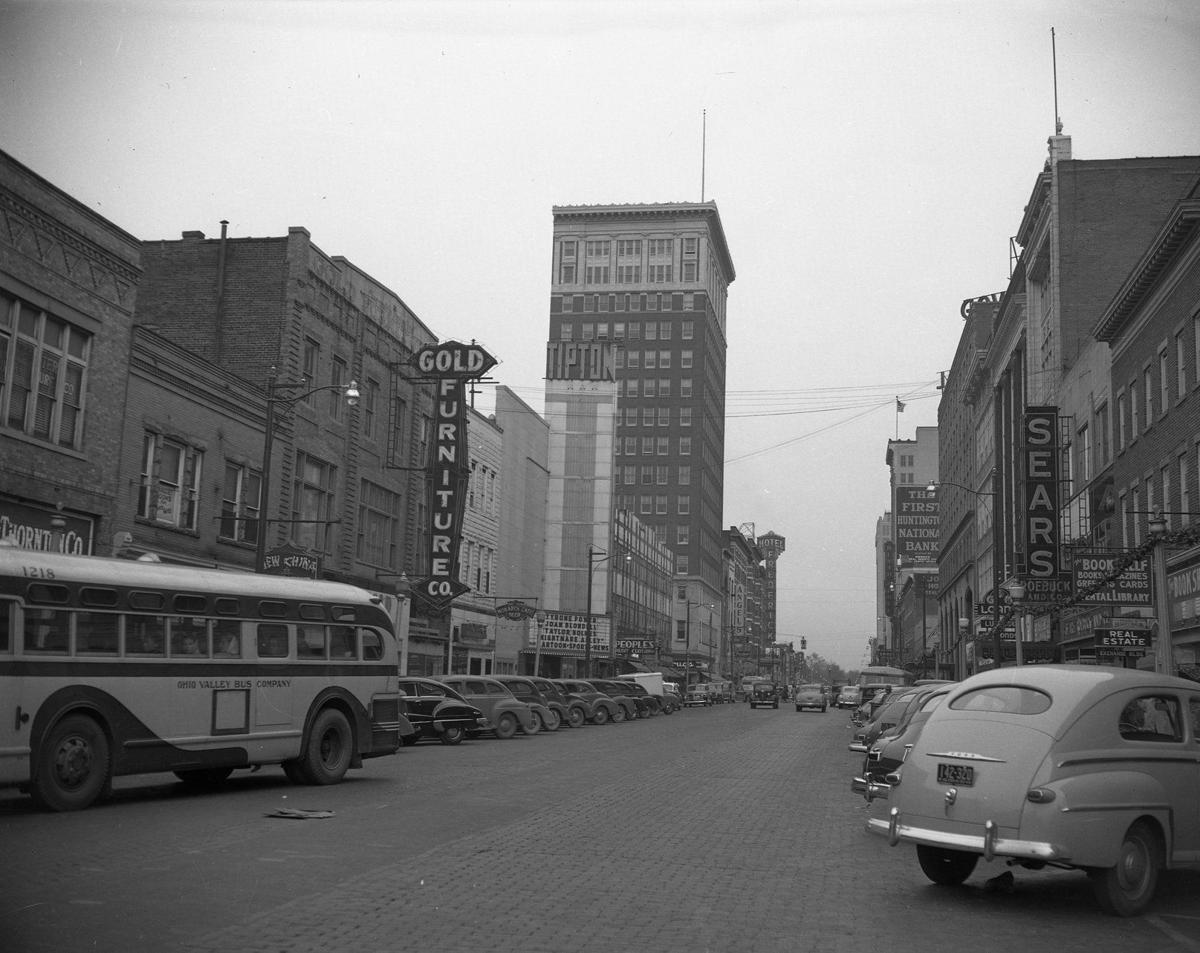 The Tipton's sign lit up at night, on left 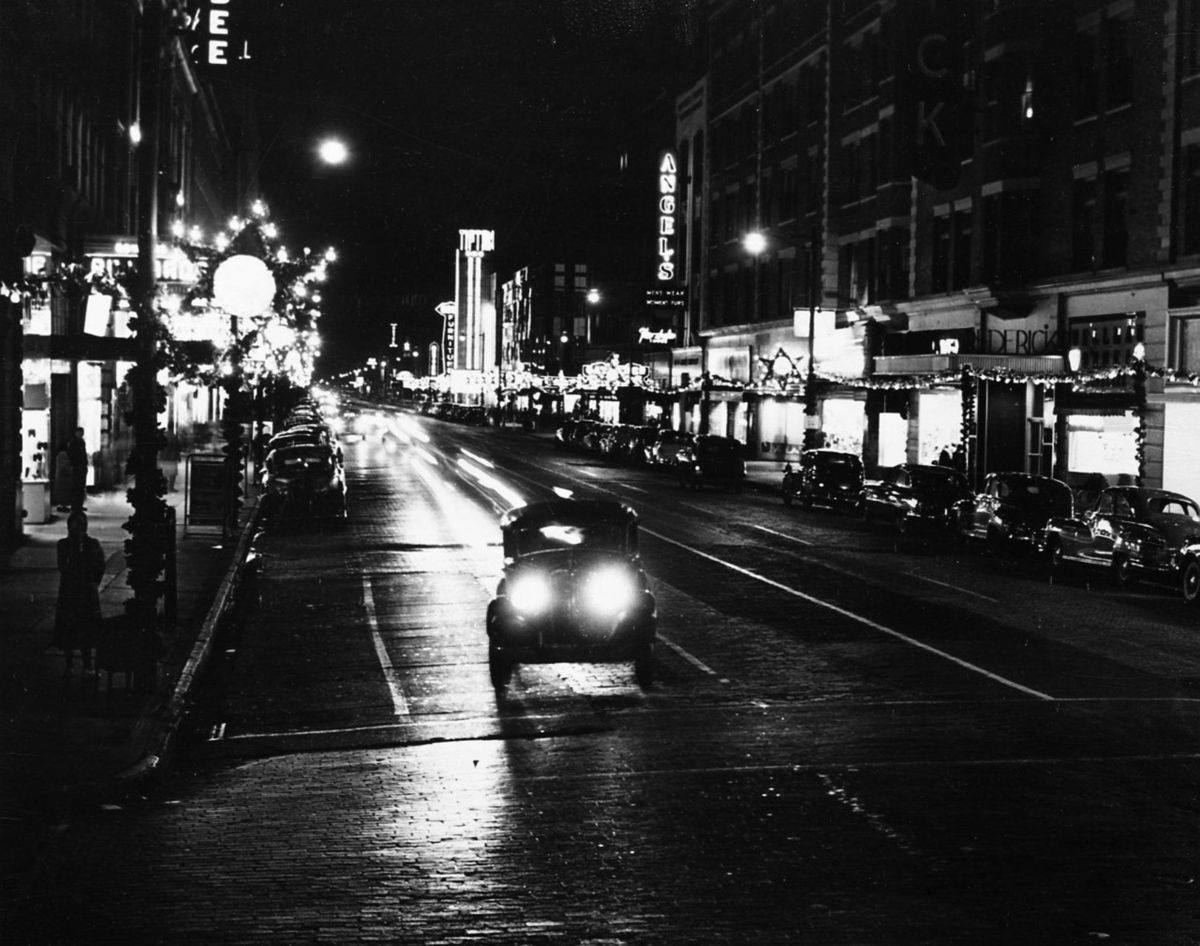 Looking east on 4th Avenue, the white Tipton sign is visible on the left 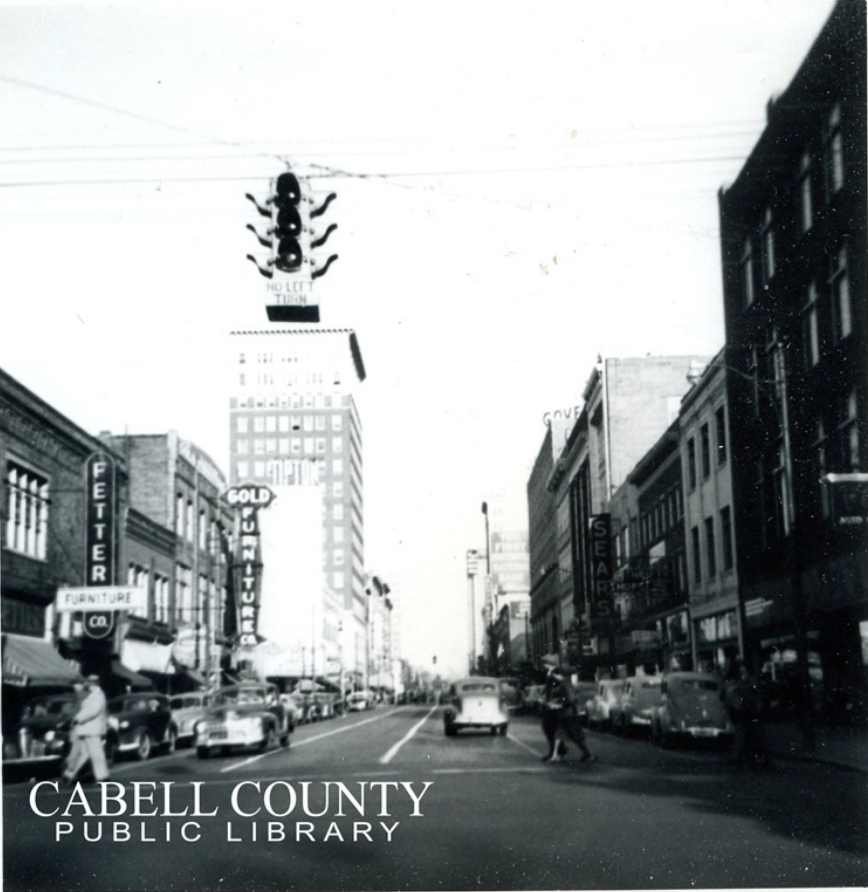 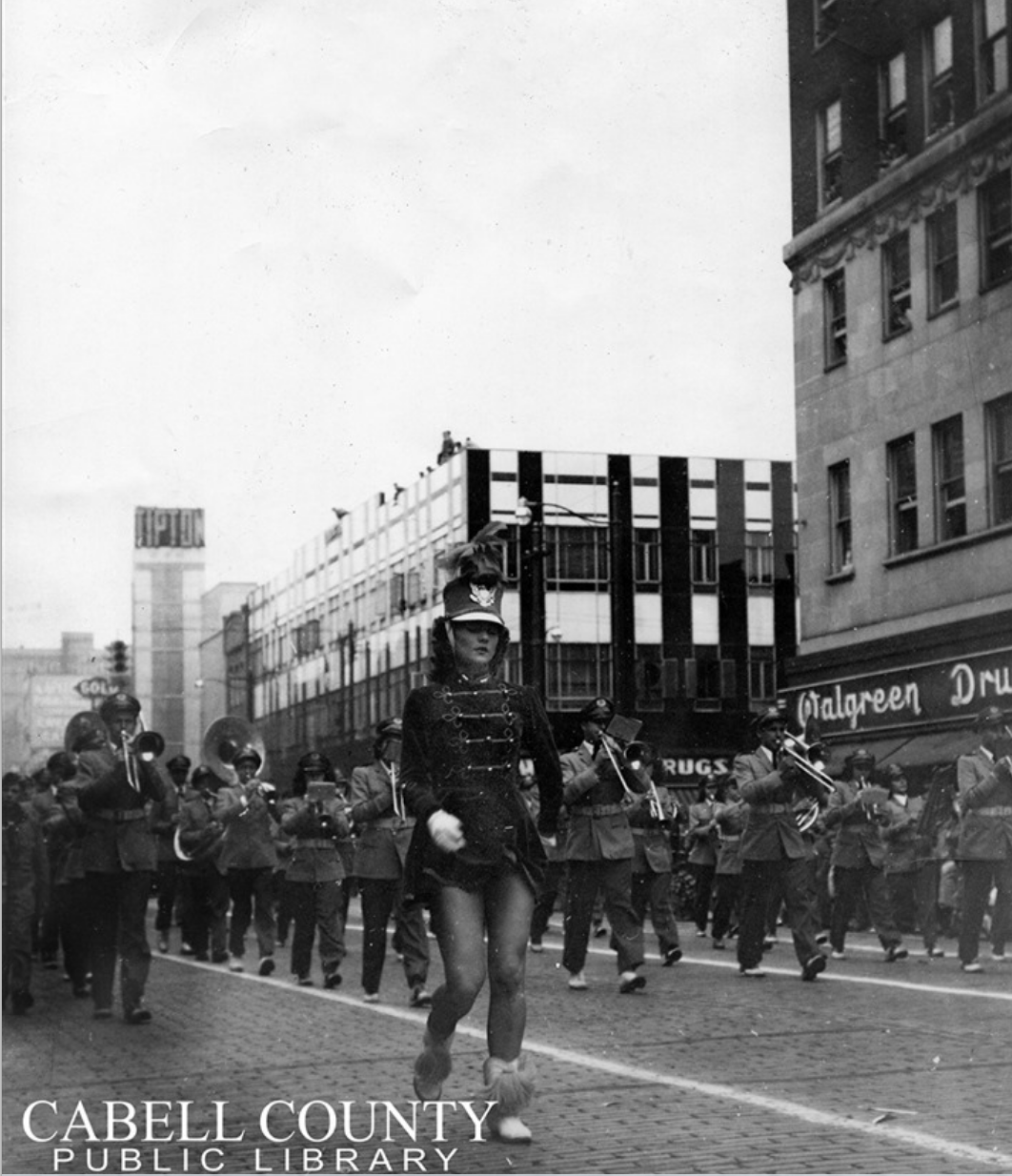 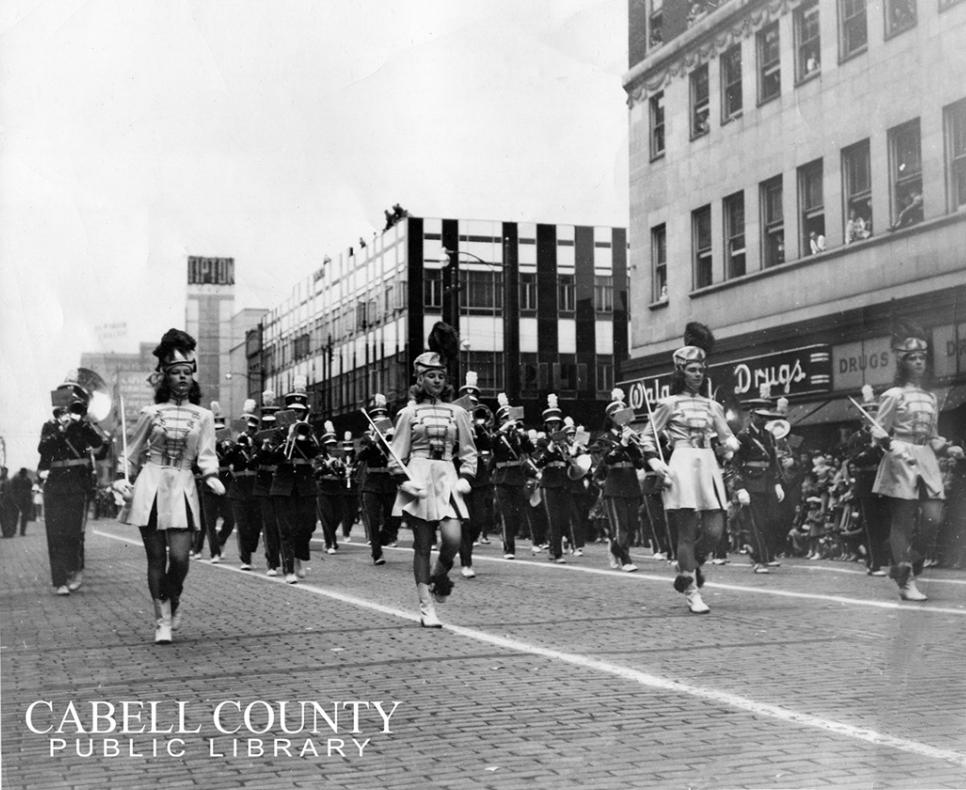 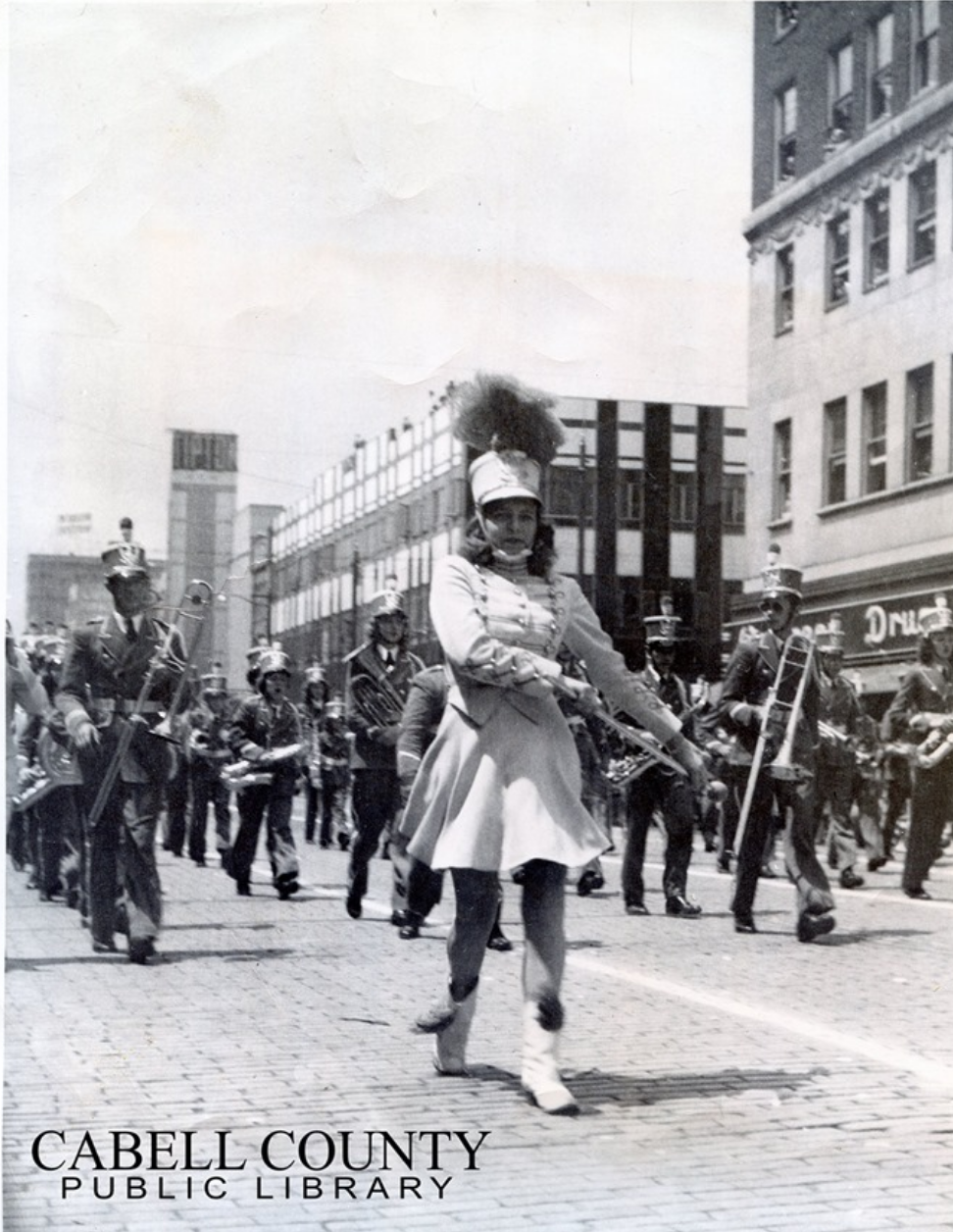 The Tipton sign in the background during a band festival, 1950 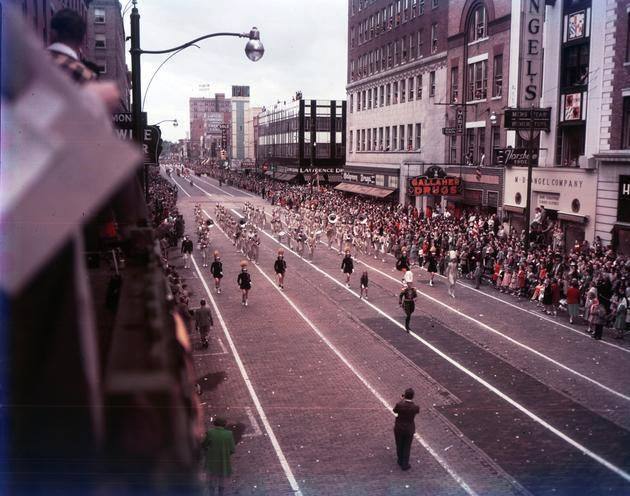 The theater after the fire, October 1951 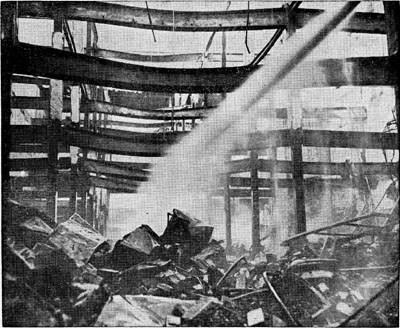 In the decades before the Tipton was built, a variety of businesses occupied the location of the future theater as Huntington’s downtown developed. The site was once home to another theater, the Lyric Theater, for which relatively little information is available. The Lyric was open as early as 1913, as photographs from the flood of that year show, until the late 1920s or early 1930s. Like many of the older theaters in Huntington, the Lyric may have begun as a vaudeville house that later came to show a mix of live performances and films. After the Lyric Theater closed, the building briefly became a bus station. In 1938, the United Bus Terminal had four bus companies operating from this location: Atlantic and Southeastern Greyhound Lines, Cackley R.M. Bus Line, and Logan Williamson Bus Company. In the late 1940s, the bus depot relocated to the Baltimore & Ohio Railroad station, now Heritage Station, before the current Greyhound station was constructed in 1953.

Construction of the Tipton Theater began in 1946. It was built by brothers Abe and Saul Hyman, who founded the Greater Huntington Theater Corporation. The Hyman family owned several of the theaters in downtown Huntington, including the Keith Albee, the Orpheum, and the State. They named the Tipton Theater in honor of Cecil Tipton, a long-time business associate of the Hymans who had recently passed away. The new theater was an impressive sight to behold, with its massive white stone facade interrupted in the center by an 80-foot tower bearing the theater’s name across the top. Compared to some of the other theaters along 4th Avenue, which were designed to appear ornate and luxurious, the Tipton had a more modern appearance. With its sleek white exterior broken only by the rectangular tower, the Tipton reflected the Art Deco architectural style that had become popular for theaters at the time.

The Tipton Theater opened on the evening of March 15, 1947 with a showing of “Blue Skies,” a musical comedy starring Bing Crosby, Fred Astaire, and Joan Caulfield. A large crowd was drawn to the new theater, whose large auditorium could seat over one thousand audience members in its orchestra and balcony levels. Even after the excitement of its opening night, the Tipton quickly proved to be a success among Huntington’s moviegoers, who were drawn to the theater’s modern and spacious facilities. While the other theaters along 4th Avenue remained in business, the majority had already been open for at least twenty years by the time the Tipton was built: the Orpheum, for instance, had opened in 1916, and the Keith Albee, Palace, and State Theaters were all constructed during the 1920s.

The Tipton’s success was cut short, however, when a fire broke out at the J.C. Penney store behind the theater at 4:30 A.M. on October 21, 1951. The department store was gutted by the fire, leaving only its framework behind. The fire quickly spread to the Tipton, as flames burned the alley wall behind the building and showered the theater’s roof with sparks. The Tipton’s roof eventually collapsed into the theater’s auditorium, setting it on fire. Two and a half hours after the first alarm had sounded, and after tons of water had been poured into the theater, firefighters finally brought the blaze under control. Like Penney's, the Tipton was almost completely destroyed, and the theater was never repaired or reopened. Following the fire, the building came under new ownership and a parking facility was opened in its place. Today, the site of the short-lived theater is home to Medical Claims Assistance, a medical billing service.