Item 217 of 270
This is a contributing entry for Discover U.S. 60: The Midland Trail and only appears as part of that tour.Learn More.

In 2015, Artisans Express was a collaborative public art initiative which featured 42 fiberglass train models on display throughout various parts of the streets of downtown Huntington, West Virginia. Locations for the displays range throughout Fourth and Third Avenues, as well as 10th Street to 7th Street. The art project was organized as a fundraiser that would benefit the Hoop’s Family and Children’s Hospital. The initial goal of the fundraiser was $150,000, but this amount almost doubled by the end of the auction. Today, some trains remain on the streets of downtown Huntington in their original locations and are likely to stay until or beyond the next fundraiser which is planned for 2017. However, other trains have been relocated as per the wish of their new owners; some are on display in other locations/businesses throughout Huntington, WV.

Designed by Phil Stanley, "Rolling Thunder" is a tribute to the Marshall University plane crash of 1970. (Photo courtesy of Artisans Express Facebook page) 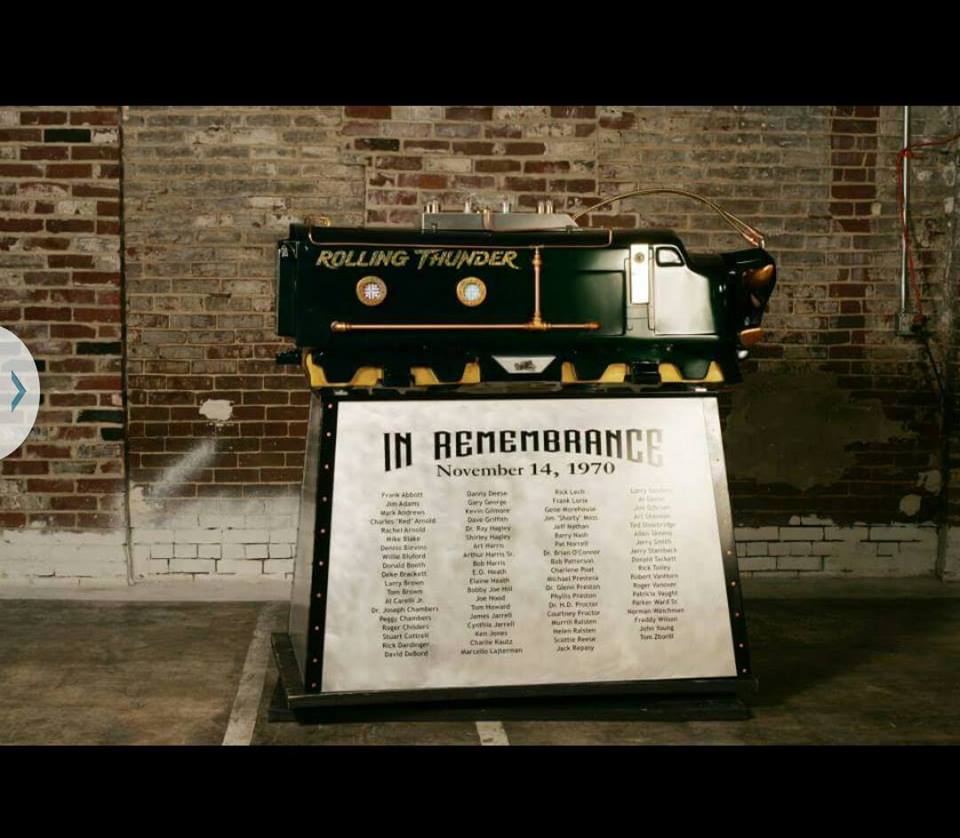 "United by Culture" was designed by Karen Frye who wanted to portray Appalachian identity through its relationship to quilting while including Marshall University and West Virginia University colors to depict the in-state university rivalry. (Photo c 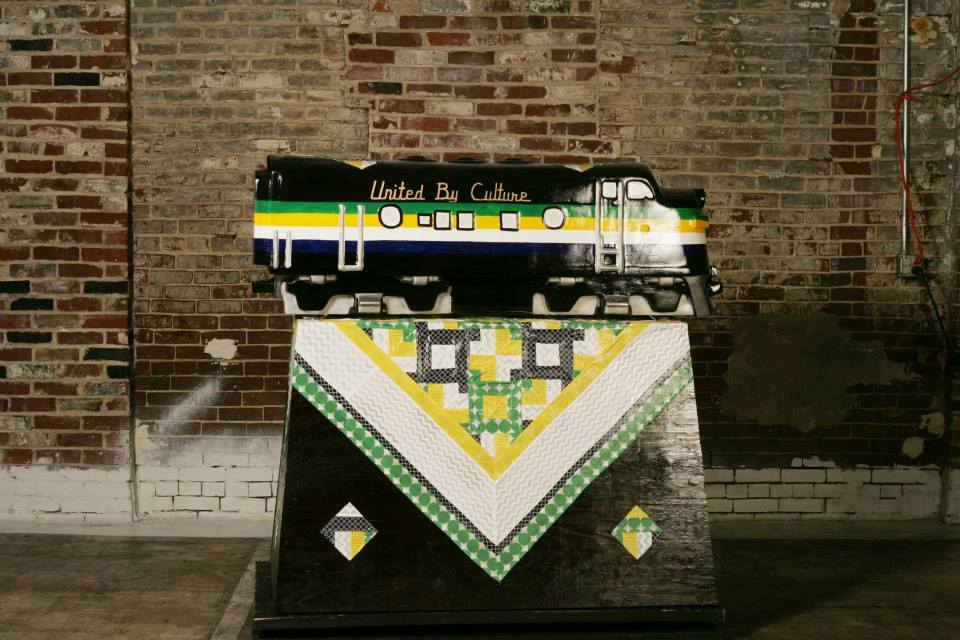 A train clearly displaying the Hoops Family and Children's Hospital "snowflake" that kids searched for within the artwork of the trains; some snowflakes were cleverly hidden by the artists. (Photo courtesy of Artisans Express Facebook page) 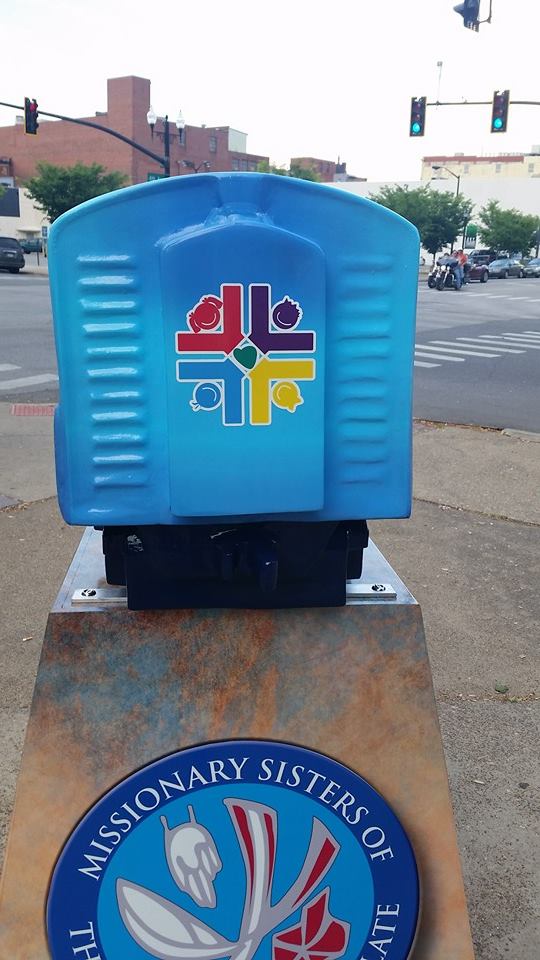 The Artisans Express was made up of local artists within the Tri-State area whose backgrounds, experience, and ages are as colorful and diverse as each unique train.  Art themes ranged from abstract styles to very specific designs portraying images that reflect West Virginia identity: the Black bear, Marshall/WVU pride, CSX history, WV’s state seal. Other trains portrayed themes such as ideas/images centered on the youth of West Virginia such as "Orphan Train" and "Lucky #7." One train was made up of decoupaged photos of historic landmarks in Huntington, WV that have evolved since their original construction, portraying a “then and now” kind of theme.  According to the Artisan Express Facebook page, various trains also depict the Hoops Family Children’s Hospital “snowflake” symbol (similar to the Cabell Hospital Logo) that was hidden on each train; it was considered a game for people to hunt for them within the artwork.

Originally, the locations of the 42 trains ranged from locations on Fourth and Third Avenues and also from areas of 10th Street to 7th street. With the completion of the auction, some train engines remained in their original locations and states of being; however, some have been moved and/or modified by their new owners. According to an article in the Harold-Dispatch, a few of the train engines are being modified or moved to be used in “man caves” like the “Reds Baseball train that was near the restaurant La Familia on 4th Avenue. Likewise, other trains have found new and suitable homes such as the engine titled “Rolling Thunder” (a tribute to the Marshall plane crash victims) which was relocated to the Henderson Center. Bob Garrett’s whimsical train titled “Lucky #7” was donated to the Hoops Family Children’s Hospital at the Cabell Huntington Hospital location.

The efforts of Artisans Express was in collaboration with Cabell Huntington Hospital Foundation, the City of Huntington and the Cabell Huntington Hospital Auxiliary with the support of many organizations and businesses throughout the community. According to the Hoops Family Children’s Hospital website, the art expedition was similar to Chicago’s Cows on Parade and Lexington’s Horse Mania. The 42 trains were on display from May 9, 2015 through October 31, 2015 when the Rendezvous at the Rails event auctioned off the trains to raise money for Hoop’s Family Children’s Hospital. The initial goal of the project was to raise $150,000; however, donations significantly surpassed this mark, raising more than $280,000. Another Artisan Express Fundraiser of a similar kind is currently in the planning process. The date for this event is projected for some time in 2017; however, this endeavor remains mostly undecided.

For those of whom did not get to visit all 42 train engine displays before they were auctioned off, there is a coffee table book that was created to provide photos and information about artists, train display locations, and more information about the fundraising initiative from start to finish. The Artisans Express Coffee Table Book will ship on February 1, 2016.  The books are available on Cabell Huntington Hospital’s website and through Empire Books at Pullman Square which is located in downtown Huntington, WV. 100% of the proceeds go to Hoops Family Children’s Hospital.