In 1751, at the present site of Lewisburg, WV, Andrew Lewis and his father found a spring which they named Lewis Spring. Eventually this spring started to attract settlers, and houses were built near the springs. Due to the French and Indian War, settlers had to disperse but in 1760 they returned to the area. Scholars have long debated the existence and year of establishment for Fort Savannah, however the location of the fort around the two springs and 100 yards southeast of the courthouse seems to be agreed upon.

The historical marker for Fort Savannah 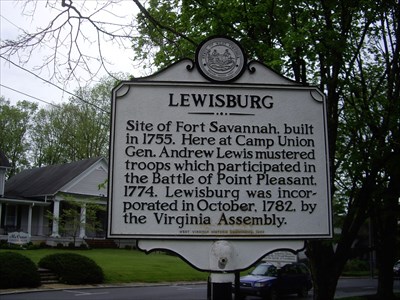 In the early 1750’s, Andrew Lewis, along with his father, surveyed and discovered the area that is now Lewisburg, West Virginia. The Lewis duo discovered a clear mountain spring that was remarkable in both size and volume, and decided to establish settlement there. The initial settlement of the area was deemed “Savannah,” and was later changed to Lewis Spring. The fort that was established on the land was named Fort Savannah. Due to the overlap in names of the area and the fort, scholars are unsure as to the exact year Fort Savannah came into existence. The first theory is that the fort was built in 1755, the same year that was placed on the historical marker, due to a letter from Captain Robert Orme to General Braddock stating that Andrew Lewis ordered his men to build two stockade forts. The second theory is that Fort Savannah was established in 1770, a date engraved on another historical marker located at the courthouse, between the French and Indian War and Lord Dunmore’s War.

Early letters in 1755 indicate that there were around 60 settlers housed in the fort at Green Brier, however scholars believe that the Green Brier being referred to was Fort Greenbrier at Marlington. It is also possible that Fort Savannah was constructed as a result of the act by the General Assembly in 1756 to build forts spanning from the Potomac to the Alleghany Mountains. If Fort Savannah had been constructed in the 1750’s, it is likely that it would have been destroyed in 1763 during the Muddy Creek and Clendenin massacres. One reason scholars believe the fort did not exist during these attacks was the fact that when Ann Clendenin escaped, she fled to the settlements at Jackson River which were much further away than the location of Fort Savannah.

Fort Savannah could have possibly been built when settlers returned to the area in the early 1770’s, along with Stuart’s Fort, Donnally’s Fort and Arbuckle’s Fort. Colonel John Stuart, who is responsible for documenting Greenbrier County’s early history, does not mention Fort Savannah in his writing. Stuart mentions Camp Union, but not Fort Savannah. The first mention of an actual Fort Savannah in Greenbrier was during Lord Dunmore’s War, however these texts only proved existence and did not describe size or type. There are no records of when Fort Savannah was destroyed or razed, however local legend says that the Arbuckle house that sits on the same plot of land was partially constructed of logs from Fort Savannah.