The United States Post Office and Court House is located at the corner of Fifth Avenue and Ninth Street in Huntington. As Huntington grew rapidly in the decades after its foundation in 1871, the city was in need of a federal building by 1900. Erected in 1907 and expanded twice, the building is an example of the civic architecture of the early twentieth century. It is part of a cluster of governmental buildings in downtown Huntington that recall the city’s growth and prosperity at the turn of the century. In the late 1970s, the post office moved to a different location, and the building now houses the General Services Administration. It is still a federal building, and public access is limited. 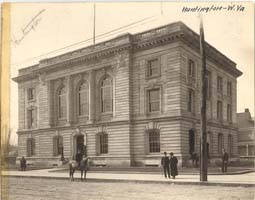 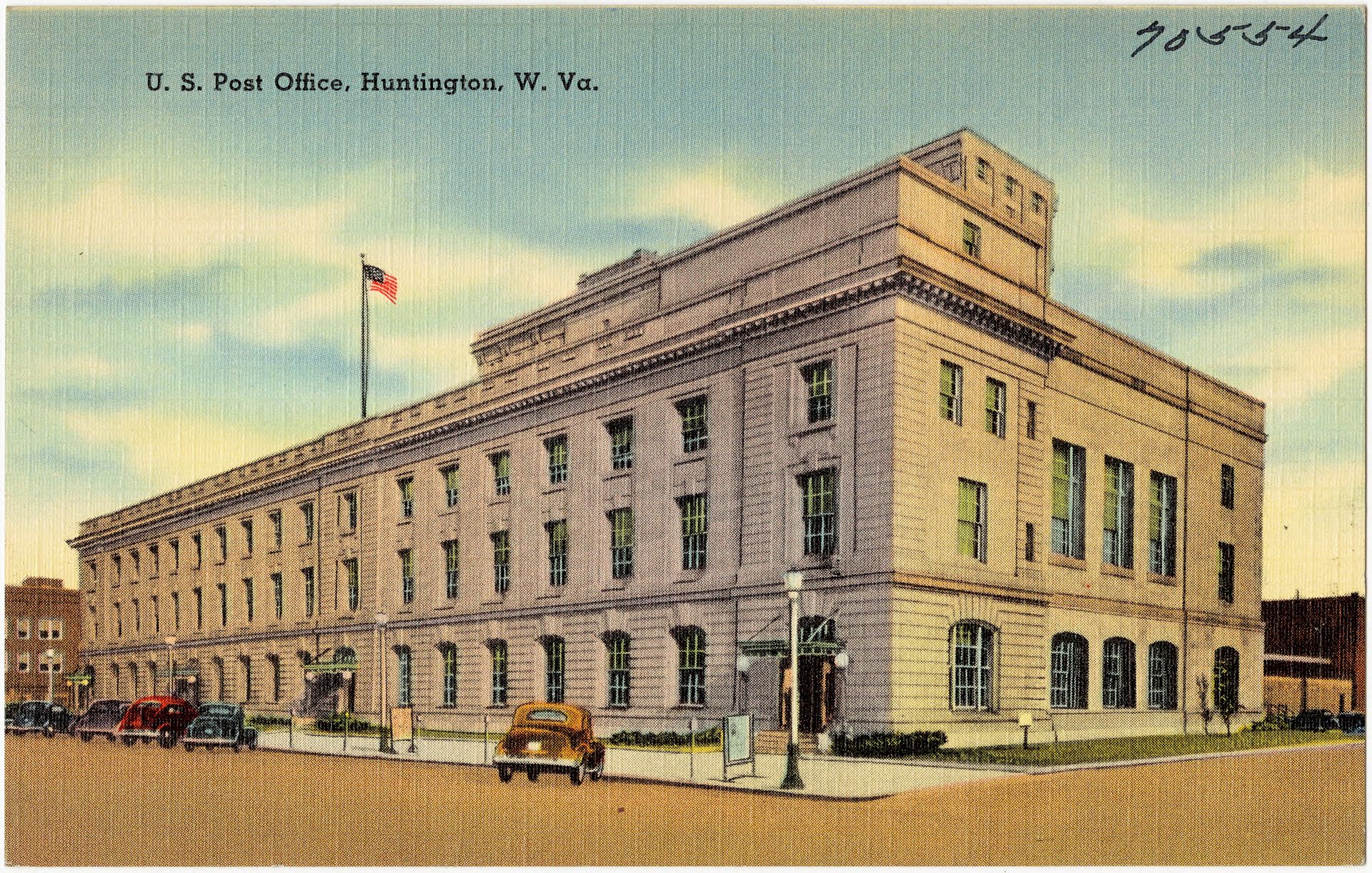 Exterior of the federal building 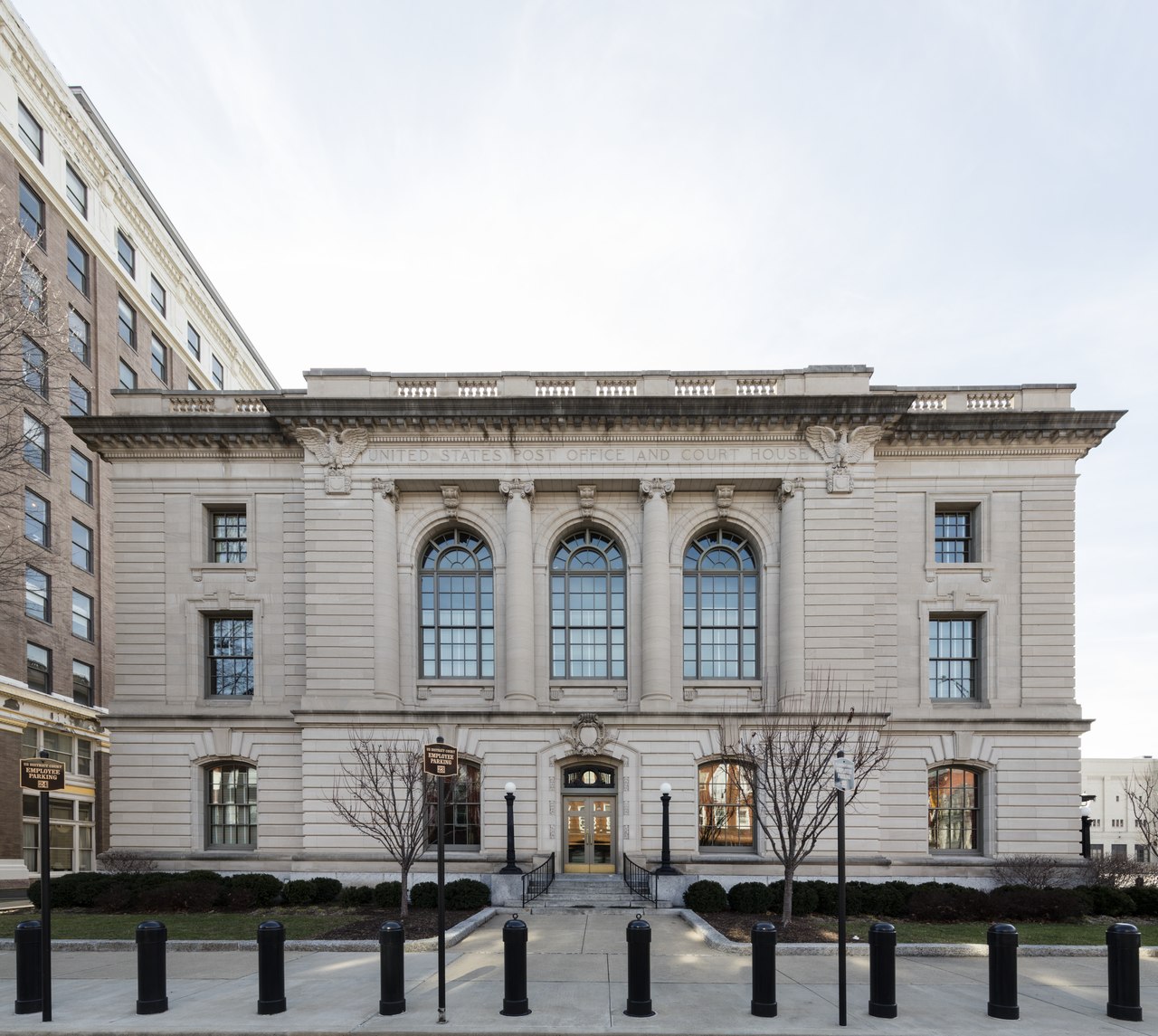 Exterior of the building 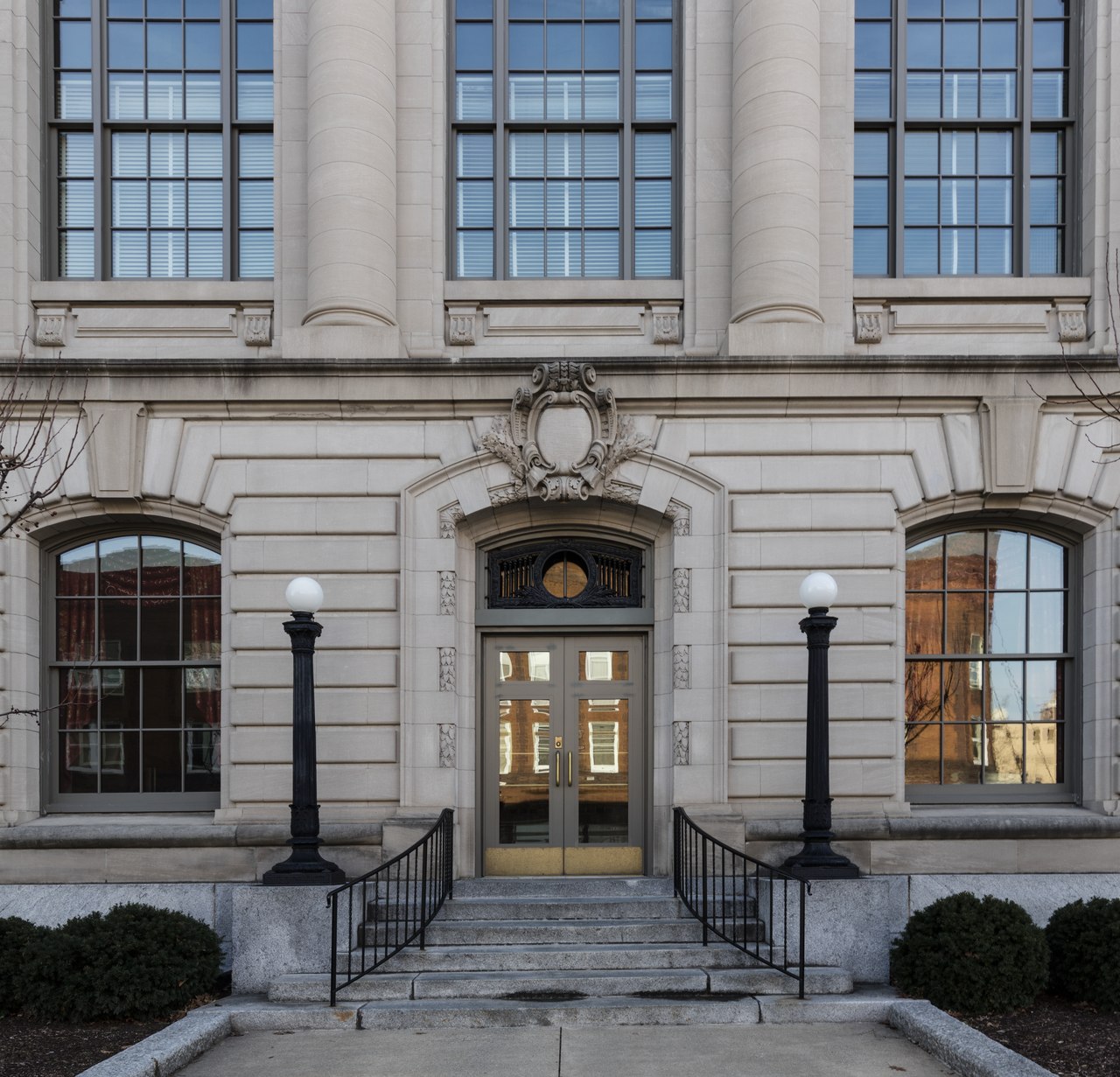 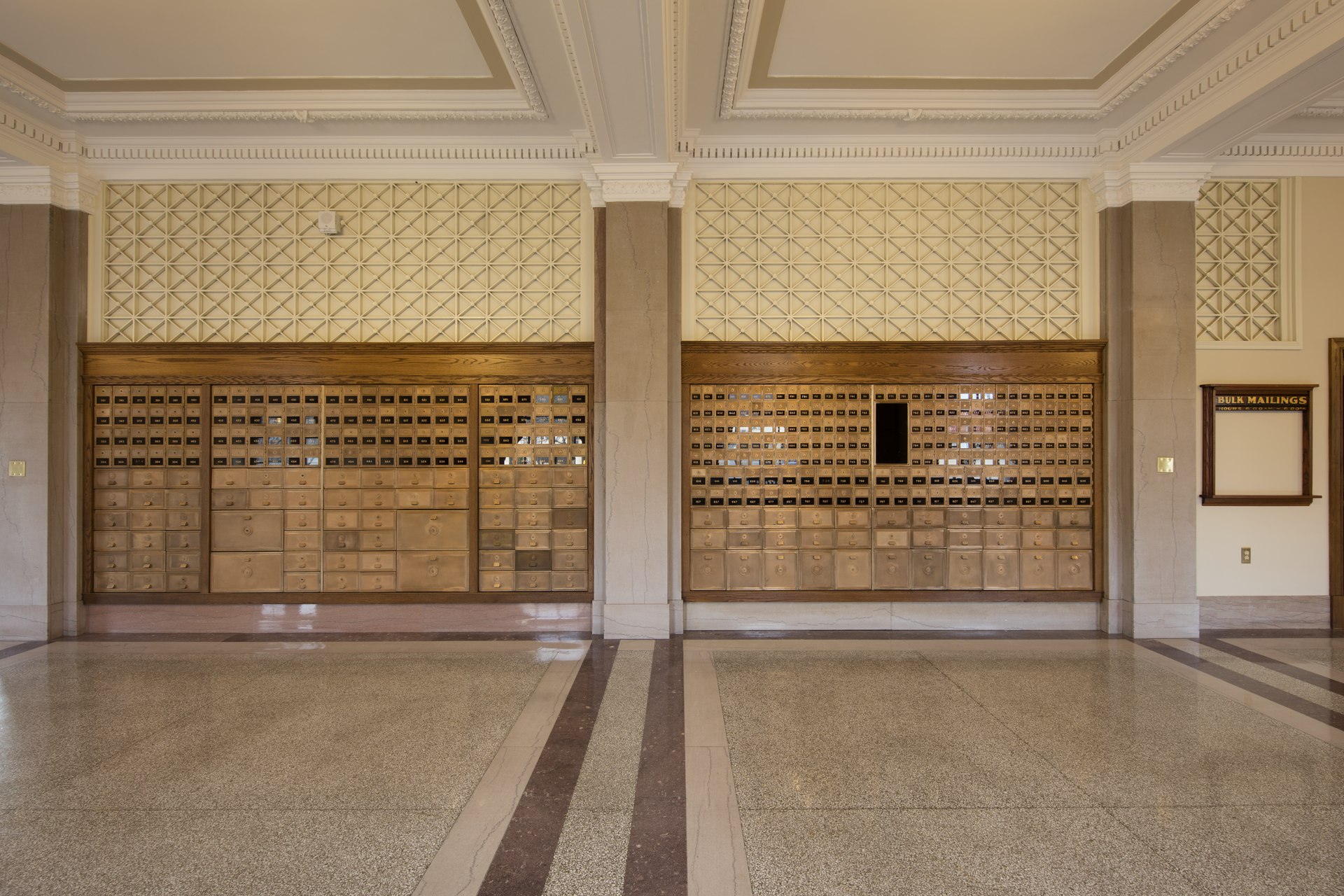 One of the building's courtrooms 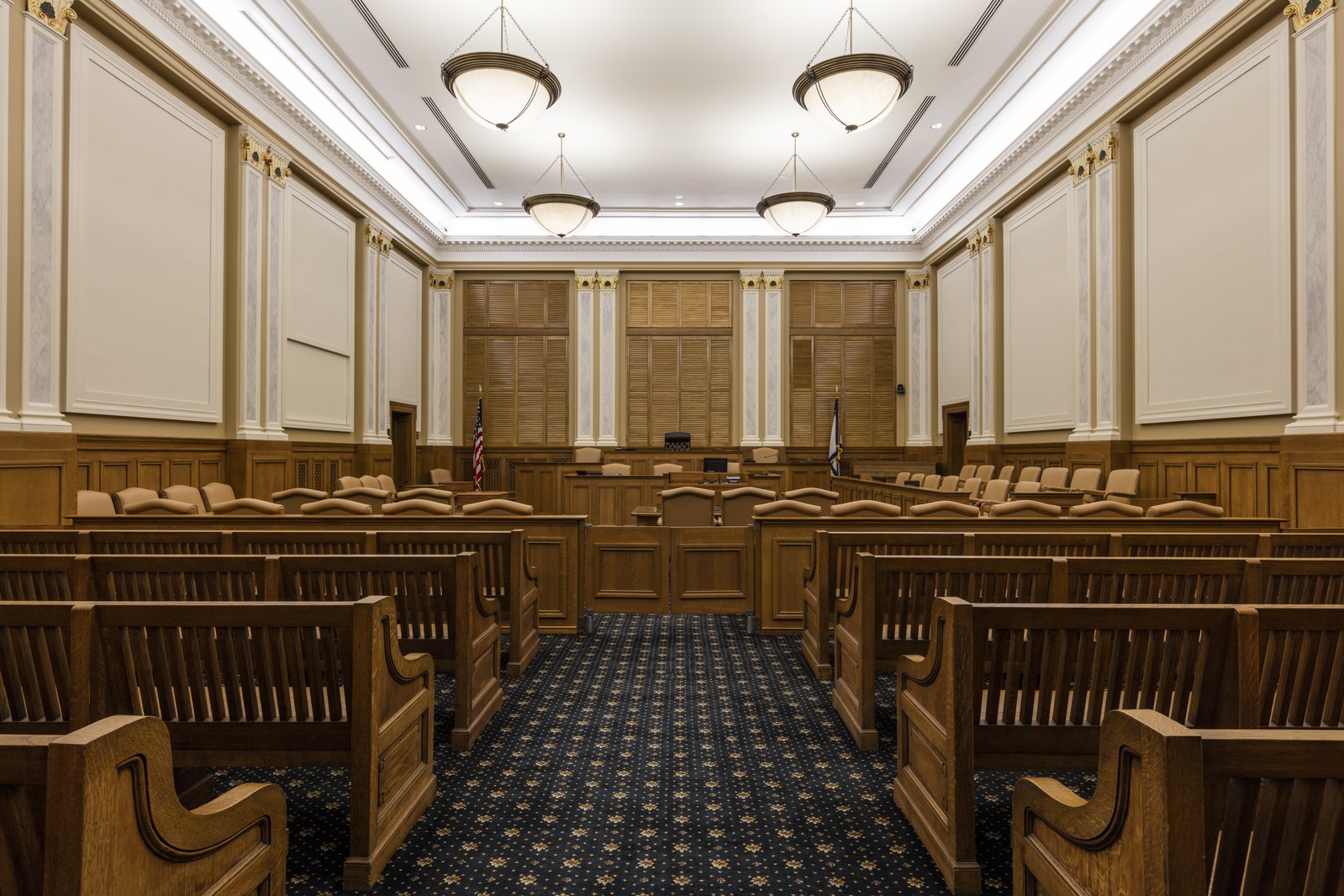 The population of Huntington boomed in the late 1800s with the success of the railroad industry. In 1902, a federal judicial district was established for southern West Virginia, drastically raising the number of federal court cases in the area and greatly increasing business at post offices. Construction began in 1905 on a federal building that would address the needs of the growing city. The architectural firm Parker & Thomas of Boston and Baltimore was chosen to design the building, following the Tarsney Act of 1893, which allowed architects of federal buildings to be chosen via competition among private firms. Completed in 1907, the three-story building was designed in the Beaux-Arts style typical of American public architecture at the time, though the ornamentation of the limestone exterior is less elaborate in comparison to other buildings of the style. The interior of the building is adorned with marble and ornamental iron fixtures.

By 1910, Huntington had become West Virginia’s largest city, with a population of 31,000 people. At this point, it became necessary for the federal building to expand. In June of that year, Congress permitted the purchase of additional land surrounding the structure. When the addition was completed in 1919, the building almost quadrupled in size. Marquees were placed over the building’s entrances in the 1920s, and a third and final addition was completed in 1937. Notably, both additions were designed to continue the original style and keep the building visually consistent. In 1962, the lobby of the post office was remodeled to include new entrance doors, vestibules, and light fixtures. In 1964, the courtroom was remodeled.

The building continued to serve Huntington as a post office and a federal court house until the 1970s, when the postal department was moved to another location. In 1977, the General Services Administration replaced the post office. In 1980, the building was renamed after Judge Sidney L. Christie, a district judge in Huntington from 1964 until his death in 1973. Still a federal building today, the building retains its historic character over a century after its construction. It forms part of a cluster of public architecture in downtown Huntington, including the Cabell County Courthouse, Huntington City Hall, and the former Carnegie Public Library. Built between 1899 and 1902, these buildings stand as a reminder of Huntington’s prosperity at the turn of the 20th century.