Once a thriving industrial town, Central City has since been adapted into a cultural and antique district. Image courtesy of Steven Cody Straley. 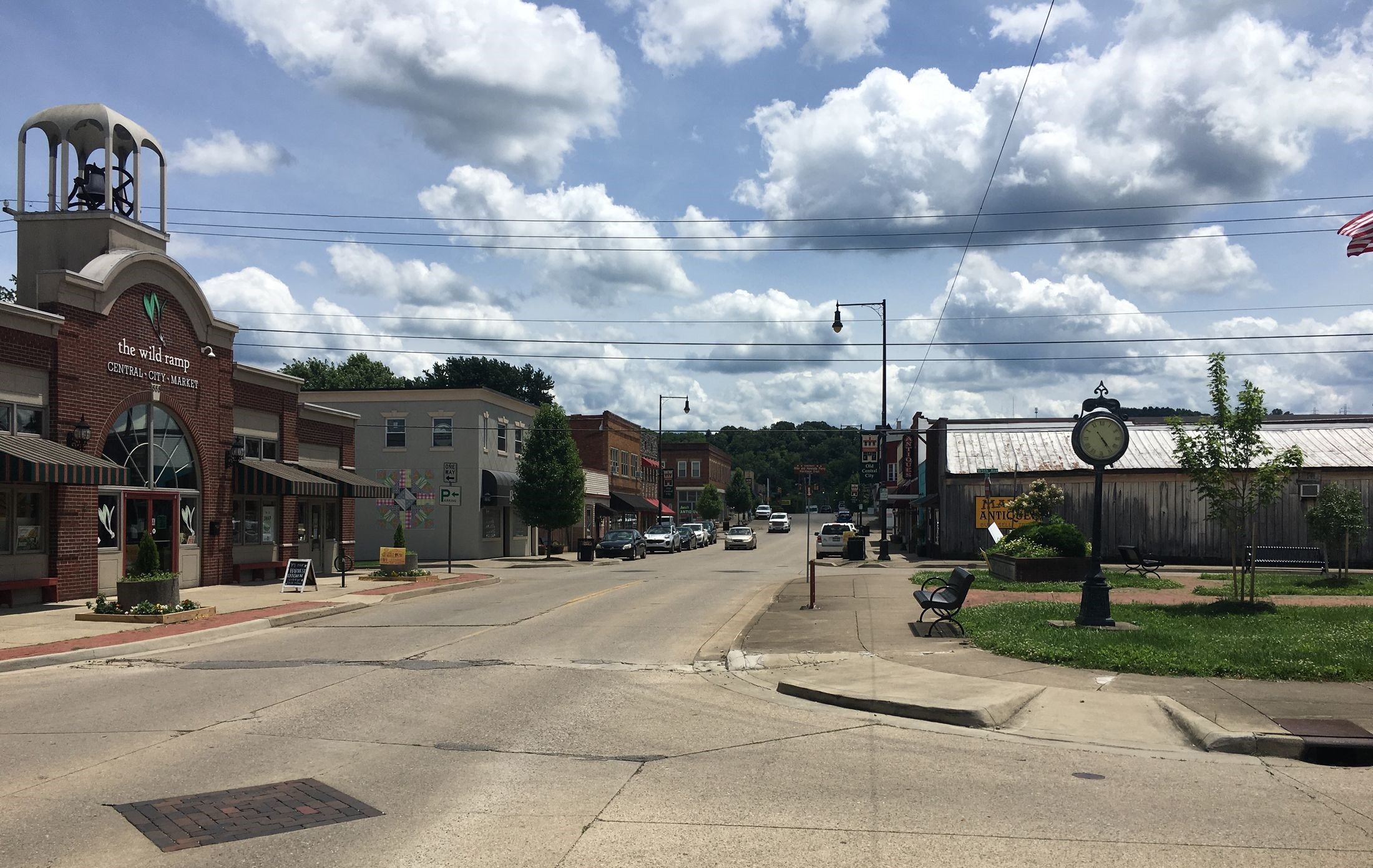 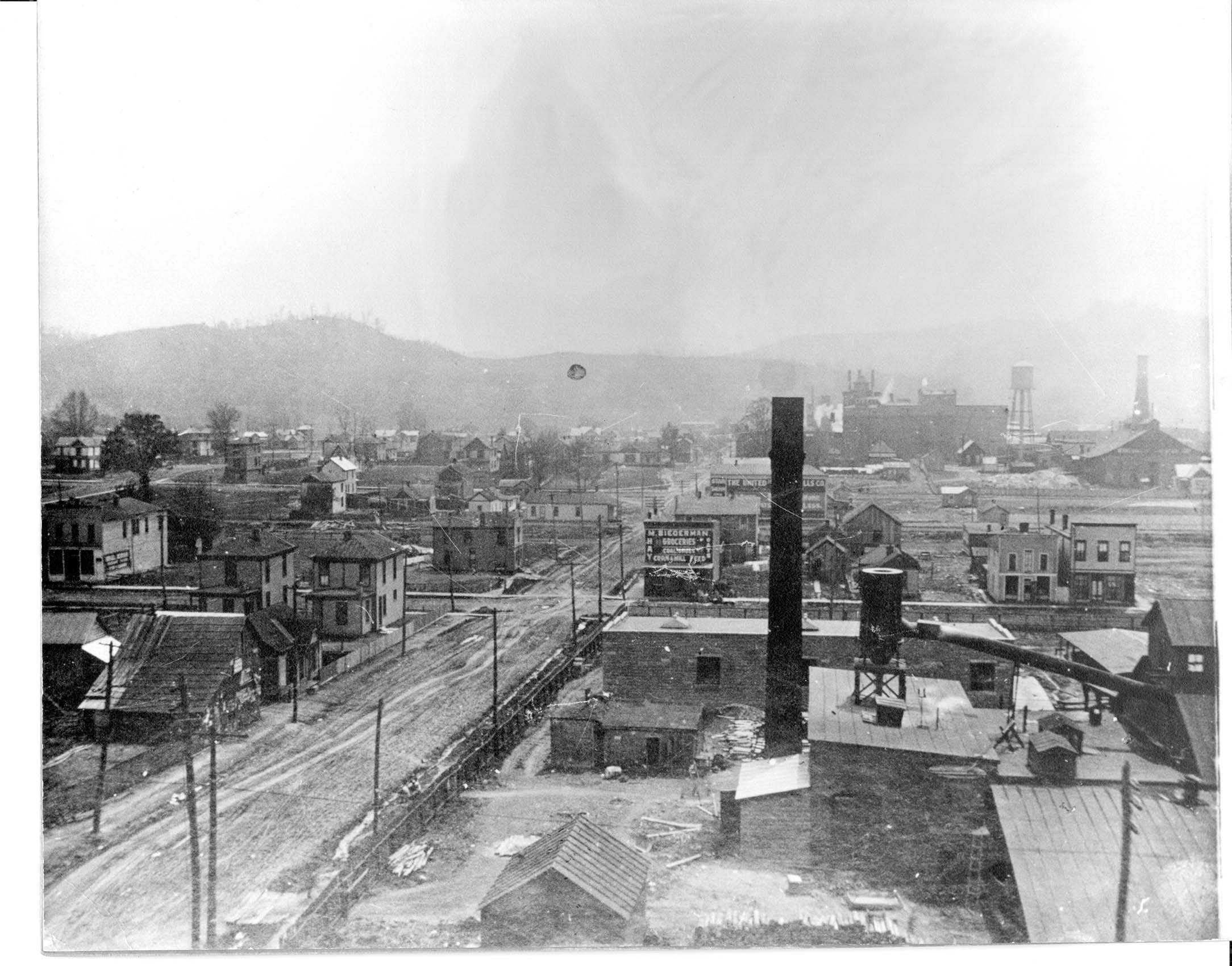 The Old Central City Park and Gazebo at 5th Avenue West and 14th Street West serves as the central point of the neighborhood and the site of many community activities. Image courtesy of Steven Cody Straley. 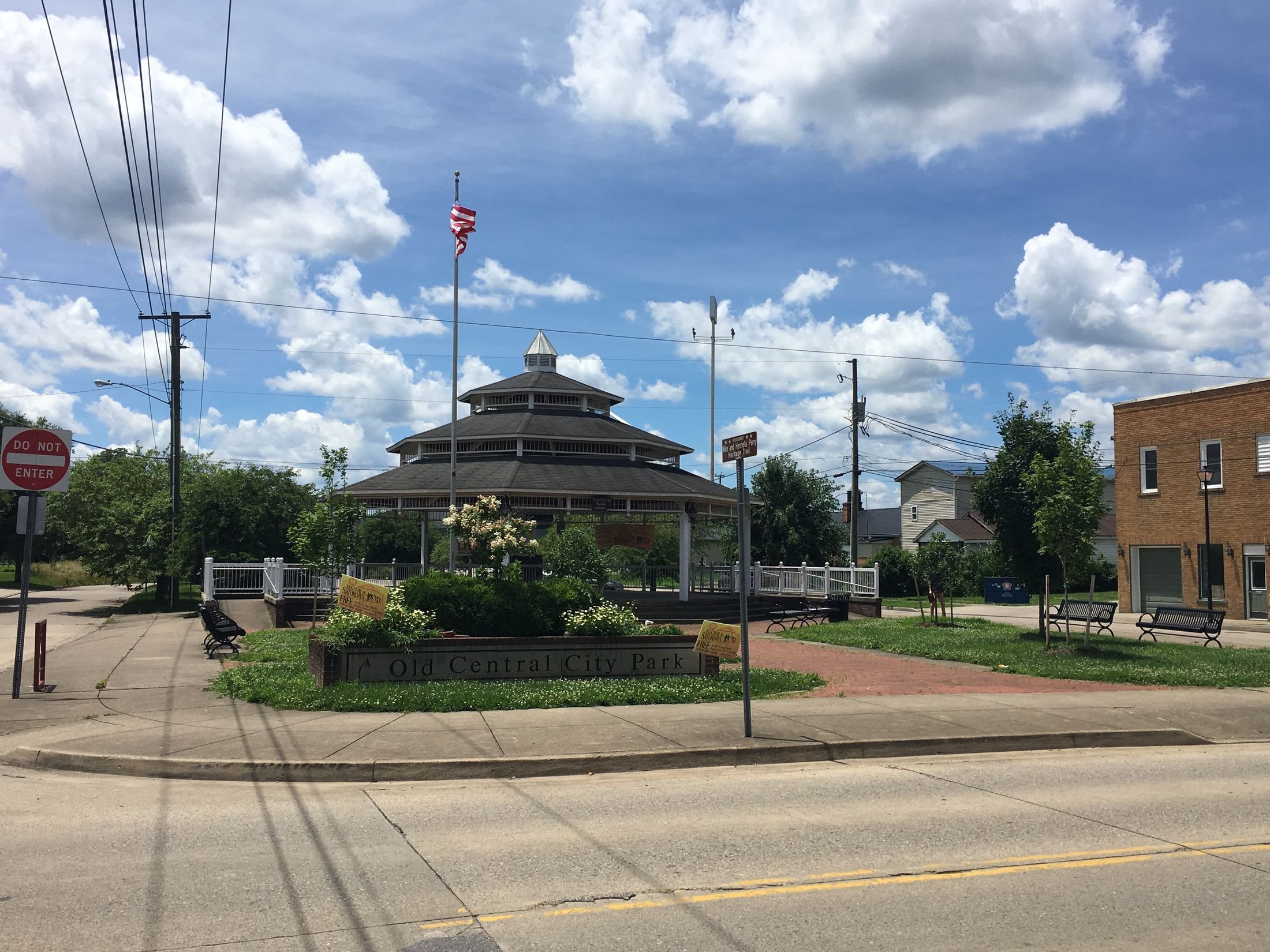 The Wild Ramp is a non-profit grocery store that specializes in selling goods from local farmers and producers. Image courtesy of Steven Cody Straley. 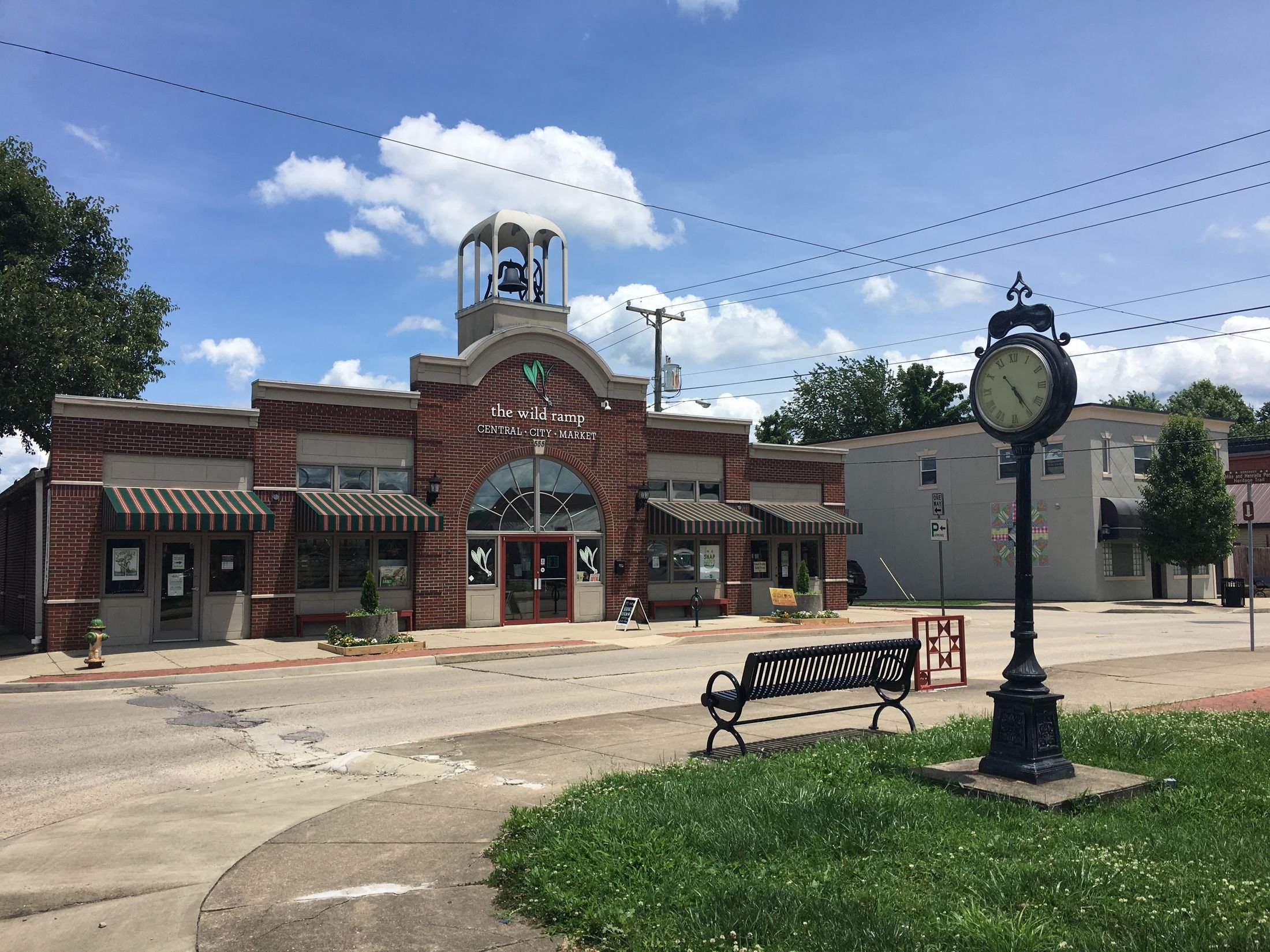 Many old storefront buildings have been converted into antique stores and specialty shops. Image courtesy of Steven Cody Straley. 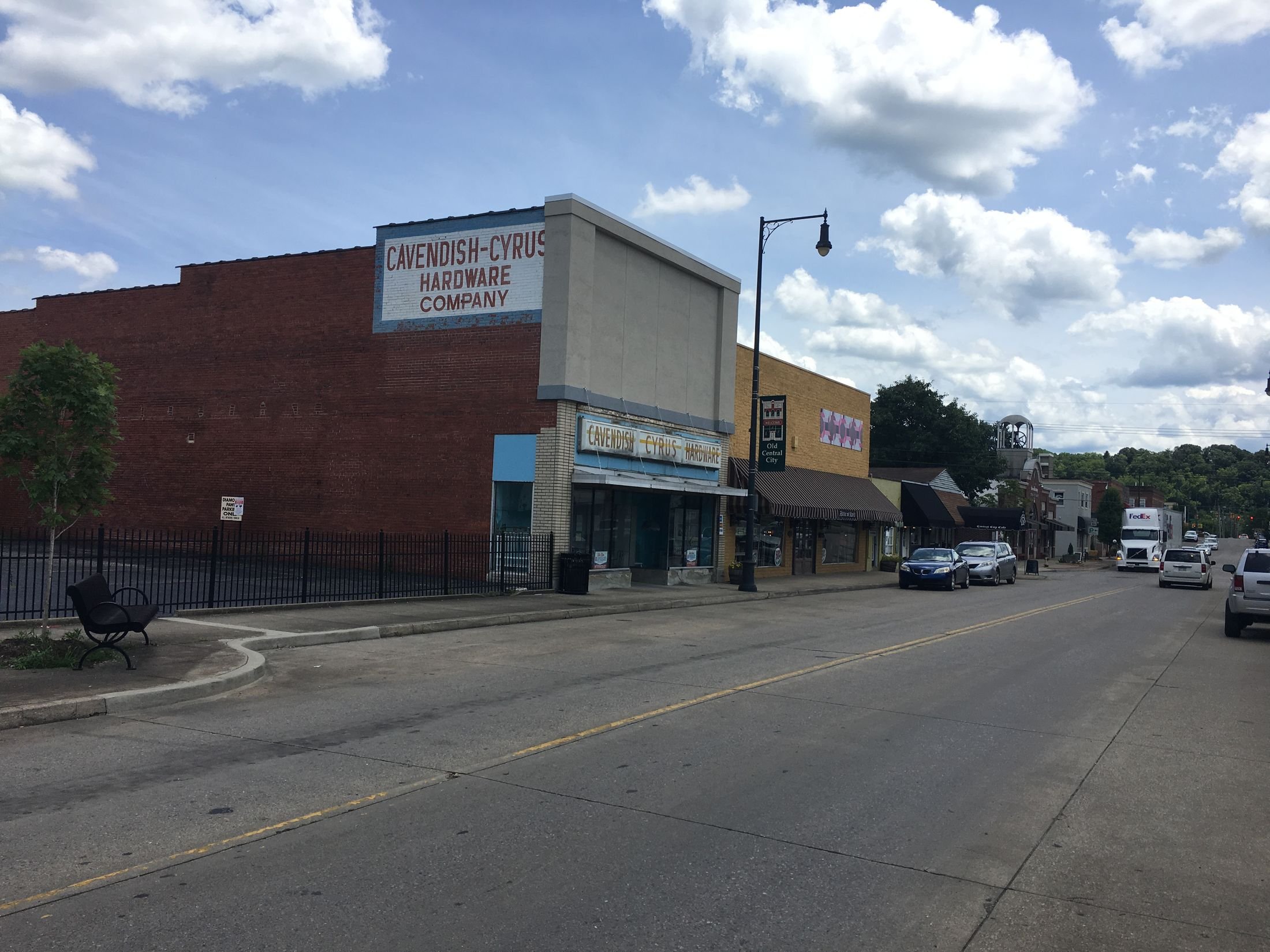 Various factories that existed in Central City and the surrounding area. Image courtesy of the West Huntington Public Library. 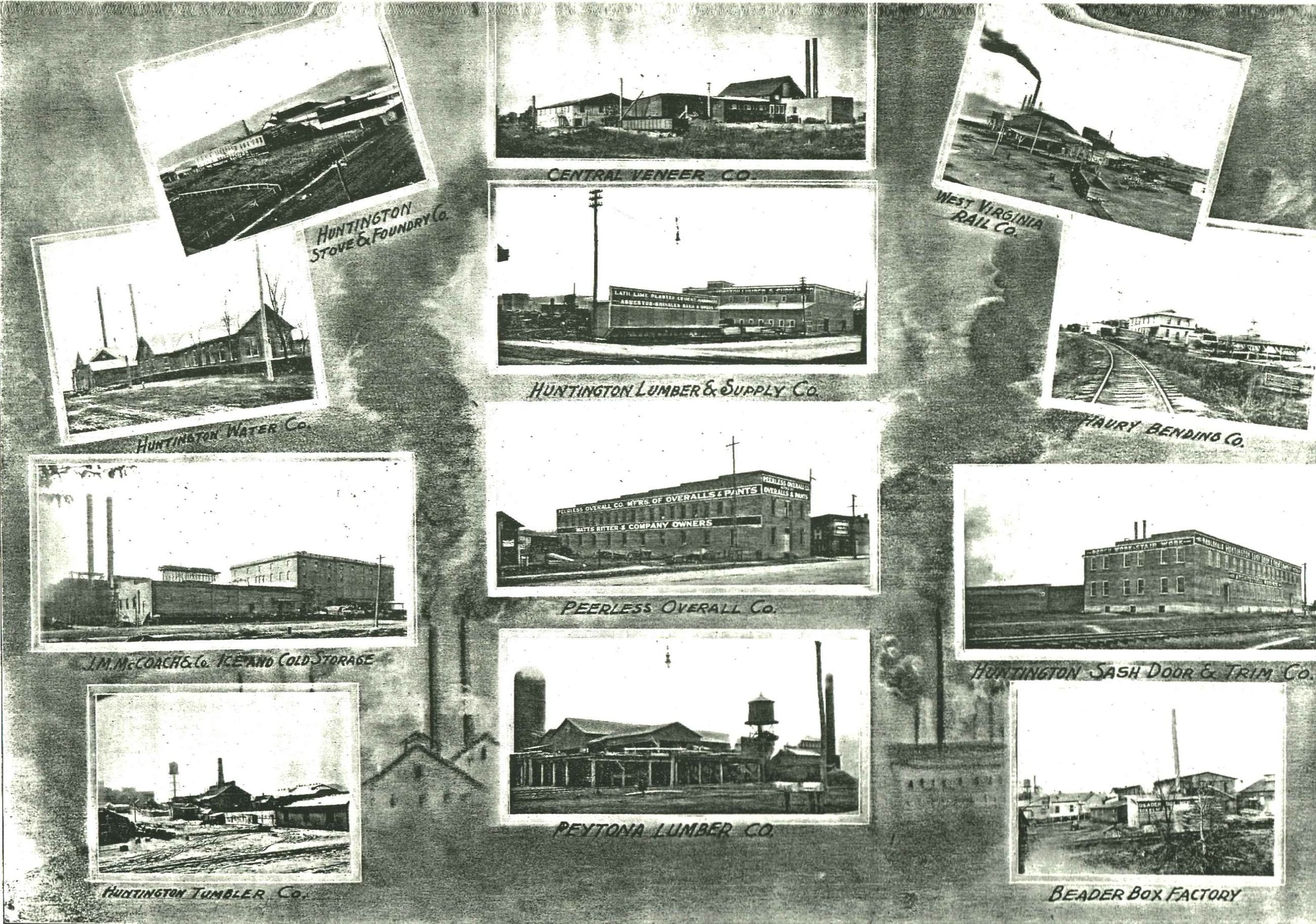 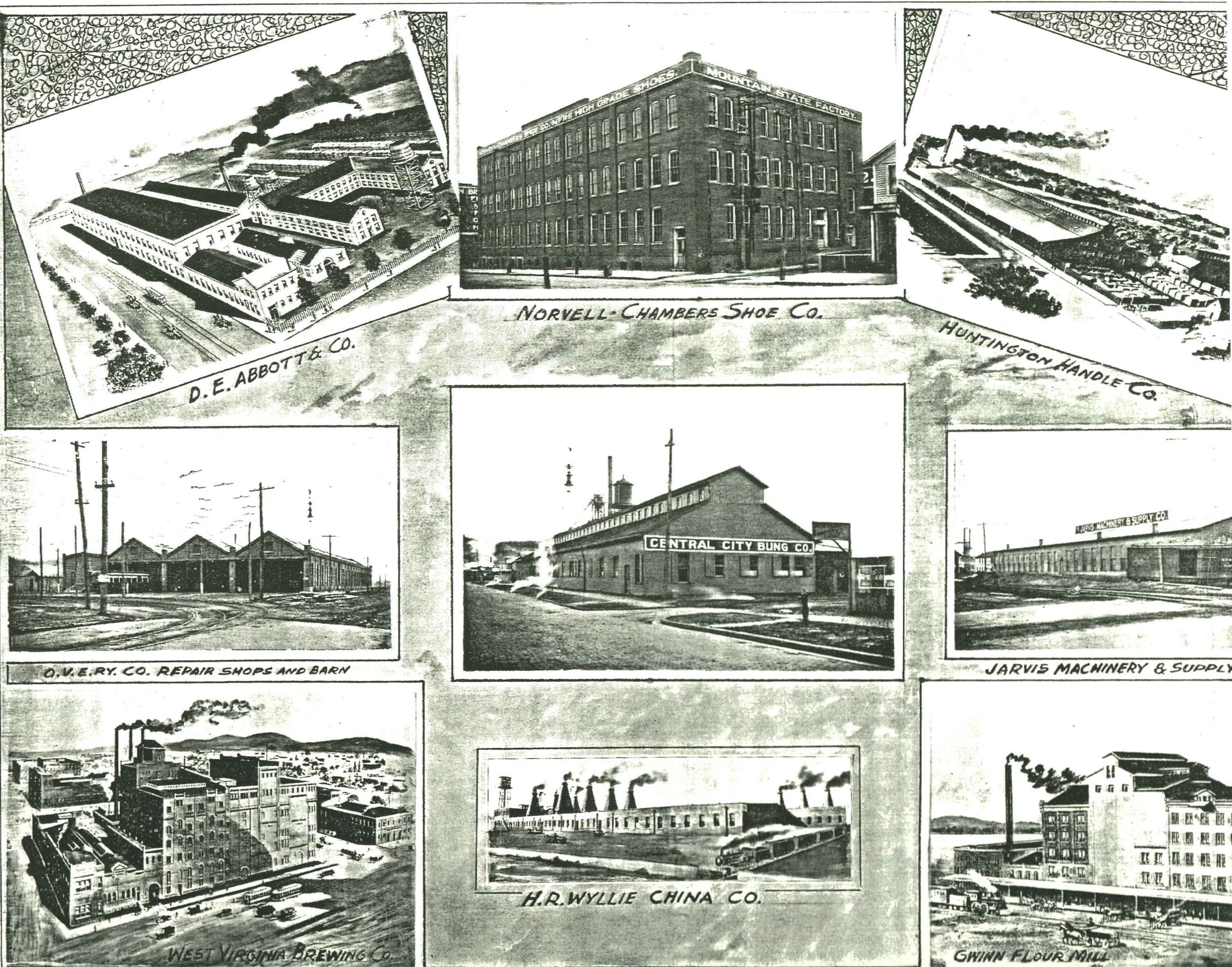 Around 1890 a group of prominent Cabell and Wayne County businessmen, including Martin and Floyd Chapman, Samuel and Zachary Taylor Vinson, J. L. Caldwell, G. F. Miller, and George McKendree formed the Huntington and Kenova Land Company with the goal of building a new community just west of Huntington. The men sought to create an industrial, manufacturing town to supplement Huntington, which at the time contained primarily only residential neighborhoods and railroad facilities. Several farms were purchased to make room for the new town, which was dubbed Central City. Some sources state that the name was chosen because the area was centrally located between Catlettsburg, Kentucky and Guyandotte, West Virginia. Because Huntington had already been established and overshadowed Guyandotte however, this claim is questionable. George McKendree designed the layout for the town, which consisted of numbered streets running north to south and avenues named after early American presidents running east to west. Central City was officially incorporated on July 31, 1893. Municipal services were set up, and Martin Chapman was elected as the first mayor.

In order to entice industries into coming to Central City the Huntington and Kenova Land Company offered generous land grants; in some instances businesses were given entire city blocks. The tactic proved fairly successful and in a short time there were a number of businesses large and small operating in the town. The largest industries were the Fesenmeier Brewery, the Hartzell Handle Factory, the D. E. Abbott Company (which manufactured picture frames), the Huntington Tumbler Company (which manufactured glass dishware), and the Central City Bung Company. The Bung Company, which manufactured poplar wood plugs used to seal beer and whiskey barrels, supposedly was the largest producer of bungs. Because of this, Central City was occasionally called the “bung capital of the world.” Other businesses included Heiner’s Bakery, the Duncan Box and Lumber Company, as well as a furniture factory, a veneer plant, a planning mill, an ice plant, warehouses, and grocery stores. The town also boasted a fire department, police department, electric lighting, and a newspaper.

Central City flourished thanks to the industrial growth and its population peaked at around 5,000. In 1908 Huntington requested to annex Central City, along with the town of Guyandotte to the east. The Central City Council approved the proposed merger in December 1908, and on June 3, 1909 Central City became officially incorporated into the City of Huntington. The area that was Central City became referred to either as West Huntington, the West End, or Fourteenth Street West, after the central street in the community. The neighborhood was not affected much by annexation and business continued as usual. Over the decades, however, these industries gradually shuttered. Today Heiner’s Bakery remains one of the only original Central City businesses still in operation. By the 1970s and 1980s the community was gripped by urban decay. Bars and gentleman's clubs occupied storefronts; levels of crime rose; and many historic buildings were demolished due to neglect.

In 1983 a redevelopment plan was submitted to Huntington proposing ways to improve the Central City community. It suggested actions such as creating recreational spaces, improving public facilities, repairing infrastructure, beautifying the neighborhood, and promoting it as a historic district. It also proposed that buildings be preserved or restored to their 1890s appearances in order to attract both residents and commercial activity. In 1988 the City of Huntington began a five-phase program to economically redevelop the district, which was christened as Old Central City. That same year the Old Central City Association was formed by community members to preserve the early history of Central City and its industries. Huntington and the Association each worked for years to revitalize the area. Infrastructure was improved, a park and gazebo were built, and a farmers’ market was established. Bars were replaced with small businesses –primarily antique shops– in many of the historic storefronts. In 1991 the Association launched Old Central City Days, an annual summer street festival that includes vendors, antique sales, and live entertainment.

Today Old Central City is promoted to tourists and locals alike as an antique district and cultural center. In addition to antique stores, the area around Fourteenth Street West is home to other small businesses such as a nonprofit, locally-sourced grocery store and the Central City Café, which was notably featured on the Food Network’s Diners, Drive-ins and Dives.  It is also located within close proximity to several area museums, such as Heritage Farm Museum & Village, the Museum of Radio and Technology, and the Collis P. Huntington Railroad Historical Society’s open-air railroad museum. Also located within Old Central City is the West Huntington Library, a branch of the Cabell County Public Library; it contains a collection of materials on the history of Central City.