The First Congregational Church of Ceredo was established in 1874. It is the second oldest church in Ceredo, following the United Methodist Episcopal Church in 1866. It is also said to be one of only three Congregational churches in West Virginia. The current building, located on the northeast corner of First Street West and C Street, has been in continuous use since its construction in 1886. The Queen Anne style building has largely remained the same, except for a 1926 annex on the eastern side. The church was added to the National Register of Historic Places in 2021.

The most prominent feature of the church is its corner bell tower. Image courtesy of the author. 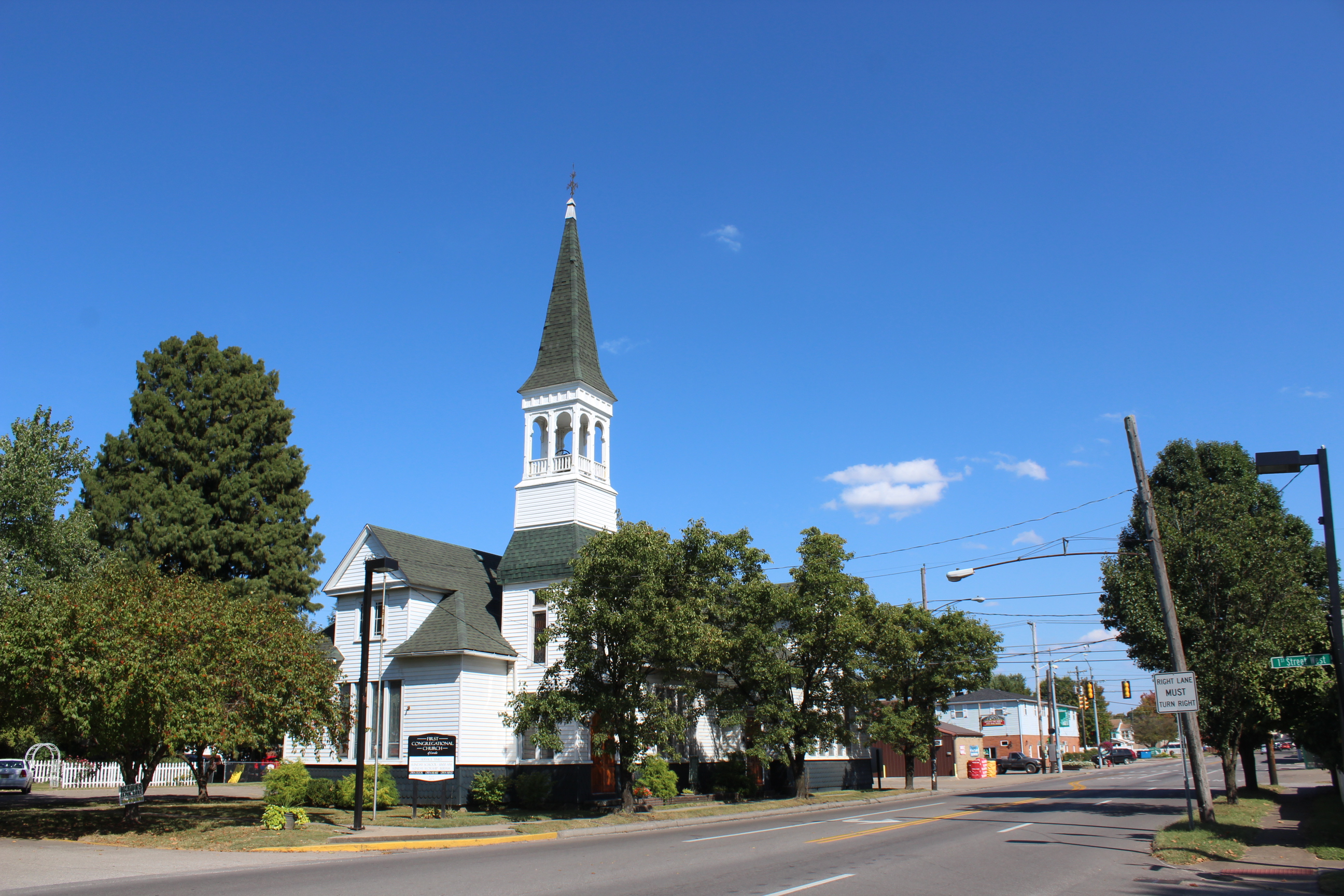 The church sometime after its construction in 1886. Courtesy of the Ceredo Historical Society Museum. 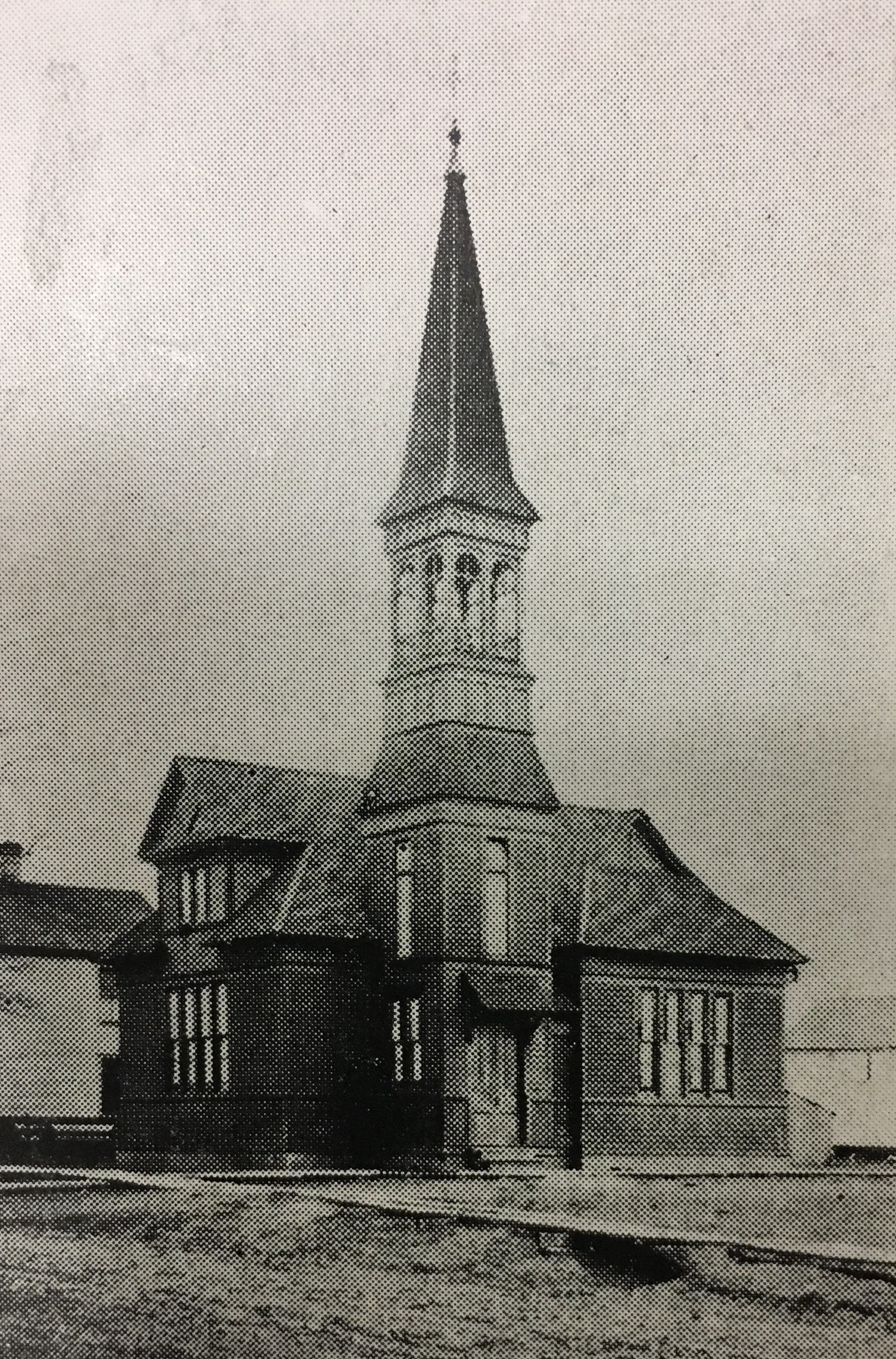 Charter members of the church in 1874. They were all settlers from New England who remained in Ceredo after the Civil War. Courtesy of the Ceredo Historical Society Museum. 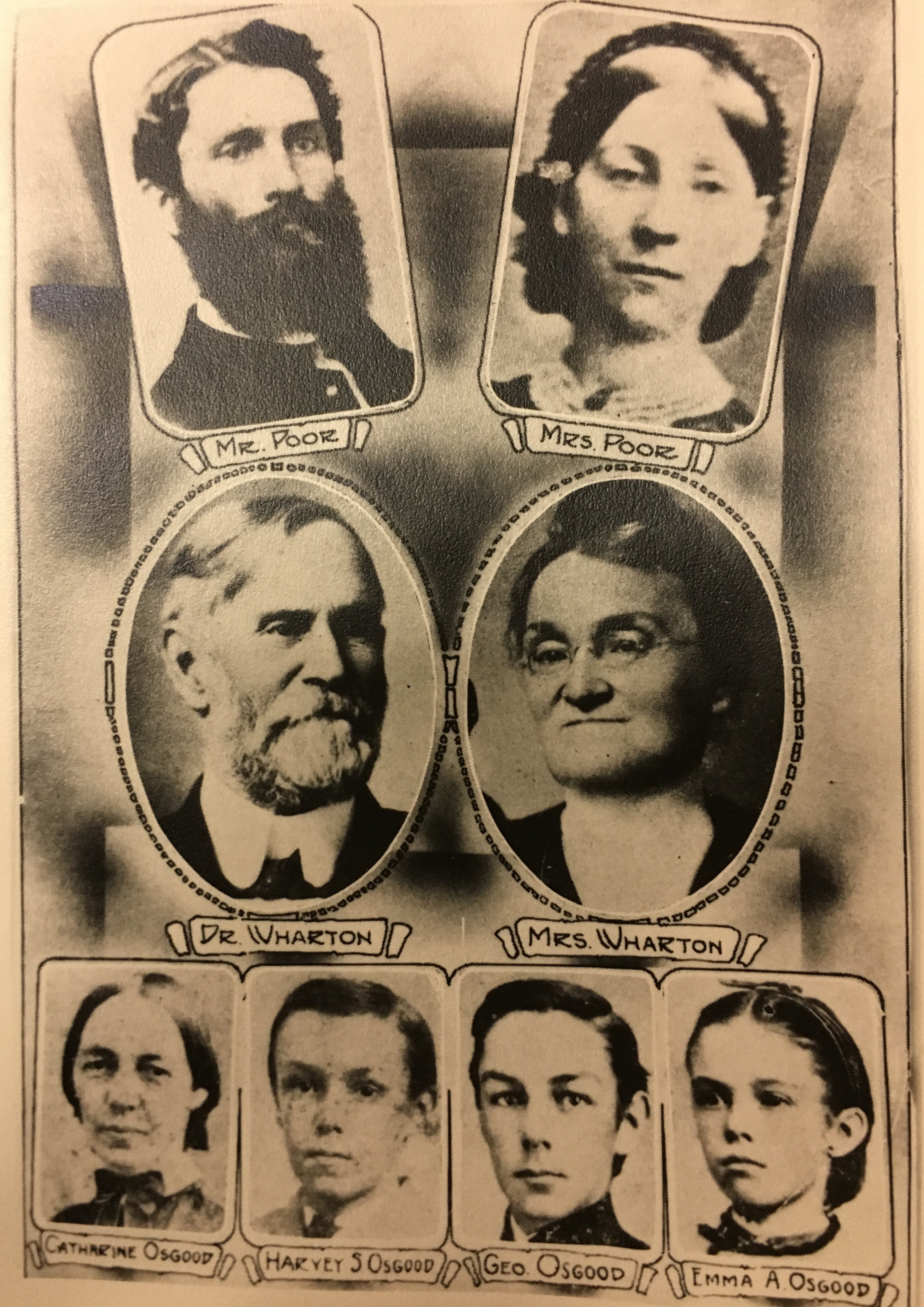 Facing west down C Street, 1913. The church's bell tower stands out among the neighborhood. Image courtesy of the Kenova Historical Commission 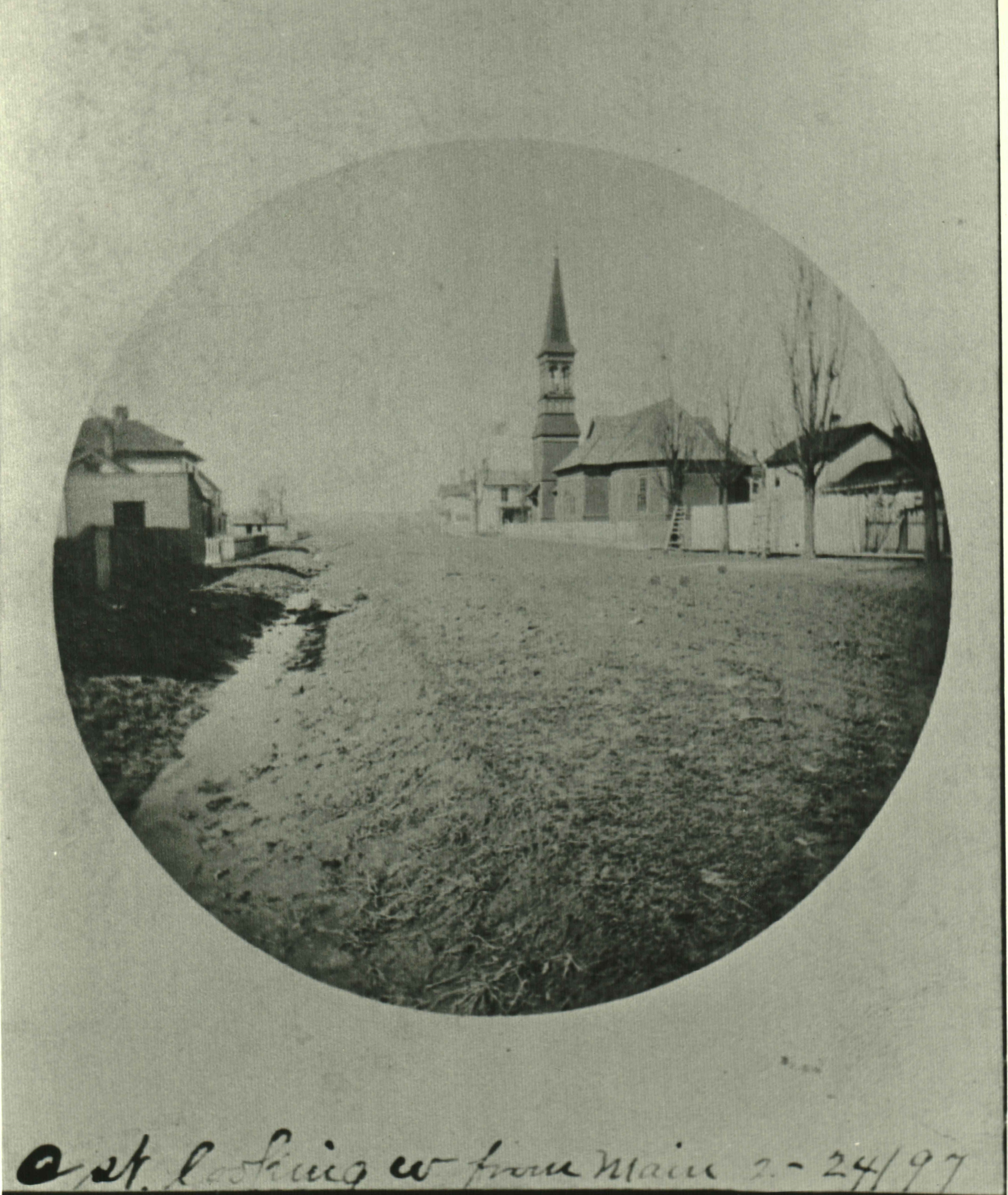 The church in 1926 following the construction of its eastern annex. 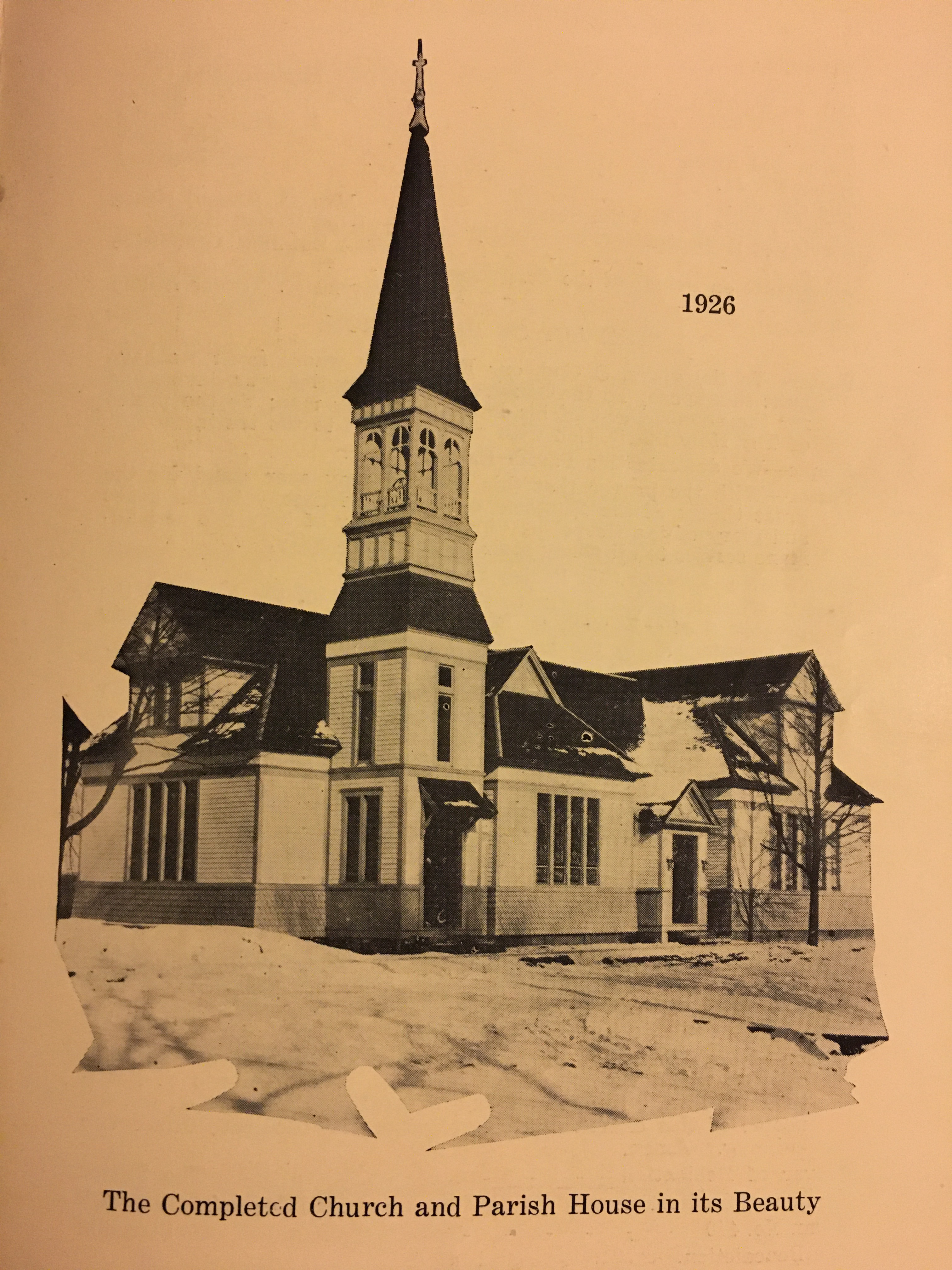 Interior of the church. The original pulpit is still in use. Courtesy of the First Congregational Church of Ceredo. 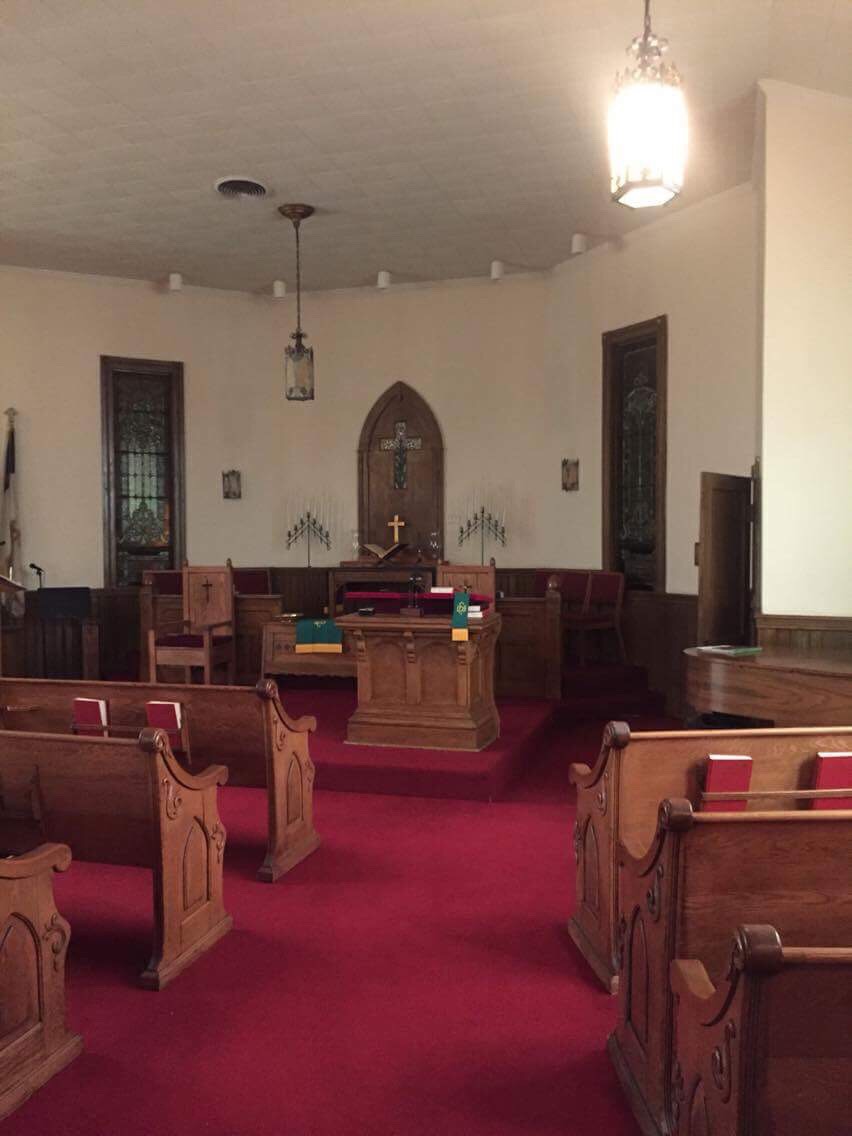 Example of the church's stained glass windows. Image courtesy of the author. 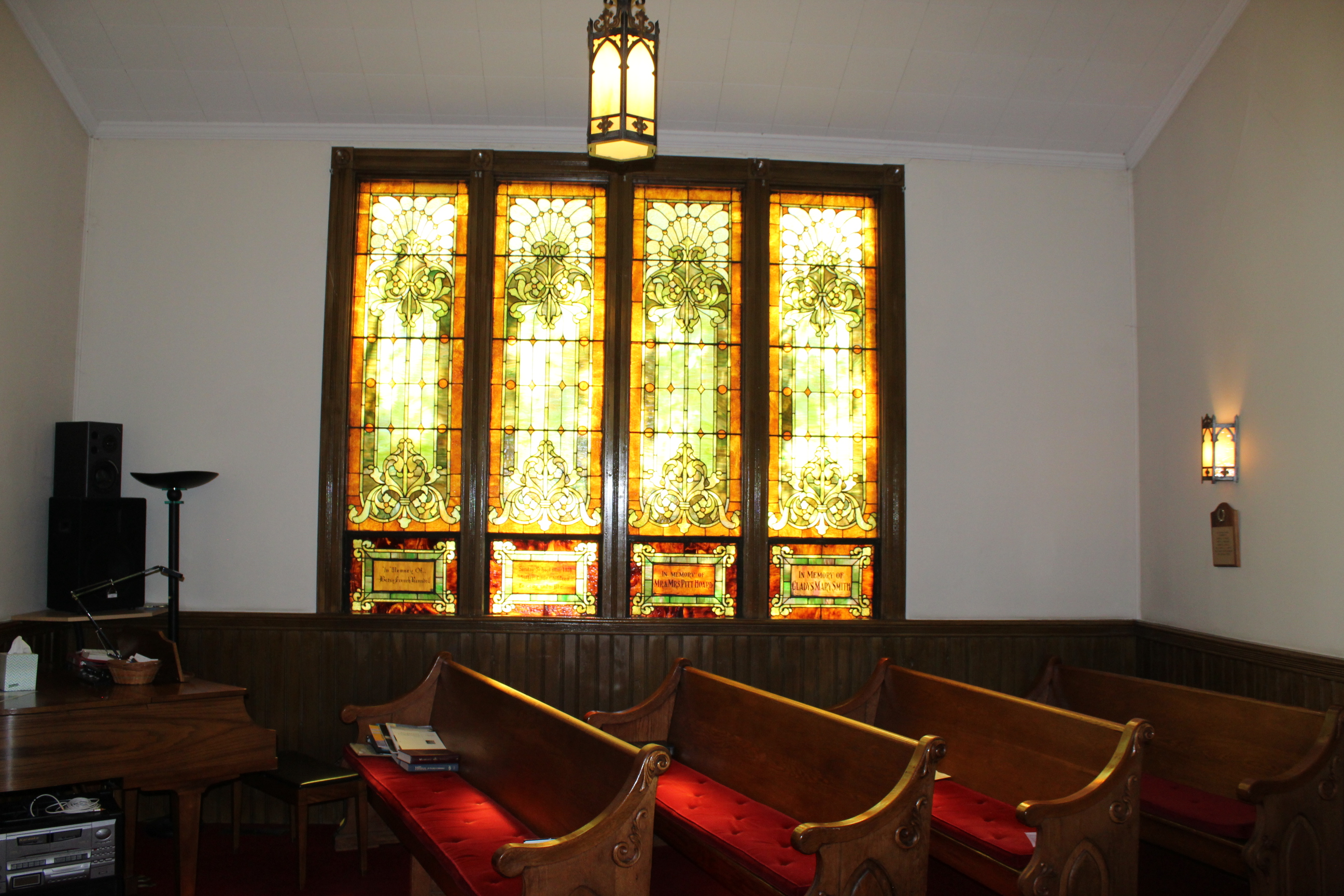 The First Congregational Church of Ceredo was established in 1874. It is the second oldest church in Ceredo, following the United Methodist Episcopal Church in 1866. It is also said to be one of only three Congregational churches in West Virginia. The current building, located on the northeast corner of First Street West and C Street, has been in continuous use since 1886. Its distinct appearance is modeled after churches in New England as homage to the original congregation’s New England roots.

The First Congregational Church of Ceredo, like all Congregationalist churches, has its origins in the Congregationalism movement. Congregationalism developed in England during the 16th and 17th centuries in protest against the Anglican Church. It stressed in particular the importance of freedom. Congregationalists, also known as Independents, believe that individual churches should be autonomous and independent of any outer hierarchy. Suffering persecution, many immigrated to America in the 1600s and established a large presence in New England.

Many of the first inhabitants of Ceredo were New England abolitionists who had been brought by Eli Thayer in the 1850s as part of his project to create a slave-free settlement in a southern slave state. The outbreak of the Civil War and the town’s subsequent destruction resulted in many of these people leaving. A few families did stay however, and the need arose for them to create their own church. The predominant religious groups in the community at the time were Baptists and Methodists; the New England settlers, on the other hand, were mainly Congregationalists. The Congregational Church of Ceredo was officially established on November 14, 1874. The charter members included Dr. John T. Wharton, Nelly Wharton, Capt. Mark Poore, Addie M. Poore, Catherine H. Osgood, George K. Osgood, Harvey Osgood, Emma Osgood, and Madison Bancroft. A Rev. Haines briefly served as the first pastor before being replaced by Rev. John McKeans.

The church originally held services in Crescent Hall (also known as Ceredo House or Thayer Hotel) in the 300 block East of B Street. In January 1883, a building committee was formed to plan construction of a proper church building. The Hoard family was very instrumental in the creation of the church. Charles Brooks Hoard donated the land for the church; architect and banker Floyd Hoard designed the building; and Pitt Hoard contributed logs from the family’s lumber mill for the church’s construction. The church was finished and dedicated on June 27, 1886. Accounts differ as to the origins of the steeple’s bell; some say it was donated by the Congregational Churches of Ceredo at the dedication, while a few say it was donated from a steamboat by its captain.

Floyd Hoard designed the church in the Queen Anne style, a popular architectural style primarily for wood frame houses in the late nineteenth century. Notable features included rounded shingles, a cross-gabled hipped roof, a prominent corner bell tower, and stained-glass sash windows. In 1926, the church expanded with the construction of an annex on the eastern side. Floyd Hoard and another architect, John Gieske, designed the addition and made the exterior blend in with the original portion as seamlessly as possible. The annex originally housed an auditorium, stage, and kitchen; later the stage was converted into office space.

“A Brief History of the founding and early years of the First Congregational Church, Ceredo, WV.” New Crescent. July 1999.