Rainelle is a small town in West Virginia with a population of 1,505 people according to the 2010 census. Used to be home to the world’s largest hardwood sawmill. The saw mill was tore down in 1975. U.S. route 60 runs through this small town. Rainelle is home to Cincinnati Reds pitcher Arnold Carter in 1944-1945. He finished the National League TOP TEN for winning percentages, shutouts, and saves. 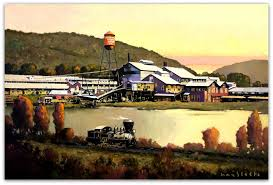 Over view of the town

Established in 1912, this building is thought to be the largest structure in the world built entirely of American Chestnut lumber. 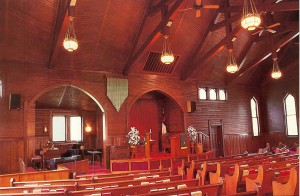 In 1906 Thomas and John Raine bought 100,000 acres of virgin hardwood. In 1909 they started to build their hardwood mill and then shortly after, they had the largest hardwood lumber mill in the world. 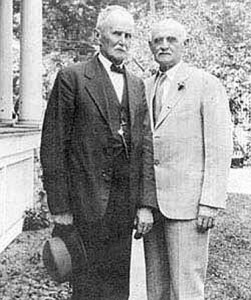 Thomas and John Raine created the railroad by building a spur line, which made the Sewell Valley Railroad which connected to the C&O in 1907. The Raine brothers logging railroad used the same Shay engines that are now at Cass Scenic Railroad. 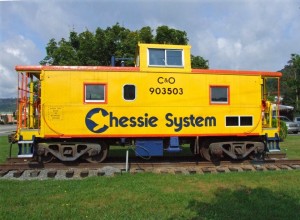 Brothers Thomas and John Raine are the founders of Rainelle. They began purchasing the entire valley and its surroundings in 1906. In 1909, with over 100,000 acres of virgin hardwood at their fingertips, they began building a lumber mill. It did not take long for the Meadow River Lumber Company to become the largest hardwood lumber mill in the world. Following the founding of the lumber mill, the brothers began to build houses, a school, hotel, theater, fraternal lodge, bank, golf course and Methodist Church to be used by their employees.

By building a spur line, the Raine brother brought in the railroad. They formed the Sewell Valley Railroad that in 1907 connected to the Chesapeake and Ohio Railroad. The Shay engines that are now at Cass Scenic Railroad are the same engines used by the brothers logging railroad.

The Meadow River Lumber Company operated from 1906 to 1975. It was the largest sawmill in the world and had three 9 foot band saws under just one roof. Peak production occurred in 1928. The 500 employees cut 3,000 acres of virgin timber a year and produced 31 million board feet of lumber.

The Rainelle United Methodist Church was established in 1912. The structure is believed to be the largest structure in the world to be constructed entirely of American chestnut lumber.

The Meadow River House was constructed by the lumber company in 1928.  The small building was used to showcase for the companies trims, moldings, and flooring during the Greenbrier Valley Fair in 1928. The building is still used for featuring museum displays by the fairgrounds during the yearly state fair week. The style of the Meadow River House displays the building materials produced by the lumber company, and what were popular features of homes during the time.

Every year on Memorial day, hundreds of veterans, known as the bikers, make a stop in this town for the weekend and enjoy the rich history of the town.