The Page-Vawter House is a 19th century Victorian home in Fayette County that was built by the Hawks Nest Coal Company and served as the home of the company's president and general manager. The property has been listed on the National Register of Historic Places since 1985. 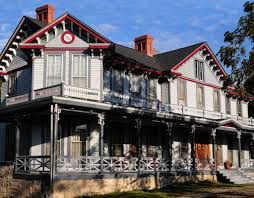 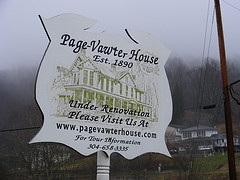 The Page Vawter House is a historic home located in Ansted, WV. It is a Fayette County landmark that has lasted for over 120 years and was built by Architect William Minter who designed the home in a Victorian style. It was listed on the National Register of Historic Places in 1985. The property was placed on the register for its significance of 19th century Victorian architecture. The house was established in 1890 and first occupied by William Nelson Page. He was an engineer from Virginia who worked for the Chesapeake & Ohio Railroad. He traveled throughout West Virginia several times while completing the rail line through the New River Gorge. During his travels in West Virginia Page befriended David Ansted, who was an English geologist and surveyor. They would remain friends.

Page made a name for himself as a man who could get things done. He was hired by the Hawks Nest Coal Company to engineer the construction of a narrow gauge railroad from Ansted to the main line of the C&O Railroad. He completed this project faster and cheaper than expected and was thought to be a man of great importance. He was appointed by the Board of Directors of the Hawks Nest Coal Company to serve as the company manager. He was a great asset to the company and was an important factor in its success. The company was reorganized as the Gauley Mountain Coal Company in 1884. The company built an elaborate mansion for its president and general manager in the town of Ansted in 1890.

The house was originally built in an L-shape Victorian style that was laid on a cut stone foundation. The home has two stories with a wrap-around veranda that made it a marvel for its time. The exterior of the house is adorned with fifty-two, eight foot tall, double hung windows, and five chimneys. The interior of the house is paneled and floored with oak. The window facings are made of solid walnut. The mansion was so large that it required eleven fireplaces to heat it efficiently. Every fireplace has a ceramic tile hearth and carved Victorian mantels of cherry, oak, and walnut. It is said to be one of the foremost landmarks in south-central West Virginia. It is one of the most distinguishable landmarks in Fayette County.

Page retired in 1917 and moved to Washington, D.C. The home was divided into two and renovations were completed. The home stood empty for several years until it was offered to Captain John Vawter. He managed the company store in Ansted. Page had been Vawter’s boss, and they had been friends for years.  He was already familiar with the house, so he and his family rented half of the house. He lived there until he died in 1928. His son and daughter continued to live at home. The siblings eventually bought the house and lived there until they died. The house remained in the hands of David Fox a descendant of Captain John Vawter.