This historical marker preserves the history of a skirmish that occurred between Union and Confederate forces as they vied for control of strategic transportation and communication routes through the Kanawha Valley. Both Confederate and Union forces considered the wooden covered bridge that was located here to be strategically important because the James River and Kanawha Turnpike linked the area to the Ohio River. Pushed by the Union to retreat from the area, Confederate forces burned the bridge in 1861 to halt the Union force from following them. 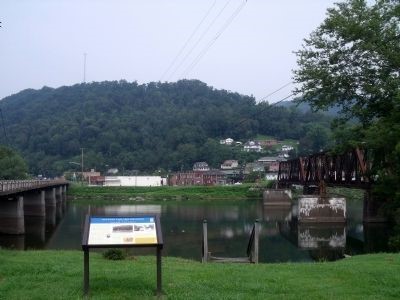 Historical landmark citing the union of the New and Gauley Rivers as well as pointing at the piers that still stand from the Bridge that Confederate troops destroyed in 1861. 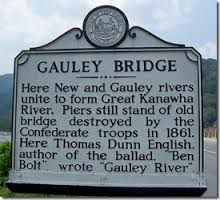 Original bridge burnt by Confederates as they retreated to White Sulfur Springs to halt the union advancement. 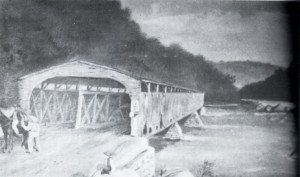 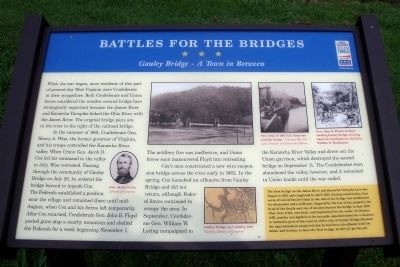 The inscription located on the marker offers a concise account of the battle. The inscription states, "In the summer of 1861, Confederate Gen. Henry A. Wise, the former governor of Virginia, and his troops controlled the Kanawha River valley. When Union Gen. Jacob D. Cox led his command to the valley in July, Wise retreated. Passing through the community of Gauley Bridge on July 26, he ordered the bridge burned to impede Cox. The Federals established a position near the village and remained there until mid-August, when Cox and his forces left temporarily. After Cox returned, Confederate Gen. John B. Floyd posted guns atop a nearby mountain and shelled the Federals for a week beginning November 1. The artillery fire was ineffective, and Union forces soon maneuvered Floyd into retreating.”

This skirmish was part of a campaign that offered one of the few bright spots for the Union army during the early stages of the war. General Jacob D. Cox successfully cleared the Kanawha Valley of Confederates, and these small victories in western Virginia offered Union supporters some hope in lieu of the demoralizing loss at the Battle of Bull Run. While the Union had some success in the West as well, the nation waited to see if George McClellan's army could take the army to the Confederacy--or even defend Washington from possible attack.

Cox assigned the task of rebuilding the bridge to the 11th Ohio Infantry, a unit that gained a reputation of being highly-skilled bridge builders during the Kanawha Valley Campaign.  The 11th Ohio Infantry constructed a new wire suspension bridge that could ferry men and munitions across the river. This hastily constructed wire bridge reflected the perception that creating a complete bridge across the river's 350-foot span would divert resources of time and material.

In the spring of 1862, Cox launched an offensive from Gauley Bridge and did not return, although Federal forces continued to occupy the area. In September, Confederate General William W. Loring launched an offensive in the Kanawha River Valley and drove out the Union garrison. Prior to their retreat, Union men destroyed the wire bridge on September 11, 1862. The Confederates soon abandoned the valley, however, and it returned under Union control until the war ended.

1.  On the left is a portrait of "Gen. Jacob D. Cox" Library of Congress

2.  On the top center are "Two views of 1862 U.S. Army suspension bridge — Courtesy    West    Virginia Division of Culture and History

3.  On the bottom center is a map of "Gauley Bridge and vicinity, 1861" Courtesy Library of Congress
4.  On the upper right is a drawing with the caption, "Gen. John B. Floyd’s artillery shelling Gauley Bridge, drawing based on contemporary sketch by William D. Washington"