The DuPont Belle Plant was a subsidiary of the E. I. DuPont Company built in 1925. Spanning over 90 years, the Belle plant would be involved in pioneering over 120 different chemical processes, including the synthetic polymer nylon. The plant was known for it's high pressure chemical engineering, which allowed it to be the first to produce high-pressure-process ammonia in North America.

The Ammonia Department of the plant in February of 1938. 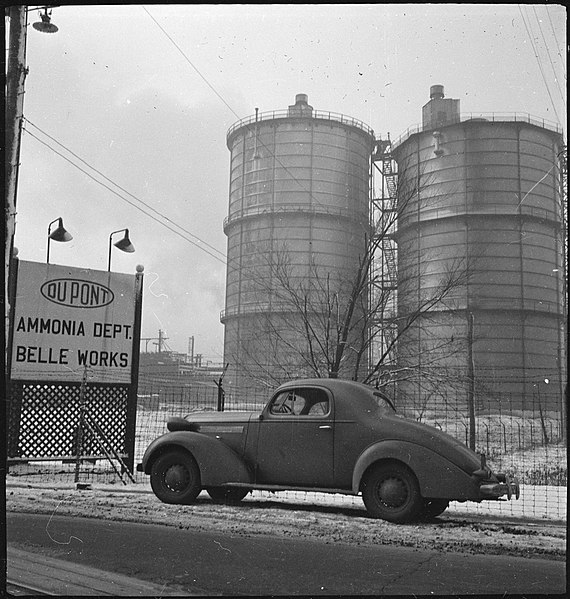 The signature giant mechanical compressors, known as the "hypers." 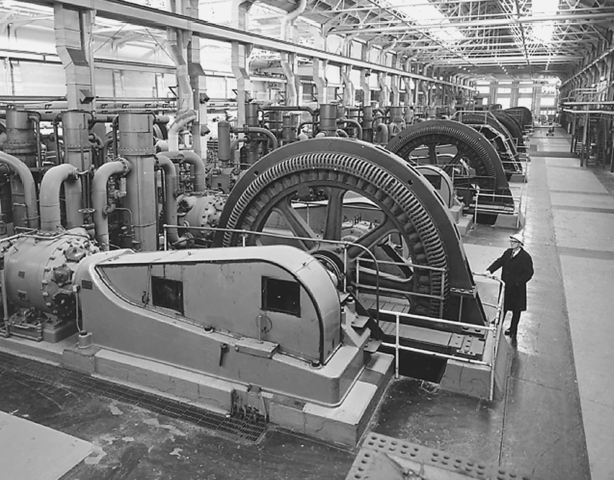 Groundbreaking on the E. I. DuPont company's Belle plant would occur in 1925, with plans to begin manufacturing ammonia with technology developed by Germany during World War I. The DuPont plant at Belle was to be an experimental plant, one capable of generating high pressure. The plant would be fitted with giant mechanical compressors called “hypers” that could achieve pressure up to 15,000 PSI. One of the primary ingredients in the production of ammonia is coke, which is produced through the destructive distillation of bituminous coal. This made the ideal location of the plant around the bituminous coal fields, of which West Virginia has plenty, so Belle was a good location for the needs of production.

The DuPont Plant at Belle would be the first to use a high-pressure process to produce ammonia in North America. The production of ammonia provided for the raw materials for numerous chemical products, particularly the first commercial methanol.  Ammonia allowed for new products, but the unique usage of combining coal gas and other chemicals along with the high pressure hypers was aided in the production for a plethora of new creations, among them being nylon and urea. Both urea and the technology to develop nylon would be the first in the nation. The synthetic urea DuPont produced would be used for plastics and was particularly important for fertilizers, as urea is an excellent source of nitrogen for crop production.

The DuPont Belle Plant was instrumental in nylon production as many of the key ingredients of nylon required the use of high pressure, one of the distinguishing features of the Belle hypers. In combination with other departments at DuPont, Belle significantly contributed to the production of nylon. In fact, all nylon used by the U.S. forces during World War II would come from chemicals produced in Belle. Initially nylon was sold as ladies’ hosiery, but by 1942 nylon had switched almost entirely into war production. Nylon was used for a myriad of war products: shoe laces, ropes, fuel tanks, flak jackets, netting, hammocks, and parachutes among other things. Lucite, a form of plastic produced at Belle, was used for the canopies of Allied planes.

Post-war demands skyrocketed for Lucite, urea, and nylon. DuPont had returned to selling nylon stockings, and demand was enormous. This was the peak for Belle Works, as it employed up to 5,000 people at this point. However, over the next couple decades, Belle Works would start to decline for a few reasons. By 1959, the plant switched from using coke to natural gas. As this switch occurred, other plants became more viable for ammonia production, and in 1978 the plant stopped producing ammonia altogether. Throughout the 1960s all of DuPont’s plants would begin to experience an increase in competition from new chemical manufacturers, both at home and abroad in Europe. Along with this was the overexposure nylon had received in the previous decades. Consumers in the 1960s began to turn towards natural fibers, and the market demand for nylon would drop.

This lull in demand would turn into a lull in production for the plant, and in combination with automation, the plant has reduced employment to about 580 workers today. By 1998, the once groundbreaking hyper compressors were sold for scrap, despite local efforts to preserve them for historical purposes. In 2014, DuPont Belle Works transitioned into a spin-off company known Chemours Company. In addition to Chemours, other tenants at the Belle plant currently include Kureha, Optima Chemical Group, and Sentinel Transportation. In its history, DuPont’s Belle plant would have developed more than 120 different chemical processes. Companies at the plant continue to produce chemicals and plastics, as well as facilitate the transportation of oils and petroleum coke.