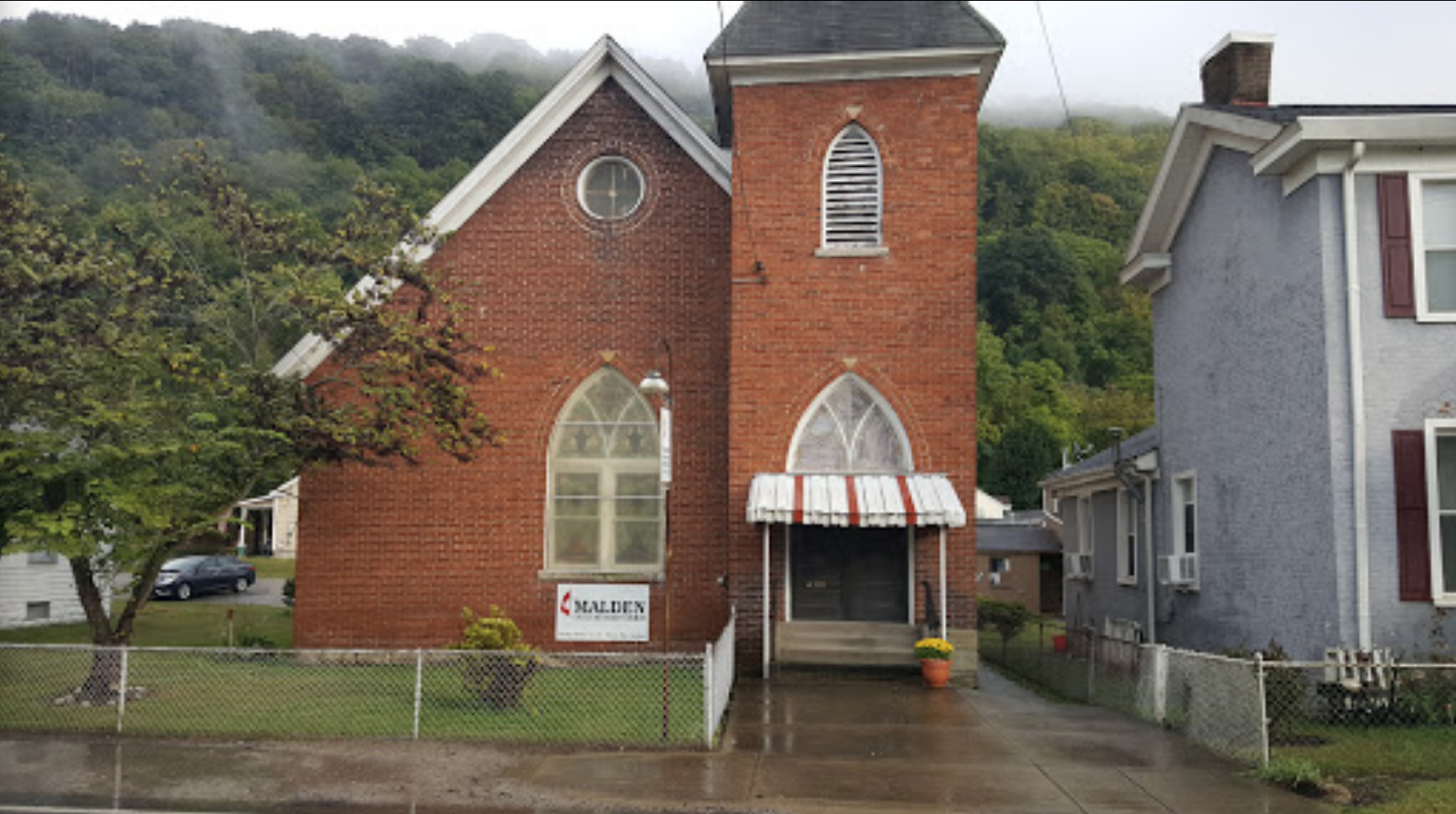 Front of Malden Methodist Church, circa 1980

Malden Methodist Church, from northwest, circa 1980

Malden Methodist Church, from west, circa 1980

When West Virginia was founded in 1863, the Methodist Church had the greatest number of congregations in the new state. The first Methodist preaching in what would become West Virginia was likely in the Shenandoah Valley as early as 1775, and two Methodist circuits were established in the area of West Virginia in the 1780s. Circuits were the geographic routes that Methodist preachers, called circuit riders, traveled between different congregations. A circuit rider might be appointed to a particular circuit for up to a year before he moved on to another circuit. This system worked well in sparsely-populated western Virginia, as preachers could travel between small communities on the same circuit and serve multiple congregations at once. With the Second Great Awakening in the early part of the nineteenth century, Methodism gained additional traction in West Virginia, though the growing congregations eventually ran into differences that led to schisms. In 1830, the Methodist Protestant Church emerged from differences over the authority of the bishop and the role of the laity, and in 1844 the Methodist Episcopal Church, South was created due to disputes over slavery.

Methodism came to the Kanawha Valley at the turn of the century with the formation of the Little Kanawha Circuit in 1799 and the first Methodist sermon given by Reverend William Steel in Charleston on January 1, 1804. At the time, the Kanawha Valley was in the early stages of industrial development, as settlers had begun to harvest brine from the area’s abundant salt springs and ship it up the river to meat-packing facilities in Cincinnati. The valley’s salt industry rapidly flourished, and the town of Malden soon emerged as its mercantile and residential center. Several churches were constructed to serve the growing community’s spiritual needs, including Malden Methodist Church, which was built as early as 1840. Although little information is available about the church’s founding, it was nevertheless one of Malden’s earliest religious buildings and formed part of the Malden Circuit of Methodist churches.

Although it was built during the heyday of the Kanawha Valley’s salt industry, Malden Methodist Church soon witnessed the devastation of the Civil War and the steady decline of the salt business that followed it. During the war, the Methodist Episcopal Church took a particularly active role in defending the Union and championing West Virginia’s statehood. Ministers used their influence to shape their congregations’ political loyalties, urging their followers to support the Union by distributing pamphlets, excluding secessionist sympathizers from their fellowship, and recruiting for the Union army. At the same time, the pro-Confederate Methodist Episcopal Church, South, maintained a strong influence in the Kanawha Valley, where the majority of the saltworks’ laborers were slaves. Indeed, by the start of the Civil War, Kanawha County possessed the third highest proportion of slaves in all of West Virginia. As a result, the conflict between the two Methodist churches, each supporting a different side in the war, was particularly contentious in the valley. Although little is known about Malden Methodist Episcopal’s own role during the war, local histories note that troops may have used the church building as a stable. Shortly after the end of the war, perhaps as a result of the conflict, the church’s ownership changed when its trustees deeded the church to a man named Charles Ferrel in 1867.

In 1911, Malden Methodist Episcopal Church was extensively remodeled. Reverend Joseph S. Jenkins was the church’s pastor during these alterations. Although much of the church’s appearance was altered, including its facade, the newer building retained the original windows and a few of the interior furnishings and woodwork from the previous structure. In 1980, Malden Methodist Episcopal Church was included in the Malden Historic District, which is listed on the National Register of Historic Places. Despite the alterations that took place after Malden and the Kanawha Valley salt industry’s peak, the church was included in the district because it was consistent in scale with other Malden churches and continues the traditional use of the site. Along with the Methodist Episcopal Church, several religious buildings remain from Malden’s nineteenth-century heyday, including Kanawha Salines Presbyterian Church, the valley’s oldest Presbyterian church, and African Zion Baptist Church, considered the mother church of West Virginia’s Black Baptists. Together, these churches stand as evidence of the religious communities that developed alongside the industry and commerce of the Kanawha Valley.