Located in Daniel Boone Park in Charleston, West Virginia, the Joseph Ruffner Log Cabin or “Rosedale” originally stood at 1538 Kanawha Boulevard. Built in 1803 by Joseph Ruffner, the log cabin is said to be one of the oldest extant houses in Kanawha County. 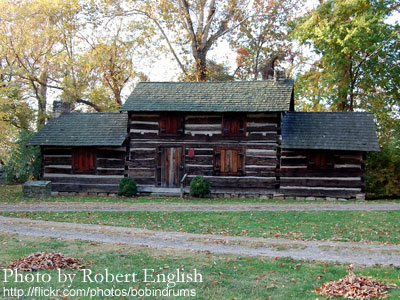 Peter Ruffner, a Swiss immigrant, arrived in America in 1713. He and his wife, Mary Steinman settled in Shenandoah Valley, in Virginia where they started their family. It was their eldest son, Joseph, that settled in Charleston, WV. Joseph Ruffner, a successful farmer and businessman, traveled the region, buying and selling produce and livestock. Searching for iron ore in the upper James River, he met Colonel Dickerson of Point Pleasant, and learned of the buffalo salt licks on the Kanawha River. He bought Colonel Dickerson’s land that spans 502 acres and has salt licks on the spot.

In 1795, Joseph finally saw the land he bought. So impressed, Joseph went on to buy all the land that he could, over a thousand acres that included log structures of Fort Lee, unsold lots of the young town and all the bottomland surrounding the Fort, much of what is now the city of Charleston. He sold his property in the Shenandoah Valley upon his return to Virginia, and moved his entire family to the Kanawha Valley late in 1795.

Ruffner built the log house to serve as a sawmill and office for his business, but by the 1820’s the hand-powered sawmill was no longer needed. His grandson, Joel Ruffner, moved into the log house upon his marriage and renovated the log house in the 1820s and '30s. More rooms were added to the dwelling beyond the original log structure, and the logs were covered with clapboard siding. A 25,000 gallon stone-lined cistern was dug adjacent to the house! This would have been filled with fresh rainwater to provide a clean water source for the family instead of relying on the dirty Kanawha River that was polluted from early industry.

The Ruffners called the newly refurbished home “Rosedale.” The family raised 12 children in the house. An interesting Ruffner family tradition recounts that the Ruffners would plant a holly tree upon the birth of each child. Thus on old Ruffner property in the valley, one will see many ancient holly trees still surviving.

In the 1860’s, during the Union occupation of Charleston, Rosedale became the headquarters of then Colonel )later General) Joseph A.J. Lightburn, commander of the 4th (West) Virginia Infantry. Substantial earthworks were apparently built around the building. On September 13, 1862 the Union Army, in the face of advancing Confederate troops, evacuated Charleston. Rosedale suffered damage in the action and was reportedly struck with several cannon balls. The building survived the Civil War and passed from generation to generation until the late 1960s when the last Ruffner descendant died and Rosedale passed out of family hands.

The historic log cabin was dismantled when Rosedale was demolished to make way for modern construction on Kanawha Blvd. and the logs were stored for several years.  Then, volunteers rebuilt the cabin as part of the 1976 Bicentennial project of civic clubs in the area. Although the original Ruffner home was torn down in 1969, some furniture is on display inside the Craik-Patton House. In the early 21st century the city of Charleston turned over the Ruffner Cabin and the property it stands on to Craik-Patton Inc.