Operating from 1846-1915, Olive Furnace was one of the longest operating iron ore furnaces in Southern Ohio. This furnace was built by John Campbell, known by many as the "Father of Ironton." Olive Furnace was able to produce sixteen tons of iron per day making this one of the most productive furnaces in Southern Ohio. Local legend also states that the furnace served as a place of shelter for those escaping slavery and traveling through the area in the years leading up to the Civil War. The furnace also produced and sold iron to the United States Army during the Civil War that was used in the creation of rifles.

Historical Marker at the site of the Olive furnace 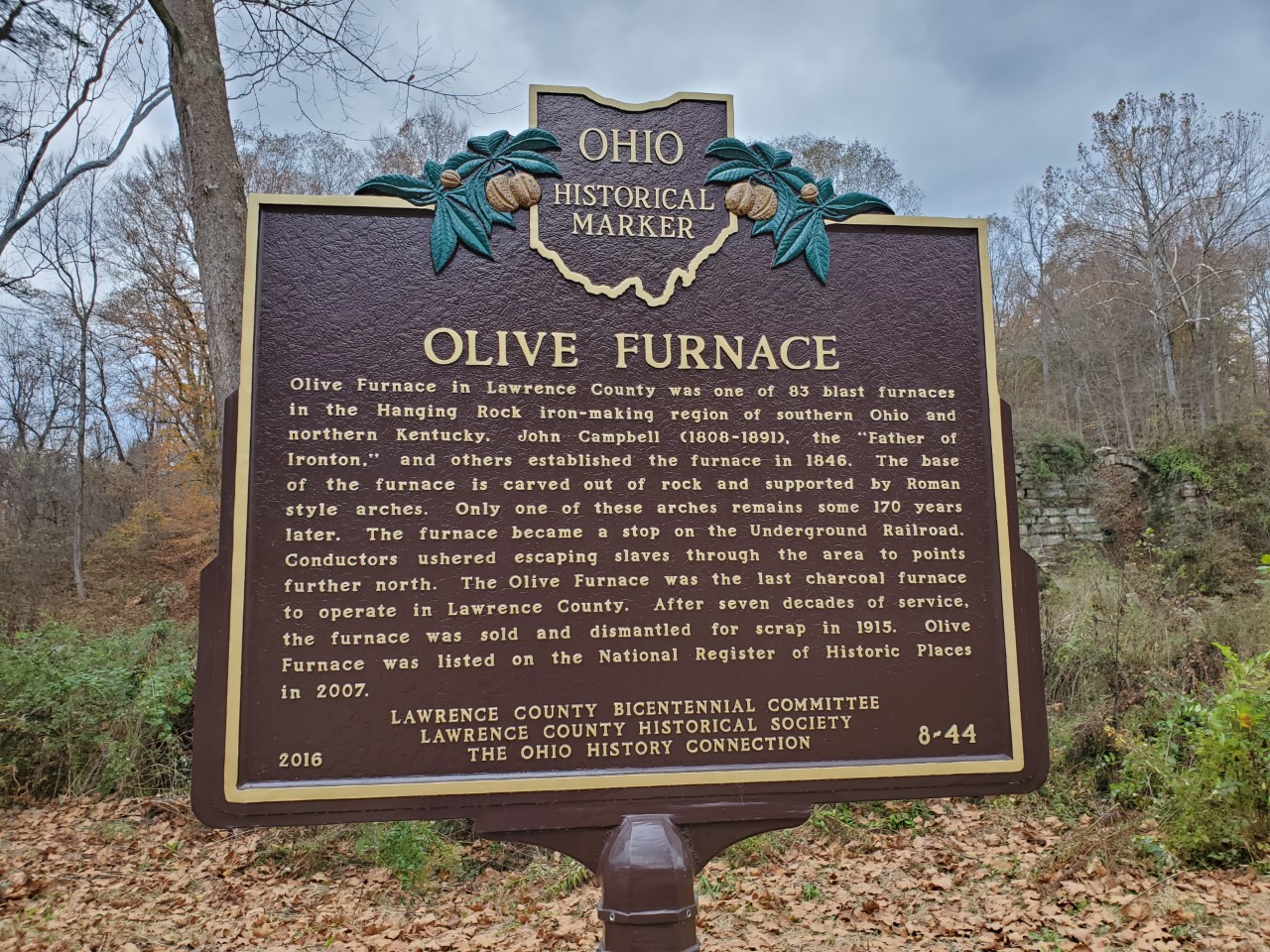 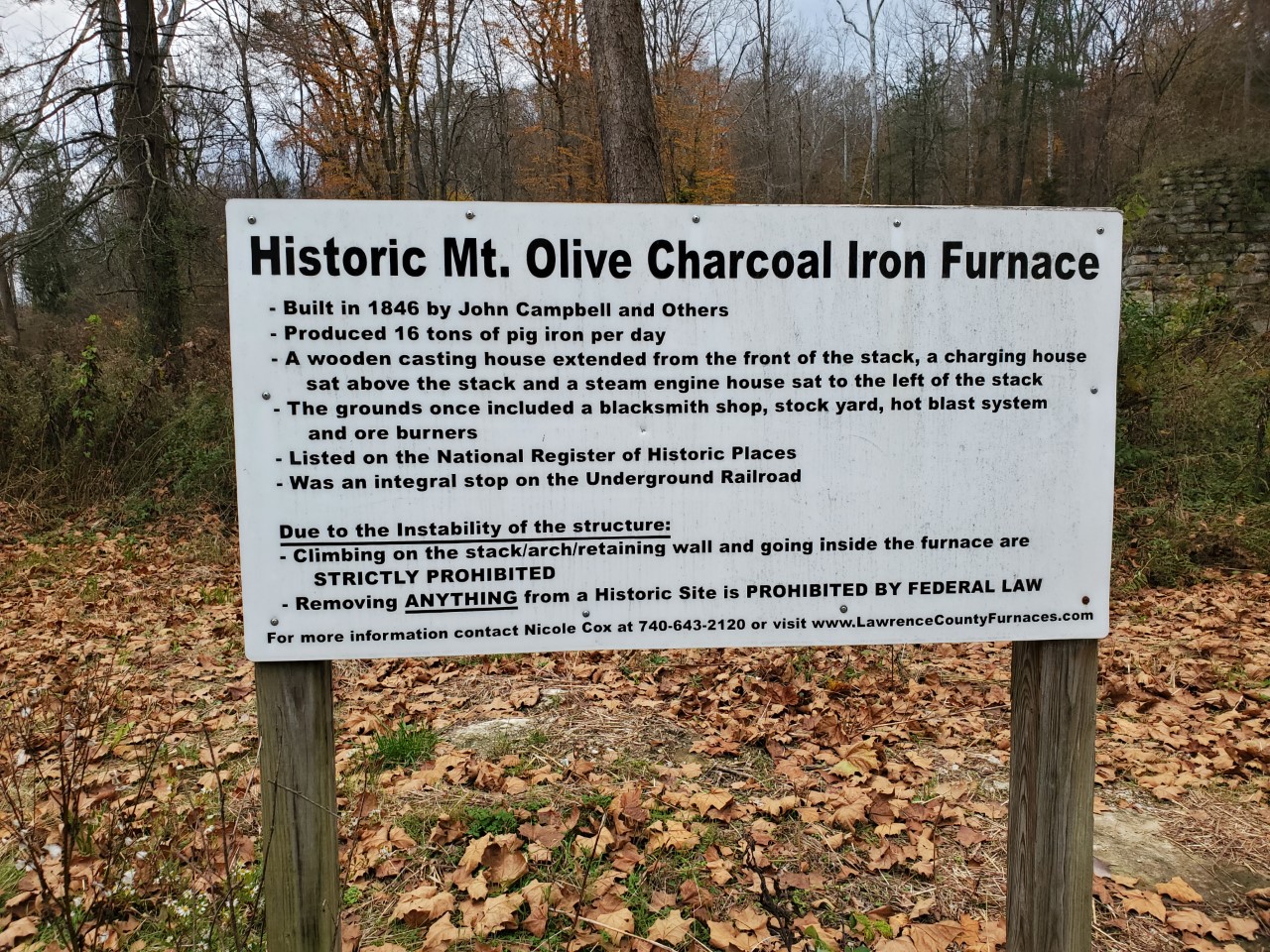 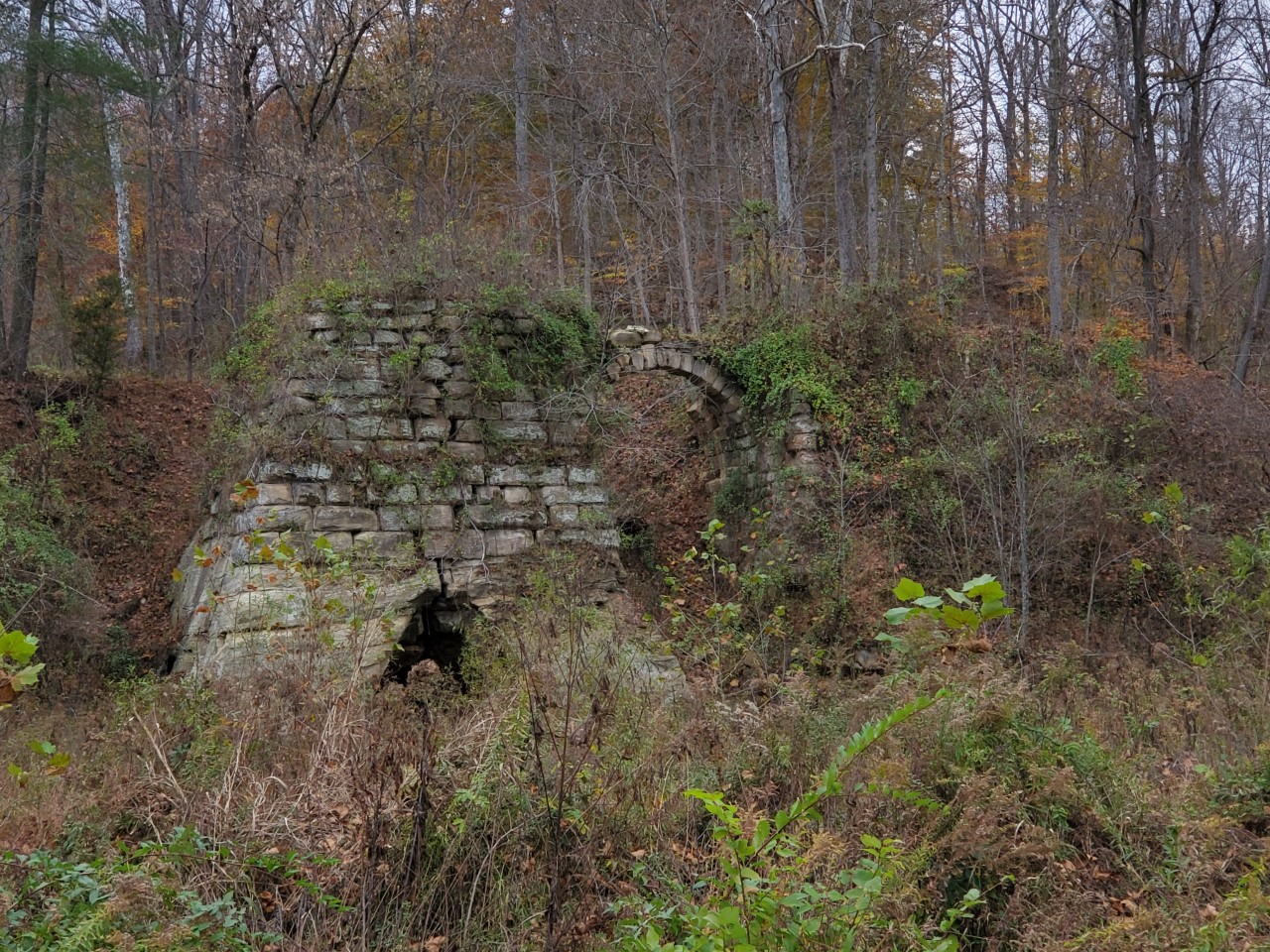 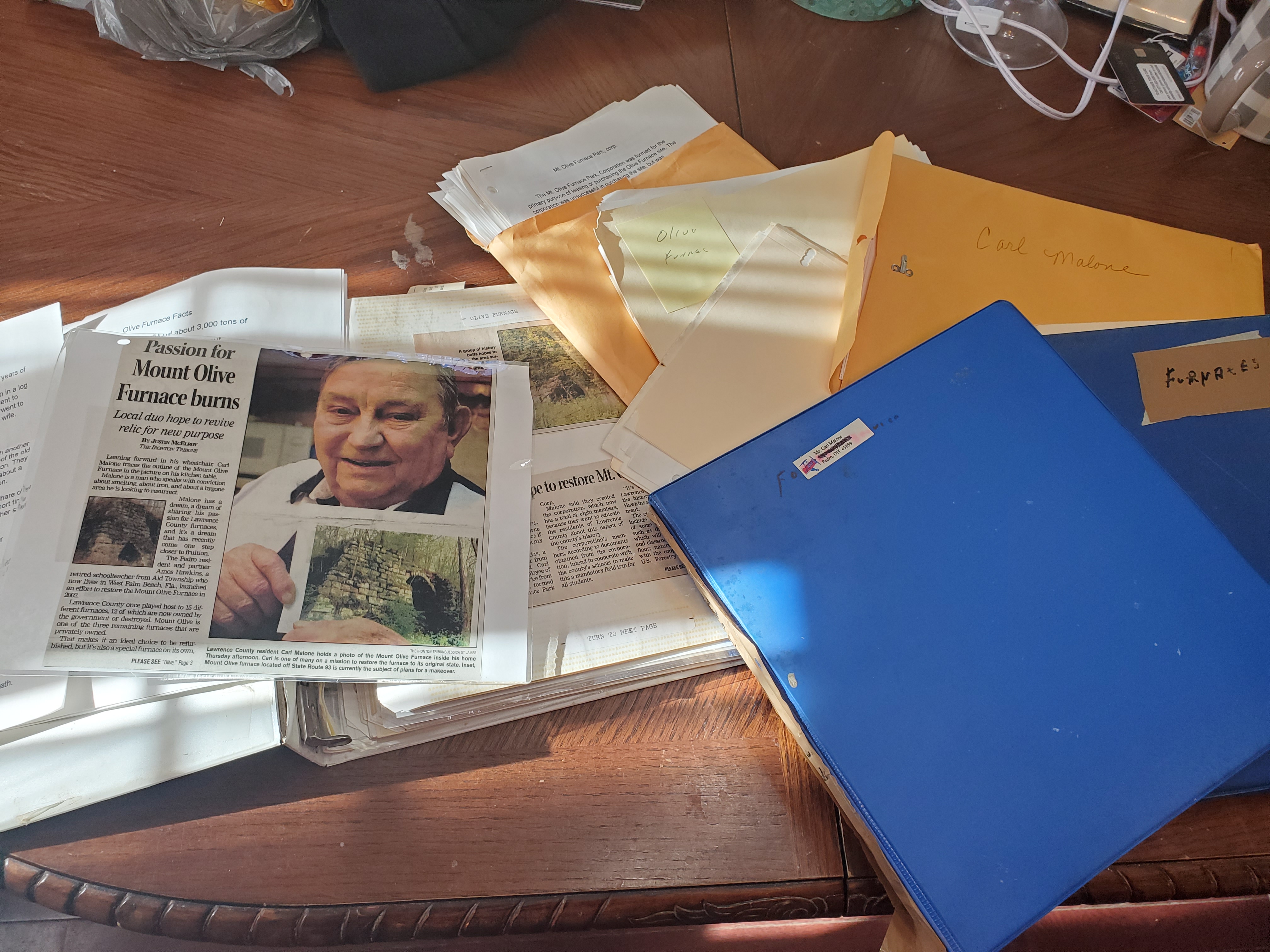 Olive Iron Furnace was constructed in 1846 by John Campbell and operated its first blast in 1847 when construction was completed. John Campbell owned many of the iron ore furnaces in Southern Ohio and is the person that is known as the "father of Ironton." Olive Furnace is the biggest iron furnace in Southern Ohio still standing today and was part of the U.S. iron industry region of the 19th century.

Olive Furnace was able to produce 3,000 tons of iron per year. To be able to produce that much iron, Olive Furnace had to be supplied 7,888 tons of ore, 11,370 cords of wood, and 411 tons of limestone each year. All materials were brought to the company store where they were weighed and credit given in the company records so the script could be issued. After weighing raw materials, they were carried to the stockyard and dumped. In the stockyards, all the raw materials had to be broken down to the correct size to be able to fit into the stockyard sheds. These materials would need to last from September to May each year. These nine months was the only time where iron furnace blasting could be done efficiently. It took about 300 acres of forest for every nine months to run the furnace.

To charge the furnace, a two-wheeled pushcart was used to transport ore, charcoal, and limestone to the furnace. The charcoal would be put on first, followed by the ore and limestone last. The furnace would be charged every thirty minutes and tapped every twelve hours. when the furnace was tapped, the iron would be collected and the furnace would then be charged again with a new batch of iron ore going into the furnace. The furnace could make up to sixteen tons of iron a day. Each Saturday at 12pm, the furnace would be banked and left that way until 12pm on Sunday. This was done to quench the furnace fire and preserve the coke in the furnace. To go along with the charging of the furnace, Olive Furnace had a steam whistle that blew to signal the last blast before closing for the summer or to signal that someone had been severely hurt or burned. The whistle also was used to signal a shift change to the workers. The final whistle of the southern Ohio iron industry would sound at Jefferson furnace in May of 1916.

The Company that controlled the Olive Furnace had a lot more buildings on the ground that the furnace set on. On the hill behind the furnace, there is the company cemetery where workers that died on the job and people of the surrounding countryside could be buried. Most of the graves cannot be seen nowadays, but one is still visible. This grave is enclosed within an iron fence and is believed to be the grave of one of the owners or managers of Olive Furnace. Across the road from the furnace, there were 4 main buildings. These buildings were the company store, two iron master's mansions, and the company church. Only the church stands today and is still used by the surrounding people today. The company that ran the Olive Furnace employed 300 men and allowed some of the families of the workers to build small homes on company land. None of these buildings are still standing today.

Along with the important role that Olive played in the iron industry of southern Ohio, legend states that the furnace played a very important role during the Civil War. The Olive furnace produced iron that was used for rifles for the union and was a stop on the underground railroad for escaped slaves. According to local history and legends, John Campbell rode in a large covered wagon between all of his furnaces. He would use this wagon to transport escaped slaves from one furnace to the next. The Underground Railroad was an informal network of safehouse and other places of refuge that made it possible for enslaved persons to escape from the Ohio River to various cities and other areas with the goal of many to reach Canada where they would no longer be subject to capture and re-enslavement owing to the terms of the Fugitive Slave Act of 1850. For those who reached places like Olive Furnace, each stop further north meant that they were closer to freedom.

Scrapbook obtained by Jason Haywood. Written and researched by Carl Malone in 2005.