It is the oldest beehive coke oven in the state of West Virginia, and the longest operational beehive oven in the nation. These 140 ovens are the last survivors of some 400 Elkins Coal and Coke ovens erected here early in the 20th century. They are built into the hillside directly below the dirt road leading into the complex, face southwestward toward the tracks of the B & 0 Railroad, and are divided into two batteries arranged in continuous single rows. 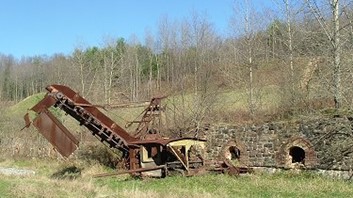 Coke is coal from which the volatile matter the tar, oils, and gas has been burned out, leaving mainly fixed carbon and the coke-making process is designed to drive off the volatile matter from the coal without letting combustion go far enough to burn the carbon. The origins of this process predate by many years the establishment of the Elkins Coal and Coke Company at Bretz early in the 20th century. Since the dawning of the iron age, man has needed sources of nearly pure carbon which, when properly heated, would take the oxygen out of iron ore and convert it into metal. For centuries charcoal served this purpose well, but by the early years of the 18th century, a shortage of wood for charcoal making in most industrial countries had inspired a search for a suitable substitute.

Most of the Bretz ovens date back to the complex's heyday between 1906 and 1919. They rest on raised earth platforms or wharfs. Their retaining walls are constructed entirely of hand-cut stone except at their round arched door openings where the intense heat and the need to quench the coke with water requires fire brick. The ovens, which have a diameter of approximately 12 feet and are 7 feet high, are constructed entirely of fire brick set in clay mortar. The dome shape of the top serves not only to make the structure more rigid but focuses heat more directly on the burning coal.

In the late 19th and early 20th centuries, the widespread adoption of cheap and plentiful coke made possible the expansion of the Nation's iron and steel industry into the world's largest. To feed the country's hungry blast furnaces numerous coke plants, like the one operating today at Bretz, were established wherever a suitable supply of high quality coal lay near a railroad line that could transport the product to market. The Bretz facility owes its origins largely to the entrepreneurial activities of Stephen B. Elkins, who had begun to acquire large coal tracts in the area in the 1890 f s and who in 1902 purchased the uncompleted Morgantown & Kingwood Railroad to fully exploit them. In 1906 his Elkins Coal and Coke Company acquired the town of Bretz and an adjacent coal mine from the West Virginia Coal Company and began to construct a bank of 400 coke ovens. Elkins 1 Bretz plant went into full production in 1907, shortly after the Morgantown & Kingwood Railroad was completed to a point on the B & 0. This new route gave the Elkins Coal and Coke Company an eastward connection to its chief customer the huge steel plant and shipyard of the Maryland Steel Company at Sparrows' Point, and between 1907 and 1918 huge quantities of coke were shipped from Bretz to this facility. In 1919 Charles M. Schwab's Bethlehem Steel Corporation purchased the Sparrows' Point Complex and 4 years later acquired the Elkins properties as well. Like most of the coking plants constructed in 19th-and-early20th-century America, the Elkins operation at Bretz utilized the beehive oven to produce coke. In fact, from 1871 to 1919 about 88 per cent of all iron produced in the United States was made with beehive coke as a fuel.

After World War I, however, the beehives were quickly displaced by more efficient by-product ovens which could recover gas and other valuable compounds. As a result, most beehive operations like the Elkins Plant were either shut down permanently or operated only during periods of peak steel production.

The Bretz ovens were probably the last beehive coke works in America to close down, in 1980. (A rectangular style coke works, similar to beehive ovens, operated in Alverton, PA until 1983.) The coke works was put into operation in 1906. Different operators owned the Bretz coke works over the years. A coal mine and coal camp were built there by West Virginia Coal Company before 1906. In 1906 Elkins Coal & Coke Co. acquired the mine and town, and began constructing the coke works. In 1918 Bethlehem Steel took over the Bretz town/mine/ovens, but only ran Bretz for three years. Later operators included Joseph Miller and Gibralter Fuel Co. In 1953 Mercury Coal and Coke Co. purchased the operations, which may have been idle at the time, from a bankruptcy sale. They revamped the coke works, but may not have reopened the mine, and operated it until 1980. After its closure, the site remained one of the most intact examples of a beehive coke yard. Despite it's listing on the National Register of Historic Places, much of the site has been reclaimed and many of the structures demolished, leaving Shoaf, Pa., 45 minutes to the north, as the finest extant coke works in the nation (although it has really deteriorated). This proves that a listing of a site on the Register is no guarantee that it will be preserved.