On April 30, 1927, a powerful explosion occurred at Federal No. 3 mine in Everettville, Monongalia County, West Virginia. At least ninety-seven miners lost their lives. In the wake of the tragedy, the West Virginia Department of Mines conducted an investigation into the cause of the explosion. It concluded that a spark from a storage battery locomotive ignited built-up methane and coal dust in the mine, causing the deadly explosion. The agency claimed that rock dusting could have significantly reduced the magnitude of the explosion. Mine executives at Everettville, however, refused to do so prior to the tragedy, believing that the mine was too wet for coal dust to propagate a methane ignition. 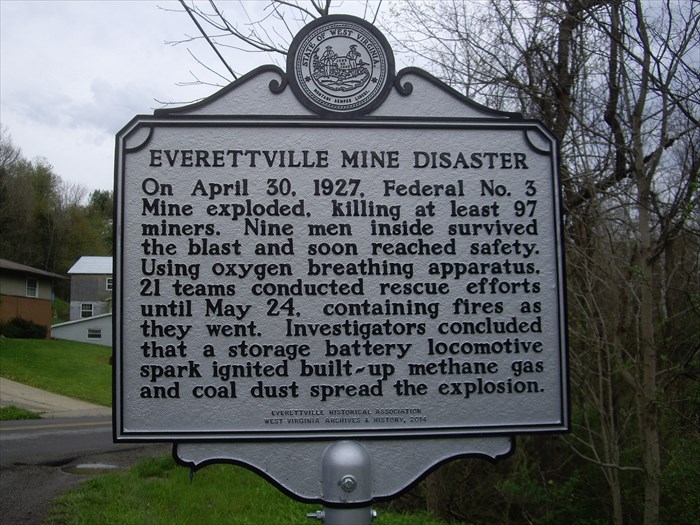 Tipple at Federal No. 3 mine after the explosion 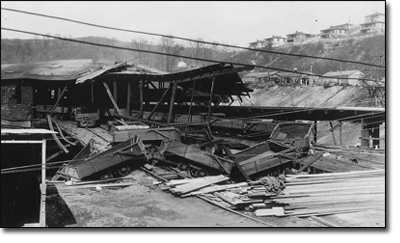 Message left by miner Henry Russell while trapped after explosion 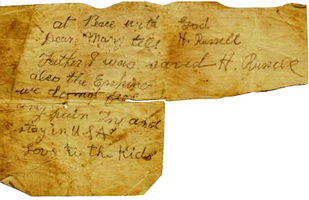 At 3:20 p.m. on Saturday April 30, 1927, a powerful explosion occurred at Federal No. 3 mine in Everettville, Monongalia County, West Virginia. The coal mine was owned by New England Fuel and Transportation Company. At the time of the explosion, about one hundred miners were underground. Eighty-six of them were killed instantly, while two initially survived the blast and managed to walk 500 feet before being overcome by the afterdamp, the toxic mixture of gases that lingers in a coal mine after an ignition of firedamp. Three miners barricaded themselves in a pump room and survived for three or more hours before being overcome by the afterdamp. Aware of their fates, the trapped men scribbled notes to their loved ones, which were later recovered by rescue teams alongside their bodies. One of those men was Scottish immigrant Henry Russell, who wrote a short message to his wife on a piece of cement bag paper. The force of the explosion also sent debris and flames out of the mine, causing the tipple (a large structure where extracted product was temporarily stored and then loaded for transportation) to collapse. The structure’s failure claimed the lives of six workers and injured several others. Nine miners who were working in a different section of the mine, far from the site of the explosion, barricaded themselves in a room. One managed to find his way out of the mine and return with others wearing self-rescuers (portable emergency oxygen devices) to save the lives of his eight co-workers.

News of the tragedy spread quickly. Families of the miners quickly raced to the site, hoping to hear good news concerning the fate of their loved ones. Additionally, thousands of spectators converged on the scene. Soon after, state police arrived and cordoned off area. Rescue teams quickly assembled to search for survivors. The still raging fire, coupled with the fear of another larger explosion caused by the afterdamp, however, severely impeded rescue efforts. Weeks passed before rescue crews could recover all of the miners’ bodies.

In the wake of the tragedy, the West Virginia Department of Mines conducted an investigation into the cause of the explosion. It concluded that a spark from a storage battery locomotive (an electric vehicle used to haul coal to the surface) operating at the farthest working face from the entrance ignited built-up methane (or firedamp) and coal dust in the mine, causing the devastating and deadly explosion. The agency claimed that rock dusting (the application of pulverized limestone to the inside walls of a coal mine) could have significantly reduced the magnitude of the explosion. Despite the insistence of safety officials to properly rock dust the mine, mine executives at Everettville refused to do so, believing that it was simply too wet for coal dust to propagate a methane ignition.

In 2014, the West Virginia Highway Historical Marker Program of the West Virginia Archives and History installed a marker to commemorate the Everettville mine explosion. Sponsored by the Everettville Historical Association, the marker stands at the intersection of U.S. 19 and County Route 45 (River Road), south of Arnettsville in Monongalia County.