Item 6 of 7
This is a contributing entry for Salisbury's Black History: Georgetown and Beyond and only appears as part of that tour.Learn More.

The relationship between Salisbury’s Black communities and the Wicomico County Courthouse is complicated. The courthouse was described as beautiful and the best in the state, yet Salisbury’s Black citizens did not experience the same law and order as its white citizens. While Frederick Douglass’ visit to the courthouse in 1880 was a bright spot for Salisbury’s Black and progressive communities, this was an exception. With two lynchings on the lawn, a separate back entrance for Black visitors, and the site of civil rights protests, the courthouse is fraught with memories of injustice and violence. Today, the city’s efforts to acknowledge past wrongdoings are evident by the Lynching Memorial historical marker, a collaboration with the Salisbury Lynching Memorial Task Force, and the Equal Justice Initiative. Unveiled in May 2021, this marker honors the lives of the three Black men murdered by white lynch mobs in Salisbury and is the first step towards healing and reconciliation between the city and Black citizens.

The Wicomico County Courthouse pictured in October 2021. (Photo by Allison B. Stancil) 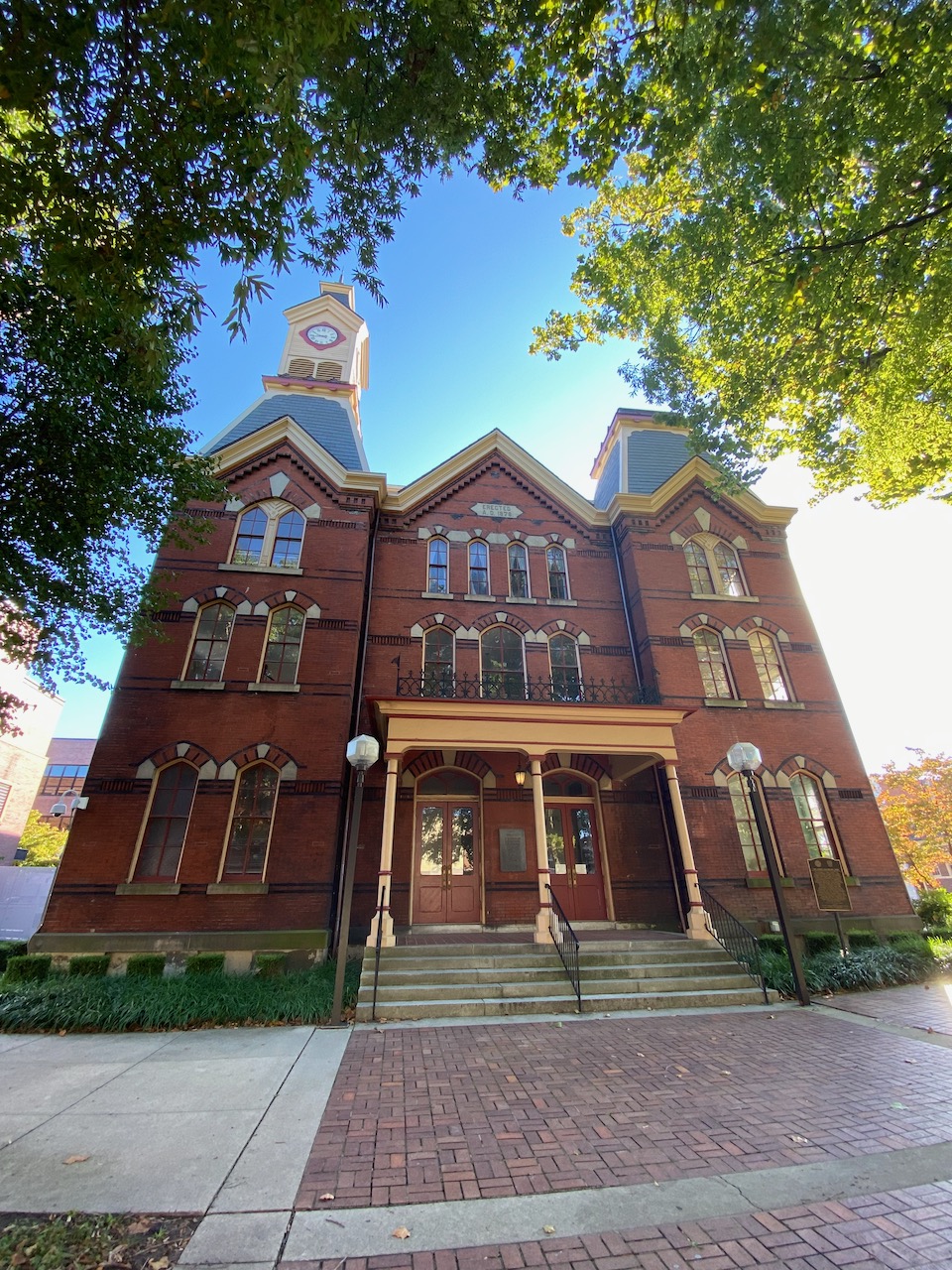 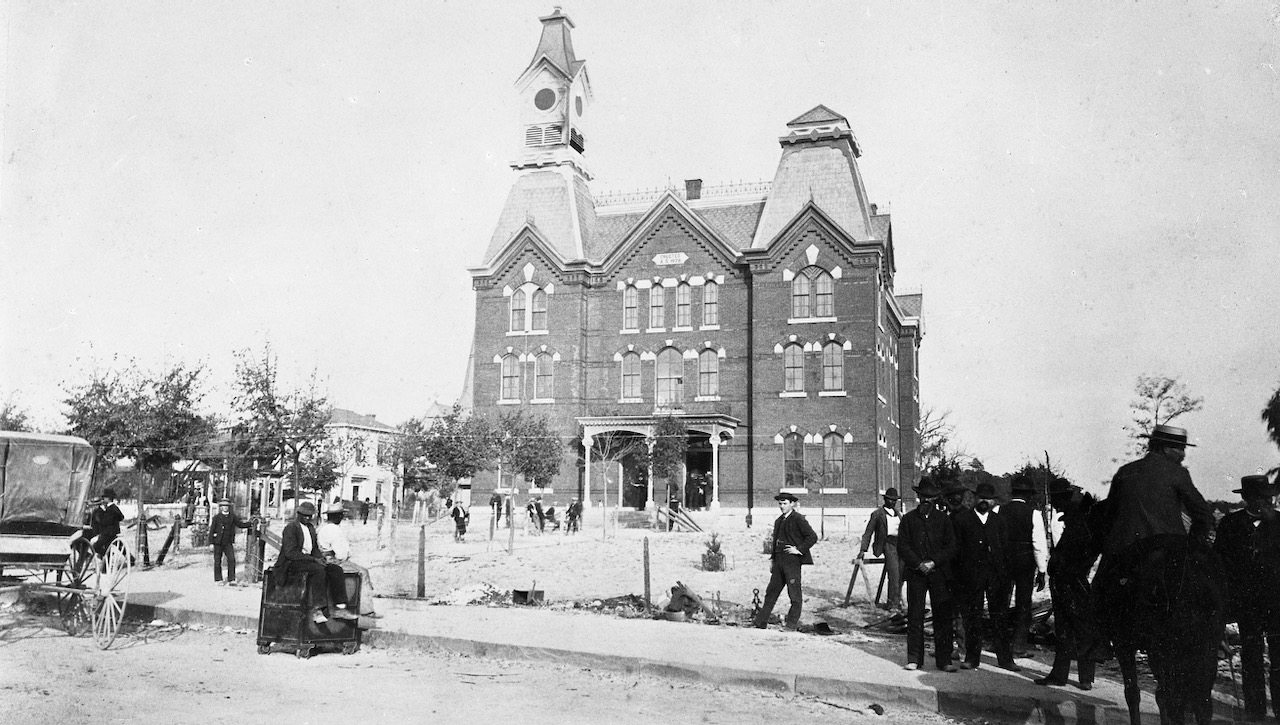 The front page of the Baltimore Afro American after Matthew Williams was lynched in Salisbury on December 4, 1931. (Linda Duyer African-American History Collection 2012.021) 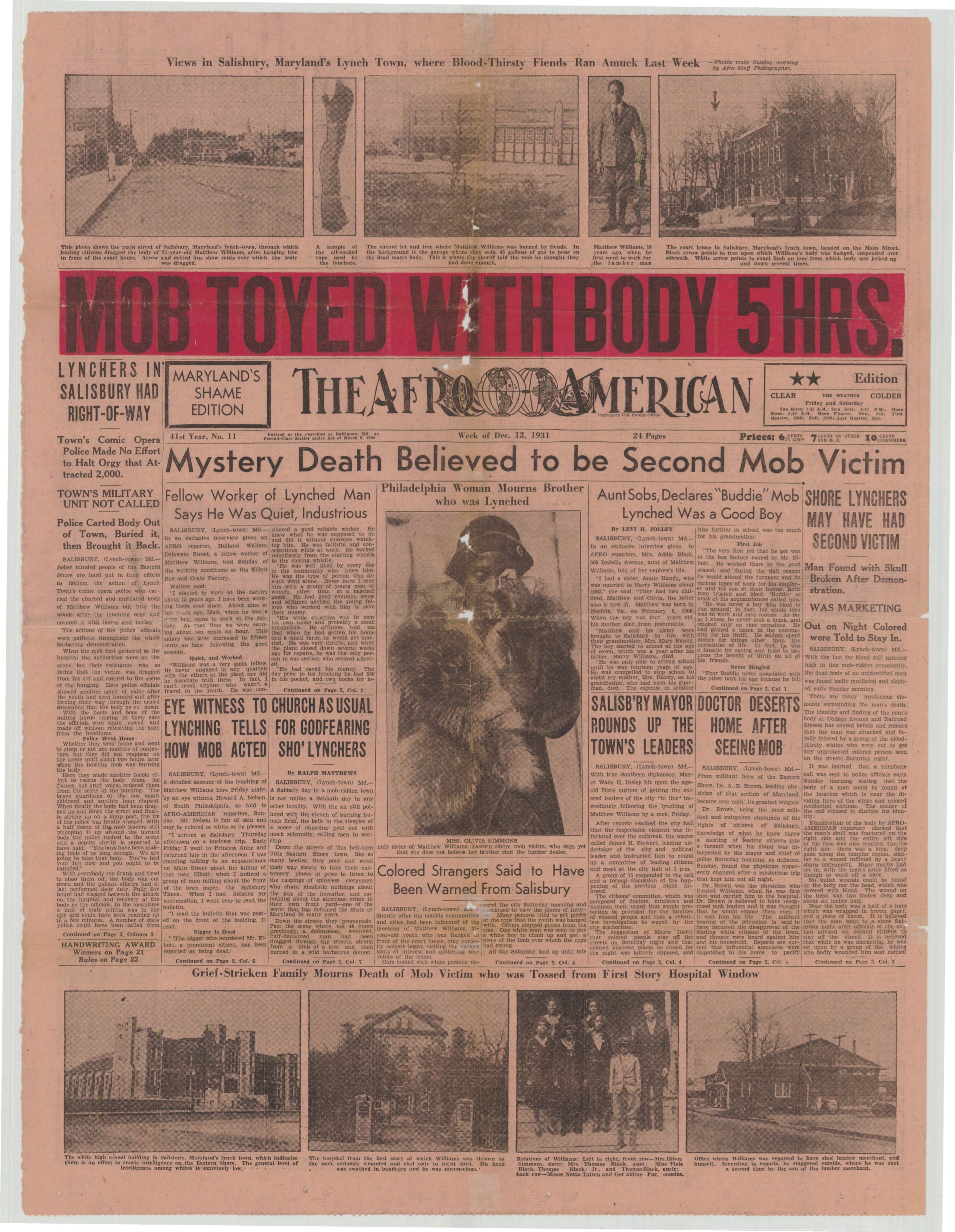 Cambridge Movement Leader Gloria Richardson leaves from the back entrance of the Wicomico County Courthouse into a large crowd of people and police officers in May 1968. The crowd is likely gathered in protest of Daniel Henry's shooting death by a Salisbury police officer. (Walter Thurston Photograph Collection 2016.096.617) 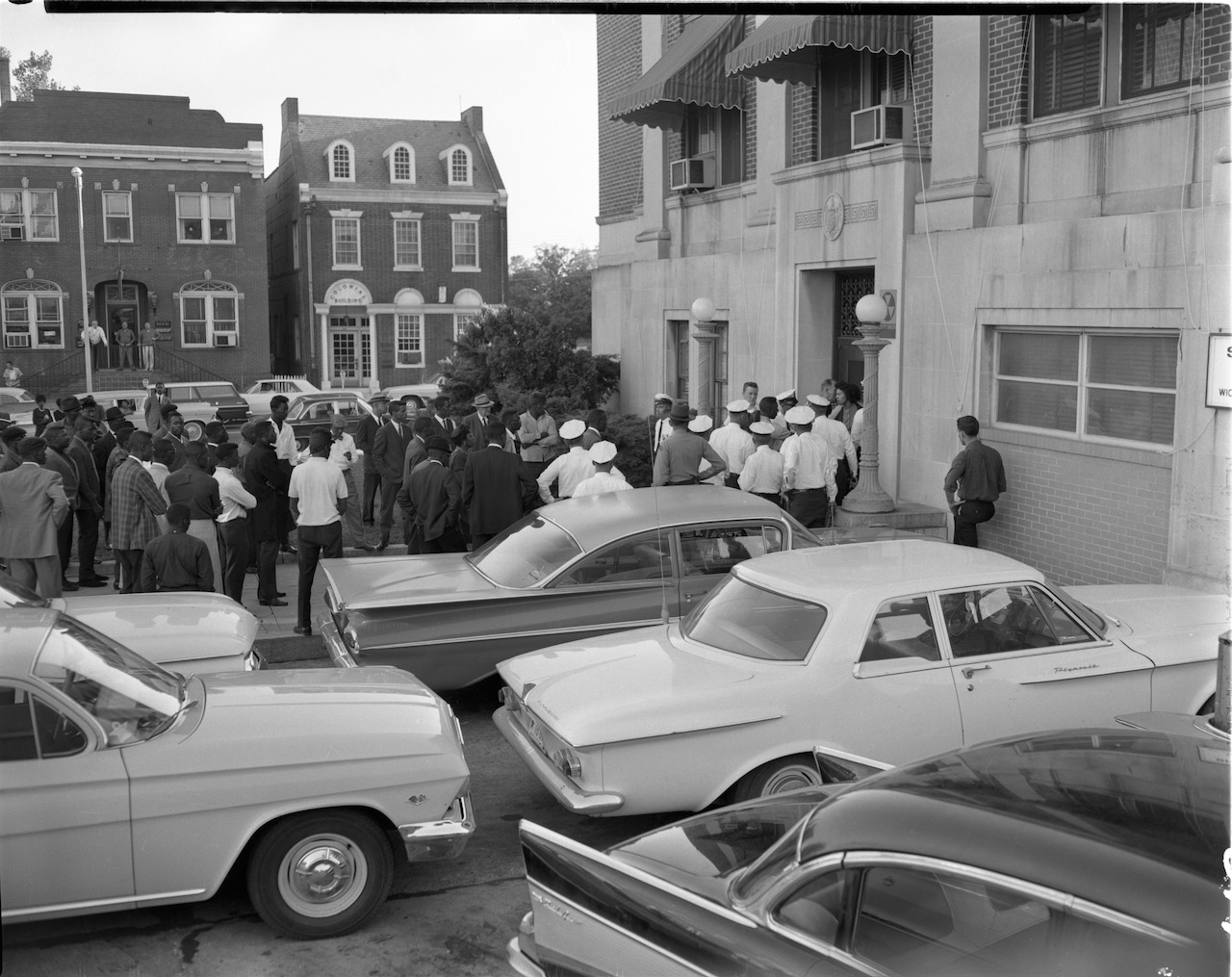 During the dedication of Lynching Memorial historical marker in May 2021, three jars of soil were collected from the site to represent the three lynching victims. (Photo from City of Salisbury, Maryland's Facebook Page) 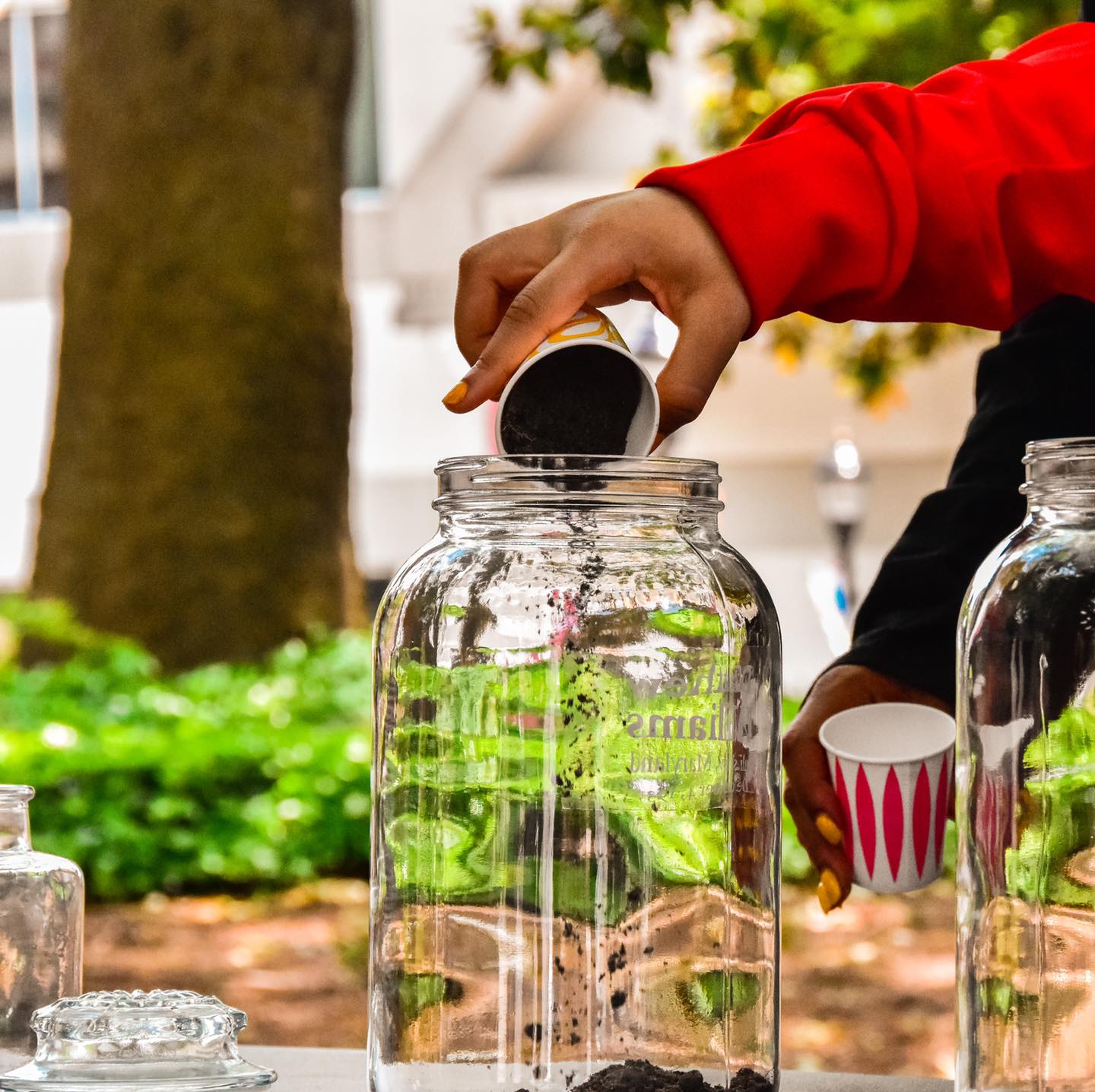 The "Lynching in America" side of the Lynching Memorial historical marker pictured in October 2021. (Photo by Allison B. Stancil) 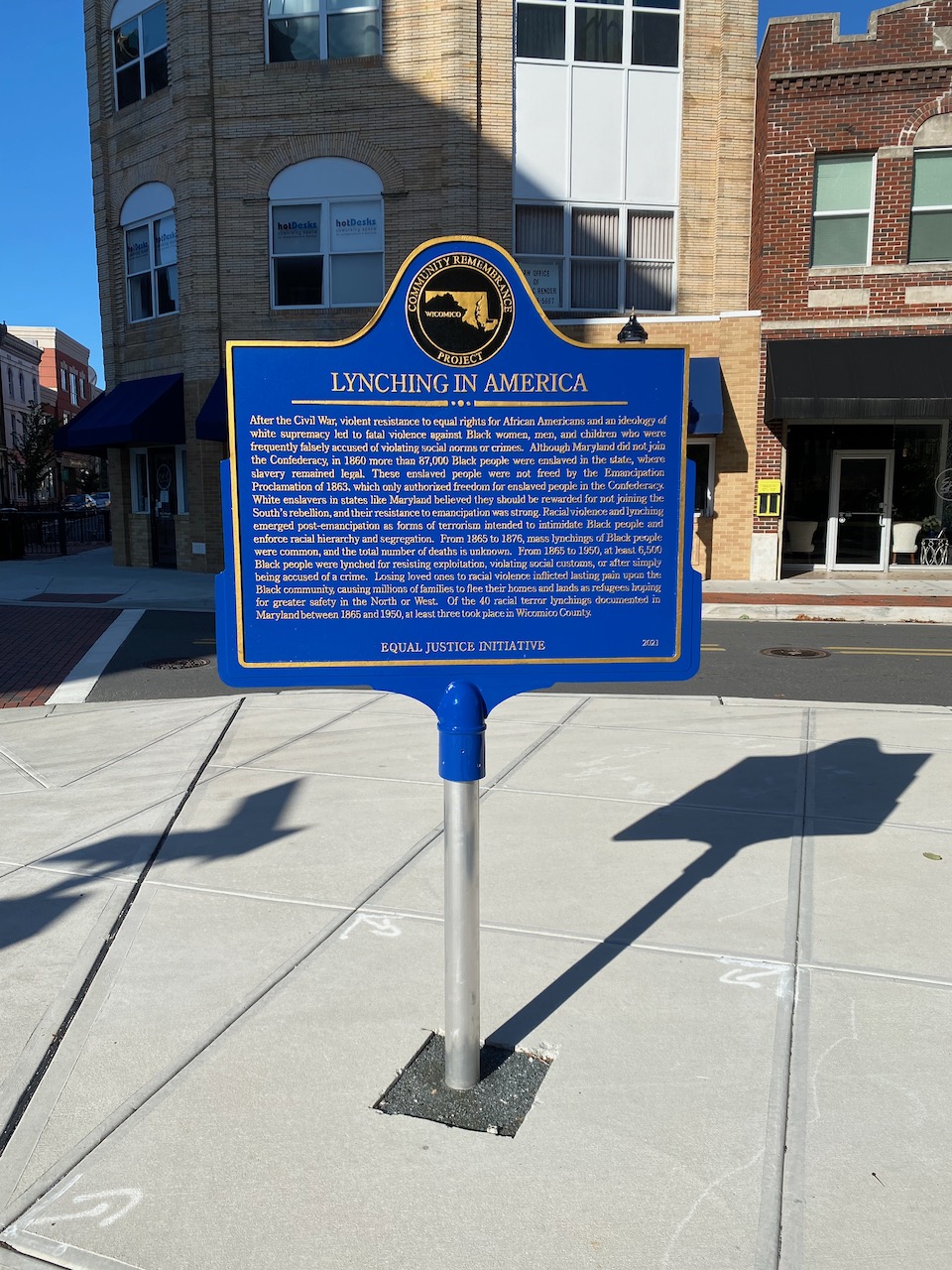 On February 24, 1880, Maryland’s most famous freedman visited Salisbury and lectured at its newly constructed courthouse. Frederick Douglass, Marshall of the District of Columbia, discussed “Self Made Men” at the event organized by Solomon Houston. Charging fifty cents per attendee, the lecture raised funds for John Wesley M.E. Church’s second story addition and renovation and was attended by many Black citizens and about fifty or sixty white citizens on their respective sides of the segregated courthouse.[1] Douglass’ lecture at the courthouse shows that while Black citizens who were deemed acceptable were allowed slight privilege and status, everyday members of the Black community faced segregation.

Less than two decades after Douglass’ visit, racial unrest led to the lynching of 18-year-old Garfield King at the courthouse on May 25, 1898. After an alleged argument with a white man in the town of Allen, King was taken to the Wicomico County Jail. A mob of 100 to 150 white men broke into the jail and dragged King out, hanged him from a tree on the courthouse lawn, and shot him at least 50 times. Three decades later, two more Black men were lynched in the city. On December 4, 1931, 23-year-old Matthew “Buddie” Williams was taken to Peninsula General Hospital in downtown Salisbury with gunshot wounds following an argument involving his white employer and his employer’s son. A mob of white men gathered at the hospital and dragged Williams from his hospital room to the courthouse where he, like King, was hanged from a tree on the courthouse lawn. Numbering over 1000 people, the white mob brutalized his body after death and made sure that Salisbury’s Black communities were aware of what happened to Williams. As a direct result of Williams’ lynching, another publicly unidentified 33-year-old Black man was lynched in Salisbury and found two days later on December 6 at College and Railroad Avenue. As the Lynching Memorial historical marker in front of the courthouse asserts, “During this era, a strict racial hierarchy prevailed in Wicomico County that enabled white people to lynch and terrorize Black people with impunity. No one was held accountable for the lynchings of these three men.”[2]

Even in the wake of these tragic events, Salisbury did little to enact change towards the treatment of Black citizens. Racism and segregation continued, with “separate but equal” treatment in schools, workplaces, businesses, and the courthouse. Black citizens were not allowed in the front entrance of the courthouse or to sit in the same sections as white visitors. At the height of the Civil Rights Movement, the shooting death of 22-year-old Daniel Henry, a deaf Black Salisbury resident, by a white Salisbury police officer led many to equate the unjust killing with the lynchings that happened decades before. After Henry’s death, violence broke out in downtown Salisbury. The Black community organized meetings and protests, including an NAACP protest outside the courthouse and a visit from Cambridge Nonviolent Action Committee founder and leader Gloria Richardson.

While protests like the ones held in Salisbury in 1968 helped change laws and end segregation, racism, police brutality, and unequal treatment under the law persist in the nation to this day. The City of Salisbury has taken initial steps to restore this broken trust with the creation of the Salisbury Lynching Memorial Task Force and partnering with the Equal Justice Initiative to create the Lynching Memorial historical marker. The dedication ceremony included a march from the hospital’s parking lot to the courthouse and the collection of three jars of soil from the site to represent the three lynching victims.